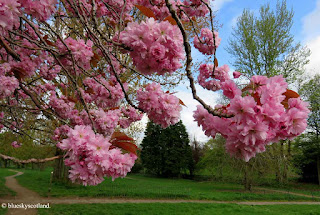 ALL PHOTOS CLICK FULL SCREEN.
Mention the Riccarton or Bathgate Hills and most Scottish/ UK folk, even keen hill- walkers, will look at you blankly. Widen it out to West Lothian and it still might get the same response- "out east somewhere" they mutter vaguely. " That lumpy patch of ground in the way between Glasgow and Edinburgh. Is that it? " 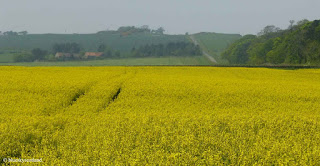 Those of us who know this area intimately however are all too aware it is a real life magical kingdom- a Scottish land of Oz. In both senses of the word. And what are the main colours we think of in May for this fair land? Gold, Red and Green of course.

Gold- for the numerous oilseed rape fields that dot this marvelous district with patchwork yellow squares and rectangles contained inside the larger triangle between Bathgate, Falkirk and Kirkliston. A five field spectacular here in the above photo. When you are surrounded by this much yellow intensity it's like sitting inside the sun. Radiant, dazzling, abundance in every direction. 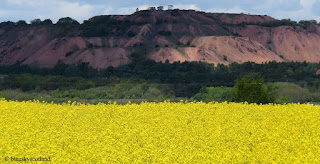 Red- for the shale oil bings that rise above the surrounding golden flat-lands like ancient stepped pyramids in far distant countries.These too are man made mountains soaring from a central plain. In this case not religion or to commune with the gods the objective but mining and heavy industry the culprit- extracting paraffin from crushed and heated rocks, once a popular fuel. Creating a unique landscape like no other in Scotland. The Red Wall. 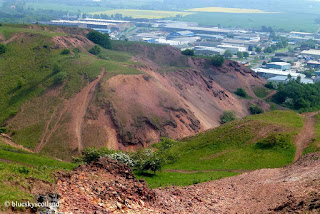 Views on top are sensational and unique. Half Scotland- half outback Australia. Even more so on a scorching hot day- and it was. The sweat was lashing off my panting princess beside me ... while I, a sporting demi- god... was completely immune .... or just road cycling fit...tee hee. 'She gleamed like a melting ice cream in the sun coming over that hill.'     comment from a passing cyclist. 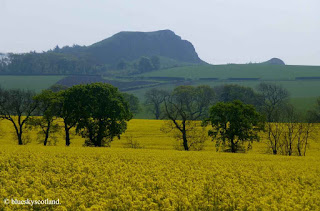 Binny Craig, a volcanic plug. I was introducing Anne into this cycling Colosseum for the first time and the only way to really see it properly is by bike. It's cycling heaven on this upland plateau studded at intervals with distinctive little hills and ridges. 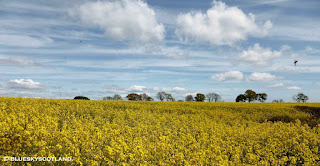 Would we manage to ascend them all in one day I wondered? 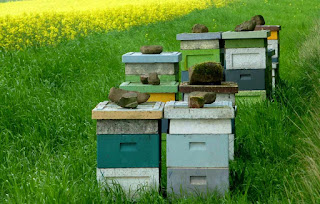 Or would the swarms of honey bees pollinating the oil seed flowers get us first. The air was alive with buzzing creatures of every description- see previous photo above. Come to think of it this one area is still oil producing- first a major paraffin extraction centre and now edible and cooking oils. 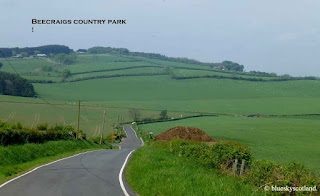 Green. Beecraigs Country Park being one of the few places to park a car to see it. A network of quiet minor roads snake out from here but views are mostly green in this vicinity. The sweet green of a witch perhaps? You really need a bike to explore it properly as any lay- bys are scarce or non existent. Which keeps it quiet and serene.

As always, you have to really work hard for gold- put in some graft and effort - over rolling scenery- on a hunt for scattered yellow veins of precious material. 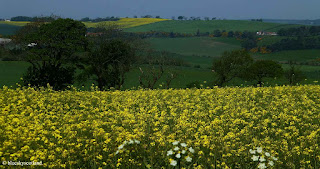 So it's always a modern day grail quest... and a good excuse to cycle or walk up any hills en route to spot out the best riches ahead. 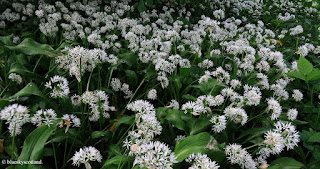 but not without its distractions and pleasures. Wild Garlic and Pink Campion in showy clusters adorn the hedgerows and deep dark woodlands at this time of year. It had to be done and ticked off. Cool shade and perfume for lunch.. if you like the smell of garlic that is. 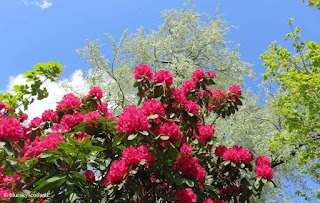 Rhododendrons and fresh new leaves bursting forth make the entire kingdom feel new born. Unfurled and as yet unsullied by munching insects and caterpillars. Mint conditions to greet Morrigan, the ancient Celtic enchantress who makes an appearance... and its no surprise. Where else would you find her but here- in enchanted lands, surrounded by the ruins of iron and bronze age hill forts? 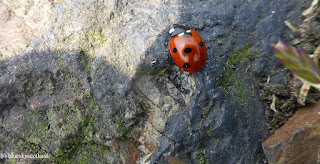 The great lady appears... in disguise :o)  a giant sized version of the species, landing on an ancient hill fort beside us. Very fitting illusion. 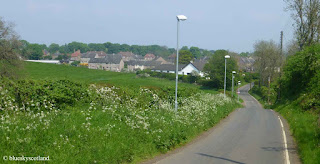 A village in Loth Lothian, a district named after King Loth you know... of ancient hill fort fame. 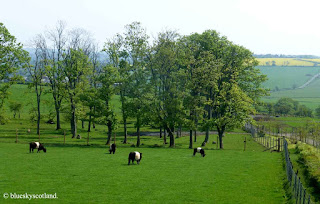 Belted Galloway cattle at Beecraigs where there are several sizable car parks...but probably full up by lunchtime on a sunny summer weekend unless you arrive early enough to nab a place. 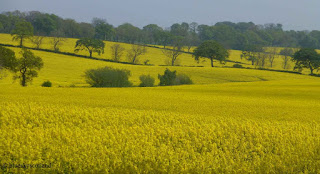 Loth Lothian. The golden lands arrive. Another five field wonder formation to touch and sniff but whose counting. " It's mine- all mine- rich beyond my wildest dreams!!!!" Lost in gold fever. 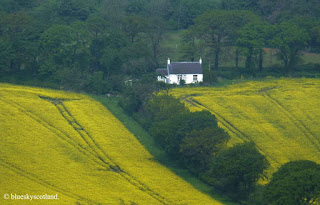 White cottage in the gold. 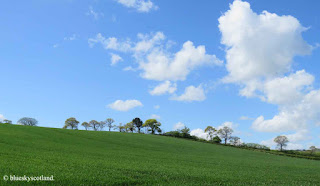 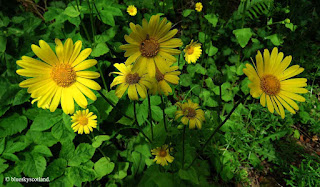 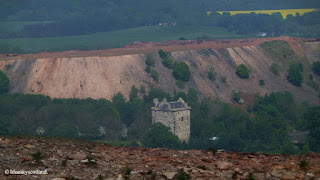 Niddry Castle sitting in the green valley between the bings. 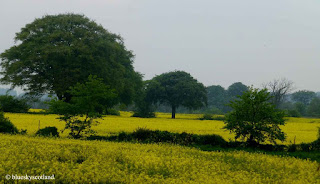 in our wonderful realm of Oz.    The golden land. 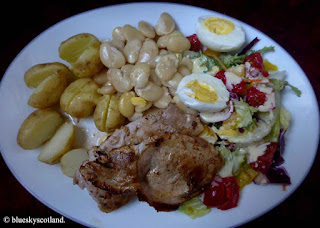 And a colourful meal to end the trip. My idea of heaven on earth.

Amazing spread of colours! I don’t know that area well at all - I always seem to be saying that to you. We’re just back from Islay. It was glorious last week.

Thank you. Same here with you Anabel for city posts... which is good because we don't overlap or cover the same subjects. You would like the walk up Cockleroy (car park at base) which is an easy short ascent... Cairnpapple Hill (lay-by underneath) easy and short again... and The Korean War Memorial is interesting(car park, short uphill circular.) All have paths and fine views from the summits. Linlithgow and the circular walk around the loch there is also an easy cracker. Only an hours drive away as well- follow M8 then off at J 4 past Whitburn.
Just as well Islay trip was not this week- weather forecast is dire. Great island but not much shelter if walking. Very windswept in the rain I remember.

I always buy rapeseed oil for cooking nowadays as it's British (still buy olive oil for salads and so on though for the taste). No idea why they call ramsons 'wild garlic' as, in my opinion, they neither smell nor taste of garlic - they're almost exactly like spring onions!

Hi Carol,
I have to use sunflower oil as R.S.O. doesn't agree with me. Likewise garlic as walking in France I used to feel sick until I realised it was because everything is stuffed with garlic there. I can take small amounts of it but not the quantities they pack in over there.

That landscape really does resemble a cloth of gold - I prefer to use rapeseed oil in preference to olive oil these days and of course it also means that we are supporting our own produce too.
We have Belted Galloways on our Common which the NT use to keep the scrub down from the sides of the hills which they do well with their stocky short legs.

I get fed up of chefs putting garlic in absolutely everything (although I do like it in moderation and it doesn't disagree with me) - it's just overkill. When I see a recipe with garlic in, I just miss that bit out. It's just gratuitous!

Hi Rosemary,
yes, I see more Belted Galloways outside of Galloway now than in it, very popular breed. Pigs amaze me as well. Skin and bone snouts yet you would think they were using metal shovels the way they can clear head high bushes and bracken into clean bare fields without seeming to injure themselves, even shifting large bounders.

Hi Carol,
when I used to backpack regularly, every summer, across Europe's mountain ranges it was something of a miracle if you stayed untroubled for the entire holiday, bum or stomach wise. On the odd occasion we went in for a meal the meat was often cooked rare( half cooked to my tastes) fish had whole cloves of garlic stuffed inside and we were also drinking out of mountain streams in remote areas though we had purification tablets every time- essential due to the vultures and water quality in hot countries. Scotland is very lucky that way with abundant fresh water in the mountain districts, year round.