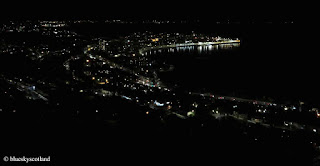 ALL PHOTOS CLICK FULL SCREEN
The coastal town of Gourock at night. All posts from now on were taken before the corona virus lock down in the UK but I have a backlog of posts to pick from. This is the second part of our North Clyde Estuary Tour/weekend. A night walk across the Inverclyde Hills and streets during the hours of darkness... 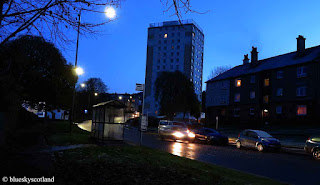 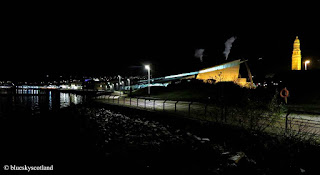 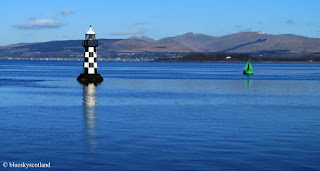 A still, clear night of twinkling stars blossomed into a perfect early spring morning of mirror calm seascapes with just a hint of snow left over the mountains. The type of day that  makes most humans feel alive, after months of grey skies, floods, wind and rain, but something of an ordeal now given the current situation. Maybe nature is taunting us. And she has every right to do so. 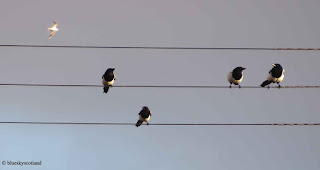 Musical notes with magpies. Can you guess the song though? It's a happy tune. As far as I know most wild creatures can't get the corona virus- only humans- maybe pigs, rats, and bats. Very bad for the economy, business, and people but if there is an upside and a winner in all this it must be nature itself. 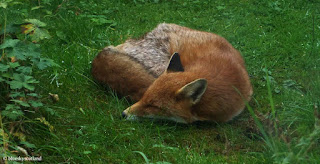 Sleeping wild fox. With over a million dead creatures in Australia recently due to bush fires, forests the size of small countries decimated, and a predicted 30 to 50 years worth of fish left in the oceans it's about time nature got a break to recover- and this might well be it. At least for the short term. Can a killer virus be a saviour for some? Instead of 'bounce back'- the bite back. 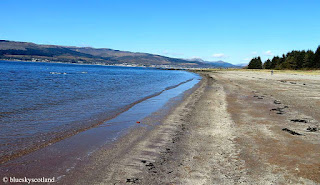 All the protests about climate change tend to fall on deaf ears at the top but maybe now things might change faster with humanity forced into a wake-up call. I can't think of any protests that would successfully ground planes worldwide for months on end but it's happened now. Just a guess but I'd imagine this might be good for the planet. Millions of restaurants, seafood cafes, and fish and chip shops shut should mean millions of fish and sea creatures still safe in the oceans- they might even have time to breed for a few short months before things recover back to normal. 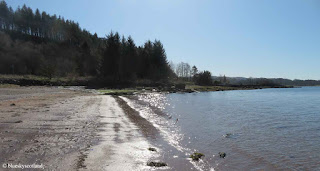 With this happy thought we set off for a beach walk along the shores of the North Clyde Estuary---- and the wildlife seemed to agree... as we saw lots of it.

Sssssnake bird on a boulder. 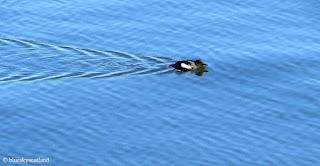 Black Guillemot. A small diving bird that's equally at home swimming between icebergs in the arctic ocean as around the Scottish coast. Given the mild winter this must feel tropical yet a family pod of killer whales created a stir recently when they entered the Firth of Clyde on a hunting foray, being spotted off Greenock many times before they departed. 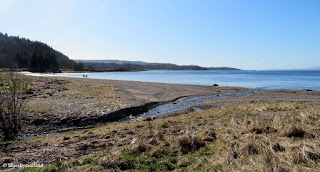 A series of beaches and flat rocks lead to Inverkip. A perfect morning. 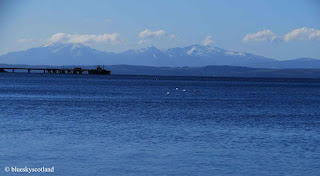 A distant view of Arran. 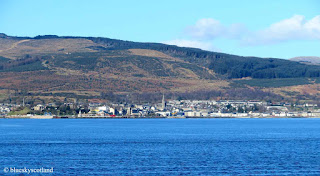 The town of Dunoon across the water. 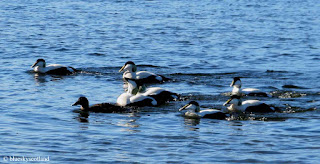 Maybe it's for her. Rafts of eider ducks dotted the calm seas in full mating ritual. One female surrounded by seven strutting males. I've seen similar situations with humans at times where a single beautiful, usually well endowed young female finds herself followed relentlessly everywhere by a  group of teenage admirers. Butterfly and nets.  Like sudden fame, not a situation every girl would appreciate or be happy with I'd imagine, being found attractive and desired by almost everyone else in a room or while attending any event before you've found yourself and your inner confidence as a person and maybe drawn into a hard to manipulate for your own benefit roller-coaster of lifetime emotions- a  hectic existence of potentially constant relationships and ever eager future partners with little opportunity for self discovery or time on your own. As with certain landscapes, towns, and cities worldwide, great beauty can often be as much a curse as a blessing. But that's just my view. A lucky few can use it to their full advantage. 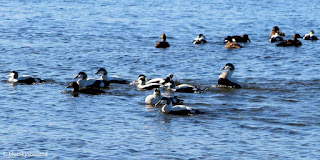 And with a bunch of other females nearby, getting far less attention, maybe she encouraged it herself in some way. Who knows. 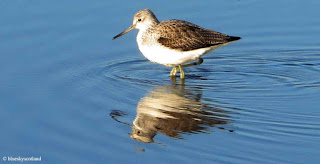 Like humans, some animals do not mind being by themselves, and the corona virus lock-down  and social isolation will be endured with relative ease. A normal day for them. Greenshank wading. 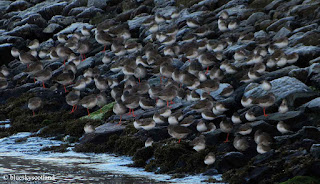 While others will suffer without company. Redshanks here. 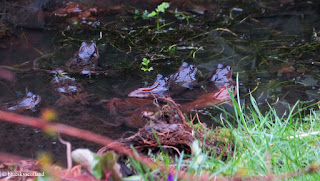 Frogs in a puddle. But if you want an uplifting thought at this potentially stressful time... most of the natural world over the next few months will do perfectly well without us. Maybe even thrive... free from human disturbance and exploitation for once. And the planet will be healthier as well. There is an upside. 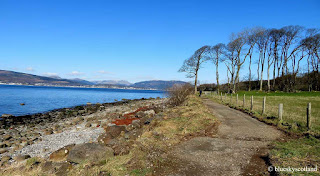 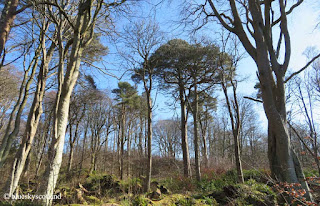 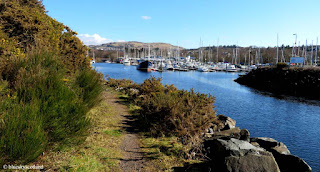 and the Kip Marina. 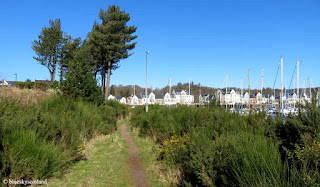 A beautiful spot on a sunny day. Tropical in fact. 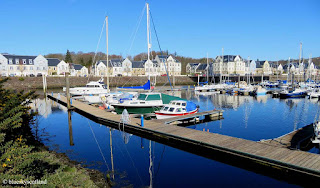 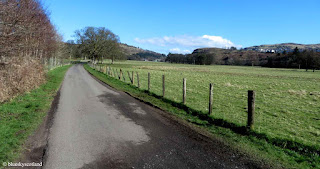 A pleasant and scenic gem throughout. 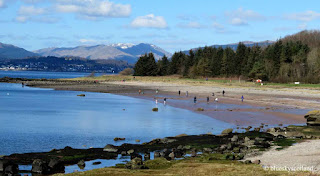 The beauty of the North Clyde Estuary on a sunny day.

Some really good wildlife images there Bob - a sleeping fox is a rare treat! You're correct, those are Jackdaws with the Oystercatchers. Looked a fine day for a walk :o)

As it's very suddenly dried out around here, most of our frogspawn is unfortunately completely dried up and non-viable. Shame as I love frogs.

The climate may be getting a rest from vehicles but single use plastics has increased for one thing - there are lots of other problems for the environment during this crisis.

How on earth did you get the sleeping fox photo? A brilliant zoom? How come it didn't wake up?

It looks as if my Freddie has been visiting you too. We watched ours sleeping peacefully from the bedroom window, but as soon as I opened it to take a photo he opened his eyes and was off like a shot.

Lovely pictures, I know most of these places well. I like the way you’ve linked it to the current pandemic and climate change. Our problem is we confuse saving the planet with saving ourselves. The planet will get on just fine without us.

Hi Carol,
My zoom is knackered at the moment and I'll need to wait to get it fixed. Ten feet away. Patience and fox whispering....Or magical thinking.

Hi Rosemary,
I was just lucky I got a tired version. Not even an ear twitch so I did not disturb it. Probably just glad of a rest after weeks of rain, bad weather, and limited feeding opportunities.

Hi Anabel,
It's a great circular walk that one on a sunny day. More coming up next few weeks.

Stunning images there, like everyone else that fox image is amazing. I know they are actually pretty common but I'm always pleased to see one out and about. They are such beautiful creatures. Like you I have a hope that this crisis will have some benefits for the natural world, maybe a naive hope, but hope nonetheless. Keep the historic posts coming. I was trawling through my photo collections from years back and plan to put up some old stuff from the 90's and before! Take care.