Alta Via 2. Backpacking across Italy's Great Rollercoaster Route. Part One.

Around 10 years after doing Italy's Alta Via 1 with John and Brian I had the opportunity to do the Alta Via 2, this time with a larger group from the mountaineering club- consisting of Scott, Julian, Graham and Paul. Unlike the Alta Via 1, which once it gains elevation tries its best to stick to a level height throughout, weaving past, under, or through the various massifs it encounters ( like a mouse finding the easiest line between tall shoe boxes) the Alta Via 2 takes great delight in tackling any large mountain it encounters head on- straight up one side then straight down the other. This means a lot of extra effort and a roller coaster hike overall. Two weeks to walk 160km or around 100 miles in length, walking North to South, from near the Austrian Tyrol border at Bressanone/Brixen to Croce d' Aune, near Feltre. Close to a total ascent for the trip of 40,000 feet with a similar descent- almost 80,000 feet combined of knee grinding effort during this hike... as we climbed the Marmolada, highest peak in the Dolomites, as well. 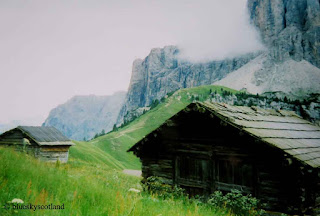 Mountain cabins in the Dolomites. For this reason, and being the oldest in the group by 5 or 6 years, into my frisky 40s by now, I decided to strip the backpack weight right down. No gortex rain jacket, ( too heavy) no expensive via ferrata kit or climbing harness, just three lightweight slings and three lightweight screw-gate carabiners to fashion a DIY harness and V.F.kit myself, no rope, no helmet, ( I would either solo everything or just avoid any obstacles in the way, (hopefully), confident now as an Alpine and Dollies veteran I could do that.) 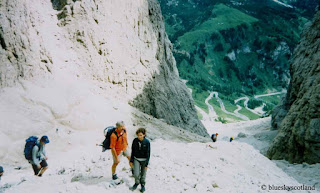 This is typical of the Alta Via 2- a brutal ascent up a mountain massif from the hairpin bends road pass, which in itself climbs to an impressive height. Then a short level walk through amazing mountain scenery... 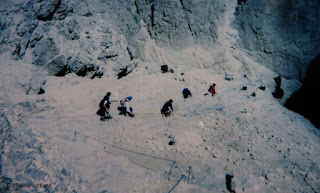 then straight back down the other side. These photos are not in strict order as after 20 odd years to match them precisely as to when they occurred on the trip is asking too much from my memory but I've tried to place them roughly in sequence as a beginning, a middle, and an end. 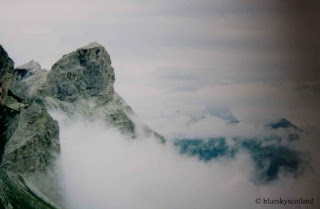 I remember the first few days we had on this trip did not match my expectations of a sunny Dolomites. Glasgow fair fortnight again so mid July and we got similar weather here to a Scottish summer in the high mountains. A real mixed bag of elements.  Mist at all levels, glimpses of mountains, really cold mornings, sticky, humid afternoons, always damp, frequent showers. I began to regret leaving my waterproofs behind, using a black bin liner instead, but it was so uncharacteristically cold it was the extra heat of a thick jacket I was missing rather than for any rain protection. 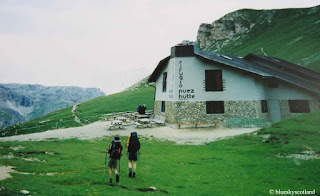 As usual we were camping and cooking ourselves,  but usually near a mountain hut where we could head every evening to relax inside or on the veranda and get a few pleasant beers. It was a saving of around £200 doing it this way... but we also just preferred the camping life, being Scottish and used to it. 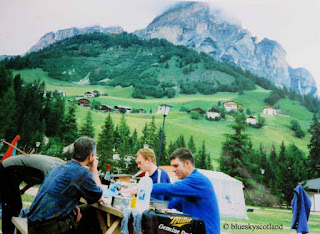 This was the height of luxury and comfort for us... a picnic table for breakfast in a valley campsite on the Alta Via 2. A low level blip in an otherwise high level hike. Time to wash clothes and socks, get showers, stock up on supplies for the next section. 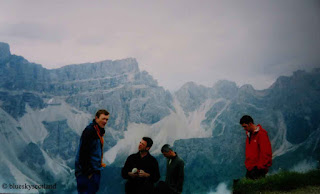 Then back up into the mountains again. Still cold- still misty up here. 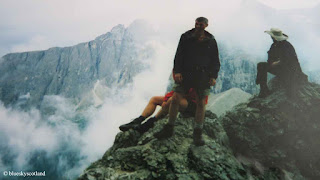 No idea what mountain this is... even at the time we didn't really know, summits just glimpsed occasionally and guessed at in a sea of swirling cloud. 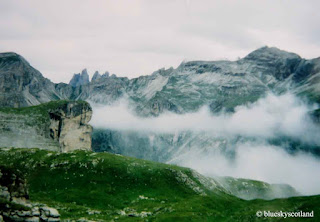 Early morning mist in the Dolomites. 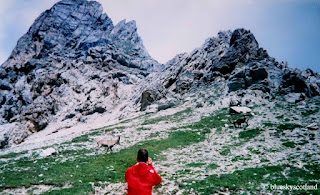 Scott spots some Alpine Ibex and takes a photo. 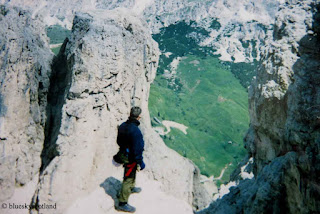 And then a few days into our trip the miracle we had been praying for finally happened... it cleared up... and the sun came out... 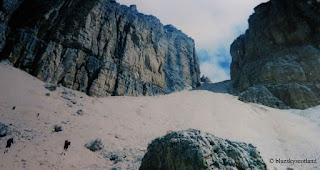 Makes all the difference when you can see the landscapes you are travelling through. And in the Dolomites they are always fantastic.        To be continued......
As we didn't really see much on the first four days of our trip here's a link to a brilliant short video of the route.
I picked this one as it highlights the fun and sheer enthusiasm of being young, having adventures together in a group, and feeling invincible and immortal at that age. You tend to forget you were ever like that when you get older and the world gets less fresh and intense to your eyes and senses.... so this is a joyful window to that past age in any human life story. Your younger self.
Link here. (In a new window for Carol)   Best watched full screen. There is no other area like the Dolomites.
https://www.youtube.com/watch?v=5mDirSKzIl4
Posted by blueskyscotland at 12:39

I suspect that these posts are probably making you feel very nostalgic for the wonderful times that you spent in these European mountains along with your friends.

The video was fun. I’m kind of running out of ways to say elk though!

That was supposed to be eek. I saw no elk 😉.

That steep (and presumably loose) ascent and descent in your photos didn't look my think. I'd like to try a via ferrata though.

I thought I'd best watch the video after your comment! ;-)

my thing that is (not think). Typos seem to be a thing on this post ;-)

Hi Rosemary,
Only posting these as they are far better than the walks I'm doing locally with the lock down still in place but they are inspiring me to have, hopefully, some more adventures in the future before I snuff it or get too old to enjoy them fully.

Cheers Anabel,
I watched a few A.V.2 videos, mainly to refresh my memory, but that one made me smile and was the best.

Funnily enough Carol,
I don't remember much via ferrata on the AV2 at all unless I soloed past it- nothing hard anyway- and although I've done the AV2 and climbed the Marmolada I couldn't remember the summit of that much either :o)
Something to be said for scary ascents like Monte Pelmo is that you never forget them.

Proofreading books is one of the hardest things I've done... you can read any chapter
20 times and still find mistakes in it. I can read books for pleasure no problem but proofreading is very different and takes a certain type of person to do it for a living, scanning line by line and word by word meticulously. It certainly put me off writing any more.

How lucky are you to have been to such a beautiful spot in the world? Gorgeous photos, as always.

I didn't mean you'd made a typo - I meant me and the gal above me on the comments page both made one LOL!

And yet more reasons to strengthen my need to visit the Dolomites. Scenery is just amazing, so much rock.

Cheers Andy,
wait until you see the next video. It is truly mind boggling.