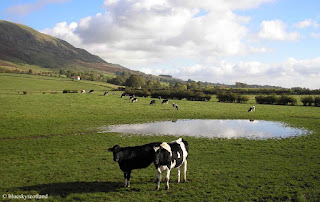 ALL PHOTOS CLICK FULL SCREEN
A herd of cows near Clachan of Campsie. Looking at the OS Landranger Glasgow map one day years ago, having done most of the best and more obvious walks on it I spotted a circular route running under the high wall of the Campsie Fells then up via Maiden's Castle and onto Cort-ma Law. It turned out to be a cracker of a route. A highly enjoyable and very varied outing- which is where the post title comes in. Often day long 'moments of pleasure' are reflected in these photos. 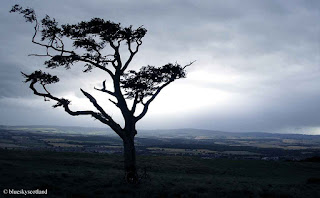 A lightning storm over the Garleton Hills in this one. I'd not long discovered the wide open beauty of the Garleton Hills, a small insignificant range of grassy knolls east of Edinburgh and after my initial brief visit to climb the Hopetoun Monument with friends as an add on to a bigger hill day we'd already had.... I fancied going back myself to do the full range. I did not intend to traverse this little known, low level range during a summer thunder and lightning storm but that's exactly what happened. Luckily the surrounding and higher Moorfoots and Lammermuir summits captured the brunt of the lightning strikes and flashes leaving me untouched, completely dry and able to enjoy the show. The majesty of nature at its finest is always best if you are not soaked and freezing cold under it as I had very little shelter nearby to escape any rain if it came my way. I'd rolled my bike over the hills as it was part of a day long cycle tour of East Lothian and a couple of hours later I was cycling along a vast open beach in bright sunshine. Another great day out. 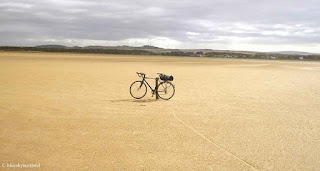 The beach in question was at Gullane then onto this place, cycling across Aberlady Bay. Garleton Hills now firmly in the distance. One thing I have found post social media and Instagram is how busy most beaches have become in the last 10 years. 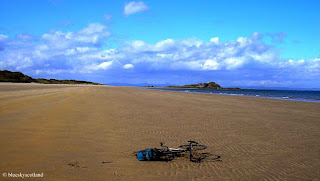 Here's another east coast beach not that far away from Gullane. The aptly named 'Broad Sands.' Again on a bike and again deserted ... which is a big part of the fun for me... like being the only person on the planet in your imagination as you bomb along at speed over the hard packed surface. ( obviously avoiding any birds ahead and giving them plenty of space to co- exist and stay still sitting on the sand. It's a wide beach -you can easily do that.) A desert island drifter with Fidra in the background here. Inspiration for R. L. Stevenson's Treasure Island. I used to walk or cycle regularly along numerous Central Belt Scottish east and west coast beaches and hardly see anyone else around but now they are frequently busy, even mid week. Call me elitist but for me it's not the same vibe as before. I don't mind crowds just not in the wilderness. But I've had my allotted time on an emptier planet already so I can't complain. 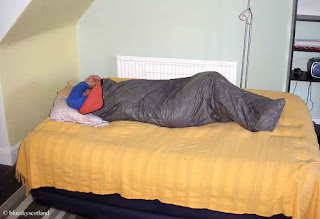 Alex is not usually a morning person after a night in the pub. A racing snake greets the new day in a climbing hut years ago.... or maybe a slow worm on this occasion. The right colour of bag anyway. 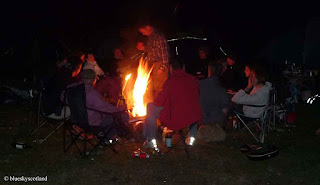 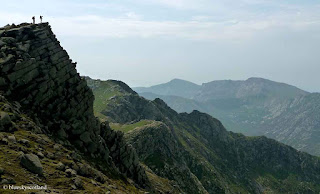 A solo day out on the Arran Ridge years ago. Early 2000s. Very quiet for most of it with only these two other hill-walkers encountered. 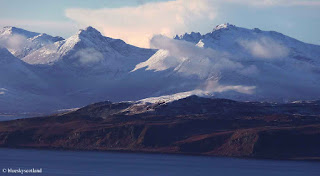 The Arran Ridge from Great Cumbrae in mid winter. 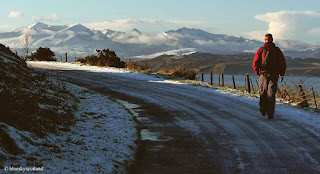 Minor road covered in sheet ice so no cars on it to trouble our walk. It's rarely frequented anyway this minor road, even in summer. 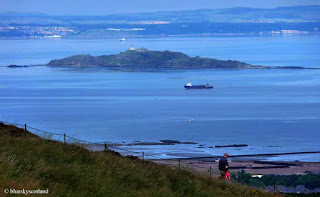 Walkers descending Arthur's Seat in Edinburgh. The easy side of this extinct volcano has excellent views over the Firth of Forth and its handful of islands. 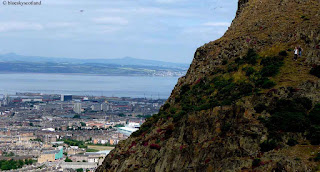 Many tourists are surprised however just how steep the other side is and this harder end of vertical cliffs can catch many folk out, especially under snow and ice when walkers go up it under equipped in street shoes and limited warm clothing. For its modest size- 800 foot high and in the middle of a city- it can occasionally bite the unwary. A proper little mountain. 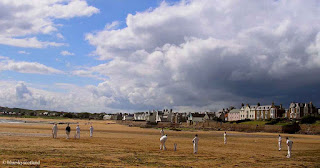 Beach cricket at Earlsferry in Fife. Afternoon summer thunderclouds arriving after a hot, sultry morning. Beach walking again for me. The era of 'Captain Coastwalk' when I was bagging new Scottish  beaches and remote clifftop walks most weekends in the 1990s, usually on my own. A somewhat derogatory and condescending title by those still addicted to mountains and hill-walking to the exclusion of anything else. I didn't mind one bit as I got to know Fife really well- an extraordinary and ancient kingdom filled with surprises round every corner.... including village cricket teams and sea queens, more unusual sights here and a richer visual tapestry of settlements and long traditions than on the west coast, where many of the original inhabitants of the various districts and Highland glens were moved elsewhere or emigrated abroad. 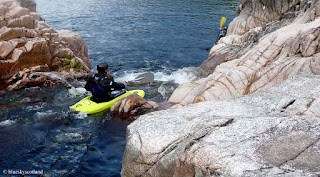 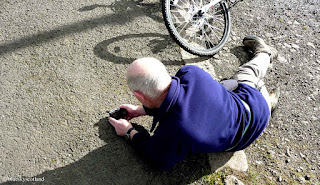 Caterpillar and a dedicated photographer. 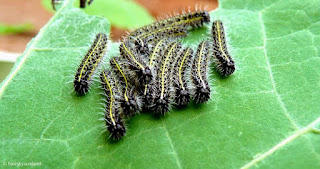 Not bad but here's one I made earlier.... roped then tamed them into a line. That's real action photography, small scale. Yeehaaa cowboy! 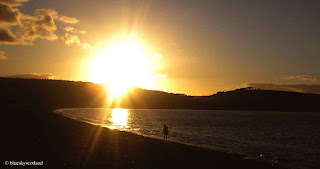 A mystery girl on the shore.....  but who is she? My 'princess of suburbia' perhaps? 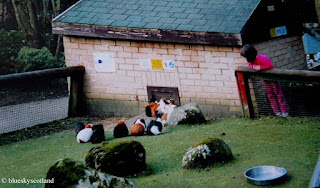 Waiting and watching. Feeding time at the children's zoo many years ago. This girl is now a responsible young adult in the world of work. The guinea pigs have sadly passed away. Sniff sniff..... 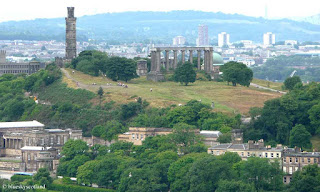 Calton Hill in Edinburgh from Arthur's Seat.
As I'm in a playful mood here's a playful little number. A horse race through a city. Fantastic modern artwork done with great style and imagination. Best watched full screen. This is worth looking at. The distilled essence of 'cool' in visual form.
https://www.dailymotion.com/video/x5fk523
Posted by blueskyscotland at 02:13

After I got struck that time in the Aran mountains in Wales, whenever it thunders now, I bolt straight down off any hill I'm on. I once watched a spectacular 1.5 hour thunderstorm where the lightning repeatedly struck the hills I'd just bolted down from from the safety of a convenient barn. I'd been a few minutes from the first summit of the ridge when I'd bolted back down. I had to go up in the evening and do the ridge from the other end when the storm abated. Thank God for Little Chefs back then as, when I arrived back in civilisation just before 2200 hours, they were still open and did me a great meal.

you would if you'd been struck. Actually, strangely enough, I fear it less since though - I think my mind thinks I've had my turn now... maybe it's your turn next time? ;-)

Cracking selection. I’ve not even heard of the Garleton Hills. As for that Rolf Harris image, it’ll be hard to shift!

Hi Anabel,
they are very close to Haddington and worth a visit if you are in the area to climb up to the Hopetoun Monument, which at the time I did it was open to ascend right to the top- easier with a torch as it's a pretty dark spiral staircase.

I still fear it not- certainly not after Italy and the Pyrenees with over 100 strikes occurring all round us in a normal July evening, camping in the mountains. If it didn't happen then it just proves Jesus loves me!
Riders on the storm.....

Fancy dress AND a Conga line, you guys sure know how to have a good time! (Others might think I might be making fun, but honestly, I would love that!)
And I even know who Rolf Harris is!

"Captain Coastwalk" - made me smile this morning :)