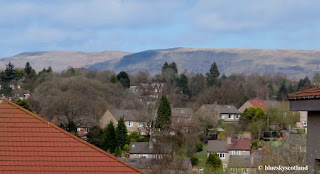 Photo taken near Anne's house. The Campsie Fells and Bearsden from High Knightswood. Looking for someplace different to walk locally a couple of weeks ago at the start of what appears to be one of the sunniest, driest April months on record in Central Scotland I thought I would start near Westerton Train Station. This would allow me to climb several of the cities many drumlins ( small hills) at once and also visit a place I had never properly explored. Some of the remaining fragments of the once impressive but private Garscube Estate that used to run between the Campsie Fells seen above, through Bearsden, also seen above, to the Glasgow outskirts. 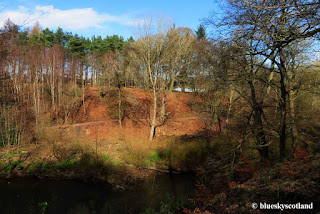 River  Kelvin Gorge. Garscube Estate.
This takes in both banks of the River Kelvin, Dawsholm Park, The West of Scotland Science Park, The Vet School, The University of Glasgow ( Kelvin Campus) and several other areas. 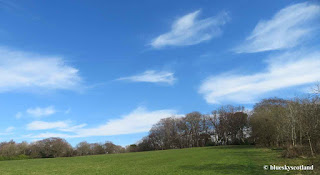 As it's been very dry and sunny all this month since the start of April it was another perfect blue sky day. 24 of them so far in a row and no rain in sight. Unwatered gardens are now dying and thirsty. Lawns are turning brown in the heat. Popular car parks are usually packed out every day, unless you get up very early... which is why I ended up here. Peaceful and quiet. Just me and nature. As always.

Glasgow. Another perfect day in earthly heaven thanks to the UK's (4th or 5th depending which online stats you read) largest city which is situated in a bowl, mostly covered in concrete, and so burns off clouds better than the outlying countryside can. A micro climate effect I've seen in action many times over the decades with an often perfect circle of blue appearing over the built up districts doughnut- any clouds pushed back to the very edge of the ring of encircling hills. There the sky-scapes, (with an encircling landmass rising between 500 to almost 2000 feet)  gather and hold onto any clouds while the central city depression, at around sea level, disperses them. Another reason I love cities. Good thermals within them to punch a hole. 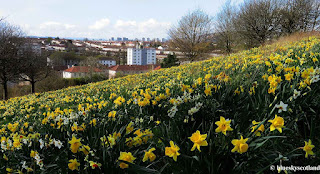 Since the start of this blog thirteen years ago I've noticed many other blue sky titles appearing but they usually mean something entirely different from this one. For me it's still one pure unadulterated love affair. The rush I always get waking up to a perfect blue sky day- often completely unsullied in the morning or with a few fluffy clouds drifting across it by afternoon. To the extent where, in my free time, I'm reluctant to explore outdoors in anything else. Hence the name of the blog. Still does what it says on the tin/label.    If it's grey- no way. 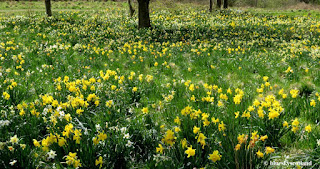 A sea of golden daffodils for a creature made up entirely of honey and sunshine, on this particular morning anyway... i.e... me. 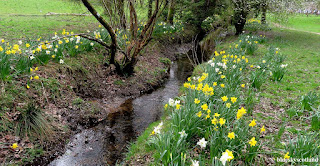 The simple beauty of a small stream in Springtime.

The sparkling path through the woodland realm of Knights. 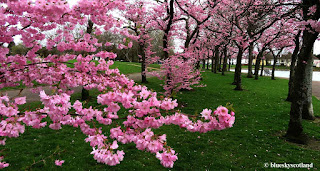 The magical colours and scents of Spring. 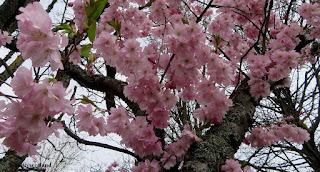 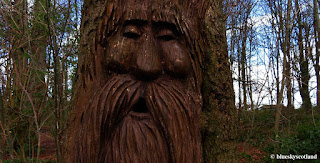 The old man of the woods. 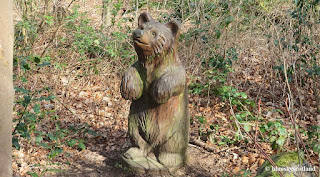 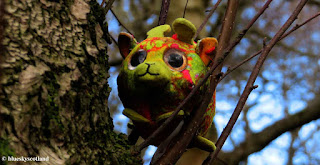 Putting the bears in Bears-den. 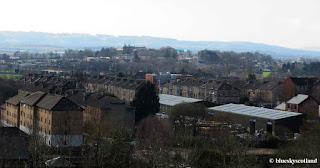 Various drumlin views from districts ending in.... hill. Anniesland and the green spires of Jordan-hill College. 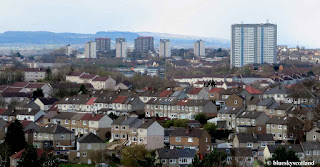 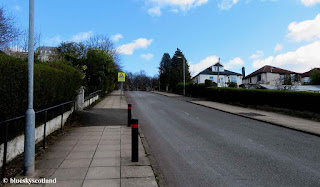 Climbing yet another drumlin. Small but still tough after a few completed already on a warm to hot day. 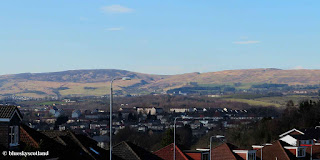 The Kilpatrick Hills view. Not a drumlin but an encircling city range. 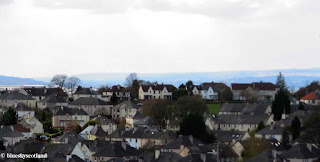 Part of High Knightswood district. Yep! Another drumlin by the looks of it. 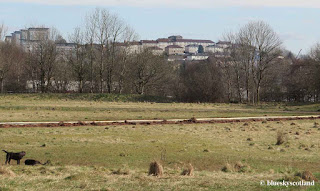 Heading for Drumlin no 3 . Gilshochill/Maryhill District. 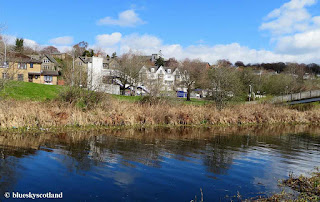 ....and then back to Westerton Train Station on the Forth and Clyde Canal. Note the clouds over the Campsie Fells here, a long wall of cliffs close to 2000 feet high yet clear blue sky directly above, over the city. High ground creates its own weather system/ micro climate, along with rivers, woods and sea. At certain times of year it can be sunny inland yet misty/foggy at the coast or lingering mist pockets along river valleys, deep hollows, or woods that take ages to burn off- all due to temperature differences or upward/downward thermals of a few degrees. Something that glider pilots and large birds take full advantage of... soaring higher over certain fields that give off heat, sinking lower over woods, marsh, and river. 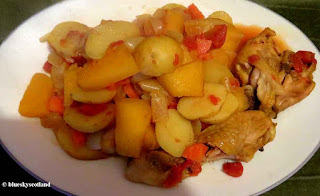 I lived on a Drumlin in Milngavie.
I have just heard that the mountains of Mourne in N. Ireland are on fire due to the dry weather. Our garden soil has turned into something resembling concrete, we desperately need rain. It is awful for the farmers whose crops might wither and die very soon without rain.

I bought a car-load of parts for my motorbike off a guy in Bearsden - only time I've ever been there!

Your theory on a city in a bowl's effect on weather is pretty sound - did you do environmental science? I never thought of it burning off the clouds though - just knew about the 'heat-island' effect and that hills attracted the clouds to them instead. Must go back to Bradford and see if it's working there - that's in a deep bowl too - explains all the flooding it's had in the past!

Hi Rosemary,
Seen that on the news tonight about the Mourne Mountains, A lovely area. A lot of these fires are started by humans as the ground is tinder dry, either deliberately or by accident, hot car exhausts touching grass, glass bottles tossed away, BBQs, campfires etc. Sadly it happens every year now, everywhere, whenever there's a heatwave. Hill ranges around Glasgow get them as well most years.

Hi Carol,
Neeps is mainly a Burns thing when having mashed turnip with haggis. There's an entire range of olde touristy sayings/ expressions that few modern Scots ever use in real life like 'having a wee dram' (only folk with money can afford malt whisky these days when vodka is usually half the price.) and loads more twee Scot-isims that most Scots never use. "Och aye the noo" "See you Jimmy" etc etc...
E.S? No. I just did what most Victorians managed to do. I observed nature in action and worked it out by looking and thinking about it. Bradford looks a nice place- very green and up and down landscape. Glasgow is not usually prone to flooding, that's mainly in England in recent times.

I recognise the Cairnhill Woods bears, but not the tree creature. Is that from there too? Will have to look more closely next time if so!

Drumlin, that's a new word for me!
What lovely photos, I am like you, give me the blue sky!
Even in the summer here and the heat, we will sometimes have a hazy sky instead of a blue one. April just doesn't last long enough for me!

Yes Anabel,
Nice woods, what remains of them.

Hi Kay,
USA has famous drumlin clusters as well. Boston Harbor, Upstate New York, New Hampshire. Like large scale egg boxes upended it makes for a very distinctive, usually scenic, landscape. The city of Glasgow is covered in them so they used a strict grid pattern street layout for the city centre to cope with all the ups and downs which I think I'm right in saying inspired American cities as well- most famously New York itself. As Michael Caine might say " Not a lot of people know that."