The Bridge. Ra and Isis. 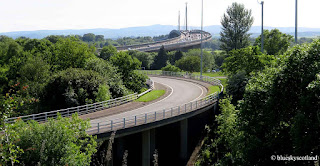 As it is light until 10:30pm in June and July in Central Scotland at the moment I've been taking a few evening walks with Anne and sometimes Belinda as well. Ostensibly 'dog-walking' to find new local areas instead of the usual run around the block that even little Snapper is fed up with has turned into a very enjoyable series of outings... and as Anne had not walked over the Erskine Bridge for many years  she was up for that next. Erskine Bridge slipway above. 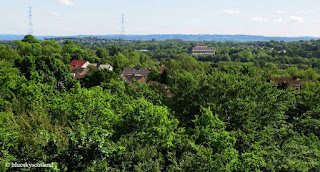 At 200 feet in the air it also provides good views. Old Kilpatrick and Erskine here mostly hidden by trees. 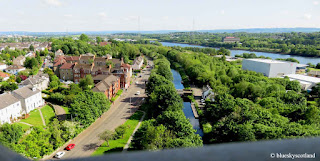 Forth and Clyde canal and River Clyde view. 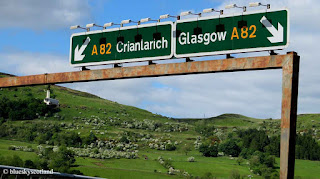 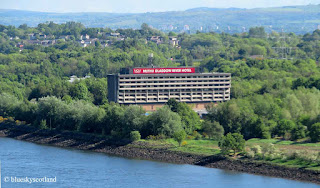 When Erskine Bridge opened at the start of the 1970s and the new town of Erskine expanded from a village this hotel was opened by Esso. Then it became the Erskine Bridge Hotel. Now a European hotel chain has taken it over, (unfortunately during a worldwide pandemic), mixed reviews online, as the building is dated by its architecture but it does have nice country walks in every direction, is reasonably priced, and with a car you can reach Loch Lomond, Ayrshire's sandy beaches, Inverclyde, plus the Firth of Clyde islands in an hour. ( excluding 10 min and hour long crossing ferry times that is, depending on which island visited.) 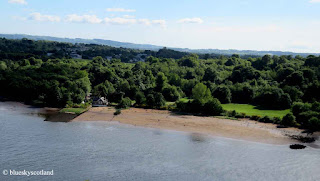 Erskine does have a small sandy beach, seen here, right beside the old ferry slipway. 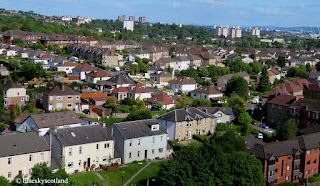 Anne enjoyed the voyeur aspect of looking down on all human life from here... like a friendly Goddess... so I became Ra.. and she was always Isis, hence the post title. Fitting, as a surprisingly large percentage of things in modern life we take for granted today as completely familiar come directly from Egyptian, Roman, or Greek culture and as the latter two were heavily influenced by Egypt and Alexandria it all stems from there... though, as far as I know, Alexander the Great never reached  the Dumbartonshire town of Alexandria to name it in his honour. The building blocks of European and North American society however still retain many direct links to that ancient culture- everything from money, to buildings, names of well known sports teams, scientific descriptions/labels, and food. Products we see or use every day in advertising or normal day to day life 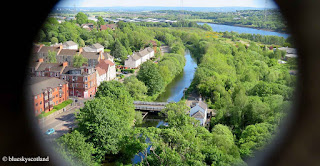 Taking photographs through the eight foot high suicide railings and mesh can be tricky but it does provide artistic snapshots of the world below. A bird's eye view in fact. 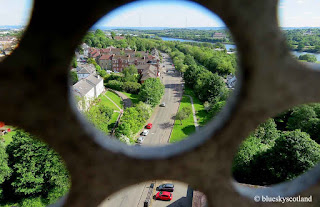 Quite pleased with the result here as I always try to be arty. Aspirational? Moi? In the distant past I've shopped in Sainsbury and Marks and Spencer I'll have you know... striving ever upwards from the lowly base of my eternal pyramid, though my working class sensibilities would never allow me to put a foot inside Waitrose. That's too much to ask :) 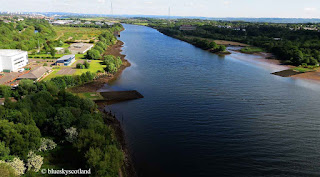 One showing the River Clyde and the old Erskine Ferry slipways redundant since the bridge opened in 1971. 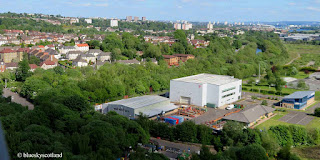 View towards Clydebank and Glasgow. 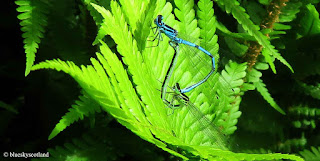 We then did a short stretch of the canal and spotted damselflies. Unlike dragonflies these are not easy to see, being slim and much smaller, flying mainly below waist height, often over water. In fact most adults can walk along a canal or through a marshy field and never notice them as normally you have to be still and get your eye in. Even when you are deliberately looking for them it is not always obvious they are there. 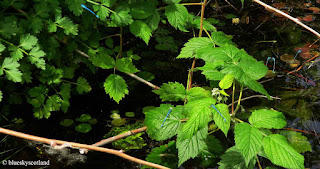 That's why I think they might, in part, be the origin of fairies. 'Away with the fairies'  might well describe anyone in a summer field in days of yore, who, instead of getting on with the endless toil of work is standing or sitting quiet watching tiny nature instead. Also children often see them first as they have sharper eyes and are closer to the ground. Loads in this photo but only obvious once I'd stopped moving and sat down to see them.

One on a fern. 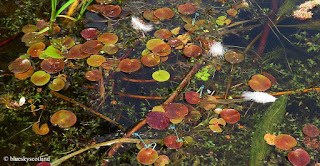 Egg laying in action. Males are blue, females underneath are yellow/green and are dipping in the canal to lay eggs, I think. At this point a beginner kayaker fell in nearby and we had to haul him out as the bank at this point was either heavily overgrown with thick vegetation or rounded stone exits with no holds. Took a lot of pulling, effort, and coaxing to get him out eventually and that scared away the damsels with all the splashing and movement. Although grateful to be rescued from his predicament/dilemma  he did not seem that interested in tiny nature all around him and said so in words that cannot be repeated here as I was slowest in responding, wanting to put my camera away out of any possibility of potential danger or water damage first, before anything else, naturally enough. A full-sized, summer dressed, friendly Goddess leaning over him with all the abundant charms of Isis incarnate, helping to pull him to safety he did see and appreciate however, judging by his eye movements and general disposition. Acute observation, after-all, is one of my many talents. Who knew saving mortals together could be such fun. 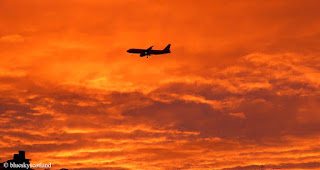 Evening walks also bring a chance of catching great sunsets so here's a few recent ones we have enjoyed. 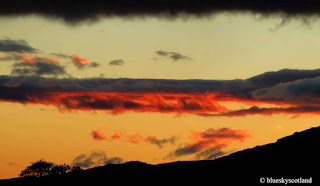 'The Road'.    A potential new walk in Heaven for Ra and Isis. 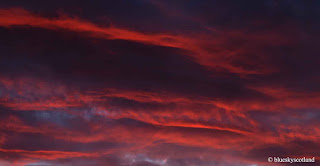 Yet another West Coast Sunset. 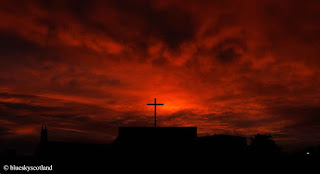 I remember being taken to view the Erskine Bridge as it was being built. Love your sunset pics, especially the one with the plane. The weather has been truly amazing.

Hi Anabel,
Funnily enough I have no memory of the Erskine Bridge, Erskine itself, The Esso Hotel or the large factory complex being constructed as during the 1970s I was elsewhere. I only got to know the place from the 1990s on-wards. I did go under the old Clyde Tunnel though several times before it closed and walked under the present one shortly after it opened. Also remember a tunnel visit off Argyle Street with large pipes in it and the old dock warehouses along the Broomielaw where the buses originally dropped us off for the city. A very different Glasgow then, busy and soot black buildings everywhere, with several bank to bank ferries still running and millions of noisy starlings roosting above the shopping streets at night..

Never knew the Erskine Bridge was that high - doesn't seem so when you drive over it - I've never walked over it - not sure where I'd leave my car to do so really...

Love the plane in the sunset and the cross (what cross is it?)

I always notice those damselflies (well, the male ones) as, no matter how small they are, I just see the flash of bright blue. I think I spot things on colour and movement rather than anything else. Oh, and shape if it's snakes...

Hi Carol, Yes,
it has to be that high with the occasional tanker, Oil rig platform and cruise ship passing under it. You come off the A82 on the left immediately after the Erskine Bridge slipway with next ramp signed Old Kilpatrick and the car park is right beside the bowling green and train station. Bridge is ten minutes walk from there or you can walk up to the Kilpatrick summits on good paths. It's a local church cross.