Adventure Is Where You Find It. A Local Ski Day. 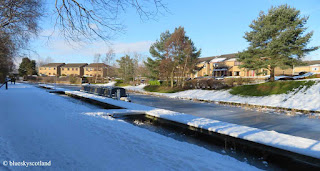 A day of snowfall at low levels, during what has been so far, a very mild winter, was not to be overlooked so I immediately got out the cross country skis  and set off for a local glide and slide around the area. The Forth and Clyde Canal at Anniesland here, above. By using this normally green but now white corridor snaking through the north west corner of the city you can link up several parks/ green spaces/ quiet minor roads to make a satisfying walk or cross country ski route. 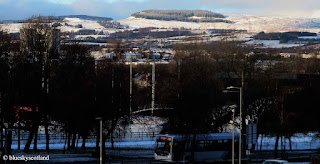 I did not know how long the snow would last but assumed it would melt quickly so I wanted to take advantage of it as it freed up a large chunk of land normally out of bounds to the general public. Kilpatrick Hills here seen from Lincoln Avenue in Knightswood.

The land in question being Knightswood Golf Course, normally busy with golfers and bouncing golf balls but under snow transformed into a new chunk of empty ground to go exploring in. And unlike the higher hills no uneven ground, boulders, holes, or tussocks to trip over or slow you down. Glasgow, and Edinburgh, sits at the same latitude as the frozen Hudson Bay in Canada, the lower wooded parts of Alaska, and is further north than both Moscow and Lake Baikal in Russia. Granted, they have a much colder climate than we have with the slender island of the UK warmed in winter by the Gulf Stream/ North Atlantic Drift and no part of it far from the influence of the sea. An amazing fact nevertheless that many people don't even think about in familiar old Britain with its usually temperate climate so better hope that wonderful Gulf Stream stays stable.  Dog walker on golf course here, above. 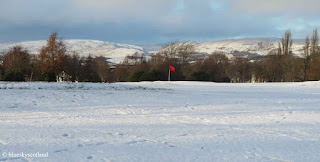 Only when the wind brings weather from the Arctic North or from the East, across Siberia, do we get bitter spells of weather and this winter, so far, it has arrived from the South bringing much warmer air with it. 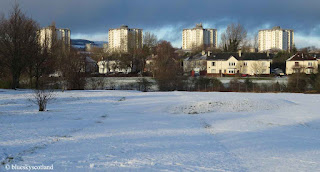 I just enjoyed taking advantage of a brief cold spell, sliding over smooth flat ground normally out of bounds the rest of the year. 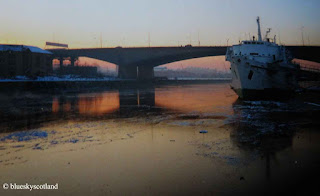 Of course when we do get air from these places the temperature can drop alarmingly and I remember taking these photos when the River Clyde froze solid after several weeks of sub zero temperatures when it got down to minus 10 in Glasgow for over a week, and dropped to minus 20 in the Scottish Highlands. The Tuxedo Princess here, a floating car ferry turned into a nightclub, which dates this photo to the late 1980s as it was normally berthed in Newcastle before that, and returned back there, still used as a floating nightclub, popular with celebrities, until the early 2000s  Originally built in Dumbarton for ferry crossings from Stranraer in Scotland to Northern Ireland. 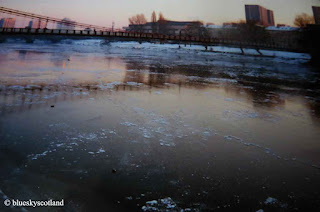 When I took these in the late 1980s  the River Clyde was solid right down to the Renfrew Ferry... in those days a much larger, heavier craft than the current one used this crossing so was able to act as an icebreaker in the river, carving an open corridor through the ice, bank to bank, with everything downstream cracking open as a result freeing the rest of the river which only had chunks of ice floating in it, moving gently downstream and aided in part by tidal salt water flowing up to remain unfrozen below that point. A memorable sight. A harsh winter for wildlife though. 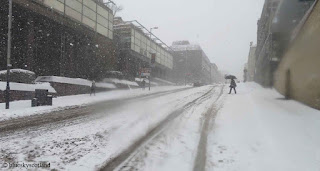 On another occasion, March 2018, ( the infamous 'Beast from the East') we had a large dump of snow, even at low levels, like here, within the heart of  Glasgow City Centre bringing normally busy streets to a standstill and causing public transport to grind to a halt, albeit briefly. 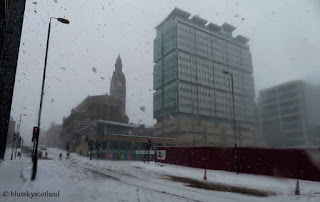 I took advantage of that time as well, catching a morning bus into the city centre, having a walk around then getting one of the last buses back out again  to my house on the outskirts before the snow got too deep for them to operate in. 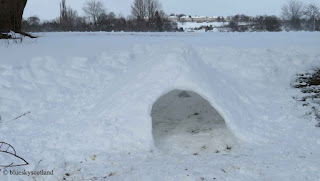 In the city parks it was even deeper, allowing locals to build snow tunnels and igloos in six foot deep snow drifts. 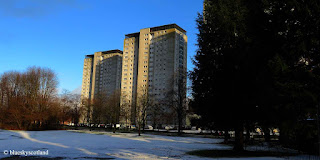 This present fall was just enough to have fun with and in the city of one hundred hills... and many urban mountain ranges... ie the  various hi rise flat clusters...I had no need to fly away to Alaska, Canada, or Siberia to enjoy myself. I was already there...in my imagination.... for a few hours at least. 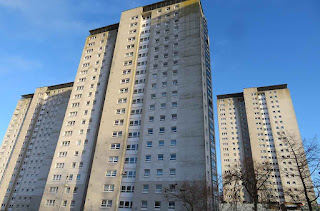 There's something very inspiring about any tall structure standing in the landscape... be it jungle pyramid, lofty mountain range, huge trees... or in this case... skyscrapers. Always awe inspiring... 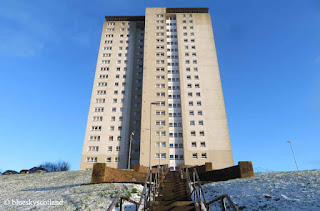 ...and ascetically pleasing. This is a modern temple and these are the  stairs leading up to it. Hard to reach on old fashioned cross country skis though. 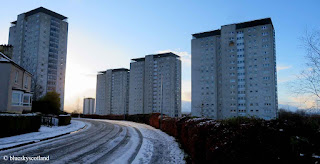 Once up there however it was flat again and any minor roads held enough snow to glide along happily. (or shuffle and slide in my case)

From this higher location good views opened up over the district of Knightswood and the Kilpatrick Hills beyond.

Drumchapel tenements and the snowy hills behind...

Who needs to escape elsewhere when you have all this? Loganair plane landing at Glasgow airport with its distinctive tartan tail fin. 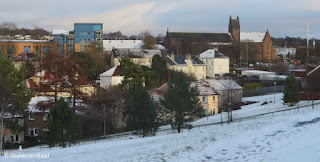 By using this golf course (or the adjacent Wee Park running along beside the Garscadden Burn nearby if golf course is out of bounds again)...Knightswood Park, Trinley Brae, and the canal tow path, all fit together... and a good walk or ski under snow can be worked out of a few hours duration. Within an urban area yet mostly undertaken through green sections of pleasant land. Knightswood Cross and twin churches here, above, from another green hillside section. 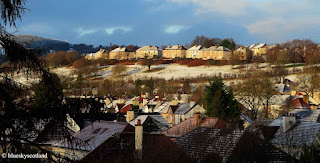 Looking across at Trinley Brae and High Knightswood... where I was heading next. 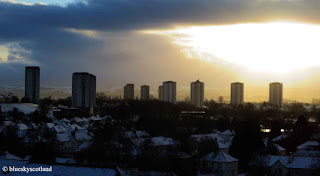 The view from Trinley Brae towards Scotstoun and the hidden River Clyde... 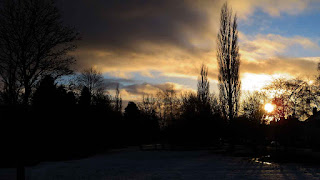 'Carpe Diem'    as they say in Rome. The next day it melted and we are back to milder conditions.

I like snow, however, only briefly - i.e looking out of the window first thing in the morning and enjoying its pristine coating coveering the countryside. However, after a brisk walk through it, that is enough for me and then I want it gone. Luckily no snow here, chilly air but lots of blue skies and sunshine.

I love a bit of snow myself but did ye no feel silly skiing around the suburbs of Glasgae? I wouldn't dare! (not that I could stay upright on 2 planks anyway).

There used to be a berthed ocean liner on the beach on the way into Wales which was a nightclub. I used to pass it on the train into Wales. It's been shut since about the 80s now though I think.

Same here Rosemary.
I like a day or a weekend in the snow but having it linger around for weeks at low levels is not for me. I watch Ice Lake Rebels and Alaska: The Last Frontier where they have months of lying snow on the ground and frozen lakes and I'm glad I don't live further north than Glasgow, which is bad enough. Joni Mitchell has a great early 1960s song called 'Urge for Going' about the onset of winters in Canada and wishing she could escape them- and she did!

No, I did not Carol. Mainly because there was hardly anybody around to see me. Something I've noticed before outdoors is that if you pick your location wisely you meet far fewer people in cities and in the urban Central Belt than up the Munros or places like Tyndrum, Glencoe or Skye, year round. Alex and I witnessed over a hundred folk during a 'wilderness' weekend in Knoydart several years ago and the bar (the most remote hotel in the UK mainland)was packed every night with food gourmets. Reminded me of Ashton Lane or upmarket Chelsea with a similar clientele. They would definitely have laughed at my efforts and outdated equipment.

Or the Lakes - you meet multitudes on the hills here!

No idea why gourmets were in the Knoydart Pub - both Richard and I were deeply unimpressed with the food! They didn't cater for my vegetarianism at all - one night they gave me pasta with a can of veg thrown on the top! Even I can do that myself! Unfortunately we were in a B&B so couldn't self-cater...

Don't blame Joni Mitchell for the song and the later escape - I'd have tried my damndest to do the same if I lived there or anywhere so cold!

Can’t remember what I did that snowy day - stayed indoors I think! Walked along that section of canal today and we noticed there were no boats moored any more.

It's more of a fresh seafood platter affair Carol being on the coast. As it was a long extended spell of sunny dry weather it was full every night with folk off yachts and more of a hedge fund manager type of vibe and conversation than we were used to in Highland haunts. Having said that nearly all the popular Highland places have gone upmarket since we visited the west coast and far north regularly years ago. Even now we are more of a tent and bothy, free accommodation, pie and beans, steak pie and chips for a fiver type guys normally.

Hi Anabel,
Winter so far has not been too bad and only two and a half months to Spring. Yippee!

You must have had some funny looks skiing through a city. I once skied up from the town car park in Kington, near where I live and the locals were bemused as I skinned up the pavements. I even had a pretty decent few turns in soft powder down a long driveway to a country house.

Not many folk around to watch me Andy, being the outskirts of suburbia, just a few dog walkers in the distance. I do remember, many years ago, hiring cross country gear in the City Centre then skiing through Kelvingrove Park until we arrived in a well known Partick pub, skiing right up to the door. There was about six inches of snow on the pavements that time but the punters inside were still very impressed by our stylish arrival.