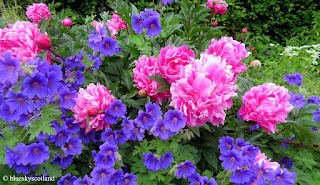 There are certain times of year in the UK you do not want to miss. One is spring... and another is early summer. I've always known this but sometimes, when other things or events get in the way, you can forget it's coming around. This fact was brought home to me recently when I went to a place I go to all year round, week in, week out, so I take it for granted.... but on this occasion it was looking very lush and exotic.... yet it's not normally an exotic place.  That's when I knew nature in the UK was at its very best for colourful blooms, trees in full leaf, and dense vegetation. The Scottish urban jungle was at its peak... and I was missing it!   It was the time to be outdoors. 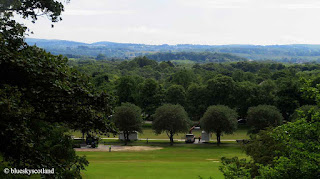 So a grand walk was called for. Bellahouston Park, seen here, is one of my favourites for the extensive views over Pollok, once a grand and very extensive estate stretching to the far horizon in this photo. The last few years though parts of this park have resembled a building site with various pipes and drainage going in to stop flooding. (I have to admit I liked the giant pond sized puddles every winter as it was great for reflection photography.) They have been digging up the pavements here as well for more pipework/ fibre cable laying so I was hoping it was back to normal now. As you can see here and in the photo below it was not. 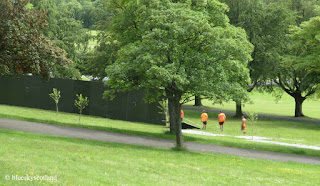 They have almost finished the drainage work but a large fence was being erected in the flat southern section of the park and when I asked what was going on I was informed it was a ticketed pop concert scheduled for mid June featuring the latest trendy singers ...( but no- one I'd heard of or wished to see.) 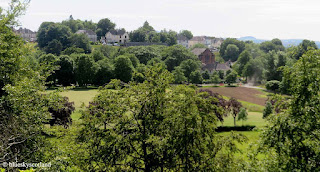 Another disturbance in the park.

This didn't bother me though as there was plenty of the park left which was undisturbed so I made my way to the top of the hill for the views. Clyde College and Leverdale Tower in this one.

From long acquaintance with this area I'd say that this south western quarter of Glasgow is easily the greenest and most tree filled part of the city and you can see that here in these photos. 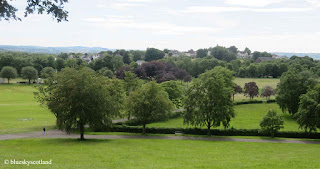 Something I've long thought of as 'The Beautiful South' even before a well known UK band claimed that title. 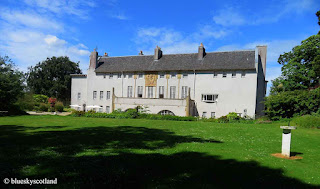 House for an Art Lover in Bellahouston Park. So far this was all very familiar to me so I deliberately picked a different route to visit places on foot I have not been in for a few years or in some cases several decades. 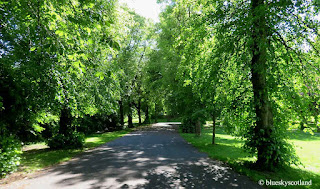 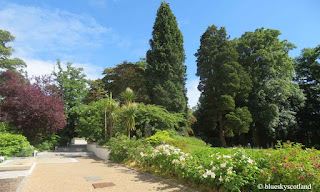 I left Bellahouston Park by its back entrance onto Dumbreck Road and found myself in 'Wonderland'  or in the real world Pollokshields. The only time I've been bored on city walks is when I've travelled through a flat landscape, consisting of lower middle class districts with pleasant but fairly identical housing stock. Mainly because nothing happens there. The walks I do enjoy however seem to be at the top and bottom end of the scale... either grand mansions or wild council estates... as they are much more interesting to travel through. 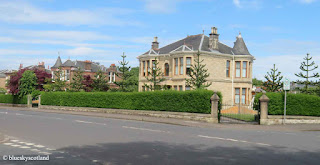 Pollokshields has grand mansions and wide elegant streets and from a very early age I've always loved wandering through places like this. Much more to see... lovely well kept gardens... and on a sunny summer's day it could almost be a fantasy land. I've got no envy or inclination to live here being perfectly happy and content with bothy life and what I've got at present but I just like the feeling of wandering through such a beautiful area with interesting architecture as all the buildings here are individual and different. 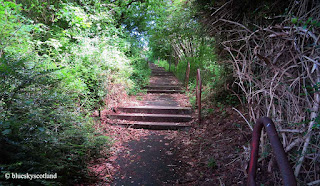 So through the rabbit hole I went... from one life into another. Like Alice I used to come here as a child to visit my cousins and it was always a special occasion... and a privilege to be here. A feeling that's never left me. 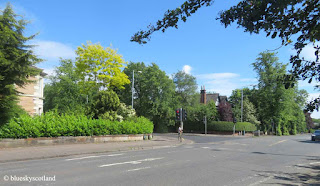 For one thing it has wide boulevards and an exquisite range of trees, even on the main busy traffic corridors.. and in the sleepy back streets it has such an air of timeless antiquity you can easily imagine horses and carriages pulling up outside a grand abode in 1910 with a pair of well trained dalmatians padding along in the rear. And maybe a butler or a footman coming out to greet the inhabitants of the coach. In short a place to dream. 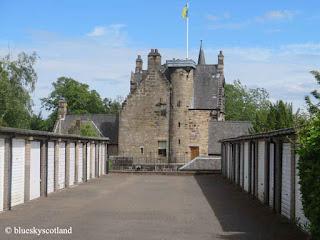 With a couple of magic castles thrown in for good measure. This one is Haggs Castle, a late 1500s tower house that was once the home of the powerful Maxwell family who owned most of the surrounding lands for miles in every direction, then it was nabbed for war use, then a Museum of Childhood, and now it's a private residence once again. 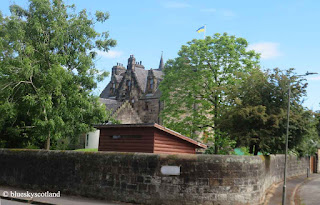 A different view. We used to walk past this building on the way as an extra visual treat. Castles of any description always have a major influence on young imaginations. Even the word 'castle' conjures up images of past times seen in numerous films like 'The Long Ships', 'The Vikings' 'Taras Bulbas' and 'Ivanhoe'... all 1950s -1960s classics frequently screened on TV back then and even now... featuring castles. 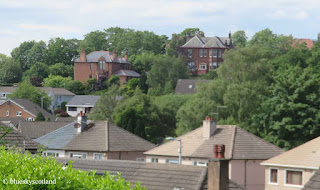 Another highlight for me is that grand mansion lands often occupy the best hilly ground within any city and offer excellent views ( well, you would, wouldn't you) so it is a joy to walk through these areas.

And I do like a nice hill top view over the city. A view looking towards Cathkin Braes here. 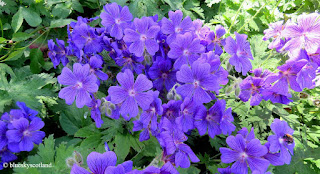 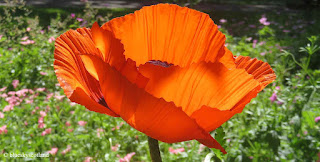 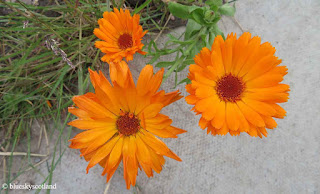 The beauty of June in the UK... 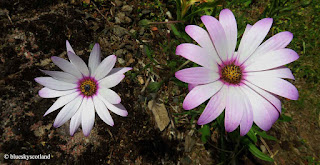 ...and the perfection of flowers. 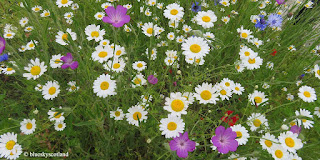 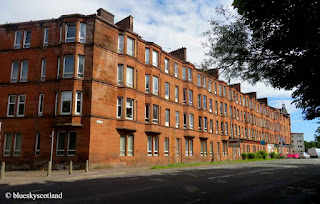 I certainly remember this row of tenements on Haggs Road as this was where my mum and me used to get off the bus to walk to my cousins. The Old Swan Inn was the pub at the far end corner of this row for many decades previously but now I discovered it has had a makeover. 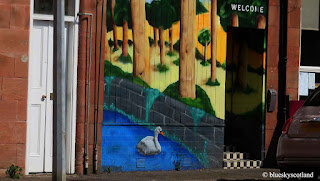 Swan mural beside the pub. 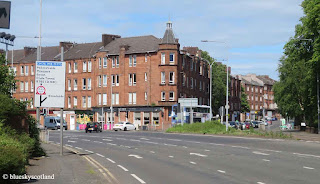 A very familiar view from my past. The road up to Shawlands on the right was where we went shopping, trips to the cinema, had my first driving lessons, hair cuts, discovered nightclubs and pubs, etc...and at half the price and half the distance into the city centre a popular alternative weekend destination for the first 27 years of my life. This stylish gastro pub is now called Eala Bhan which means The White Swan in Gaelic from a famous poem so it's went upmarket but still retained its heritage, hence the mural. And that concludes the first part of the walk.... In part two serendipity makes an appearance, grabs me by the goolies, and takes me to a very different location... and a sight I did not expect to see.

Pollokshields looks really nice - were your cousins rich? did they live there?

I'm a bit fed up with nature just now - I had to trim my garden hedges where all my myriad sparrows live and now I have well over 100 insect bites all over me. I literally can't concentrate or sleep for itching all over - nasty!

Hi Carol,
'Rich' is a flexible comparative term. They owned their own detached house in the 1960s while we were council tenants in a tenement but their house was on one of the ordinary less upmarket streets while still being within a good area... so to one of the grand mansion lot they were 'the commoners' but to us they were 'aspirational' and 'well off' while still being down to earth and not 'stuck up' in any way.
Although admittedly annoying at this time of year we're very lucky in this country to have no dangerous animals or insects.... and we have an almost perfect climate.. not too hot, not too cold, little in the way of destructive weather events.

well I'm certainly in danger from my constant scratching and my almost total lack of sleep!

Cold shower or bath for 15 mins cools the skin. Doesn't have to be freezing just cold enough to chill things down. I used to get that every summer after Highland Hill-walking. Ticks,clegs, midge etc... Was not so bad on Munros but on the pathless lesser hills everything had a go at you. Man up and stop being a wuss...:o)

Everywhere I go around here they are digging up the roads or pavements - it is driving everyone mad. I suppose that the whole country is playing catchup due to the long lockdown, but I wonder where all of the money keeps coming from to pay for it all. Lots of interesting colour in your June photos - my husband is way up beyond you in Aberdeen and will be there for another two weeks - my poor arms are weary from watering the garden.

I think some of it might be for City Fibre Rosemary as they have been all round Glasgow the past couple of years in nearly every street digging up the pavements and leaflet ads for fast broadband
coming through the letterbox afterwards.
I had that a couple of summers ago during lockdown. Planted loads of seedlings for an elderly neighbour in her garden so she would have plenty of flowers to look at then had a month long heatwave so I had to fill up buckets and 2 litre bottles from my own house to water them every evening to keep them all alive. Hard to get a decent garden hose these days that will stay fixed on my particular shape of taps without leaking or coming loose under pressure.

I've been trying to freeze myself - I've been sleeping with no covers or clothes and have been absolutely freezing but if one body part touches another, they both start itching. I can't sleep on my back in a star shape but that's the only way I can stop itching!

Looking beautiful! We were at the revamped Burrell last weekend and Pollok Park was looking good.

Hi Anabel,
Yes, I was in it that same day. That was my return walk in the evening. Still daylight at 10:30pm this week. Had Pollok Park almost to myself.