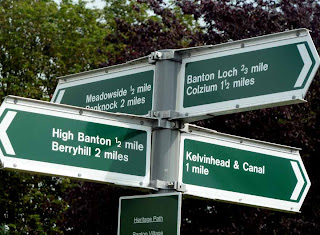 When I go a walk ,As most people probably know by now,I,m  just looking for a  variety of habitats and surroundings.I no longer feel that need to throw my poor floppy body up the highest  mountains every time if its just a solo walk,mainly because that same poor body will suffer in the process and I can have as much fun lower down.(Mind you I still like reading about other people suffering pain ,thirst and starvation on the mountains as long as its not me.Oh Yes ,Even today as the wind from the remains of Hurricane Katia rocks the house I think of brave folk on holiday struggling up the hills in the rain enjoying the 80 miles an hour winds...  take a long sip of fizzy orange and munch another cream scone. Happy days!) I was actually suffering high myself last Sunday on a Corbett but as Alex usually posts these I,ll wait  for now.If I had to pick my perfect solo day however it would be one with contrasting scenery,good weather conditions,loads of interesting nature and hopefully a new area to explore.
If I had to pick my best  buy in an OS map It would be the one of Glasgow.Forty  tattered years later I,m still finding new areas to explore on it.
I actually discovered the pleasant little village of Banton  for the first time on a cycle ride last year but it was just in passing.I did notice this rights of way sign however.When I got back to the house I had a  close study of the map as if seeing its potential with new eyes and promised myself a future visit on foot..One of the benefits of all the new signage around these days is walks that before were the preserve of locals only are now more obvious to everyone else. 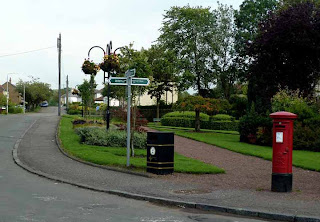 Banton is a lovely wee place.It still has an old mill building  in use as a modern base for two companies.In the old days according to another handy sign it was a weaving mill and the Girls from Kilsyth used to Walk the Lade trail to Banton to get to work.Most of the men in the area then worked down the nearby pits.
I parked at Colzium House as its good parking in this Estate and as their local park its a great asset to the surrounding Community.Hopefully that will continue into the future as new housing nibbles its edges and cut backs everywhere means less money available for upkeep and maintainance of parks and gardens.It looks splendid just now though. 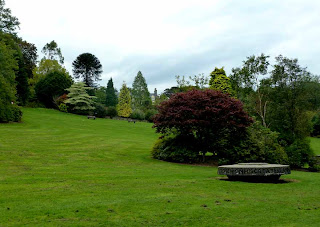 The round monument commemorates a victory for the royalists under the command of James Graham, 1st Marquess of Montrose who defeated a larger army of Covenanters in the vicinity of Banton Loch.Old relics and objects from that time are still being found occasionally in the fields around the loch.It can get boggy in the marshlands near here but this is something else again!!!  When digging the nearby Forth and Clyde Canal an unlucky trooper was found trapped and preserved in  a bog from that time still astride his horse.What a sticky end.What a Bog!  http://en.wikipedia.org/wiki/Battle_of_Kilsyth
A good trail leads from the park along the south shore of the loch then into Banton itself.Dragon flies and damsel flies danced around reedy margins and it still felt like summer though it had been a chilly morning.This little snail is enjoying the sun while it can. 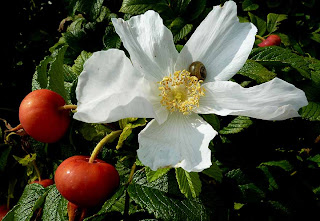 I kept going and was soon climbing up to high Banton then through two green gates just before the entrance to Glenhead farm which took me into the open fields and onto the Kilsyth Hills.This was new territory for me.An obvious track on the map leads to Berryhill farm via the ruins of Drumnessie.It was a pleasant walk ,warm with good views over towards Cumbernauld and the upland plains Alex and I were cycling on a few weeks ago. 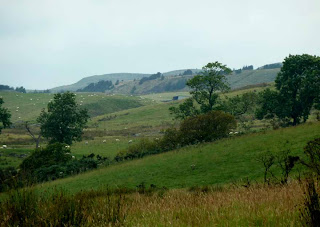 Smashing scenery and just below the clouds enveloping the higher mountain ranges around in the distance. 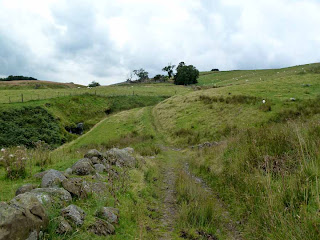 Apart from cattle and sheep roaming around its a fine lonely walk with an open feel about it.The route brings you out high on the Tak ma Doon road from Kilsyth to Carron Bridge,a favourite for keen bikers as its a killer of a climb when peddling.
Luckily I was descending so it was fairly painless.There was a local woman riding her horse beside the golf course and I couldn't resist a photo as it summed up what a smashing wild area this is.I was hoping she would break into a full blown gallop but she just managed a trot.Shame.Horses galloping against a dramatic landscape is always high on my photographic tick list. 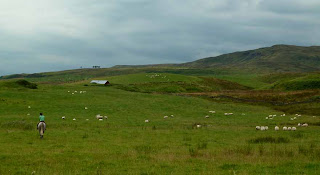 Did manage another long held photo tick though.I,ve lost count of the number of insect photos I,ve taken where the background is not right ,the subject flies off ,or its out of focus.I don,t have the patience or willingness to set it up under controlled conditions to get that perfect shot as  I like the spontaneity of the moment as it happens rather than the technical aspects involved.If I get it fair enough if not ..there,s always a next time. 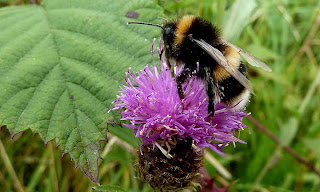 Quite pleased with this though as bumble bees never stay still for me when the camera has to be right in their face to get a decent shot.
Ended the walk with a stroll round the fabulous walled Garden at Colzium estate.For its size (its tiny) it has to be the best use of planting and paths I,ve seen in a walled enclosure of this type in Scotland. 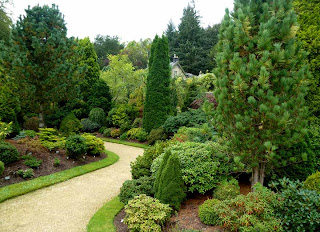 One thing I did notice on the way back from this area was a place outside the estate.Inside the estate  there was this good example of a stream system in full summer bloom. 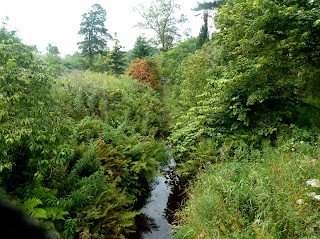 A natural enough scene with a good habitat for wildlife.
then again  there  is this..... 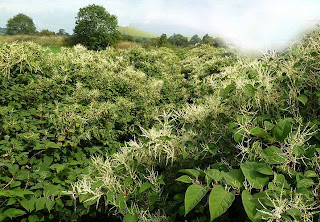 Although it looks beautiful in flower and was first introduced as a garden plant for that reason Japanese knot weed was soon seen to be an extremely aggressive plant outside of its native homeland where it has naturally evolved insects and predator controls  to keep it in check.Left unattended anywhere  here it can grow through roads ,concrete,cover vast areas quickly and spreads even faster if you cut bits off it or dig it up and throw it away.The last ten years I,ve noticed every river system in Scotland become a breeding ground for another beautiful but invasive plant... Himalayan or Indian Balsam.This seems to have started out in Kew gardens in Victorian times then escaped into the wild.Its taken a long time to arrive up here but every summer it blocks out more and more of the variety of riverside plants til it becomes the only species left.In winter, when it dies down ,you get a bare riverbank which is then open to erosion.A lot of people  don't recognise them near their house til its too late.There have  been extreme cases of Knotweed even coming up through floorboards.
If you want to know what real life triffids look like...... here they be. 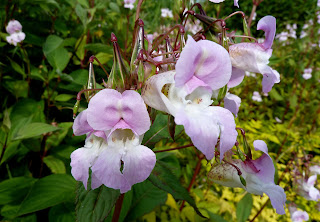 I take Ben for a walk in Colzium estate most weeks. I am always amazed how few people seem to visit; such a contrast to Mugdock. The loop path round the waterfalls is Ben's favourite area, and the uphill bits keep my leg muscles in trim!

That battle of Kilsyth must have been a defining moment in history.Imagine a mounted trooper!
Got me reading about the Dullatur Bog and the building of the canal.I found this passage.

"While work progressed, the bodies of men and horses that had fled from the Battle of Kilsyth and perished in the bog were uncovered; and if that wasn't enough to deal with, the work disturbed millions of frogs who spread like a Biblical plague over the countryside in search of a new home".

Hi Neil.
Seem to remember an interesting pet graveyard at the start of that gorge walk.Not sure if its still there as I know they stopped folk
using it for burials.Its a shame about the hole in the tower of the old clock theatre.Hope it gets fixed soon.
bob.

Hi Jim.
Yes,we think we know of boggy places today but obviously they are nothing like the natural swamps and marshlands of a few hundred years ago all over Scotland.The Forth and Clyde Canal must act as an extra drain for that whole area now yet its still pretty waterlogged in places even today.
bob.

It was 30 years ago, but I remember camping in Loch Lomond like it was yesterday.

Its a great Place Loch Lomond.Nowhere else like it in Scotland.
bob.

The pet (though it was originally just for dogs) graveyard is still there. The local council have stipulated no more burials but it doesn't stop us locals (in recent years I've buried a cat and a hamster)! From young child to now (I'm 34!), I've always loved looking around the graves. It's amazing to see some of them with headstones dating back 100 years.

I am a Banton girl born and bred, but have lived in Kilsyth for many years now (the pub in Banton still being my local and my children both attending Banton Primary as opposed to a Kilsyth school). There's very rarely a day passes that I don't visit the Colzium, usually to walk my daft as a brush dog. The camera is always by my side too - as much as I'm not keen on Kilsyth as a town, you can't argue that the Colzium is just simply stunning in so many different ways!

Hi Anon.
Yeah its a lovely area with fine walks.I took photos years ago in the pets cemetery of some of the older graves but never posted them as its folks private memories of their pets.
There,s one in the middle of Fife as well in a wood and one down in Portmerion in Wales.