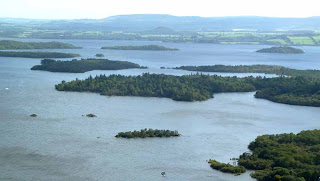 I am lucky enough to know a family who own a boat.Occasionally,if there is space,they are kind enough to invite me to tag along.One such trip happened this spring when we went on an overnight camping trip to Loch Lomond.
The family consisted of Gail, John,their  teenage daughter Morven and her same age friend Jennifer.
It was a  family geocaching trip so it was a magical mystery tour as to where we would go or where we ended  up.
At 23 miles long and just under 5 miles wide at the southern end Loch Lomond has plenty of space to get lost in.It also contains a stunning archipelago of  23 named islands,some big some tiny but all  different and unique.A few are flat with wide sandy beaches,others are high and rugged,covered in thick mixed woodland of Caledonian Pine and deciduous trees,mainly oak,alder and silver birch.A couple of the islands have working farms with fields, meadows and cattle.There is even a seasonal pub on Inchmurrin the largest Island with a notice that says...."no wet suits at the bar". 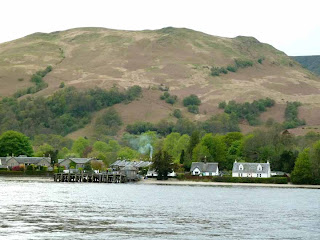 This is the village of Luss seen from the loch.It used to be famous for the  highland  TV soap"Take The High Road" but even though that's long finished its still a popular and pretty village that pulls in the tourists in huge numbers.
We parked at Balloch and set off from there as thats where the  main slipway is.All motor craft have to be registered and given a number before they can sail on the Loch.I think kayaks and canoes are ok though as I never had any bother when I used to explore here but that was before it became a National Park.
The geocaching went well and we found a couple of  little boxes hidden over the length of the loch and on islands.As far as I understand the rules you find  little waterproof boxes filled with either trinkets,toys coins,notes etc.If you take any away to keep you have to leave one behind of your own with stuff of a greater or equal value.Its like a treasure hunt  with different levels of difficulty of hiding places depending on  personal ability as caches can be placed halfway up a mountain, on a rock climb,in woods,swamps and even underwater.In the USA a few people have even disappeared permanently, lost out in the wilderness still looking for boxes.Its very popular worldwide and can be quite addictive ...or so I`m told. In a lot of national parks they are not allowed. 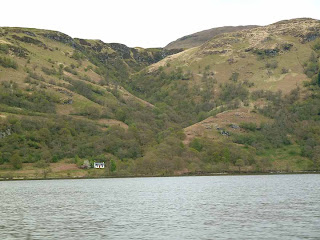 From my point of view it worked out well as we set up  the campsite in the middle group of  larger islands  seen in the first photo then headed off towards the northern end of the loch.This is narrower than the south end and is much deeper going down to over 600 feet in places.It only has a few small islands dotted around but as we had to search the mainland banks for hidden items we thought we might as well  pay them a visit too.This was an  unexpected bonus for me as I managed to then bag the last remaining islands not reached by kayak  from years ago.Felt good to collect the  full set at long last. 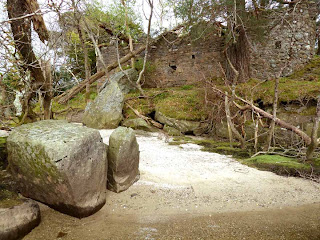 Inveruglas Isle has the remains of MacFarlanes Castle on it, reputedly destroyed by Cromwells troops in the 17th century.The same unfortunate clan also had a castle on nearby Eilean I Vow but its the same story there...only a  sunken dungeon remains which you walk down steps to enter.Its a lonely little place remembering past glories buried deep in its stones. 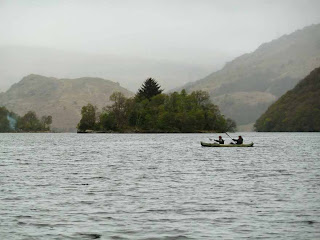 Being spring loads of Canada geese had nests on both these islands so we didn`t want to disturb them,just a quick in and out to touch the beach in the case of Inveruglas.These birds are not slow to let you know they are upset though.You can tell this one is a bit peeved. 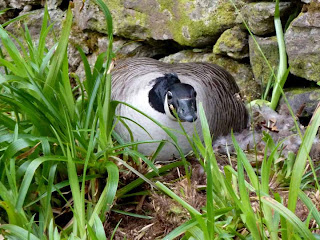 Next up was Eilean I Vow which sits at a narrow part of the Loch.Its almost a perfect circle,covered in dark yew trees,juniper and ivy.Very green and it has a slightly creepy feel at night.I`ve slept in the dungeon  once years ago during my kayak years. 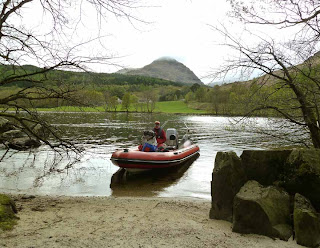 This is the boat with John the sometime skipper (driving is a family enterprise with everybody taking a shot at the helm) It was actually a great time to be on the loch.Being spring It was fairly quiet boat wise as it was overcast most of the weekend but didn`t rain.On a lovely sunny day during peak season it can get too busy at times,boats jet skiers  fishermen and campers all trying to find a peaceful bay to call thier own.
We bagged a third island,Wallace Isle then headed back via Rob Roys Prison on the West Highland Way,a well hidden cave only found because it has CAVE in large letters above it.If it didn`t you would never find it which was rather the point when Rob Roy  used it. 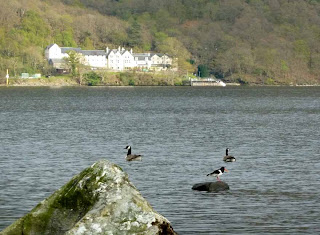 This is the popular Inversnaid Hotel,reached by a narrow twisting road which the tourist coach drivers must love.
It was a great evening. Not too cold for sitting out by the tents, clear with only a few midges soon removed by a small  fire as loads of drift wood lay around on the sands nearby.The family had a good BBQ dinner prepared by Gail which looked lovely and I as usual  had my favourite standout of  smoked beechwood sausages,pineapple chunks,tomatoes and  onions  grilled over the coals on sticks.Perfection. 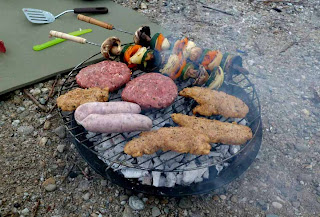 This is some of the family meal prepared by Gail and the girls.Yum Yum.Its making me hungry even now!!
After a pleasant evening of watching boats drift by,stars come out and  then a hanging lantern and candle show set up by the girls we adults broke out the wine, cheese,nuts,crisps and beer.A couple of  hours or so later it got too chilly for the girls so they went  off to bed .John I stayed up  talking by the fire,had another couple of cheeky beers, munched crisps and then a plate of  burnt leftovers found nearby (as good as a kebab) and generally had a mellow time.For me it was a nice feeling  just being part of an extended family group for a short period,a  rare novelty as all my close relatives stay  over in Australia.Most of the time I`m happy on my own but its nice to compare the difference occasionally. 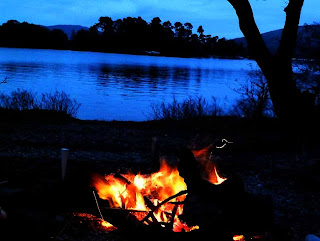 There`s always something really special about camping on an island and it felt a lot further and more remote than 20 miles from Glasgow with a surrounding population of two and a half million souls.Its best explored in spring and autumn though when its empty and wild like this.A great trip. 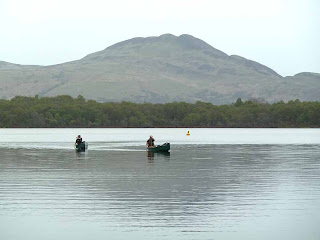 As Tom Weir used to say."You only know Loch Lomond properly if you visit its islands".
Inchmurrin and Inchcailloch can be reached by small  ferry boat or hired rowboat.(take plenty of rowers,its harder than you think) I believe there is still a post boat service operating some days from Balmaha and several " tour the  central  island trips" run  in summer from Luss for those interested. £9.50 a head plus concessions for OAPs and children.http://www.incallander.co.uk/bustimes.htm My choice would be the Luss tour round the central islands (not landing but scenic or MacFarlanes boatyard which has a choice of options available.The larger tour boats tend to be £££.
Wildlife you might see if you are lucky include ducks ,geese ,ospreys,buzzards,capercallie (five left on Inch......? I think),fallow and red deer and wallabies.
Yeah....some still survive for now.Support your local  jumping pouch puppies.Furry  introduced children of the 60`s.The capercallie can bugger off to some of the other islands.Keep the trapped tail bouncers.They don`t need any money spent to save them they do fine by themselves and are much loved by many people.Furry love beats feathers any day :o)
http://www.lochlomond-trossachs.org/looking-after/help-save-the-capercaillie/menu-id-650.html 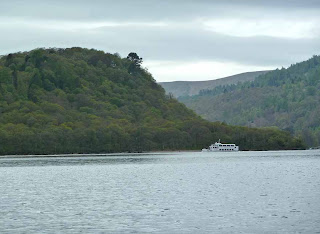 Off  now for some well deseved home made pizza.Over and out.
Posted by blueskyscotland at 20:05

Anyone wondering what has happened to the way the blog photos are poping up as a slide show...Its google,s new concept for blogs! I have one word....Crap!
Dont click on the photos and its OK.
Anyone else got the same problem?
bob.

I like the new slide show Bob.Sorry !
There is a way though to still view individual pictures and that's by right clicking and taking the 'Open in new tab' option.

Thank you Jim.You are right. That method is Ok.I always knew you were a clever guy! I was going to stop posting altogether as I still enjoy going out but the thought of
4 hours out of an evening(when I could be watching endless repeats of top gear :) every Monday night sticking something up only a few dozen people will ever read....well it gets to you after a while.I,m sure most bloggers must feel the same now and again.
Although I,m still going out with Alex most weekends that,s why he,s got his new blog which is only for hills.
I prefer doing a mixture of stuff but he,s aware if he wants to complete his lists he,s got to stay driven and work to his own tick list if he wants to finish before his feet fall off :)
I,m a bad influence on him!
bob.

I know the feeling well Bob,the thing is if you want lots of followers you have to follow lots of blogs and that's not for me.The way I see it is that I've got an online record of my favourite days,and as it stands at the moment no blog no matter how long it's been dormant has ever been deleted,it's forever.Of course viewing and templates change,but the gist of the post will stay.I'm happy with that.
It doesn't work for everyone of course,here's an example

Good advice Jim.I suppose I was just fed up as I had a backlog of over a thousand photos to sort out and resize and for once was not looking foreward to it as a pleasure. My Usual end of summer gloom no doubt.The onset of Winter and nature,s annual abandonment is not my favourite time of year. However it is good for photography.Dont think I,d fancy living in a country further north than Scotland though.
Have now knuckled down and done 800or so.I,ll need to learn to take less photos when I,m outside.Only problem with a digital.
Sunny side up again.
bob.

It's a strange thing blogging, I enjoy reading your posts though :)

How to go about increasing exposure is something I've pondered recently too, no answers yet though.

Regarding Roberts last comment there are ways to increase exposure.

One way is to register and put your blog on a blog list such as (theqqqe.blogspot.com)or (topbloglists.com)

Don't know if I fancy doing that though.