Day two at the hut in the Cairngorms dawned similar to day one.Strong cold wind,risk of snow,severe wind chill on the heights around minus -15 to -20 at a guess.The previous night a few of us had thrown down the gantlet to some of the younger members.In our Munro bagging days we ( John, Alex and  myself ) had climbed Carn A Mhaim, Ben Macdui and Derry Cairngorm in a days walk in  full winter conditions from here then the next  day we,d bagged Beinn A Chaorainn and Beinn Bhreac before driving back to Glasgow.A good weekend.
"Of course every generation is weaker than the last." It was declared to the room.
When sitting in a corner,poked with a stick or thumped with a cushion to see if we are still alive or how much dust comes off us...well ,sometimes we are forced to bring out the big guns....and rely on past glories.
This challenge was taken up by Graham, Gordon and Phil who set the alarm accordingly for a  predawn start in the dark.They had still to do this latter pair of Munro,s with a bog like high plateau  of tussocks between them. Hard going in deep snow. 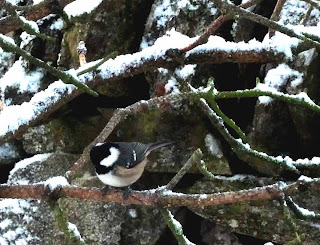 I was up early as well.One of the duties of the hut is to feed the wildlife refilling the empty feeders  hanging outside with nuts.Even before I,d filled them there were 20 hungry coal tits waiting nearby.A bird of the pine forests.Poor little buggers.
Alex had in mind another Corbett,Morven,near Milton of Whitehouse, but when we got there in the car it didn,t  inspire me as much as the scenic country we,d just passed through.I have to say this hill looked as interesting as the Corbett the day before.Identical Twins in fact.On a calm day I,d be tempted for the views but If anything the wind was even worse today. I would have felt obliged to go up this time with him  though but luckily he had company in the shape of John and Julian.Two equally committed Corbett catchers.
Off they went up the hill and I happily retraced the minor road on foot we,d driven up through fields of colourful pheasant's,cows,partridge,  rooks and a few nervous roe deer.After a mile this changed to a track through Caledonian pine forest,the sun came out,the wind dropped and it felt like an autumn day again instead of a deep freeze. 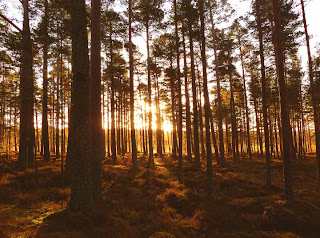 Although I didn,t have a map for this area we had passed the Muir Of Dinnet Nature Reserve and this was where I was now heading a few miles back down the road. I soon found a grassy track that led through the woods and took me out at Loch Davan.See map below. 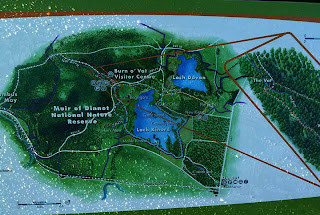 Over the years I,ve been all round the Cairngorms, mainly climbing, walking and backpacking at high level in the past so it made a nice change for me to do some low level stuff.I,d never done before.This whole area has been sculpted in the past by glaciation of course.This is a subject I,ve got more into recently finding,somewhat belatedly,that to really understand the landscape you are looking at it helps if you know a little of how it was formed.The two lochs here are large Kettle holes formed by stranded lumps of ice as mentioned in my Renfrewshire post a few weeks back.Some of the Nature Reserve is made up of rows of Eskers,snake like ridges between 5 to 20 metres high caused by melt water channels inside the glacier leaving these winding heaps of  pushed up moraine behind.As I,d already discovered there are good examples of these features around Falkirk and
Carstairs.http://www.scottishgeology.com/outandabout/classic_sites/locations/carstairs_kames.html 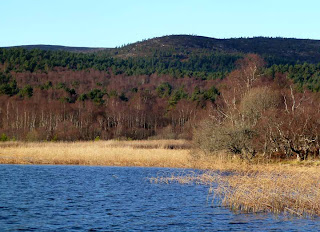 This is Loch Kinord which has a trail you can walk round and several helpful information boards dotted about which explain the landscape you are looking at.It dovetailed nicely into my own current interests.
Years ago I,d watched a strange but  compelling film called Pi about a mathematician who believed there were set patterns everywhere in nature.Mathematical equations in fact. They were not random and if you could only see these patterns of numbers you could understand the very rules of nature itself. Its an unforgettable, bonkers film.A work of fiction ,but it came back to me suddenly during this walk.For those interested in what its about. .http://en.wikipedia.org/wiki/Pi_(film)
Don,t think there,s another film quite like it.Seemingly Inspired by the true story of two brothers who built a supercomputer inside their house, then grew increasingly obsessed with cracking the secret of Pi. Kate Bush also wrote a song about it on her jazz flavoured CD Aerial. 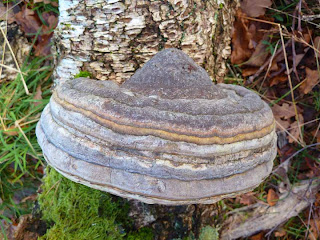 Anyway...This is a bracket fungus with layers of growth on it just like the tree it grows on has growth rings inside. 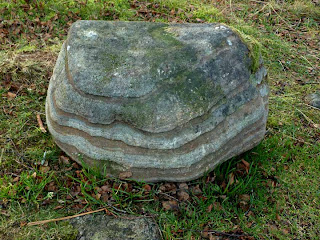 This is a stone found near Loch Davan.Do stones grow? :) Probably formed by layers of lava cooling and contracting perhaps,or some sort of pressure.Just a guess.They both look like hamburgers with a cheese topping layer on the fungi. 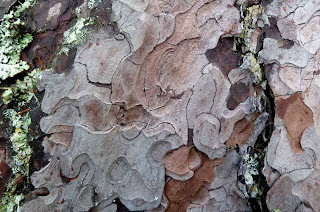 A Scot,s pine tree.The bark (lower left) looks very like the way jigsaws are made.Were early jigsaws inspired by these natural patterns as they would have been hand carved originally by people familiar with all types of wood?.Or is that idea too far fetched?
The Ceilidh.A traditional Scottish affair.Many of the dances seem to mimic the natural world around.The figure of eight movement resembles bees in a hive which do a similar dance with other bees watching to tell them where the best flowers are.Likewise both arms raised high and curving during certain dances are just like red deer and antlers.A lot of the early inspirations  must have came from nature.Seeing patterns that produced a spark of inspiration for something else. 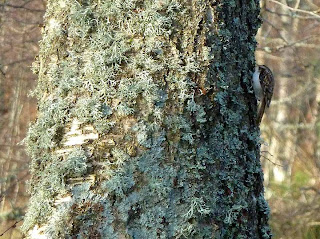 I spotted this tree creeper nearby.A bird that has been called a flying mouse as it creeps round and round a tree starting near the base then spiralling upwards looking for spiders,incests and seeds til it  reaches the top of the trunk then off it  flies to a new one to repeat the process.It even likes to nest inside the bark and sleeps squeezed into a crack or crevice,often in redwoods which they love.As such its body is flattened.Hard wee bird to get a chance photo of as it flits round to the other side of the trunk as soon as it spots you so I,m fairly pleased with this. 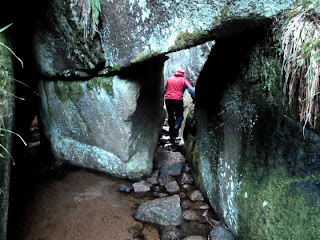 I rejoined the others for the walk into the Burn O Vat.Having done their Corbett they were now happy to indulge in some low level stuff.Its an interesting  formation, only a short distance from the road..Formed in a similar way to the Punch Bowl. .ie rocks finding a fault in stone then swirling around over countless years to create a depression then ,in this case, a large chamber.I,ve seen similar structures deep underground,caving in the Mendips and Peak District many years ago.They were still filled with water but this one had  only a little burn now and was filled with sand and debris.If you emptied it out it would probably go down 10 to 20 feet more.You can see the top edges here. 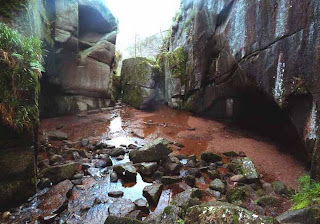 The entrance hole we came in through is just left of the boulder in the top middle of the picture.That gives you some idea of the scale.A good day for all concerned.The rest of the hillnabbers arrived back at the hut at various times depending on how far the walk and drive was.The night passed with cards,books, food and swally.
Graham,Gordon and Phil arrived back in the dark,looking suitably drained I,m pleased to say,two new Munros to tick off.
"Wasn,t hard." they told us,peeling off numerous frozen layers to sit at the fire.
"I know.Told you it wasn,t" We replied.
"Heard you didn,t do a hill today Bob?.Were you sick?"
Tis the duty of each new generation to walk over a carpet made up of the feeble  groaning bodies of the last.Such is life! 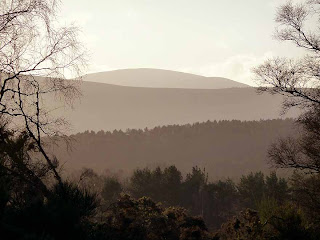