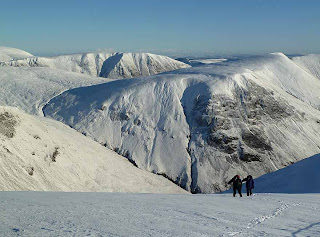 As I type this with winter gales and rain yet again lashing the side of the house Sunday the 18th of December 2011 seems a long time ago.Before my surprise Christmas present of a speeding van smashing into my legs and ribcage (thank you kind pedestrian hitter. Its the gift that keeps on giving with free drugs and hospital visits thrown in as extras)  and before all the snow melted and turned everything grey and sodden again Scott had the  idea of doing something interesting and adventurous now that the white mantle had arrived. Alex then had the perfect idea up his sleeve which would combine a Corbett and a Donald with a sporting day out.
At 808 metres( 2651 feet) Hart Fell is the highest point in a rugged area of hills with deep gullies and cliffs  not usually associated with the  rolling Scottish borders.Its more like a forgotten and special part of the Cairngorms.Moffat is the nearest town which we passed on a fine winters morning, sun sparkling on the heights around.It was a few degrees below zero but with little wind present, even high up, it was fun in the sun. 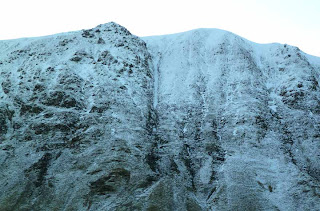 This was the first idea.A grade one gully only a little way up the scenic valley of Black Hope. There was not a lot of snow in it thankfully so it was given a miss.I for one was glad as it looked bloody hard work, steep ,knackering and in the shade coming only fifteen minutes from the car.Next up,,further up this valley, was a grade one ridge which looked  more promising, bright sunshine ,steep and plastered with snow between Upper Coomb Craig and Nether Coomb Craig.Now this was more like it. 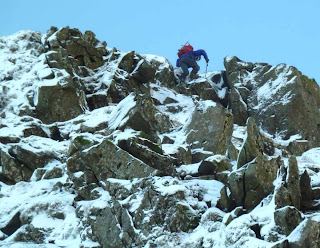 The first section was surprisingly steep taken direct but with plenty of good holds.Alex led the way  climbing up with just boots and ski pole while Scott and I stopped to put on crampons.Sometimes when you have a choice of  using Ice axe or ski pole on a route they seem to get in the way of each other so I had as much of a tussle with them as with the climb,finishing that section with the ski pole relegated to a supporting role clamped between my teeth like a pirates sword as I pulled over steep boulders. 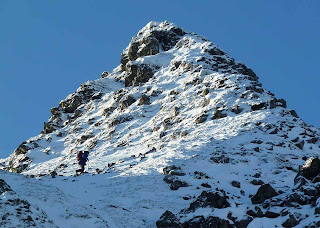 Alex was storming ahead,keen to get bagging.This is the middle section of the ridge.Although fairly short it had good variety to it and was a cracking way up Hart Fell. 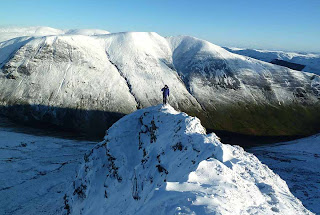 On the Arete section looking over towards Redgill Craig and Rotten Bottom.Quite airy in places. 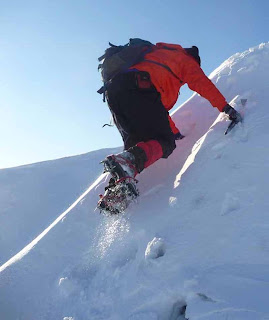 A rare picture of me in action.Thanks to Scott for the photograph and for making me look good in it. Yes..New jacket folks! 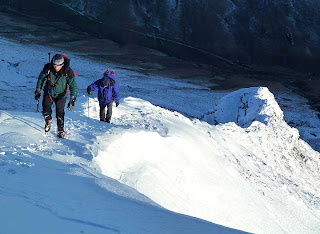 Scott and Alex nearing the top of the ridge.We all enjoyed this way up.It was just hard enough to be interesting without any real difficulty involved. Another reason  for climbing the ridge,if we needed one ,was the evidence of several small slab avalanches in the vicinity.Sometimes easy ground isn,t the best way up. 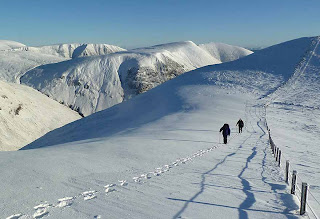 Above the ridge It came as a bit of a shock to realise we still had a good distance to ascend before we reached the summit.You tend to think of these hills as smaller somehow but this one was hard going in ankle deep snow.Luckily two folk had  been up early and left footsteps for us to follow. We spotted them in the distance eventually  several ups and downs later.Two dark specks in a white and blue world. 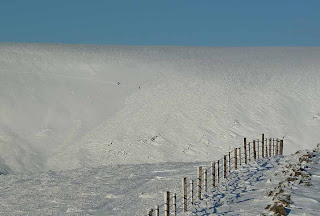 Snow makes all the difference to this landscape giving it a real epic scale. Some fantastic views from the summit.Alex then made a detour for his Donald. 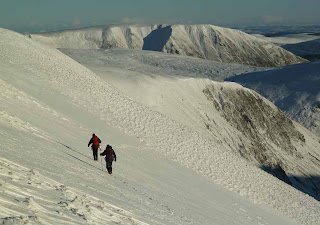 We descended down hard snow slopes which we had to dig into with the edges of our boots to get any purchase.It was the way mountain winters used to be.Scott said later it was one of the best hill days he,d had all year.High praise indeed from someone still in the prime of his mountaineering life.
If all Corbetts were as good as this one I,d be a convert.Nuff said.
Thanks to Alex for his insider knowledge and spotting a great way up a hill. 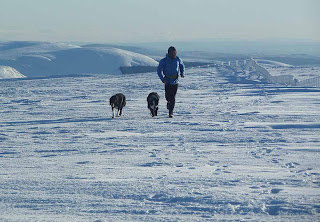 Even met this fell runner out with his dogs.A fantastic day out.
Posted by blueskyscotland at 17:24

Hope you are not too hurt with the accident, I've noticed there's a lot of careless driving this winter. Thanks for sharing a fantastic day out! I will file that ridge away in the memory for next time I head for Hart Fell. Just wondering where all the snow and sunshine has gone now the holidays are here...?

Cheers Robert.
Hart Fell is a great hill.
At least no bones were snapped but
it,s a slow process getting better.Watching loads of films and playing music as I,m not fit for anything else at present.At least I can shuffle to the shop for messages every few days so I,ll not starve.
bob.

That's awful about the van hitting you - hope you're recovering!

That looks quite a scary ridge for a mountain coward - what would it be like in summer? I can't imagine it being near Moffat looking at those photos! I haven't been down that way much - hope to start that kind of thing if and when I complete the Munros. My friend Richard certainly has his eye on those hills in that area - has had for a while.
Carol.

Hi Carol.
It could have been much worse if it was going any faster.Superman makes it look so easy stopping traffic with your body.
It would be just a nice grassy ridge in summer and a good way up.That area also has the Devil,s Beef Tub and the Grey Mare,s Tail nearby.The Mennock pass- Leadhills area is also worth a visit.Great sweeping doorknob hills plus interesting history.There,s still life after those Munro,s and its a lot closer as well :)
bob.

Some great pictures here Bob.
While my dad was still alive and active he always talked about taking me up Hart Fell which he'd climbed many times.I might get up there yet.

More snow on the way, apparently. You a choice day for your endeavours in a fine area of hill country, Bob.
We tried a long walk in to Hart Fell from Talla reservoir some months back, but were thwarted by an unfordable burn. Next time we'll try Alex's route.
I like the colour of your new waterproof, Bob. I only buy stuff in the sales, so I just bagged a bright orange waterproof for half price - I guess no-one else could handle the ferocious colour. Bring a bit of colour back to the hills!
How's the recovery going? I hope the individual responsible feels guilty as hell. The risks some people are prepared to take with others'lives when they're behind the wheel beggars belief.
All the best for a speedy recovery, Bob.

Hi Bob
What a cracking day out. Just been looking at the maps and would never have known there was such a magnificent rocky corrie in the Southern Uplands, that arete looks truly magnificent in winter conditions.

Best wishes for a speedy recovery, sounds like it could have been a hell of lot worse
Andy

Hi Pete.
Snap! My new jacket was half price in a sale too probably for the same reason.It might grow on me though I doubt it.Getting better slowly.£19 quid return rail tokens for anywhere in Scotland when you shop at Sainsbury now on.That,s a good deal.They are valid up to end of March.Worth getting your messages there in the next few days.Multi day City breaks or bothy tours look possible.