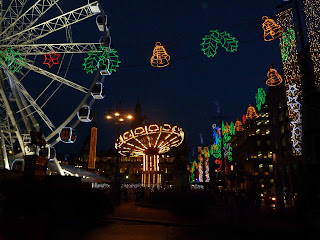 Just a few Christmas Photographs taken before I was confined to the house.Glasgow,s George Square was Looking very colourful this year in a bid to attract shoppers into the city centre and away from the out of town shopping complex,s that are killing most high streets UK wide. 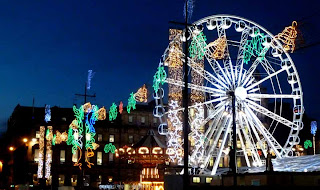 This year they have invested in fairground style rides.Unfortunately the weather over the festive period has been so poor,almost three weeks of constant rain and winds, that it has only highlighted the benefits of having all the shops under one large roof.Its not much fun spinning round in gale force winds and rain so I doubt if these children friendly rides made much of a profit this year.Shame.Even the big curling event in the Square had to be cancelled due to warm temperatures after two years of sub zero winters previously.Just  goes to show though...You can never predict  mother earth,only roll with the punches:) 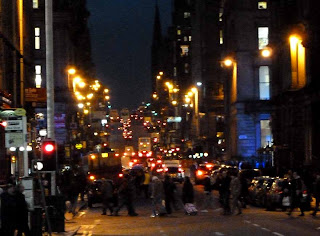 "Footfall" in Glasgow city centre.Notice how all these buzz words seem to get imported from America.How every shop assistant  in a large store now says "see you later" (It,s that family thing to show we really care) Most bank people ask "Doing anything interesting today?" or words to that effect (because they are looking for an opening to sell you something else)Businesses say  "get you out of your comfort zone"(ie. it,s something new we are bringing in, you wont like it but hard luck we,ve picked you to do it"
Whatever happened to that old favourite" Not fit for purpose" I wonder?Maybe the saying itself is....
anymore. 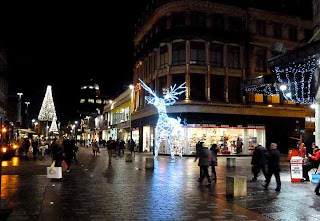 Argyll Strret lights.Compared to years gone by this street was looking fairly empty in the days leading up to Christmas. 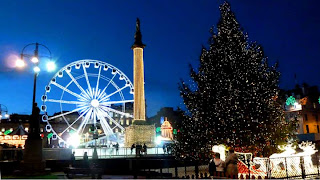 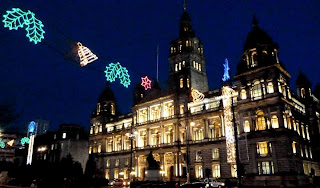 Glasgow City Chambers.Home to the Council and The Lord Provost of Glasgow.May his gold chain never rust! 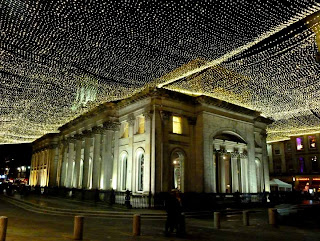 Under the Golden Mesh. Royal Exchange Square.This Is The GOMA. Gallery Of Modern Art ....which sometimes  has interesting and thought provoking exhibits.... and sometimes not. 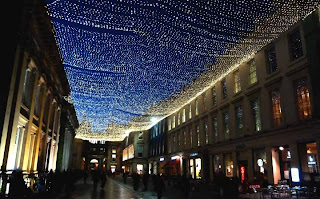 Same Place Showing the style shops and restaurants.Never been in any of them,don't eat out...never been in more than a dozen hotels in my life,prefer camping....only buy what I need and always have done..Rarely put my heating on in winter....Only use credit under protest when they wont accept cash  .Yes Sir...the UK economy is safe in my hands :) 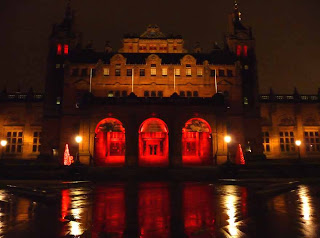 Kelvingrove Art Gallery and Museum.Looking very spooky at night.One of Glasgow,s best loved buildings and still free to enter.Generations of people have taken their sweethearts,children,parents,relatives,and assorted others here.Always entertaining.Great way to pass a few hours on a wet day. 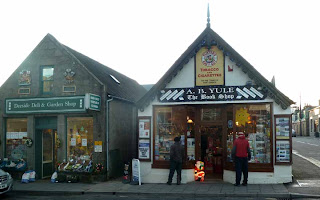 Some of the shops at Ballater taken on a recent visit before Christmas.A town that has thrived since Victorian times due to  the Balmoral estate and the Royal family highland residence being close by.Most of the shops in this town have a" By royal appointment " ornamental crest above the doorway.Shopkeepers strive to have Royal biscuits,Royal tablet,even Royal napkins appeal to the taste buds or eye of these famous castle dwellers up the road.This in turn attracts hordes of tourists every summer keen to "shop like a Queen."
When you think about it....This is where the entire cult of celebrity first began. 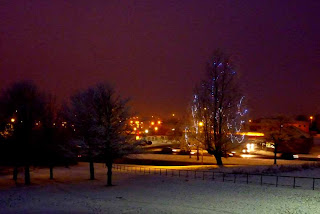 Wishing you a Merry Christmas and a happy year year for 2012.
My new years resolution? Get back on those hills again. I.m starting to get cabin fever!
Posted by blueskyscotland at 11:01

Nice pics of Glasgow. Did you need a tripod? I planned to take some pics like this on Tuesday but got as far as Waverley and the station was completely shut due to high winds...

Hi Robert
No. Just hand held with the sport setting used in a few to get a fast shutter speed and a clearer image.I,ve found the best time is around dusk as after that my camera fails to pick out the surroundings away from the lights.
I,ve always wanted to take some night shots around Edinburgh...maybe some day.

Nice festive shots Bob, I like the golden mesh, never seen that before.
It's difficult getting good night shots.
My last camera Fuji S700 was great at taking night pictures on a tripod with a remote control cable.

Cheers Jim.
I do my best with what I,ve got.You can end up spending a packet on the technical side of camera equipment.I,d rather save that money for trips outdoors instead.For me that,s what,s important.I suspect you are much the same.Even if I could afford the best gear there is so much more faffing around with it I,d just lose interest and want to be walking instead.The point and shoot method suits me fine for now.