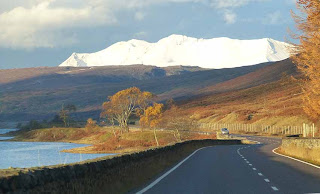 For once it was an excellent forecast as we drove North to take part in our mountaineering clubs monthly winter adventure.This time it was to Invercroft, a mountain hut near Achnasheen.Superb views all the way up.This is Beinn Eighe, one of the Giants of Torridon. 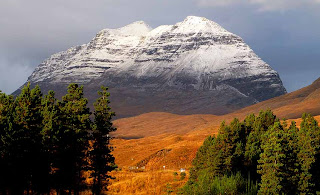 Liathach.In most peoples top ten favourite Munro's list, including mine.Probably my no 1. 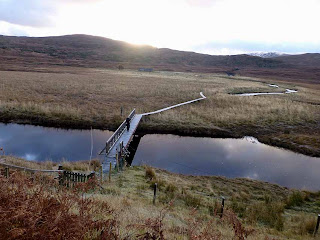 The hut is in a great position within a short drive of some of the finest mountains Scotland has to offer.It sits on a flat area of marshy ground reached by a board walk.A club member was once blown off this years ago into the swamp below trying to reach the hut at night in gale force winds. 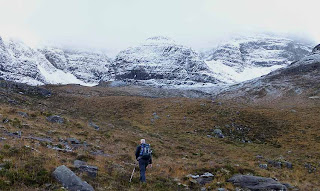 Our destination the following morning however after an eventful Friday night drive up was this more obscure Jewel.Beinn Bhan on the Applecross Peninsula.Many of the older members of our club have completed their Munro's and are now bagging Corbetts.This is one above.My old mate John who although bald as a baby's ass should be called Young John as he's ten years younger than me.
Alex was bagging a couple of Corbetts nearby I'd already done.I,d also bagged Beinn Bhan years ago.Once via a long, excellent and scarily vertical  V Diff rock climb called Cioch Nose. 450 feet (135 meters) of torridonian sandstone put up by Tom Patey and  Chris Bonington in pre- knighthood days,and once by the sedate and stately ramble from the top of the Bealach Na Ba (pass of the cattle).
I remembered this fondly as a lovely easy bimble at a gentle gradient ,the car taking most of the altitude involved til you arrived on the edge of the fearsome chain of buttresses surrounding Beinn Bhan to the North and East.This is one of the greatest and longest rock amphitheatres in Scotland,making a mockery of the fact it doesn't reach Munro status and therefore invisible to a large section of the outdoor fraternity.
I cant gloat however as the Applecross OS map is one of the few I don't have in my collection.If I remember rightly a lot of it was sea and I grudged the money when it disappeared the first time around. 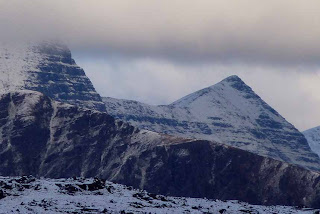 I jumped at the chance of an easy  but spectacular day strolling across a rising plateau to the summit ridge.This would make a cracking day I thought to myself.Unfortunately my young companion had other ideas.He had in his possession a Corbett Book  which suggested this lovely high road pass stroll was far too easy for proper mountaineers of his calibre and that a sea level start ,a long hike into the furthest buttresses from any human habitation then a near vertical scramble up a snow covered monster pyramid of rock was the only obvious line of attack.
Never fond of it before I've learned to hate that ******* book with a passion!!! 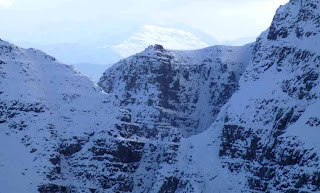 Much fun and excitement was had scrambling up knee and thigh deep snow above vertical drops with him forging ahead, ice axe gleaming, and me crawling on all fours,howling like a dog in places behind him.I was not a happy bunny as my balls seem to have shrunk considerably since I started doing Marilyns and low lying scenic islands.Where once I would have enjoyed hanging above a void in full winter conditions like this my stomach contents were the only things liable to be voided nowadays.It was too cold ,too steep,too exhausting, too fast a pace and too far.
If he'd done a tenth of this to a fat old man sitting on a sofa in a care home he,d be jailed immediately following a national outcry.It was pensioner abuse of the highest order.

The horns of Beinn Alligin seen in the distance.All around were amazing views between bouts of intense spindrift which, while they lasted , meant we couldn't see either the holds or the drop.
'When will it end?' I wailed repeatedly only to be told I should move faster to avoid being benighted up on the ridge. Eventually I crawled onto the summit plateau to capture this photo of spindrift flying out the coire driven by a strong wind.Thank God I thought.Easy ground at last.
'No time for a lunch stop.' I was told. 'We need to do the arete in daylight.'
'What arete?' I was bewildered as I couldn't recall any arete the last time I was up here.
'The Corbett book recommends going over the summit ridge then following the edge of the cliffs down the shoulder before dropping off the steep end back to the car.'
I was too slow and weak to throw it into the abyss so it went back into his rucksack again.My Nemesis had a lucky escape. 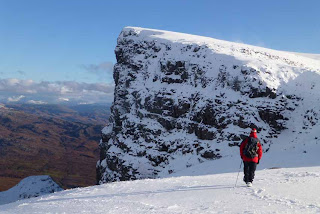 Eventually we reached the highest point along this monster line of cliffs.The summit of Beinn Bhan.
'Better keep going It,ll be dark soon.'
When will it end?' I wailed again.
'You're not the man I remember 'John informed me.'You're bottle's crashed for hard stuff old timer'.
I took a swing at him but he was on the move again,only stopping to pat the trig point.He was obviously getting me back for calling him a 'baldy napper' on last weeks blog. 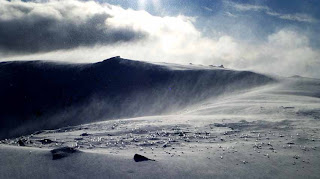 There were some nice snow effects walking along the ridge line so the photographer in me went into autopilot despite my knackered condition.Spindrift,ice crystals and sunshine together. 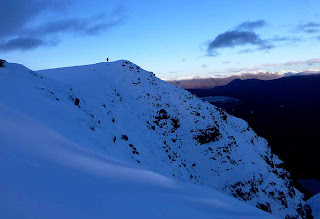 Further along the ridge. 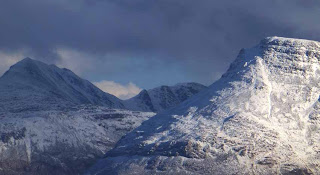 Looking South and west towards the mountains around the Ben Damph forest region. 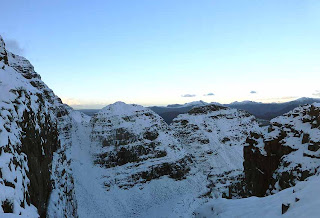 View back along the cliffs looking North. 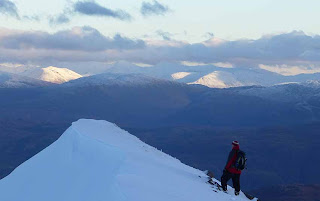 Part of the short but buttock clenchingly steep arete. 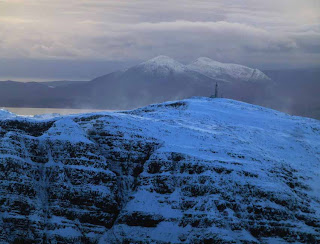 View out towards Skye from the arete. 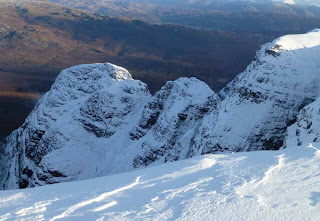 Above the Cioch where the V Diff rock climb comes up then follows over the pinnacles to the summit.
'When will it ******** end?????' I wailed.as the sun was dropping behind the mountains by this stage.
'Good news! We're beating the guide book time.'John declared. 'Don't ease up now gramps!'
Eventually we stumbled off the hill,  just reaching the car as it became fully dark.He still alert for driving....me a broken husk of a man,drooling and staggering along the ditch,unable to even find the tarmac.
Marlon Brando,s mumbled words from Apocalypse Now sprang to mind  when I was asked in the car if I'd enjoyed a proper mountain day after all those pipe and slipper hills in the central belt.
'The horror. Oh ,the horror.'
Still at least the photos turned out well.I cant look at them though without graphic images of the suffering and pain involved in their capture springing to mind.I still have flashbacks several days later and wake up benighted ,bewildered and discombobulated on the top of an icy spire of rock,my ice axe ,boots, gloves and hat slipping away into the black void below.
A typical day out nowadays with a much younger mountaineering club.Sooner or later I'll tumble from my illustrious perch and they'll split the best of my gear between them then kick some snow over my frozen corpse. If they are not in a hurry to bag another peak I might even get a small cairn. Such is life.


Danny Mac Askill bike rider .Amazing video of a journey from Edinburgh to Skye along the sunshine coast I know so well.Like this guy's taste in music,he always puts interesting stuff on his videos as a background to match the action.For those who haven't seen this its an eyeopener.

If you liked this tale of mountaineering adventure my tongue in cheek boisterous comedy novel about an unusual Glasgow outdoor club, based on my life in the mountains around Scotland and Europe is now available in Kindle bookstore at a bargain price of £0:98 pence digital... or £9:39 paperback. Each chapter is a separate tale in its own right. Autohighography. Bob Law. 500+ pages and the first couple of chapters are free to read to give you a feel of it, in this link. Each chapter is illustrated with original colour photographs, many taken in lesser known mountain regions.
http://www.amazon.co.uk/gp/product/B00JNAIGAO/ref=s9_simh_bw_p351_d1_i1?pf_rd_m=A3P5ROKL5A1OLE&pf_rd_s=center-1&pf_rd_r=17E594P8QRW0Q69BK8WW&pf_rd_t=101&pf_rd_p=511296287&pf_rd_i=341689031
Posted by blueskyscotland at 16:24

Not sure I recognised much of the story. Maybe I had a different perspective. Great hill, great weather and great company.

Looking forward to the next one old man. I reckon you still have a few more in the old bones.

straight from the den said...

"It was pensioner abuse of the highest order."

Hello Anon.
Wait until you reach my age in another ten years then see if you're still so keen on snow covered scrambles.
Ps Ditch that bloody book.Its the Devils Work :)

I'm still laughing at your comment about not buying that map 'cos it had too much sea and so wasn't value for money - that's exactly what Richard says about those kind of areas and he refuses to buy them too! ;-)

That sounds a scary route and scary conditions - wouldn't have suited me. And Liathach's about -1 on my list - or perhaps 10 on my 'most fearsome peaks' list! :-o

That Danny MacAskill is some rider eh? I seen The Jezebels who do the second song in the video. Check them out, great band live.

Cheers Carol.
There's a few maps like that which I usually try to borrow from the local Library if I know I,m going in advance.

Hi Mike.
Already checked them out on you tube.I,ve seen Glasgow band sons and daughters a few times live.
I read Danny has had a couple of bad falls but he's still out there jumping.
He broke his collar bone riding then tripped over just walking down the street in Edinburgh which did a lot more damage falling onto that same injury so he's probably safer on a bike.

Pensioner abuse ! bum clenching ! all sounds a bit triple x Bob. I reckon you'll be dreaming up some dastardly scheme to get your own back on the 'Baldy Napper'.
Great pictures, I reckon I saw Cameron McNeish climb this one summer on the T.V.

Always enjoy watching this video of Danny. He was down in Galloway earlier this year, but I was away and missed seeing him. He's one of a kind.

Smashing blog Bob, and superbly illustrated with you excellent photos....I really felt as though I was there and suffering the pain of it all. All the best, Ron

Cheers Jim Great video.
I have now invested in some proper winter walking boots as I did that scramble in my usual summer fabric boots which were rubbish on snow.
Ended up with a cold as I had wet feet all day.

Thanks Ron.
Dont worry we can make that a reality for you too.Jaggy mountains here we come!

P.S. I was also going to mention that I was passing that boardwalk on a regular basis the other year when I was trying to get stuff done on a few visits to Glen Carron and they were building (or mending?) it. Some bog that!
Carol.

Worth it for the photies - ive yet to climb Beinn Bhan but it looks like the guidebook route is a cracking one... might only be a Corbett but it out punches most Munros!

Hi Carol.
Looks as though it takes a lot of upkeep.It was actually drier than in previous years.I,ve been in when the hut was almost an island.

Hi Robert.
Good for a younger guy like yourself.Grade two first ridge scramble, grade 1 or easier our route depending on line taken up the buttress.