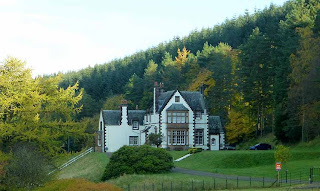 Where the hell are they you might ask? I certainly did when told of Alex's cunning Plan to do some hills down in the borders.All four lie in the scenic valley containing the Talla Reservoir and the Megget Water.This is a popular circular 52 mile bike route on minor roads from Peebles and takes in the building above ,Victoria Lodge ,which is up for sale at the moment.Terrific period structure not far from the A701.
Biggar is probably the nearest town of any size or Broughton, which is smaller. 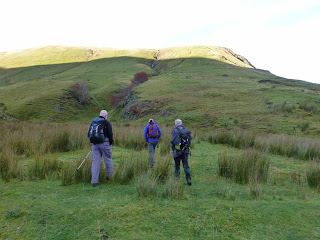 A cracking sunny day of light winds saw four of us set off.Myself,Alex,John and Ron.We have enough folk out on the hill today to form a club and after much head scratching I thought of a perfect title for it. 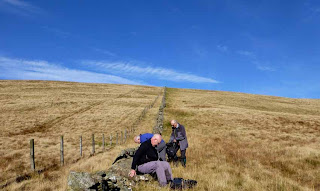 The 'Baldy Nappers' I shall call them.Just like Hitler,a small ,unfit ,dark haired man surrounded himself with tall blond athletic types I seem to be slowly gathering together a group of grey haired, half bald men of smart appearance and smarter intellect to make my own unfit ,dark haired, dim witted tramp look all the more impressive.As we strode up the first hill, Garelet Hill, we made a fine sight for the few curious natives tending their square sided sheep.This might catch on I thought to myself.In the near future I could see me leading a  large army of  grey haired, half bald pensioners across the hill ranges like Hannibal led his elephants,until we marched on London itself to string David Cameron from a lofty tower of zimmer frames by his balls,feeding his 'Lets go teach the poor and sick a lesson every time we get in' mission statement he inherited from Thatcher up his rectum. 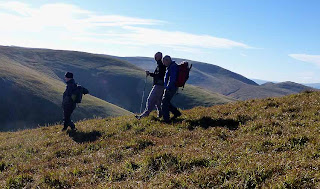 Fine walking over a nice range of hills.No doubt they are Marilyns or Mabels, or Grahams or Grumbles or something of that ilk.Life's too short to look them up.Those who care about such things will know and treasure them. To train them up for storming those sordid houses of injustice I let them continue over to the summit of Garelet Dod while I sat in the sun below barking drill orders and marching formations. Why use grey haired men and hills? Surprise attack. From a distance an army of thousands cunningly bent at an angle in grey suits will just look like a harmless fluffy mist approaching.Then ,full frontal ,the sunlight will radiate off  all those super smooth bald domes blinding the enemy until its too late for counter measures. Sneaky eh? 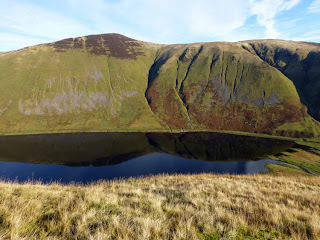 Talla Reservoir.
If they rumble us too soon we can just claim its the latest Atos test to get disabled folk crawling over mountain summits to prove they are flexible enough for full time employment.
Anyway.Halfway down this glen we discovered a bothy.A very nice one though it didn't have a fire in it. 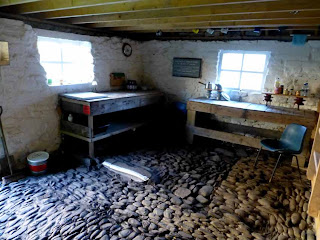 Had a wee rest here. 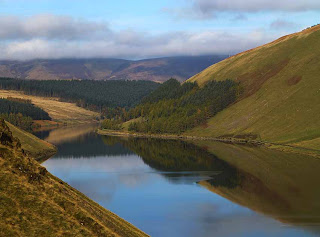 It was a day for reflections.Looking down Talla Reservoir. 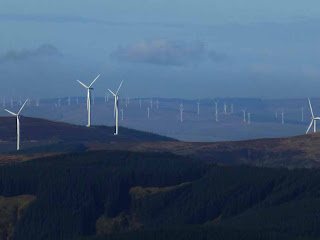 And windfarms.Loads around here.A view of Scotland ...coming to a hillside near you soon no doubt. 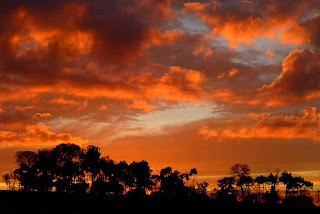 And a great sunset to end the last post of autumn. 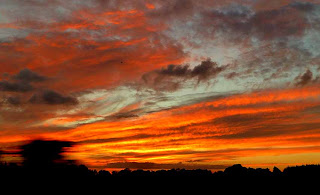 Turned out to be one of the best this year in fact.
Todays Video is a catchy little number by Lykke Li. She's a Swedish Girl who grew up on a mountain top in Portugal. She's already collected several Best International newcomer awards for her music and also seems to be ahead of me in the training of pensioners with her school already well established.Cameron....We're coming to get ya!

That Talla Reservoir looks really nice. Me and Richard liked Biggar when we stayed there recently to do Tinto. Really nice town and we stayed at a really great hotel/pub with great food. The weather was bloody awful though!

Hi Carol.
Biggar is a great wee place.Tinto is a lovely hill climbed from the south.Had a week of great sunsets up here though its turned really cold now.To quote Game Of Thrones...Winter is coming.

I remember back in the 90's visiting the Talla reservoir with my dad . Loved the scenery around Moffat, and remember great fish and chips.
Have also dined in the the Tinto House Hotel a couple of times. I can recommend it.
Best wishes for the Baldy Nappers club, long may it reign.

Cheers Jim.
Its just a joke title though as I cant see the others being too keen on it.Moffat is a lovely place.
Next post may be even closer to your own backyard.

Haven't heard of these hills before but it looks a nice round. There are some really good walks down that area; I really should go there more often instead of chasing Marilyn's all over Scotland!

Hi Neil.
That's the thing about Alex.He always finds scenic areas off the beaten trail.I would never have thought of these hills either but they do make a fine rolling ridge walk.The descent down the valley of the Gameshope burn is beautiful and dramatic as well.

I sure am going to miss all these scenes come winter. There will always be a next year but the seasons comes too short for my taste. Great photos and I love them all. Thanks for sharing all these. It made me long for another year in this wide green earth..