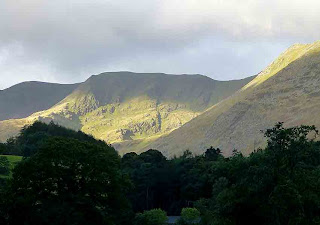 Saturday was a better day with a mixture of sunshine and brief heavy showers.These were supposed to clear by lunch time so we set off at 9.00am.This is the view from the hut. 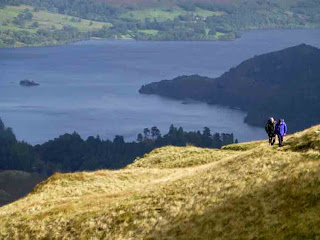 Four of us set out.Myself, Alex,Graeme and Alan.This is Alex and Graeme with Ullswater behind.Weather was sunshine one minute brief cold shower the next.Typical autumnal weather. 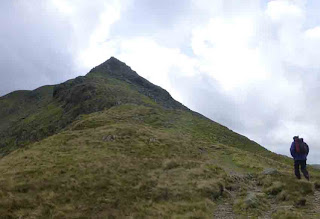 We picked this horseshoe as it was right above the hut,looked good, and was new to us.Last year down here we had traversed Striding edge,Helvellyn and Dollywagon Pike in a howling gale before coming down Grisedale.This is the southerly continuation of that mountain chain.At our age we probably will not finish all the mountains in the Lakes but it gives us a target to aim for and its fun trying.
You need a reason to get up in the morning and this is ours.Not as bad as last time but still windy on the summits which helped move the showers through quickly. 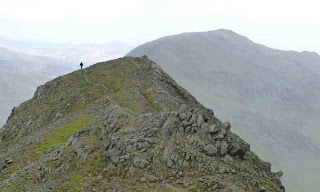 Graeme on Cofa Pike just before the final climb up Fairfield.A nice rocky ridge and a great mountain.St Sunday Crag is a fine way up the horseshoe as well. 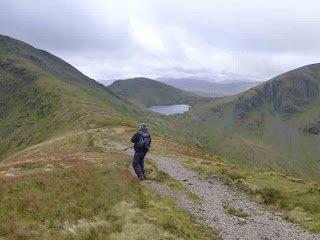 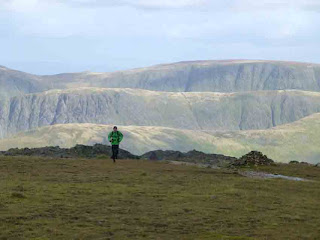 Fell runner on the summit plateau of Fairfield with the High Street range in the background.There is definitely a different quality of light to the Lake District hills compared to Scotland.When its dull and miserable in Scotland it tends to be duller and greyer somehow.These hills have more colour even in poor conditions.We observed a lovely rainbow.Also met a lone women who told us she sings in a choir.Alex being Alex he soon found out it was a famous London one who back celebrities on a regular basis.Always amazes me the ease with which Alex can meet strangers and find out all about them in casual conversation.Its a gift.
Anyway,as we were going at the same pace we all walked together to the summit of Fairfield. 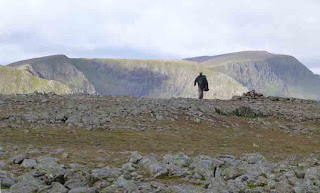 This is the broad summit of Fairfield.We then headed over to rydal head and Hart Crag.The rain had stopped as predicted and the sun came out for the rest of the day. 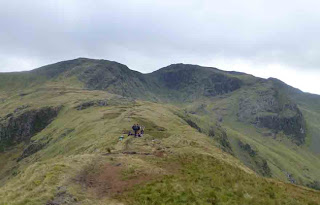 Our return was via steep wet slabs down onto the lovely long ridge of Hartsop Above How looking down Deepdale at the three lovely villages of broken biscuit,newton sludge and butlers balls. 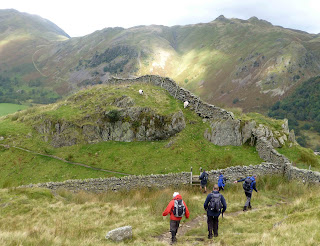 This is four Liverpool guys we met coming off the summit of Hart Crag.Its a sterotype to say that folk from Glasgow,Newcastle and Liverpool always get on well together but in a lot of cases its true.All three cities shared a working class dockland environment in the past and have well supported major football teams with large council estates and  also share a strong Irish element in the mix so theres a common thread of identity there right away.The Lakes are only an hour and a half drive from Liverpool seemingly.I,ve heard a few people on TV recently trying to include Manchester in this northern triangle but they are too far from the sea.A ship canal doesn't count.Sorry. :0) 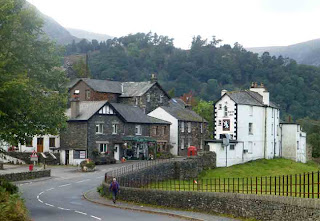 There,s not much to Patterdale but it has what you need.A well supplied local shop and a couple of pubs.At £7 to £15 a round depending on numbers involved we cant actually afford to drink in pubs much these days...the last time was in Knoydart in May but as it felt like a holiday we went in here for a few cheeky beers before heading back to the hut.
Another cracking day out.One more to come.
This weeks video is one of the strangest I`ve ever seen.  Laibach.  Across the Universe.
Stumbled across this looking for another singer with a similar name. Great singer. great song,... But It looks suspiciously  like an advert for a new Hitler Youth  style 4th Reich.
Top tip folks. Please don't phone the number given at the end.A strange man with a funny accent in a big hood will probably ask for money to train up his 'Boys.' 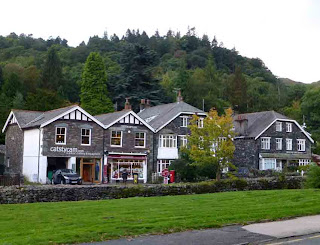 Not a bad day out Bob. Eh,it`s not a gift,it`s just that I`m nosey.!
I can never get by these captcha things on blogspot so hope that I got it right this time.Have given up trying to comment on Neils blog amongst others.

I was taking the word captcha off but then I was getting loads of unwanted crap cluttering up my e mail tray.Its easy with a magnifying glass I find.Its now off again.
Never mind that...What about the video?

There are some great horseshoe walks in the Lakes. I particularly like the one that takes in Grisedale Pike and goes out almost to Grasmoor. Best in the spring and autumn though; there are too many people about in summer for me and these narrow roads are a nightmare. Hadn't noticed High Rig before; looks a goody, must put it on my "to do" list.

Hi Neil.
You tend to forget how many great mountains there are in the Lake district.
I had to look up Jim's Newlands Valley.Another new area I,ve not visited yet and its right next to Grisedale Pike.Your walk looks a cracker.

Out of all the places in the Lakes, I like Patterdale area one of the best - but get to visit it almost the least! :-( Not sure why - probably 'cos I haven't really got anywhere great to stay (I don't camp in Britain if I can help it).

Most of my 'rounds' in the area are 'the Dodds' down by Brotherswater though. I particularly like them, Red Screes and Gray Crag.

Great views Bob.
I agree about the colour, Lakeland pictures always seem brighter somehow.
I don't recall those three villages you mention, but I do remember Great and Little Cockup hills.

Great rendition of 'Across the Universe', my favourite version of this though is by Rufus Wainwright

Hi Carol.
We always feel excited going down to the Lakes.Its still a new area for us.Alex and myself used to go there with clubs in the 1980s and 90's but it was always rock climbing trips so we only bagged summits if the route topped out near one.I've known him since he had hair and a big zappa number on his face under his nose.

Cheers Jim.
I put them in just to see if anyone stayed awake long enough to read down that far.
One of the things about music is that everyone has different tastes which is why I try to get interesting videos as well.
Your hertzog rhinegold prelude that you sent me the link to is still one of my favourites and may appear on here sometime.

Lakes are good in bad weather because of the variety. There are some places in Scotland similar, glens and forests of the Cairngorms. Glencoe also always looks good in any weathers. I always find Sutherland exceedingly grim in bad weather though.

The Lake District is also good for auld codgers who don't fancy camping in a rain-lashed glen, miles from any facilities or real ale ;)

Cheers Robert.
Don,t like real ale.Cant afford pubs these days anyway.Still capable of 12 hour days though...but in sunshine.Might be my age but these days I cant see any fun in camping in a rain lashed glen.Even 20 years ago I didnt fancy it much.