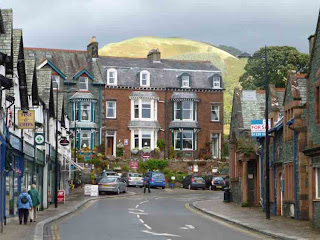 Back in the colourful Lakes once again for the first of our mountaineering clubs annual winter meets.For this one we booked into the George Starkey Hut in Patterdale on Ullswater.A lot of people,even many from England it has to be said,think the Lakes are too crowded ,too expensive,has too many cars, is far too civilised and that the hills are overused and not as wild or remote as bonnie Scotland.This may all be true...but on a wet weekend in late September I know where I,d rather be and its not in some windswept highland bog with three days of rain,sleet and mist as my only companions to stroke,fondle and photograph.

Down In the Lakes you at least have a choice of destinations on grim days like this with almost every height level and degree of shelter at your fingertips to pick from.I,m well past character building romps in wicked weather.
At my age  my character has already been built up in the rain over decades then eroded away long ago so nowadays I love mixed landscapes filled with trees,woods ,rural  farmland and picturesque villages. The Lakes has these in abundance.Hooray!
The Scottish Highlands in good weather has some of the best mountain and island landscapes in the world of course for walking, climbing ,kayaking and cycling ... in grim conditions though....Well, I. personally would rather poke my eyes with a cactus than face three days of bad weather up there....So why not go down to Lakeland instead? 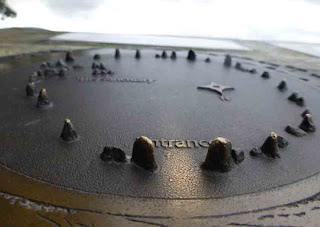 Motoring down on the Friday morning we decided to do Low Rigg and High Rigg Just East Of Keswick.The highest hills were frequently covered in angry squalls of rain and mist but this pair at 360 metres just missed most of the showers and clag.
We parked at Castlerigg stone circle,seen here.A popular spot.One thing about Alex is that he always comes prepared.Having done his homework beforehand he already knew the best places to park to avoid any £7 pound !!! car parks and knew the best tracks up the surrounding hills.Good to be back in his company again now he,s over his  mystery bout of ill health.. 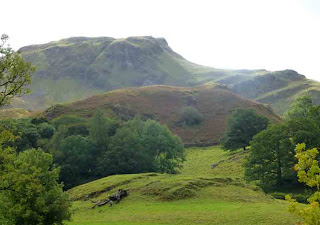 Castlerigg Fell from Low Rigg.For me the great beauty of  Lake district walking is its complexity of different routes and trails at every level from gentle stroll between villages to hard mountain days.Superb lush meadows as we walked over Low Rigg to St Johns in the Vale. 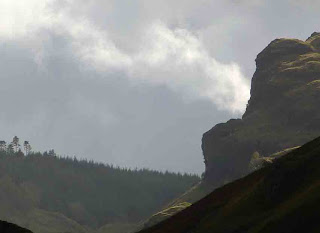 Plenty of big mountain scenery as well nearby whenever the sun made a fleeting appearance and the clouds lifted.It was fairly windy and gaps appeared as the gusts ripped the mist off the higher summits only to close in again minutes later.Very dramatic skies and constantly changing views. 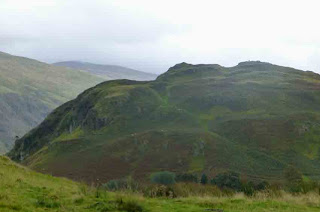 High Rigg seen from Low Rigg. Smashing view of windswept Raven Crag from this higher summit with the great slanting ramp of Overhanging Bastion VS 5a  gleaming in the sun.Later that evening in the hut with the rain battering down I tried to persuade some of the younger club climbers that this north facing monster was the obvious route to do on Saturday morning as it would be dry up there due to its steep nature and open aspect and a good club effort to complete in the rain but they ignored me as usual ,opting for Corvus a mere DIFF tucked away in sheltered Borrowdale instead.
Looking at my old battered guide book however I noticed both Alex and Myself ,Julian ,Brian ,Gordon John and Alistair had climbed Raven Crag routes in flat caps,with only pebbles, large testicles and brass buttons for protection  in late September  in years gone by after  heavy showers.Hope they remember that next time we catch them staring at our middle aged ,hard won, spare tyres as we hug the hut sofa supping beer ,calmly ignoring enquiries as to when our row of babies are due.Titter ye not impertinent youth. I,ll go on a fitness drive when I see some of the younger club members shuffling up Overhanging Bastion or Eliminate A in the snow and rain.
Just because I,m fat and past it now doesn't mean I,ve always limped up pimples and rambled down rose festooned country lanes. Oh No.
Once upon a time I shuffled or was dragged Gibbering up sheer surfaces of rock and ice on a staggeringly successful ,shatteringly sufficient series of succulent occasions.Alliteratingly thrilling ,thunderously torrid tottering torrential tirade of throwaway words dont'cha think?    [He's always Gibbered and Rambled as long as I've known him..He's famous for it. Alex.]
Seldom seen shuffling sun kissed deck chairs!.I,m suddenly a rhythmically rhyming , radically rampant ,romantic genius! Sweet Alliteration where have you been all my life? 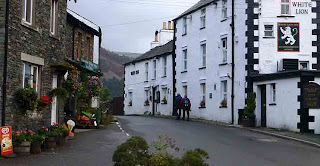 Anyway,when we came down the hill after a great outing Alex went into Patterdale to get the key to the hut. 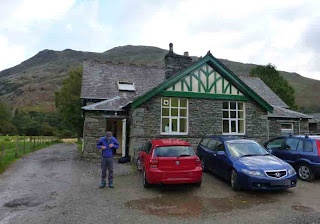 We were sharing this with the Solihull mountaineering club.This is the George Starkey Hut and its very spacious inside.£9 or 10 pounds a night.Still raining yet we had a great day out.I rest my case. 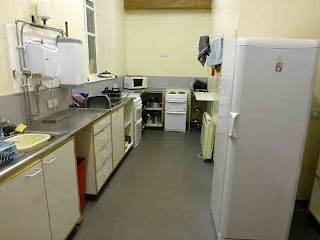 Nice big kitchen.This is only half of it. 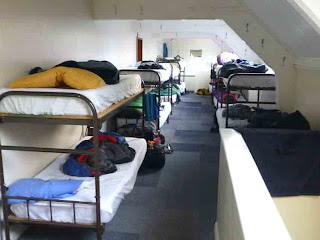 Large upstairs sleeping quarters.The thing I liked about this is the length as you have a better chance of escaping any snoring companions. Best busy hut sleep for years.Fell asleep at 12 midnight -woke up at 7am.Bliss.If I snored myself....Tough! :) 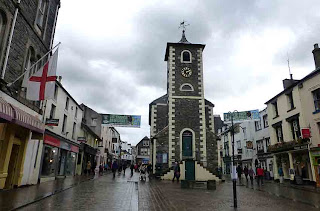 Even had time for a stroll round Keswick in the rain after the hill.Plenty of second hand book shops,hillwalking and outdoor sales to keep us amused.Great first day and the best weather is yet to come.
This weeks video is a cracker folks.
Chinawoman.To be with others.
Russian Girl brought up in Canada,now living in Berlin I believe.
Very unusual song.Even more unusual subject matter.Great voice.
Wifes and mothers lock up your husbands and teenage sons .Husbands lock up everything else.she's coming to get ya!
If you like this another great song from the same person is 'Keep in mind.' 4.03.

Glad to hear Alex's over his illness, good to see you up hills again.
Talking of attire, I'm always amazed by some of the outfits climbing the Lakeland Hills. It's no wonder their Mountain Rescue teams have such a busy time.
If you're fat and past it Bob, I must be obese.
The Solihull mountaineers eh. Don't remember any big hills during my time in Sutton Coldfield. I guess they'll travel to Snowdonia or the Black Mountains to climb.
Enjoyable music, to go to sleep listening to I think.

I've no doubt our walking group will be taking another trip to the Newlands Valley sometime soon. Hopefully in good weather.
.

Hi Jim.
When we were up Fairfeild a young guy lost his rucksack cover which looked brand new.Last seen blowing away in the direction of High Street.Must be a great place to find gear.You could probably kit yourself out with a full set of lost items after a few weeks walking in windy weather :)
I,ll need to post a side view of myself so you can see the flab.

Passed those two hills on my way back from the Lakes on the bus today :-) Have only done them once though and that was when I first bagged all the 'Wainwrights' - I was with my parents at the time so I suppose I could always have a return visit and take Richard next time.