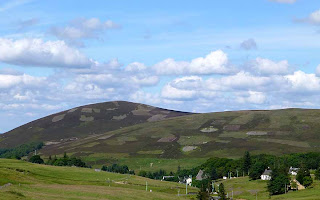 Alex has not been well for the last few months and the last time I was away with him was the Knoydart trip in May.He had some sort of mystery virus/stomach complaint that took time to clear up.The Leadhills -Wanlockhead circular walk seemed tailor made as an easy but interesting outing for him to get back on his feet again.Its only about five miles but you can extend this to a much longer twelve miles by taking in middle moor and the dempster road trail around Threehope height returning over the summit of East Mount Lowther.A classic and interesting day. 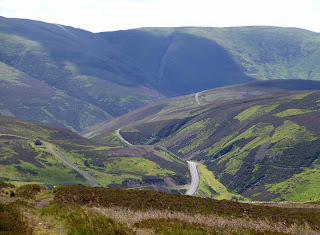 This is part of it looking towards Middle Moor and Threehope Height near the atmospheric and steeply winding trench of the Mennock Pass. We walked this two weeks ago now.Even for a family day out in summer these villages make a lovely and unique away day with a steam railway, an old mine to go down,a mineral museum and a heritage walk.Alex was still not up for a big day out so a walk  between the villages in bright sunshine was on the cards. 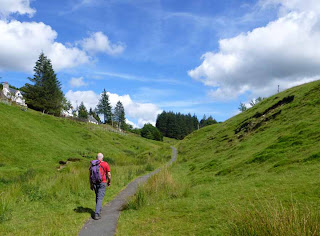 There is a scenic trail that runs from Leadhills where we parked ,travels through the village then takes a line from Laverock Hall  across the hills to Meadowfoot passing between Sowden Dod and Wanlock Dod.Alex being Alex of course he had to bag Wanlock Dod but didn't feel fit or confident enough to do Sowden Dod as well so early in the trip which he was gutted at. I swear even if that boy was being carried  in a full state funeral to the cemetery he wouldn't be happy unless his coffin went over the nearest Marilyn or Donald. 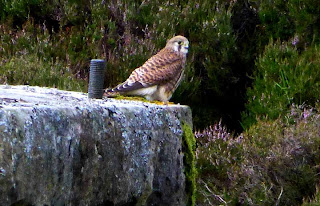 This is us approaching Meadowfoot.A kestrel had take up residence in the old mine workings here and a ten foot high stone tower doubled as its nesting cliff.Wanlockhead has an impressive preserved beam engine in the village which was used to pump water from the mines and would have been a very common sight all over Britain.The last time I was here years ago the museum,this heritage walk ,going down the mine and visiting the miners cottages made a great cheap day out with a very much , just show yourself around, home spun,kind of feel.This time I noticed a tour group were getting a full guided tour and the price had jumped accordingly with the guide holding the key to the locked miners cottages which were formally left open for visitors all day as far as I remember.That,s progress and the modern age I suppose.
Maybe that level of trust was also abused.It only takes one or two incidents to erode good will and freedom to show yourself around is usually the victim.
You can still stroll round both villages though on a network of trails for free and do your own thing visiting the many mining relics. 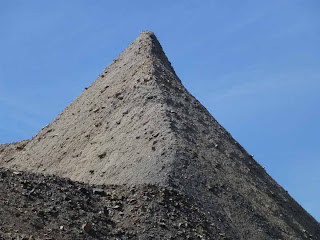 This is one of them.The man made Matterhorn of Wanlockhead.Not only lead but a range of other metals like gold, ,zinc ,and copper found its way to the surface from these mines.Life expectancy was somewhat low in those days as arsenic was common here too and took its toll not only on the miners who came into contact with it as a by-product of their work but on their womenfolk as well who unwittingly washed the families grubby clothes in the arsenic and lead laden streams.Ironically a local man is reputed to have lived to 137 years of age. 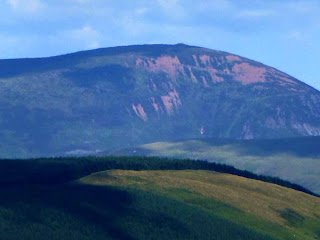 Nice view of Tinto from the summit of The Wanlockhead range of hills.Although we didn,t go into the museum Wanlockhead provided me at least with an unexpected bonus.The village had a second hand book sale on and I snaffled up four gems for a pound each.  Alex Garland,s The Beach. Alexander Mc Call Smith,s The number One Ladies Detective Agency. Joanne Harris's  Chocolat and Anne Rice,s  Queen of the Dammed.All familiar to me from film and television views but never the original printed source.A good haul for this lucky  modern miner.(of books.) 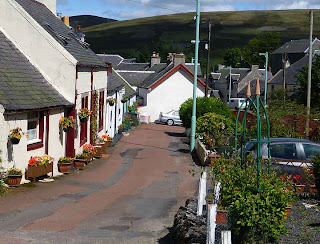 Although they must be fairly bleak,quiet, and remote in the winter time for the  permanant residents being over a thousand feet high and completely encircled  by the southern uplands(Some of the houses in both villages seem to be holiday homes or rented out as tourist accomodation) in the summer these high villages come alive with flowers and splashes of colour.http://www.visitlanarkshire.com/places/towns-and-villages/leadhills/
A nice and interesting walk to break Alex in again......And a great sunset come nightfall back at my own house a thousand feet below. 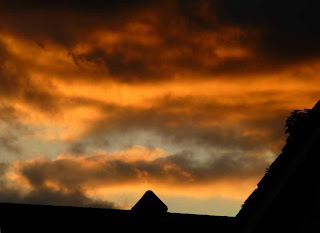 I,ve decided to start an additional little add on to the blog which will feature most weeks one of my favourite music videos which have inspired,,delighted or moved me over the years.Music is a very personal art form though and no two people will agree on what's good. I tend to like avant garde or visionary subject matter in my eye and ear candy as I like to think that I have an artisic bent. ( I always knew you were bent! Alex)Therefore the videos will usually provide a feast for the eyes as well just in case the music leaves you cold.
First up a stunning visual and aural portrait of the gap that has always existed between rich and poor since the dawn of time.
Dead can dance.The host of Seraphim.
If you want to imagine how hard  life must have been in these two mining villages in the past look no further than this.Better than most two hour films I,ve seen.I go to the four corners of the world ,sailing my computer like a magic carpet above the stars, just to bring you some of its treasures. 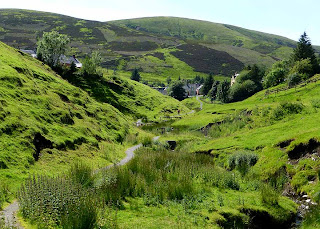 Great to see that Alex is out and about again. The Lowther Hills are good.....good walking, good views and lots of history.

Wondered where Alex had gone...hope he survived ok.

Remember visiting the cottage and the mine when the kids were young...I'm sure there's still a lump of ore we picked up in the loft. Never been back since although I kept meaning to have a wander through the area.

Interesting music choice Bob...remember to let me never get into a car with you! lol Very emotive stuff though. I'm afraid you'd be more likely to have your ears blasted off with the live Greenday album in "The Tank".

Hi Bob, that's a great area isn't it. It's years since I was in Wanlockhead.
Your video clip reminded me of the BBC's Human Planet in 2011 when they showed the people living off the KIBARANI rubbish dump in Kenya.
I remember seeing this on a smaller scale when I was in British Guiana (Guyana now) back in the 60's.
I wondered how widespread this was these days, so I searched on YouTube for "Life on the rubbish dump". Unbelievable !
The gap between rich and poor doesn't seem to be closing at all.

Hi Neil.
Yeah, its one of my favourite areas.I remember getting a tour inside the white golfball facility
on top as we had a guy with us who worked for the CAA.

Hello Ken.
Alex seems to be fine now.I,m into a wide range of music.Next week will be an up tempo number on the subject of 'Lust.' :o)

Hello Jim.
You fairly got around for work.I used to spend time as a child with a bunch of other kids looking through rubbish dumps near my home close to Barrhead.We found gas masks and huge green marbles left over from WW11 once and we used to fight with the gypsy kids who lived in the old army camp nearby who thought they had finders rights first. A lot of out of work fathers prowled through the dumps as well looking for free wood or metal to sell.It was very commom in our district when I was growing up so its not just third world.
Only 50 odd years ago.Big change in the world since then.

That's some slag-head, the Matterhorn of Wanlockhead! Is that the leadhill I always see when I'm driving down the A74 around the Leadhills area? That one stands out a mile.

Great pic of Tinto - I swear that's what I could see last weekend (before all that rain) from very North Cumbria, around the Solway Firth area.

Were you really close to that kestrel or do you just have a great zoom? It looks pretty tame.

I've read a lot of those No.1 Ladies Detective Agency books - they're great :-)

And finally... perhaps I'd best not put my taste in music at the end of my blog posts - I'm not sure too many people would enjoy the likes of Megadeth and Helloween ;-)
Carol.

Hi Carol.
Questions In order.
Alex is better now thanks.
Probably Coalburn bing from A74You,d actually need to be in Wanlockhead village to see this one as its surrounded by steep hills.
Might have been but most of the southern upland chain stands in its way looking from Cumbria.
Close and had a zoom.Not tame.
Reading 'Chocolat' at the moment.
Music is a very personal thing which is why I shall attempt most weeks to include an original,thought provoking, or entertaining video to look at as well.

A miner for books? Interesting to note that Europe's second oldest public subscription library (after Crieff!) was in Wanlockhead.

Was up (or is it down?) in the Lowthers on 26 Sep. Got off the bus in Elvanfoot and followed the ridge along to E Mt Lowther. In and out of the mist it was pretty atmospheric. I recalled coming up to the golf ball on the SUW. On the bus back from Leadhills to Lanark there was only one other passenger and he was only on board for a few minutes.

Cheers The 23.
Its still a surprisingly quiet area outside the summer tourist months.