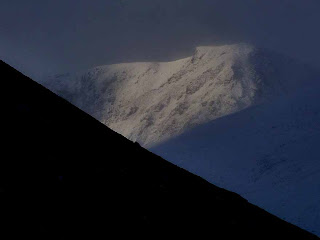 I thought I'd Post out of sequence here as this post looks more festive for Christmas. A few weeks ago now during the last dump of heavy snow and below freezing temperatures our club went up to Glen Clova on the eastern edge of the Cairngorms Near Kirriemuir ,the birth place of Peter Pan author J. M. Barrie. At first I wasn't too keen but then I was coaxed along.
Naturally The Cairngorms were plastered in snow. Leaving on Friday night we reached Kirriemuir a couple of hours later and set about finding a chip shop. 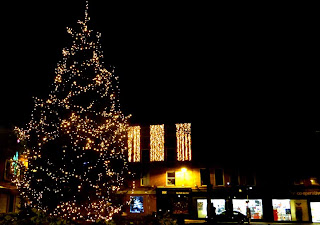 It was the first time I can remember being in Kirriemuir and for a small town it had a nice display of lights. Alex asked a guy staggering out a pub where the nearest chip shop was and he promptly and unsteadily led us to the door of a Chinese restaurant. A second inhabitant of this fair town pointed down a lane and this proved to be a better choice 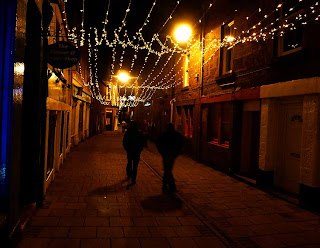 I had a tasty Baby Jesus in batter with fritters just because it was festive.(Like a mock chop only with fish finger arms and legs and a pickle for a head.) Amazing the wonderful meals you find out in the country. There's good eating in a baby Jesus. 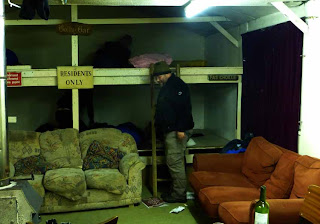 We were staying in the depths of Glen Clova in the Carn Dearg Hut. Quite a cosy wee place with a good wood burning stove in the middle of the room. We needed it too as the temperature was around minus -10 overnight. A poor wee expired mouse was found by someone and someone else had the nifty thought of placing it on Alex's hat to see how long it would take him to notice. He only clocked on when the tail started to slide down into his mouth but luckily he'd had his tea by then. 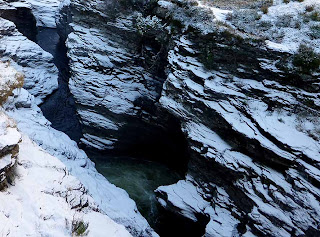 Next morning the club including John and Alex, both seen above along with Graeme drove round to the Linn Of Dee car park to do the usual collection of mountains baggers bag. As it was not that great a day up high with a bitter wind I opted for a low level alternative. It was freezing and cold on the heights so I walked into Bob Scott's Bothy thinking I could sit beside a roaring fire and have a chat with anyone inside. Nowadays my motto in winter is... go an interesting walk and take good photographs but stay as warm and comfortable as possible while doing it. Even in the snow try to make Scotland tropical! A fire to fire stroll sounded smashing and I was well motivated and keen for that.
Took this photo above from the spot where I jumped the Linn of Dee, again in winter, many years ago when I was still mad and reckless. Lord Byron nearly drowned here and the period climber Menlove Edwards swam down it. Don't try this at home children. 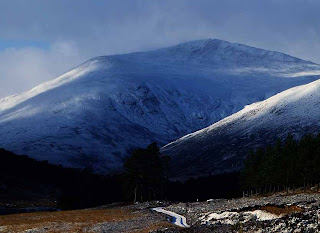 It's an easy land rover track into Bob Scott's and I was passed by several  mountain bikes with walkers doing the hills on them. We used to come in here a lot in the days when we were bagging Munro's and we had many good times in this bothy with various clubs. We usually met the WAHADS in here, a mad bunch of guys from Aberdeen. (Women and Hash and Drink Squad or so they said. I never saw any sign of women though despite them having top billing!)
This was their local bothy. 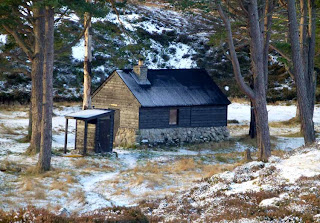 Just shows you what a small world climbing/walking still is. There was indeed a good fire going and a guy from Aberdeen in residence who knew said group and a few other guys I mentioned. Spent a cosy time in here until the short daylight hours meant it was time to head back before it got dark. 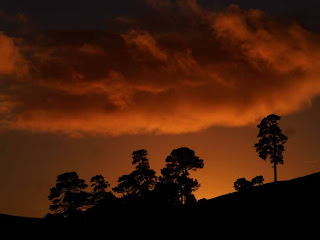 Walked back out with a nice sunset over the Caledonian forest and got back to the car in the dark.
I timed it perfectly to meet up with Alex and John at the car and we drove down the road, heater on full, to pick up Graeme who had started his hill from the Spittal of Glenshee area. 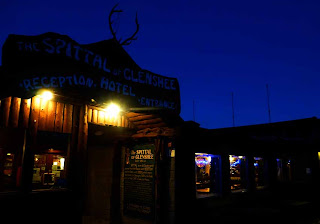 Then it was back to another cosy fire and more heat. A fine toasty day considering the time of year.
What! Hey, I'm just acclimatizing myself for my eventual destination. I.ve already booked a place down below as Heaven looks far too drafty and cold an environment for me to ever exist in. All that space and a howling wind from all those bloody angels flapping about everywhere. No Chance! Bring on the fiery furnace! Bags me the hot seat between Satan's slippers!

Music now. I've been a fan of this guy and his band for years, ever since the classic 'Our shadows will remain' and 'Redemption's Son' era. This is the new Velvet Underground right here. Totally under-rated singer songwriter with a huge back catalogue of great songs and acclaimed CD,s under his belt. New York Based as well, just like they were.
Posted by blueskyscotland at 01:55

Hi Bob, what a great way to spend a winters day! I have a soft spot for Glen Clova, it was where I was first introduced to the hills. I've stayed at the hut a few times many years ago. There's lots of good walks around there. Loch Brandy to Ben Tirran is an especial favourite, must go back there sometime when I'm fit again. All the best for 2013. Neil

Cheers Neil.
I'd like to go back to that area in Spring or Autumn as Both Glen Clova and Glen Esk look amazing places to walk. I was going to say summer then remembered what previous ones have been like.
Mind you the East Coast is always drier.
Merry Christmas and hope you get better soon.

Bit of a drive round to Linn O' Dee isn't it from Kirriemuir? Didn't you fancy something up Glen Clova?

I'm like you though and like to keep warm really so you sound to have had a great day. I haven't been into Bob Scott's yet as I'm usually just cycling to Derry Lodge, dumping my bike and then doing some Munros in the area but I fully intend to have at least one night there and do the Lairig Ghru when I've finished all this Munro-bagging nonsense!

Actually, this post reminds me - you guys are old bothiers aren't you? ;-) I mean, by that of course, bothiers who have been bothying for a while... Did you ever go to Corienalarig Bothy which was about 6 miles south of Braemar? (I'm gonna put the same question on Alex's blog too)

Your mention of the Spittal of Glenshee brought back memories of long ago Bob. While I was serving in H.M. Forces as a section leader in the Recce Platoon, I was given a task on a Monday morning. I was to take three men, travel by hitchhiking up to Aviemore and Glenshee, make arrangements for the platoon to get in some skiing and have my report back with the platoon commander on Friday morning. We were stationed at Norton Barracks, Worcester at the time. Well to cut a long story short,via the T.A hall Blairgowrie, two of the guys ended up at Aviemore, and me and the other guy at Glenshee. On Wednesday night I was at my mum's house in Fife writing my report while the other guys went home for a night in Manchester.
Friday morning I handed in all the arrangements we'd made. Wearing B.D's in the early sixties was a guarantee of a lift.
The skiing trip went ahead, the bummer was that I got my second stripe up and was kicked out of the platoon. It was probably the jaunt that got me my promotion. I never got a third stripe though, turned down for being "Too easy going with the men"

Hi Carol.
Wasn't that bad a drive round actually. Everyone I was with had bagged Glen Clova but still had Corbett's at the Linn.
I still like going up hills but they have to be dramatic for me nowadays as its the thought of good photos that drive me rather than the trig tick.
We used to do bothies a lot in every part of Scotland but I don't remember doing that one.
See you invited him for tea but not me. Quite right he's the good looking one :)

Hi Jim,
Glad to bring back memories.
When I had promotion at work thrust upon me I found it just meant I worked harder and had more responsibility for not a lot extra money. Guess I'm not committed or ambitious enough to enjoy the higher ranks of power.