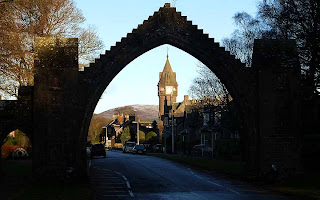 Sunday dawned at the Clova hut and again we set off with a carload of four to bag the hills.
Myself, Alex, John and Graeme. We were heading for Edzell and Glen Esk which is a lovely Angus glen surrounded by a fine range of hills. John wanted a shot at Mount Buttocks as that was new to him. (I think that's what he said but I wasn't really paying attention.). I didn't fancy any of that so when Alex suggested an alternative in the River North Esk Walk I jumped at the chance to get out at Edzell. 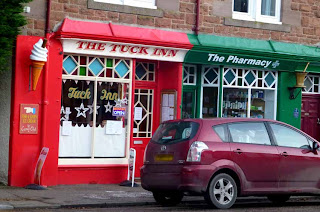 This is a lovely little town that you approach through an arch with some nice period shops and architecture on show. In the middle of the main street, between the Post Office and a garage is a signposted lane that leads down to the river. I was on foot but there is a large car park in town on the far side from the arch near the church which is easy to find. 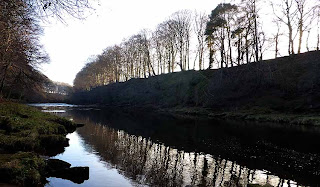 I'd never heard of this walk before but I've since learned its a classic of its kind. I wasn't expecting much but it started well and improved with each mile covered. I didn't even have a map of this area and was too mean to buy one for just a weekend visit but I thought there was little chance of me getting lost following a riverbank and this proved to be the case. Its well signposted throughout. 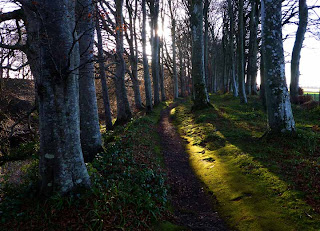 One big advantage of this walk is that it was warm, sheltered and sunny throughout. I didn't have a clue where I was going but just headed upstream along the left hand bank. Sometimes its better that way as everything you see comes as a complete surprise. I think the entire round trip was around six or seven miles but it took me about five hours as I was in no hurry and kept dropping down little paths and stairways to explore the river at low level. All along the North Esk these stairs drop down, some obviously carved in Victorian or Edwardian Times. Salmon beats are everywhere and they are all named. 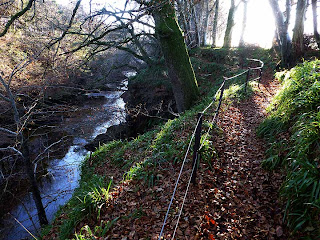 As I walked further upstream the river turned into a true gorge and became steeper and deeper. 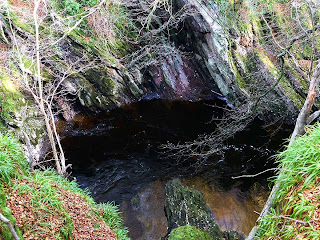 This is looking down from the path. 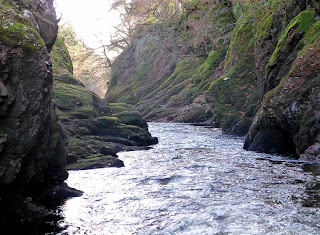 Further up at the first stone bridge it became very impressive and scenic. It was still below freezing but almost tee shirt time down here. Just the way I like it. 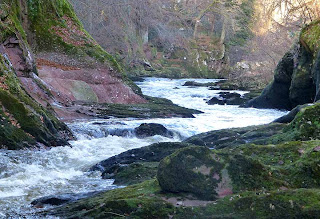 I was just thinking it was looking very like 'Deliverance' a classic film set in a deep gorge about a group of city folks in kayaks who come to a sticky end in North Georgia and was wondering how the guys were doing climbing Mount Buttocks when this happened... 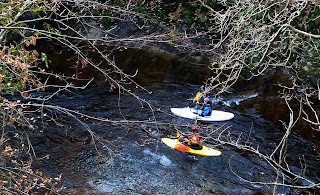 Spooky Eh? Its seemingly a popular river to kayak down as it has easy access and bail out points.
Some good rapids though and some nice easy sections. 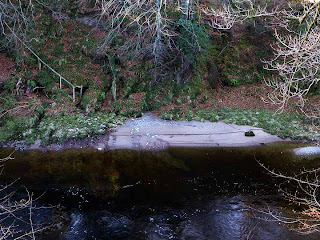 This is near the Coffin pool. Further up, near the Rocks Of Solitude, the gorge gets much deeper and higher at around 150 feet but I couldn't see an easy way down into that part so just stayed on the path above the ravine. 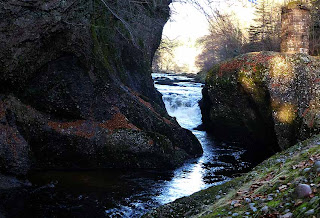 This is a lower section which has the remains of an old fishing bridge across it suggesting that this estate was a much bigger draw for the salmon season in the past like most of the grand sporting estates.
On the way back I returned along the other bank of the River which also has a path though it is slightly wilder and harder to negotiate in places, coming back to Edzell via the green suspension bridge. A great low level river walk with plenty to see. Well worth it if anyone is in the area.
Thanks to Alex for suggesting it.
A real treat this week seeing as its Christmas. A stunning video and song. My angel Gabriel by Lamb. The video is The Lovely Bones, a great film by Peter Jackson about a very dark subject indeed but which has some truly stunning images of a child's idea of Heaven in it. ( I was only joking about the Baby Jesus supper obviously in the last post before anyone rushes off to Kirriemuir to buy one. Maybe I should Patent that idea though. It might be a good seller!
Merry Christmas everyone. Best wishes to you all for 2013.

That looks a really nice river walk - I've driven through Glen Esk but not really done any more than that - I'm sure I'd like it though as I love the eastern glens around that area.

That was a great weekend you had Bob, you guys must be ultra fit. Your gluteus maximuses must be as firm as Mount Battock.

I always though Barrie was a Doonhamer since they make such a fuss of him ower there. I see though he never got there till he was fourteen.

'The Lovely Bones' was one of those films that if you started to watch it, you had to see it through to the end. Brilliant film.

Hi Carol, Merry Christmas.
Its a good walk and you would really like Hart Hill at the top of Glen Esk. Wild, rugged and impressive.
I've not done enough in that area either.

Hi Jim. Merry Christmas.
One of my favourite films. Very hard to get the balance right with such a grim subject but he managed it.
Hope The Hobbit is as good.

Merry Christmas! I don't often comment but I do enjoy reading about your walks.

Cheers Lesley.
Its nice to get comments just so you know someone's reading it out there.
I can only think it was the cheery Christmas video I posted about a serial killer of children that got you typing :) Either that or you like river walks in Angus.
Thank you anyway. Much appreciated.

Hi Bob, that looks like a fine walk. I love to walk by a river, so much to see. Even a walk along the canal at Kirkie can be good, I have spotted a kingfisher on a couple of occasions. But nothing can beat a fast flowing highland river, especially when it is in spate. The stretch that takes in the Reekie Linn near Alyth is also worthwhile doing if you have an hour to spare.

Cheers Neil.
Yeah.If its a dull or misty quiet day a gorge or river exploration can be more exciting than going up a hill as at least you can see what's around you.