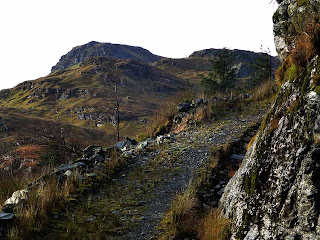 This is one from a few weeks ago just before the first winter snows arrived. Two car loads of walkers arrived in Lochgoilhead which is a small village just over the rest and be thankful from Arrochar. Its a place I really like but the hills are tough going around here and these three made an exhausting day.
The well made track above was the only one we managed to find and we were only on it for a short distance 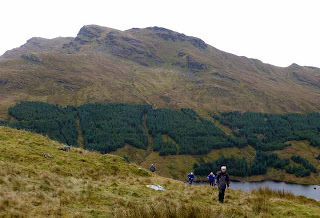 A sizable group outing this time. It was our friend Graeme's suggestion and he picked up Alex, Alan and David. Despite being a small village we managed to park in separate places so missed each other starting off. Both parties went up different ways, Myself and Ron going up via the old Lettermay Burn path which was now overgrown, boggy and  tough. As we met up at the same time however, just above in the first photo, the route they picked, which was the new official one didn't appear much better. Yet another new long distance path cuts across here. The Cowal Way is a 57 mile walk from Portavadie on Loch Fyne to Inveruglas on Loch Lomondside and travels through some wild, rugged and lesser known scenery. Its probably an area that gets less visitors than most of the highlands as it still lies under many walkers radar as a place to go.
http://www.aboutargyll.co.uk/en/holiday-programme/self-guided-walking/cowal-way.html Although dry there was a large amount of water already on the hills and boots were soon sinking up to ankle depth with every step away from the path. The journey across these hills is completely trackless. a rare event nowadays. 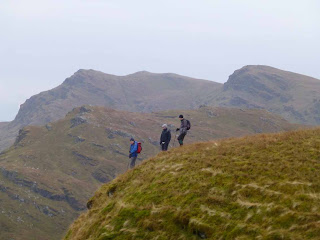 Steep little mountains and very rugged throughout. This whole area could give the rough bounds of Knoydart a run for their money. Just across from here lies Argyll's Bowling Green ,a sarcastic term for the Loch Goil/Loch Long peninsula which is equally rugged underfoot.
Dogs have been lost in this area falling down fissures and there were plenty scattered around the vicinity. Deep pits that is not dogs. 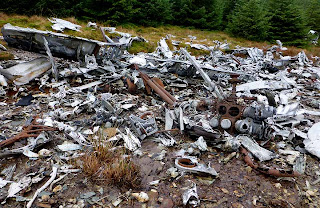 Halfway across these triple summits we came across the plane wreckage of an American Super fortress which crashed here in 1949 killing everyone aboard. Twenty crew members lost.You can still see the intact tail gun section and it covers a sizable area on the edge of a conifer forest. Apart from a small memorial it lies untouched as this area is remote. 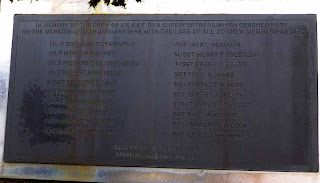 This looked like it might be part of an original Pepsi bottle which had been placed on the cairn. A poignant touch which made an instant connection somehow turning a long ago event into sharp focus. Its always the little everyday things that make it real. 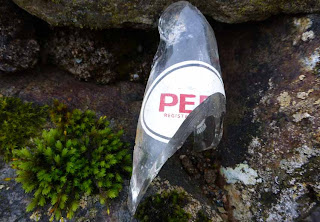 From here we continued on to the last hill then cut down a steep ridge before counouring back round towards Lettermay. 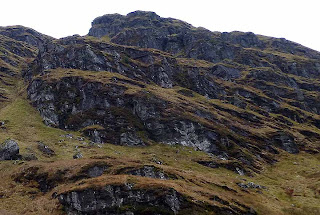 It was so steep and fractured here I got separated from everyone else as I descended a gully into a cliff selection box which pushed me further and further away from the direction I wanted to go.
It was slimy, tussock filled slopes pouring with mud and water but I eventually made my way to the bottom then caught up the others near the road. 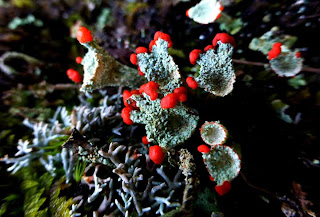 A tiny island of dry rock in a sea of bog can provide a haven for a micro world of colour however.
This was the size of a couple of thumbnails. 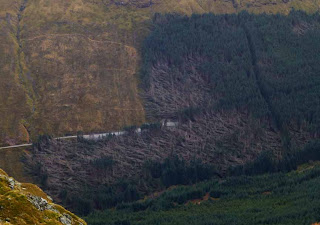 Part of the forest destroyed by winter storms. 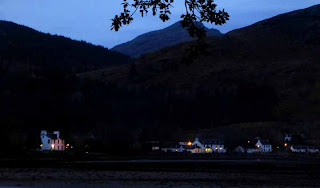 We reached the road just as the light was fading and walked back to the car in the village.
Everyone agreed it had been a great but tough day out. We enjoyed it once back in the house, dry and warm after a hot shower. No rain but soaking wet from the knees down most of the time as soon as we left the car. It was this trip that made me invest in decent winter boots. 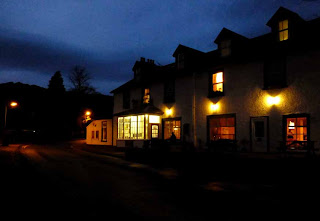 The Sensational Alex Harvey Band at the Ragnarock festival. A brilliant band way ahead of their time who blended Alex's love of comic book characters and a real air of menace to create something unique. As usual KISS went on to make all the money but it started here. They were very big in Cleveland in the United States and headlined that city several times. The Scandinavians here don't seem to know what to make of them but they were a very influential and popular band in the 1970's.

So is Alex Harvey Alex of the blog in his younger days? ;-)

I've only ever seen one video of the Alex Harvey Band before and that was on The Old Grey Whistle Test - they're certainly something to watch!

That sounds a very hard day out!

I went to see them several times in the 1970,s. Fantastic band live at their peak.
It was probably N.E.X.T on whistle test Carol as I watched that one myself.
Alex Harvey came back from playing in Germany many years ago and a young girl heard him sing a new song he'd picked up on his travels. She asked if she could sing it in her act and he said yes.
That was Lulu and the song was Shout.
Shows you what a generous guy he was.
The other example of someone giving away a number one song was David Bowie giving All The Young Dudes To Mott the Hoople because he didn't want them to split up. They really made it their own though. Great song.
Oh and Prince several times to female singers he fancied. Sinead, Sheena Easton etc.
Can you think of any more like that :)

I haven't done much in that area. These hills look really rough and hard going. I think that I'd be doing them individually rather than as a group!

Prince had a great idea there ;-) No, I can't think of any more - I knew about the David Bowie/Mott The Hoople thing but didn't know why he'd given them it. In a video I've taken off YouTube of Mott the Hoople, they have Bowie's ex-guitarist, the late and great Mick Ronson - I didn't know he'd joined them later.

Hi Neil.
The hardest part was finding the best way onto the hills in the first place. The walk across them wasn't too bad but really boggy underfoot with so much rain.
Your comment had to be rescued from the spam folder. I took off the word filter to make it easier for folk to comment and just got loads of junk comments and trash instead in just two days. I'll not be doing that again as the filter when left open just puts everything into the spam folder, good and bad.
This word verification is becoming a ******** joke though as even with a magnifying glass the numbers are tiny.

Hi Carol.
They were both friends of Ian Hunter. After Bowie went solo Mick Ronson joined him to form the Hunter/Ronson band for a while.
The Beatles also gave a few songs away. Mary Hopkins springs to mind.
Rolling Stones and Marianne Faithful. I'm sure there's more. Don't know how many were number 1's though. I seem to recall Bowie gave Lulu 'Man who sold the world' as well.
Even if you don't get what you really really want in return you might just get what you need :)Ie more money if its a big hit.

That's a great macro shot Bob, love it.
A few of my favorite songs were written by established stars.
"As tears go by" by Marianne Faithful was a Richards/Jagger composition.

"Stupid Cupid" by Connie Francis was a Neil Sedaka composition.
The Buddy Holly classic "It doesn't matter any more" was written by Paul Anka.
And of course I have to mention Carole King who I suppose is considered more of a songwriter than a singer(but I loved her singing too)and Aretha Franklin with "A Natural Woman"
Back in the 70's I remember watching an amazing version of Delilah by Alex Harvey on the Old Grey Whistle Test, he was the real deal.

Yeah that's another bunch right there Jim. The Stones gave a few cracking songs over to her.I think Paul Anka wrote the lyrics to My Way for Frank Sinatra though the melody was older. French I think. Bowie had a go at putting lyrics to it very early in his musical life but lost interest.
How's that for two degrees of separation never mind six.
From memory a lot of 50s,60s songwriters wrote songs to order together in the tall Brill building, Neil, Carole and Leonard Cohen to name but a few. Tower of Song by Cohen is a great description about that era when they had to give some of their songs away to other singers to earn money.

Me again, correcting my dodgy own memory. Bowie was hired to write lyrics first, song had different French lyrics, but it was given to Paul Anka instead. He then came up with 'Life on mars' cos he was pissed off at getting messed about.
Paul McCartney only produced Mary Hopkin's single and signed her to Apple records. 'Those were the days' had been a Russian song before being released in Britain.

There's a bit of a co-incidence Bob, just been watching a T.V documentary called 'The British Army of the Rhine' and 'Those were the days' in German was played a couple of times in the soundtrack.

It was a very memorable song Jim. You don't hear it much now though.
I'll self correct another snippet. Not sure if Leonard Cohen actually worked in the Brill building in New York though he was familiar with the whole tin pan alley scene when they were churning out popular hits of the day.
Even though only a handful of people read this I like to get facts right if I can:0)