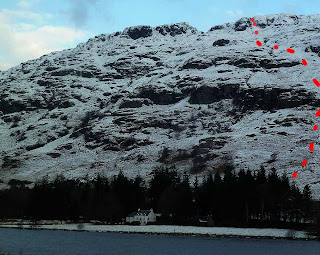 If any mountain can be called Rob Roy Macgregor's mountain it is this one, Meall Mor 747 metres, as it sits directly above the head of Loch Katrine and the site of the stone cottage he was born in. The house seen in the photograph above was built slightly later and dates from 1707. Rob Roy was born in 1671.Died 1734.
A good history of the house, modern dodgy dealings surrounding it, and the Clan Gregor connected to it is contained in here.http://www.glendiscovery.com/glengyle-house. Click on Glengyle House htm, to see it.
The photograph above is the route we took following a faint path around the back of the buildings starting near the old graveyard. By the look of it this mountain does not get many ascents. I know from previous outings with Alex on the hills surrounding Loch Katrine that these hills give tough walking and this one was no exception. 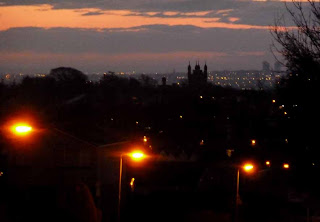 A dawn start was called for and we met up just in time for sunrise above Glasgow. Walkers today were Myself, Alex, Graeme, Alan and Sandra. 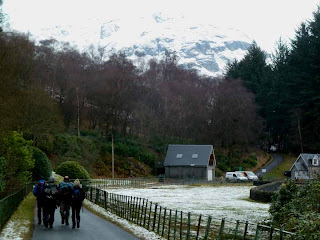 We parked at Stronachlachar which only really exists nowadays as a community due to the water board maintenance for Loch Katrine which supplies Glasgow with its drinking water ,as a summer tourist destination for the famous loch steamer, The Sir Walter Scott, which departs from the far end and visits here, and the holiday accommodation on the estate in this beautiful location. On a bitter winters day like this one though people were few and far between. The forecast was for 30 mile an hour winds on the summits and day time temperatures a few degrees below freezing. 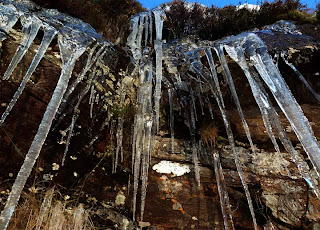 Plenty of ice around even on the walk along the private water board road to the head of Glen Gyle itself. Once on the hill we picked a line through ankle deep snow into knee deep snow, occasionally falling into water filled holes as the surface ground layer under the snow was still saturated from heavy rainfalls during previous months. Not a good combination for all those little creatures that depend on surviving the winter months insulated under the snow, building a network of tunnels through the grass. Voles, mice, shrews etc... 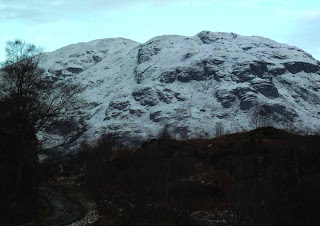 This is us getting nearer our mountain. The rocky shoulder of Meall Na Boineide above seen from the water board road. Meall Mor was Graeme's choice of hill and a good adventurous one it was. Would not have thought of it myself even though I've cycled along here in summer. 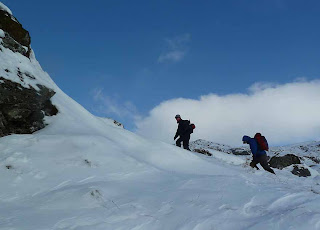 Halfway up the hill in the deeper snow. 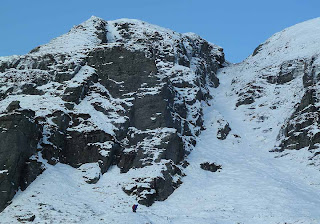 Alex being Alex he decided on a spot of gully climbing. This is him nearing his gully of choice as this hill is ringed with impressive crags although there are easier ways to the summit.
The snow was soft and slippery underfoot and the wind chill factor was below minus twenty. As soon as you removed a glove to take a photograph your hands grew numb and even with double insulated gloves and full face balaclavas on it was unpleasant. Hands had to be brought back to life occasionally by removing gloves and placing them under clothing next to bare warm skin to keep the blood circulating round the fingers. 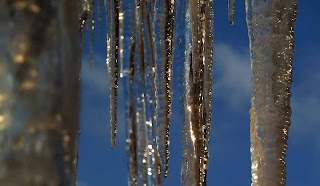 The view inside a small ice cave on the way up the mountain. 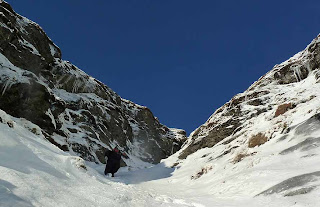 Alan nearing the top of the gully. Didn't need crampons which was lucky as putting them on would have been murder on already frozen fingers. 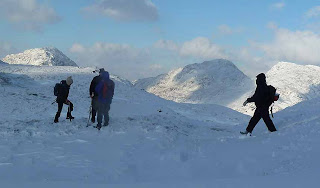 Great views from the summit. On a nice windless day we might have walked along the ridge over Stob  An Duibhe  and An Garadh but given the conditions, High spindrift and bone numbing wind speeds, we wanted  back off  by the shortest route. No wonder the Vikings just laughed when the early missionary's said they would burn in hell if they remained heathens. The warmth of a wall of flame held no dread for them, only salvation. 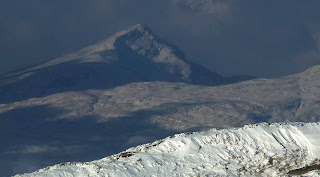 Views northwards were impressive though. 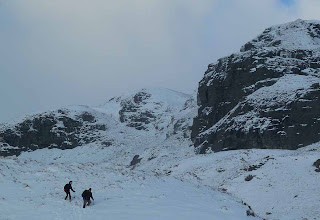 This is Graeme and Sandra descending.
A great day out but easily the coldest day on the hills I've had for several years. Even the walk back to the car along the low level water board road  with a strong headwind blowing off the loch was full face balaclava time with jacket hood up and freezing, watering eyeballs.

Video is Catherine Destivelle in a classic from Mali. Its nine minutes long but a real gem with local cultural interest throughout as she solos a vertical cliff with a trumpet playing witch doctor blasting jazz at her as she hangs off overhangs.
I remember seeing this  many years ago as she's a real legend in climbing circles. In her early 50s now. Also the first women to solo the north face of the Eiger in winter taking 15 hours. Makes our day out seem rather tame :0)

Looks awfully cold Bob.
You seem to be assembling a small elite group for walks nowadays, you'll soon have a bevy of young fit lassies following you up them thar hills.
I toured the Trossachs a few years ago by car, fabulous area and I've a picture of me at Rob Roy's grave.

Catherine Destivelle is amazing. I remember watching Paula Hamilton interview her and I was smitten.
She's a helluva woman.

This is one that I still have to do Bob. Fortunately (!) I won't be fit enough to do it until the better weather is here. It's useful to have your description of the route; are there any fences that would stop Ben getting up?

Hi Jim.
Twas freezing. Bevy of beauties Pah? They would only be a distraction from the beauty of the natural world.Personally I cant stand supermodels pawing me when I'm engrossed in watching Africa with Sir David.
I was actually looking for a great snowboarding clip down a mountain but couldn't find any without stupid chatter...Like... Hey dude! Ride that Mother! Show that mountain no fear vibes!

Hi Neil.
I'm afraid there is. We went that way to get a gap in a high deer fence with no way of getting over it(No steps)that we could see. We did have to jump a waist high fence by vaulting it just past the trees. Then we could skirt the deer fence along the side of a stream.You may have to pick a different way up further along. The rest of the route is easy.

My God - that woman's nuts! And how on earth does she have the strength to do all that hand traversing on those overhangs? I can do about two moves and then I invariably fall off as my arms give up! And as for the no rope - :-o

As to the walk report - that was pretty fearsome and 'orrid-looking - no, I don't mean you guys, I mean that hill. I think I'd find that awkward in summer.
Carol.

Hello Carol.
Even more impressive as I think this might have been climbed a few years after she broke her back and pelvis falling down a crevasse. Different level of nerve and sheer determination to the rest of us. She's a motivational speaker nowadays :) You'd manage it in summer no problem. Its just a walk.
Meall Mor that is.