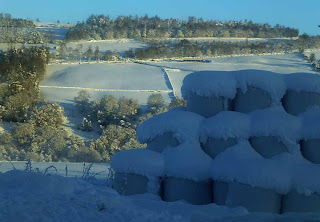 Took a trip up to Glen Shee with the intention of doing An Socach, an isolated whale backed Munro  west of the A93 on the sheet 43 Braemar map. As this was a major trek for a day trip we filled two cars. I travelled up with Grant and Doris, Graeme took Sandra and Sean.
Watching the weather forecast the night before there had been heavy dumps of recent snow so it was doubtful if we would manage such an out of the way hill under these conditions. 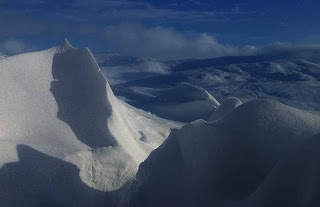 The snow had drifted into head high drifts in places and the snowploughs  were still clearing the road into the ski resort when we arrived. We had timed it perfectly as we only had to wait 20 minutes before they had scooped out the car parks ready for traffic. Most of the other high pass roads on the east remained closed but with 1000 plus cars full of skiers waiting to spend big bucks for day tickets there was a major incentive to open this one. 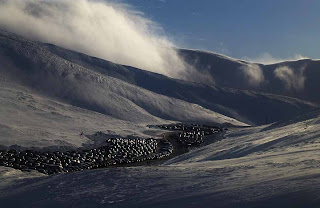 Perfect conditions and all the four wheel drive skiers cars had helped carve a safe path down to the tarmac which was covered over in places. We followed behind a family sized Porche, not the type of convoy or situation I'm used to but fun for a photographer. 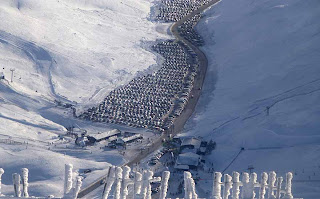 From the hill the car parks looked like man made glaciers sliding down the glen. Perfect skiing conditions. The Cairnwell and Carn Aosda pair of Munros  made a fine day out as given the conditions it would have been a struggle to get up most other Munro's that day. 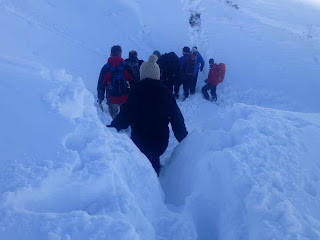 In places, in the drifts, it was waist deep. Luckily we tagged onto the back of another group walking up to dig snow holes. 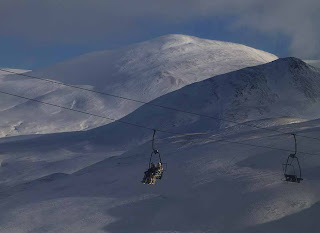 Some folk took the easier but more expensive option.
The last time, over twenty years ago, I did this pair ( the mountains folks, the mountains, not the chair lift occupants) it looked like a Lowry painting as well. Loads of brightly coloured little figures having fun on the slopes. 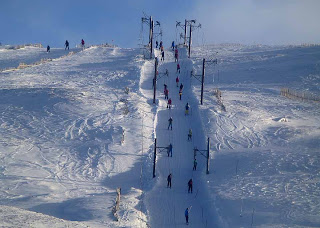 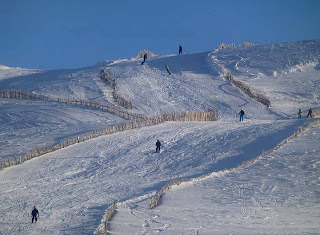 And coming down... More snowboarders than skiers, some as young as six years old by the looks of them yet still proficient skiers, able to bunny hop with the best of them. 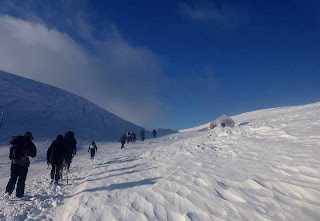 We did it the hard way but were rewarded with fantastic views. Grant and Doris had snow shoes which I've never used in Scotland but they definitely helped that day. 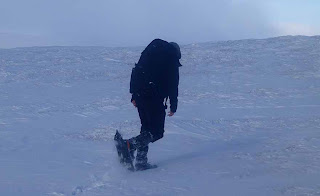 We were sinking knee deep over the same ground. 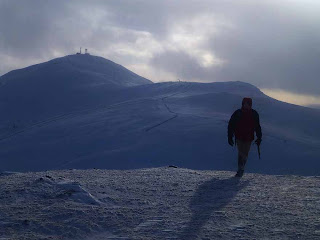 One of Sean on Carn Aosda looking across to the Cairnwell. Very atmospheric conditions up here on both these mountains. Light winds and a high artic plateau feel. The metal towers on the Cairnwell had over a foot of frost and snow covering them from top to bottom. Ice Station Zebra look. 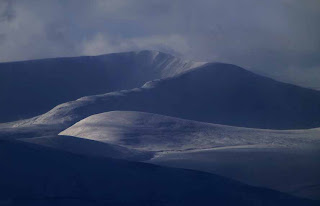 A distant view of Beinn Iutharn Mhor, the highest mountain in the Mounth between Beinn a' Ghlo and Glas Maol. Away from the ski resort the hills were empty, even cross country skiers sticking to more familiar, closer, terrain until the soft snow compacted further. Avalanche risk would be very high on the steeper slopes, heavy snow lying on unfrozen, sodden ground. 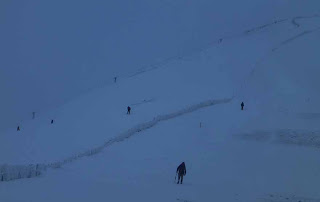 The hard plod up to the Cairnwell followed then a fast decent down the front run beside the ski tow to reach the car. No one was on it as that lift was still shut.A tough but highly enjoyable day out in a fantastic area.

Keeping to the snowy theme here's a short video of a  very lucky guy climbing an ice route. In spite of the fact he's facing a fall he stays remarkably calm and composed throughout.  Never loses his smile at any point! Worth watching all the way through.

Having previously lived at Bridge of Cally, it's good to see that Glenshee is having a good year right now. Nice article, and i loved the pictures.

Hi P.
Yeah its not too bad this year on the east coast for snow. A few good weekends at a thousand cars a day brings in the money.

Brilliant posting Bob. I'm amazed at the amount of cars in the car park there, it was empty the last time I came past it. Got to be good overall for Scotland when we get the snow.
Since you've alluded to them maybe you should tell us more about about the chair lift occupants.
Great set of pictures.
The guy in the video couldn't have timed getting that rope on any better, could he?
You mentioning snowboarding brought back to mind a great youtube video I watched last year called "Shoulders of Giants // a Scottish ski and snowboard film", there's some hardy folk out there.

That vid... ice climbing up a running waterfall is not the smartest thing that guy's ever done!

Hi Jim.
Don't know anything about the Chair lift occupants. Just thought I'd stick a joke in to brighten up an otherwise straightforward post.
Surprising how calm the ice fall guy stayed in a tricky situation.
Will watch that video if its still posted.

Yeah. I'm not a big fan of ice climbing. Too many things that can go wrong if conditions change. By the sound of it he left it too late in the day and it started to melt.

That ice-climbing video is one of the scariest things I've ever seen! My eyes were bulging like one of those little emoticons you see! That rope was just in time wasn't it! But it was clearly melting and I can't imagine why he was on that route - he must have set off far too late. I can't imagine how someone was there to help him just moments before he needed it - how lucky can you get!

I can't believe how many cars are in that carpark either! How do they unpark them all? Most of the earlier ones are completely boxed in aren't they? You're right about it looking like a man-made glacier though - I suppose nearly all the cars would be the ubiquitous silver so it would look even more like a glacier.

Hi Carol.
Alex ,font of all knowledge in climbing matters, thinks it might have been filmed in an outdoor climbing park in Colorado he's read about where a large pipe filled with holes runs along the side of a steep mountain. Water pours out of these down the various gullies creating purpose made ice climbs in a natural outdoor setting.
Sounds incredible even for America but he's usually right about these things. That would explain why the other couple were above him as a path along the top of the routes means that you could climb several, one after another throughout the day.
Although slightly artificial the risks and fall factor down the gullies remains the same.
Only in America!

That would explain why the other group were handily just above him yeah. I'm sure Alex is right.

By the way, where's that second photo on your post? It doesn't look local to what I remember in the Cairnwell area...
Carol.

Hi Carol.
2nd photo was taken beside the red hut in the 9th photo where the snow had formed large wind sculpted drifts next to one of the outer walls.
Deepest snow drifts I've seen for a long time.

Ah gotcha - it was a scale issue I was having! I was wondering why there was something Eiger-esque in the Cairnwell area! LOL