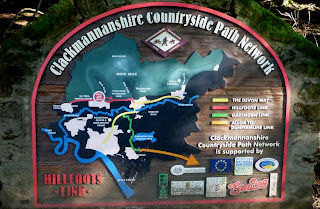 The great southern wall of the Ochil escarpment drops steeply towards the wide plain of the Forth. Several villages and small towns sit at the foot of this great wall of rock and steep rising grass making this an enjoyable outing for photography. I've been here many times but on this occasion I decided to think out the box, concentrating not only on the obvious views but also on the little, mostly ignored, creatures underfoot as they too provide much wonder and interest when they are not getting stepped on. 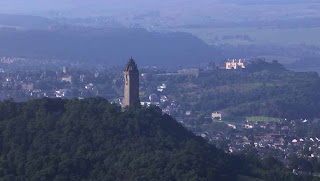 This is an end to end tour taking in three different trips over the summer months exploring the deep glens and high ridges along the escarpment edge many of you will know well if you live in the central belt of Scotland but hopefully a few new sights too. 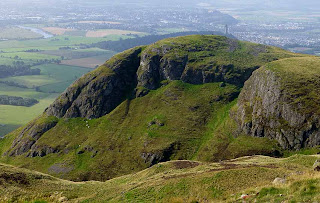 Both these views are from Dumyat, the lowest of the central chain but also the hill with the most dramatic south facing cliffs. 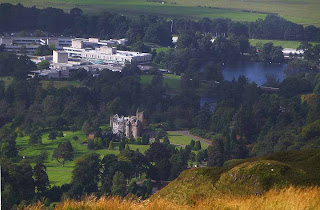 Another view from Dumyat looking down on Stirling University campus. Pine martins have been reported here recently. The university grounds make a great walk. I've got a collection of photos taken on this campus ready for posting somewhere but  I've not got around to them yet. 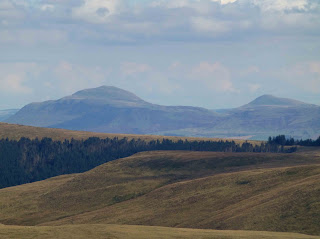 The Lomond hills seen from the Skythorn area in hazy sunshine. 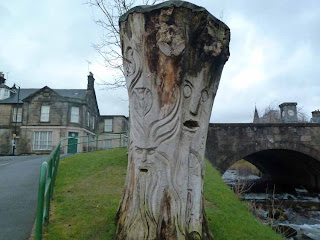 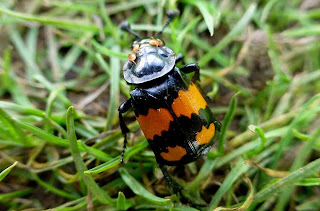 A sexton beetle. These are unusual beetles as they can smell a corpse from several miles distant and home in to find it. They then lay their young beside the corpse, usually a small bird or mammal which they also cloak with an anti bacterial agent to stop decay after burying it underground. Unless these are unrelated parasites this one appears to have several young sitting on its head. Never seen that before. A whole range of them here in this link below. I think this one here is a Nicrophorus Investigator which is a great name for a corpse finder.
http://en.wikipedia.org/wiki/Burying_beetle 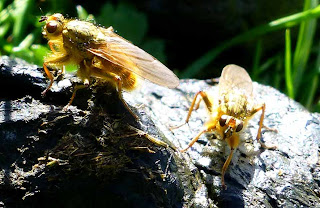 Due to the highland cattle up on the Ochils  I soon came across these little guys also making a living out of decay and animal waste. Dung flies. Most people don't bother with them or think them dirty or a pest but they are fascinating in their own way and fight really hard to keep their hard won lump of dung, seeing off anything else that would steal it, including me. 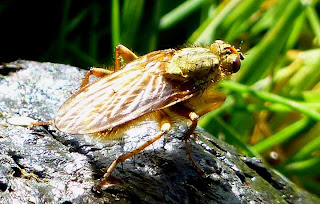 They calmed down once they knew I wasn't a threat sitting beside them and allowed me to capture them at close quarters. 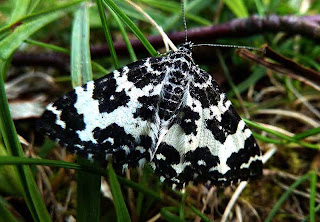 I suppose the majority of folk would be drawn more to this. An argent and sable moth.Very pretty. 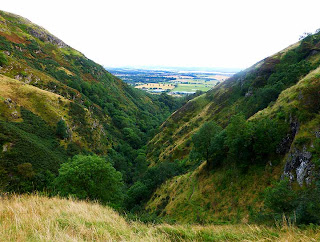 One of the great delights of the Ochils is the deep, tree filled glens that dissect the steep escarpment wall before climbing out onto bare upper heights of smooth golden grasslands. The Ochils are unique in Scotland but even here there are signs of erosion on all the footpaths caused by high summer rainfall then people  inevitably waking on them. 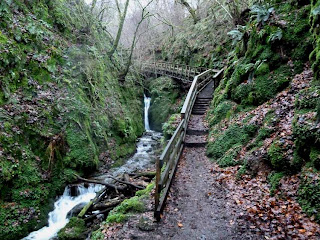 Good for the waterfalls I suppose but anyone with eyes going around the countryside this summer cant help notice the sheer number of topped trees everywhere caused by landslips, all the dead animals that didn't make it,caught out by months of rain and the damage to every footpath Scotland wide. Our world is changing rapidly and I cant help thinking outdoor blogs like these will soon be just a curious photographic time capsule of the way things used to look. I hope I'm proved wrong but I can honestly see a future where the wonderful deep shady glens of the Ochils are mostly bare of trees if the increasing trend for landslips and wet cold summers continues at its present rate of acceleration.
Do people know when they live through a golden age or when it comes to an end?
The good news for future generations is that they will probably not miss it when its gone as they will have an entire virtual graphene bendy friendly kaleidoscopic world to live in instead. I wonder what Kim Kardashian is having for breakfast today? I love bendy twitter. Touring my local computer retailer I'm comforted to see its the really important things that matter most on modern Windows Eight displays. As a great modern philosopher once said...Be careful what you wish for cos you just might get it.(Pussycat Dolls I think it were?)
Me? I'm  unchangeably old fashioned  in my tastes so I still prefer the high street version of nature in the raw for now. Like watching a long line of dominos falling isn't it Mary? Ah well, you tried your best. Maybe we could turn them all into cut rate licenced sex,drug and party zones instead. That might work. One way to pull money from punters pockets even during a recession. I cant see the supermarkets putting that on the shelf's just yet but you never know.
Or maybe I'll  raise a whole  new society of Sexton beetles when my corpse topples over on a remote hillside someday. As I've discovered there's a hidden world of wonder in corpses and crap if you go looking for it. Now that's a happy thought to end with. Kim, eat your heart out! Lets hear it for international burying beetles. A real growth industry.

Todays video is a cracking live action extravaganza of Starlings going through their nightly winter display. Once a common sight in towns and cities throughout Britain. I used to watch these displays at the bottom of my local hill growing up but didn't see as fine an example as this.

As to the erosion, our moor has been so wet this year, I've refused to go up there and despoil the paths any further until they dry out (which they haven't until they froze this week). It hasn't stopped the rest of the village traipsing up there most days though - the path up our 'crag' can now be seen from miles away :-(

I too have been very worried about all the landslides and floods this year. Sure, we've had all that kind of thing before but, this year, it's been more or less every week! I haven't known of the East and West Coast mainlines (and other important railway lines) being closed before though. Very alarming. But I still think most people haven't noticed - or they're being ostriches and ignoring it all with their heads stuck firmly in the sand and their big bums in the air!

On to a cheerier note anyway - that Dumyat looks a bit of a monster - is there an easy way up it?
Carol.

Ah! It becomes clear. No. I do not feel the need to smash up textile machines Carol. Where would I even find one?
Yeah there has been a lot of erosion everywhere. I notice it even in the local parks.
Dumyat is a great wee mountain but an easy path leaves from Blairlogie car park, a former Victorian goat spa village, and climbs to the summit without any problems. For the adventure minded however, once above the gorge, you can go right halfway up then weave a line through the front face cliffs with only mild scrambling involved. A great way up I've done many times.

Very interesting and diverse post Bob. I love the name of that beetle.
Your comments about erosion made me think we should maybe have a strong land management board who'd have the power to close off areas to allow regrowth. I know from talking to a forestry man that there are grants for regeneration. Maybe that's part of the answer.

Talking of rain, when the Cree flooded recently I'd heard of at least twenty sheep being swept away. After doing a search for similar incidents i came across this.
Storm Damage in Galloway
Newton Stewart have now set up a flood watch group since Dumfries and Galloway Council consider the flooding a one in 75 year event, and therefore will not spend money on flood defenses !
P.S My first ever encounter of fell runners was a visit to Dollar Highland Games in 1956 as a 13yo.

Thanks Bob - that more-exciting route up Dumyat sounds familiar - did you write it up once? Or did I see it on my ex(unmentionable) forum I wonder? Your description of it definitely rings a bell anyway...

Hi Carol.
Don't think it was me after a brief glance though all my back issues.(sigh!)Good route though. not hard, as you can avoid scrambling altogether but very dramatic.

Hmmm - I'm not great with dramatic - I'm fine with scrambling but it's exposure (or drama) that gets to me. I'll certainly give that route a go first though when I get round to that area...