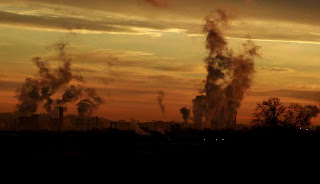 Left Glasgow in darkness on a cold but wind free day heading for Pentland hills and motored past Grangemouth just in time for sunrise over gas flares and towers..
Never seen it look so beautiful. Mind you I always think it looks stunning :) 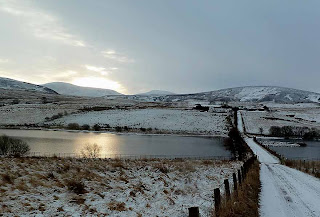 Just myself and Ron today. Alan was going to come too but he was busy. Alex wasn't interested as he'd already bagged these hills. Set off from that car park below Easter Bavelaw, seen here, heading for Scald Law, which at 579 metres is the highest peak in  Pentlands. 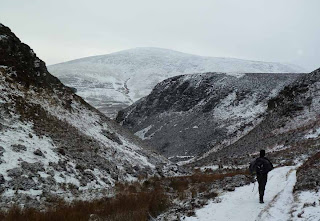 Ron going through the gorge near The Howe. A bitter day well below freezing and full thermals on for these hills. Not much wind-chill though thankfully. 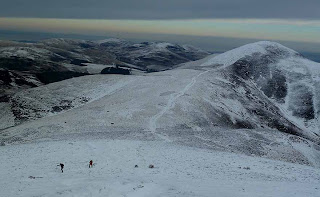 Not many folk on the hill today but we did meet a couple of enterprising young females who were doing the full circular round of ten (I think that's right) peaks in a 21 kilometre day starting off from near Hillend ski centre. They were in training for a big charity event up a well known African mountain and this round would certainly get them fit. I was glad we were only doing three peaks ourselves though as that was just nice for the short winter days. 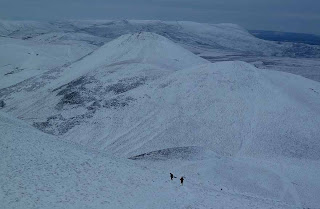 Near the top of Scald Law. Great views over the whole range,then across to the Moorfoots, the Broughton heights and the Lomonds. As soon as nearby Edinburgh fades from sight here it feels really remote and isolated, especially in winter. 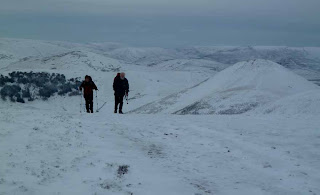 View looking towards the Western Pentlands where some of my favourite, quieter hills, lie. 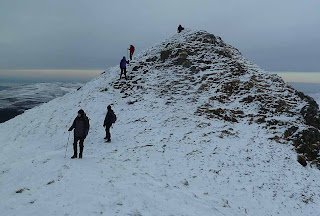 Passing over the summits of East Kip and West Kip with their modest rocky arêtes. 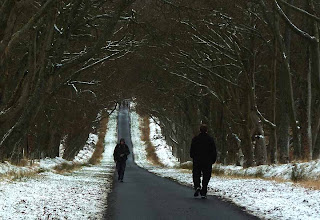 Heading down the  tree lined avenue at Bavelaw back to the car. A smashing day and a new set of hills for Ron. 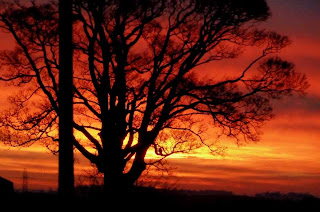 Usual winter sunset to end with near Glasgow. The two girls we'd met on the hills might still be walking back to their car at this point. A long day for them.
I'm just happy it wasn't me :)

Todays video. Two today highlighting the contrasting qualities of the Dark Angel of Atlanta herself, Chan Marshall. This girl can nail a whole range of different styles from Indie to rock to grunge to jazz to blues to  melancholy southern gothic.
I've been a big fan of hers for years and her back catalogue has introduced me to so many different artists I would never have found myself.
As soon as I watched two of her videos I knew I'd crossed a great frontier in music and she has never let me down yet. The first is pure southern gothic.. the second some may find extreme but it has a haunting intensity. Her songs have an edge and a dark ambiguity I find compelling as I'm not too keen on middle of the road music or bland, overfamiliar subject matter in songs usually.
These are certainly not that.

'Forgiveness? I pray the ground trembles under the impact of their falling bodies'... New York city female multiple abuse victim.

I'm surprised Alex didn't want to do those again - I did them once when I was at a summer school week at Edinburgh's Heriot-Watt University and loved them - made a new (Glaswegian friend too who I'm still buddies with now). I liked the Kips best.

We did them from a pub towards the SE corner of the hills - can't remember what it was called but I more or less ate them out of puddings! ;-)
Carol.

Hi Carol.
Pubs and hotels are a luxury Item I rarely indulge in now. Need all my money for petrol at £60 quid a tank. Alex is trying to finish his Corbett's this year so he's not interested in anything else. Well, except new bagging list ticks.

Looked up at these hills many times from the A702 Bob. The highest I've been was a car trip up to the Hillend Ski centre. Looking at these pictures makes me wish I'd never gone into exile in England. Not really though, the only regrets I have is that time and tide are against me.(Amy McDonald is singing 'This Pretty Face' on the radio)
Love the Cat Power. My youngest daughter's partner is a multi-instrumentalist with an up and coming young female called Al Spx who goes under the name of Cold Specks. See what you think.

These used to be my home hills when I stayed in Balerno. I think that the round of the Kips and Scald Law is the best in the Pentlands. Bit busy in summer, though just right for this time of year. Must go back sometime.

Hello Jim,
Checked Cold Specks out. Hope they do well. Very hard to make any money in that area now though as free file sharing has ripped a hole in any profits and even the festival circuit is contracting.

I'd agree with that Neil. Nice shape to them from every direction.

Been a while - have done these hills many times in all seasons, its hard to believe sometimes you are right next to Edinburgh when down in the glens! Good to hear you are not going to pubs and saving your strength for the hills!

Could the pub Carol mentions be called the Flotterstone Inn? Its SE just off the Biggar road?

Hi Hunter.
Hope you are still getting out and about. Might be the right pub but I wouldn't know as being a day shot from Glasgow I'm never in the Edinburgh pubs these days. I only usually visit pubs if its a multi day trip somewhere to get a break from the tent.
Pub alcohol is a luxury item I cant afford these days. Petrol and food or drink...A no brainer.

Maybe you could work for Alec Salmond promoting goood health and fitness for mature citizens?? You must be one of the fittest!

Love the photos from Glenshee - the snow there looks nice and pristine. Was up in Templeton woods in Dundee last Saturday and saw red squirrels, woodpeckers, roe deer, jays and buzzards so the wildlife is warming up for spring.

took walk around Dalkeith country park (500 acres) yesterday-
spotted deer and a buzzard flew right past my face by about 2 inches! was sitting behind a tree and it never saw me as it flew past! an amazing experience!

Still enjoying your blog and all the photos - keep up the good work!

Hi Hunter.
Explored both those parks a few years ago. Great for wildlife. Dalkeith park is big and sprawling enough to get really lost in which I soon did during a summer bike tour. Only been there once but was very impressed with its layout and history.

agree with you there - Dalkeith Park definitely a 'hidden gem'. Also, forgot to mention I saw a kingfisher when in Templeton Woods which was a delight for this time of year!