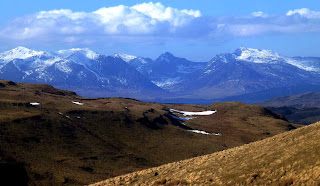 A large scale  panorama of the Arran peaks seen from the Heights Of Clyde Muirshiel. This is a very underrated area and the largest regional park in Scotland. It also has exceptional views but only if you enter it from its western border,in the seaside town of Largs, which we did. This was the last trip of Easter and the place was jumping with holiday makers. 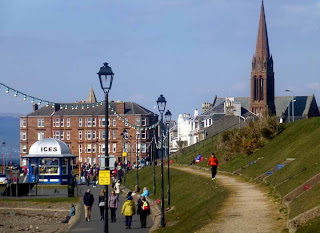 After Ron picked me up at my house in his car we parked near Largs Academy, which was closed for the Easter holiday. The tenement building in the above photograph used to have a name plate called GoGo Street on it, which I thought was a great name for a street and made it really stand out. It was memorable. I was disappointed therefore not to find it. Maybe I missed it or its fallen off. 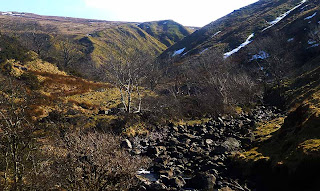 This street is where the Gogo Water enters the sea from its journey high in the moors of Clyde Muirshiel. From the Academy, halfway up the hill in Largs, follow the same road upwards until you come to a farm and a track leading uphill through scattered trees. This is the easy, fast way into the park and takes you past the farm on a good landrover track without difficulties until it reaches Greeto Bridge not far from where the Greeto and Gogo waters meet and merge. 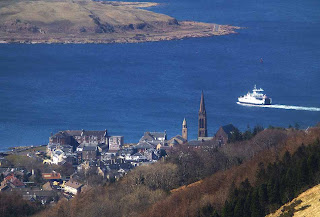 A different option however lies to the right of this farm where the last of the houses end. We took this. A descending track runs down through woods in a deep gorge until it meets the Gogo water then runs along beside it, still on the left bank, past a green iron bridge, into the hills. Although a good broad track at first it gradually becomes harder to follow and turns into a grassy path with fallen trees, large boulders and some muddy bits to negotiate. Its very wild and scenic though which is why we went this way.
Keep following the river until you leave the woods behind and come out into a rocky open meadow area which often has sheep grazing on it. Here there is a faint path leading diagonally upwards across grass slopes on the side of the gorge until you come to the meeting of the Greeto and Gogo waters. Follow the Greeto water upwards past tumbling waterfalls, deep pools and smooth waterslides, many of which resemble well known beauty spots in the Peak district and Yorkshire dales. Although only half a kilometre long this tumbling area of falls is a beautiful and exiting section. Quiet and peaceful usually as is the entire walk.
Away from the outdoor centres at Cornalees and the Castle Semple and Muirshiel hill HQ above Lochwinnoch this must be one of the least visited areas in the UK which is why I like it. An empty jewel of lonely, remote summits hidden in full view.
http://www.clydemuirshiel.co.uk/  Bags more information here on the official site including maps, videos and pictures of the area.
This walk has long been a favourite of mine and I've been coming here for  many decades. Since I was a teenager. 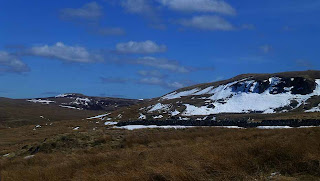 Crossing the ancient and ramshackle Greeto Bridge which spans the river at this point follow a faint track across the moors to the deep rift of the Chasm, marked on the map as a waterfall. Here the Gogo has found a weakness /fault line and carves deep into the hillside. Its a short steep sided rock ravine that is very difficult and dangerous to enter but you can get a taste of it further upsteam where you can get down onto the river bed itself.
Upsteam from here the energetic can continue across the moors seen in the above photo to the distant and lofty Hill of Stake. At 1712 feet or 522 metres its the highest summit in the entire park and a Marilyn and a hump. After two consecutive hard days out however I wanted a far easier day this time so we cut down to the lower summit of Castle Hill where there is a seat, this small cairn, and a large circular 'Mountain and landmark finder' telling you what it is you're looking at. 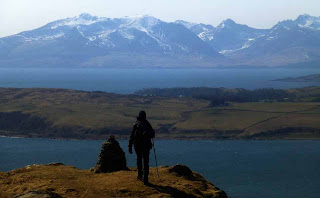 This is surely got to be one of the best views in the central belt of Scotland with an incredible  panorama over the Firth of Clyde and the islands of Arran, Great and Little Cumbrae, Bute and the mountains of Cowal. Bit hazy today although we had the usual day long sunshine. Naturally, I take that for granted. No rain on a hill now for five years apart from an occasional light shower once a year just to wet parched lips. You  need to click on these photos to reduce the haze more. I've made most of them a larger size as this place is something special. 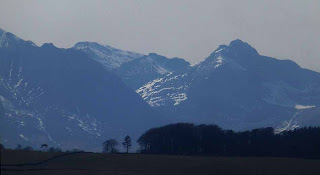 A zoom of the Arran peaks with Great Cumbrae in the foreground. 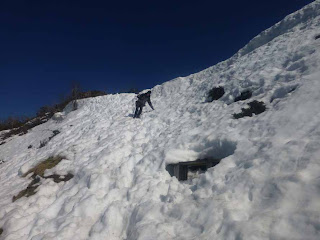 The hardest part of the day was coming off Castle hill on what is usually the tourist route up. Normally there is a flight of wooden steps under here but deep, fairly icy, hard packed snow was a surprise as we had left our ice axes in the car. There was very little left on the heights, melted off under a strong sun.
Incidentally a week of rain has cleared most of the snow off Scotland's Munro's and they are now in prime walking condition. 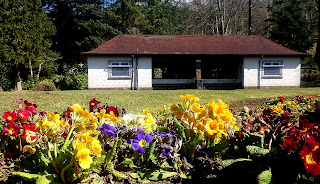 Milder weather and rain has done wonders for the Spring flowers as well. This is the small park directly below Castle hill Looking towards the Robert Burns Memorial Garden where we went next. 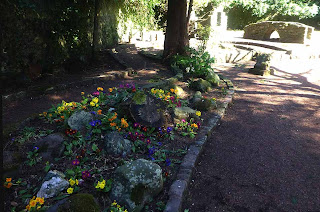 A small replica of Ayrshire in Largs, with miniature Alloway graveyard and old bridge (brig o doon).
Nice spot, sadly looking a bit run down probably due to the usual teenage nightly escapades of bad behaviour under cover of darkness and council budget cutbacks. Flowers were stunning here though.
Maybe they need a few of these to keep the peace. Nothing like a pair of sharp fangs in the darkness I find to keep folk under control. Always works for me. 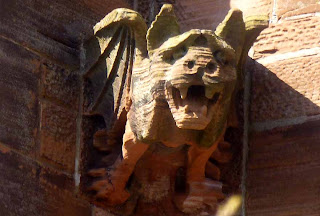 A couple of you long time viewers may have already seen this video before but its one of my favourites so I'm posting it on here for the first time. The stunning Coco-Rosie. A sister act not afraid of original ideas in music. Cant see them ever being hugely successful but they are certainly very different from the pack.
Putting creative ability before commercial appeal they will probably be highly influential some day and another act will make a lot of money out of their ideas.
Head David Bowie's new Album. Unimpressed by it. Meanwhile the stunning, earlier 'Heathen' is still vastly under rated and jam packed with great songs. Hype, a long absence, and a 'living legend' tag will get you to Number one it seems . Be interesting to see what the reviews are for his latest CD five years down the line though.

Anyway I've always thought this video might be inspired, in part, by the Bronte sisters and their troubled brother Branwell who incidentally died standing up at the family fireplace I believe. He was heavily addicted to alcohol, married ladies and small bottles of laudanum. An unusual way to go but I'm sure he had fun. They created an imaginary world for themselves as children where terrible adventures happened but it had a strict set of rules, which, if crossed, merited punishment. A south seas mythical kingdom of two warring islands. Gondal.and Gaaldine
http://en.wikipedia.org/wiki/Gondal_(fictional_country)
Posted by blueskyscotland at 18:21

Fabulous views, much better than the ones you get from the waterside in Largs. Will see if the easier version might be possible for us...

Brilliant views Bob. Definitely worth enlarging the pictures to take a look.
I guess Gogo Street got up and went.

If music can be Avante Garde, then I guess that's Coco and Rosie. Looked at their Wikipedia page and they've led quite illustrious lives. I wonder what happened on the US/Canada border in 2007. Cold Specks are over in the States at the moment opening for Jim James. Have a look on Youtube at his 'A New Life' video. A slow start and maybe not dark enough for you but I think you'll like it.

Hi Anne.
The first section of the farm track is fairly steep then its mostly flat to Greeto bridge and you can drop down from that point to a nice pool and waterfall. Beyond that point going downstream its not suitable for children. Alternatively The Castle hill view point can be reached from a small car park on the A760 just above Largs beside some trout fishing ponds. From here its a short easy walk on a grassy path to Castlehill and fantastic views.Very suitable for young children on a good day. Douglas park and the square one across the main road are good as well.

Hi Jim.
Added a good link to Clyde muirshiel park and noticed on the excellent zoom in map on there its still down as Gogo street so maybe its just the sign that's fell off.
I'll certainly look up Jim James as its got to be better than David Bowie,s new album and I'm usually a fan :)
As Crocodile Dundee once almost said. 'Shit. you call that dark.... This is dark!'
I've not actually put any of my darker collection of you tube videos on here yet. Don't want to scare off the horses or anyone else viewing :)
This is my nice and gentle, middle of the road collection, so far.

That looks great Bob. I've only ever been in the Park via the Lochwinnoch entrance. It's a bit bleak round that side. I will definitely use your route some time, looks as though its worth leaving for a clear day.

Hi Neil.
Yeah I don't fancy the Lochwinnoch side much myself except on a bike tour. Only ever climbed the Hill of Stake from Largs. Longer way in but the scenery makes up for it.

I haven't heard the latest Bowie - I probably gave up on him when he became mainstream. I did admire him for being able to stay successful in the music world for so long though.

That first shot of the Arran peaks is a cracker! :-)

I used to sleep in my car up above Largs - up near Loch Tom - very peaceful and pleasant :-) I remember having a great evening of heavy drinking and laughter with 3 of the locals in a bar all one evening (2 guys and a girl) - of course, they were doing the drinking as I'd already given up by then. They were very friendly though and I won't ever forget the evening, it was fun and really nice for a stranger to the area to be made so welcome.
Carol.

Hi carol.
Largs is a great place and a ferry crossing for Great Cumbrae which is like a tiny Scottish version of The Isle of Man only without the Laxey waterwheel or TT races.
Loch Thom's a great area too. When you are up there on the moors you'd never guess its only 20 minutes in the car from Glasgow.
I was going to go up to Skye for the first May weekend but the weather looks grim.