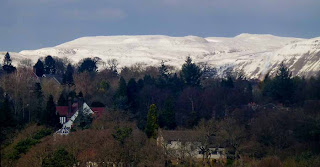 A view of Bearsden and the Campsie's from Glasgow. I didn't go away for the Easter weekend but with a good forecast for Saturday and Sunday I fancied going somewhere. Alex found himself free on the Saterday and suggested Beinn Ime near Arrochar so we went there, setting off from the Butterbridge car park in the early morning. 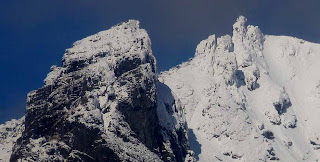 On the way we passed this fine mountain which was plastered with sparkling snow and looked like a true Alpine peak. The steep rock buttress in the foreground without much snow has a classic severe rock climb running up it called Ardgarten Arete which I climbed with either Alex or John in the Summer of 1993 according to the date in my guide book. Recess route VD and Punsters Crack S on the same mountain are much better routes though. Any guesses as to where this is yet?
We parked at the Butterbridge and set off, already aware that we were in for deep snow conditions underfoot. 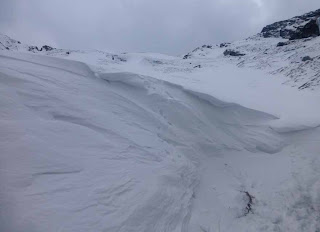 The snow was very sporadic, probably due to high winds when it fell. Ten foot deep in one area, bare slopes further on. 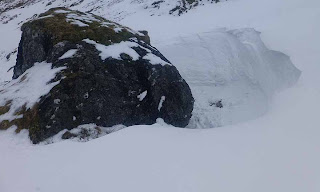 Luckily for us it was solid enough to walk on without sinking in too much. The first time this year we have been able to walk over the top of the snowfields rather than wading through them, knee or waist deep. Best underfoot conditions all winter. Still hard graft though. 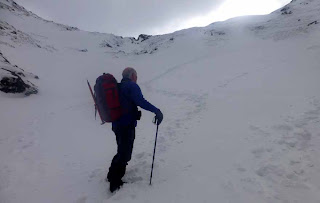 This was why, when we reached the col, we didn't go up our intended hill of Beinn Ime, the highest peak in the Arrochar Alps at 1011 metres. It looked a boring slog to be honest, just an uninspiring trudge up a long incline to the summit from this direction. A baggers mountain, though we enjoyed it well enough when we were addicted to doing Munro's ourselves. 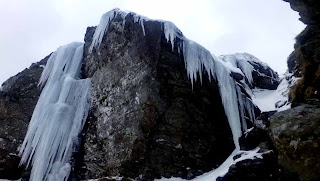 Although only a Corbett at 859 metres, Beinn Luibhean looked as if it had far more character to it when approached from this direction with several small ice falls and short cliffs to negotiate. We worked our way through a line of easy ramps and chimneys towards the summit. We thought at one point we might need crampons but our boots had just enough grip to get us up as neither of us fancied faffing about putting them on with a bitter east wind already numbing the fingers. In sheltered places on the mountain it did feel like spring though with some warmth in the sun at last. 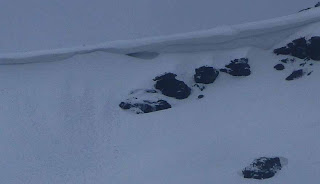 From my own experience I think one of the reasons we have had so many avalanches this year is that heavy, deep snow has landed on already wet, saturated slopes and the freezing level at night has stayed comparatively high below the top layer. Frozen, cold to cold surface bonding has not really  occurred much this year despite the perception that its been a harsh winter as its not really been that cold for most of the winter period except for the easterly wind making it feel bitter on the slopes. Anytime I've been out the hill snow has not consolidated as in other years and has usually had the consistency of heavy wet porridge or deep,soft sugar. When it does avalanche it sets even more like concrete due to a much higher moisture content in the pack. That's my theory anyway. 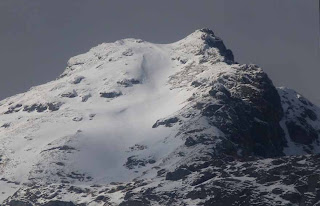 Lower hills also tend to get better views as you are not looking down at everything else. Some of the views from Europe's  highest mountains are slightly disappointing as everything appears much flatter gazing down from above. No problems with that here. Three quarters of the way up this is looking across at the summit of Beinn an Lochain, a fine steep Corbett above Loch Restil near the Rest and be thankful. 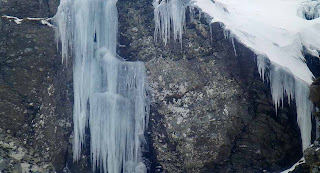 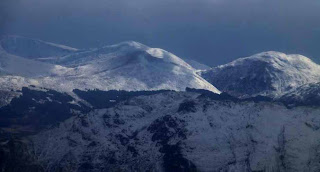 A view from the summit looking south towards the Loch lomondside hills. 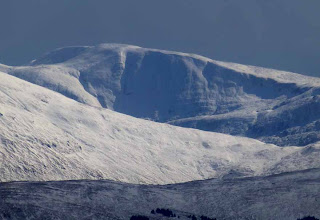 The Luss hills looking like a high Arctic region. This winter has been weird for several reasons. The snow has fallen heavily in some areas lower down like here and Arran and Kintyre which had ten foot deep snowdrifts at the road; yet Ben Nevis, Scotland's Highest mountain at 1344metres has bags of ice but not much snow below 700metres. Most of the north west coast above Fort William is the same with drought and wildfires a real problem due to a year long dry spell up there. The West of Scotland suffering its own version of a year long drought!!! That's Global Weirding in action right there. A  mini Black Swan event on our own shores but just possibly the new normal in years to come. Or, if the ocean currents keep shifting, we could look back at this winter as one of the better, warmer ones from the past. Its certainly been warmer than the two, back to back, winters posted here around 2009/2010.  Anyway....happy times ahead for hillgoers whatever happens. 'A change is as good as a vest' as my old mum used to say waving me off on the three mile walk to school. (no wonder I don't feel the cold much...I wore a freshly changed Tee shirt to School winter and summer. You would get beaten up for being really soft if you wore a jumper there. We was well hard in South Pollok in them days :0) 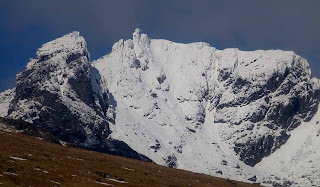 As promised... the hill. Did you all get top marks?  That's right folks ...Its our old friend 'The Gobbler.'  I've also heard Conic hill referred to as Chronic Hill, Liathach as Lia-class and the Pap of Glencoe as the Breast of Ballachulish. All genuine mistakes incidentally so the average city dweller has no chance at getting the more intricate Gaelic pronunciations spot on without help. Good fun trying though.
This bit was prompted by an article I read recently suggesting we should simplify the more awkward Gaelic names of mountains for tourists to make it easier for them. Personally I've always enjoyed mangling the language of my ancestors and take pride in just how far away from the real pronunciation I've always achieved without even trying. It's a gift!

Todays video is one to warm you up if you are feeling cold after the photographs. Soul singer James Brown had the title 'Hardest working man in Show Business.' This influential and artistically  creative group could give him a run for his money though. Great video and if you know of a rock group working the stage harder than this front line did I'd like to see it. More sweat than a very sweaty thing. Brilliant stuff.


Bet Tina really loved jogging and playing bass guitar at the same time during this :) Capital idea  David. That'll teach her to form her own group.
Posted by blueskyscotland at 15:47

I really do love that area Bob and so much snow! Not a drop here mostly. Not a drop of water mostly either. We need rain please!
Simplify Gaelic mountain names? pshaw! They should lock them in a room with Brian Blessed repeating the names over and over until they get them :)

Hi Alistair.
Yeah, As the old timers like Alex, John and I have not been up those hills much, apart from the Cobbler,for almost 20 years it felt like a new district for us. Great area and so lucky its under an hour from Glasgow.
How about if we tow a few icebergs from the Clyde behind a boat up to where you are. That should do the trick, water wise.
Brian Blessed. Wont you have to teach him Gaelic first or is he already fluent in it? ('In it'... by George I've just mastered another language myself...Home Counties/Inner London :) Magic init? Gay-lick should be a dawdle for me now.

That's a lot of snow! I like Beinn Luibhean, it's one that I've been up a few times. As you say, less of a slog than Beinn Ime, and you get a good view of BI from it. I'm just back from a couple of days walking in the Oban area; no snow there at all. But all the biggies- Ben Lui, Ben Cruachan etc all still have a good covering. I see that MWIS is forecasting some more snow to come!!!

That's some snow there for the southern end of Scotland - some of those drifts are truly massive!

I knew from the climb names which mountain you were talking about as they're mentioned a lot in my 2 regular reads - Borthwick's 'Always a Little Further' and 'Mountain Days & Bothy Nights'.

Hello Neil.
Its the wildlife that concerns me most. Hope they know to wait for more settled conditions before breeding but these things are formed over decades and centuries of stable patterns of behaviour and they may not be able to change fast enough to keep up with our unpredictable cycles of weather.
An age of mass extinction surely looms ahead.
Great woe descends on the little funny things in our midst.
Yours faithfully.
Cassandra.

Hello Carol.
Two fine books on the outdoors. Another, if you haven't read it, is 'Rope boy' by Dennis Gray.
A funny, hair raising, and informative account of a bunch of well known Yorkshire hill walkers and climbers in the 1950's.
One cunning plan in this book was to blow up Napes Needle in the Lakes with several sticks of dynamite as it 'needed seeing to' and was 'a tourist eyesore.'
Well worth a read. I found it years ago in my local library. Probably out of print now which is a shame as it was a real classic. Still available on Amazon I see.

It's been a great winter for the ski slopes Bob, a couple of our walkers went midweek a fortnight ago and were amazed just how busy Glenshee was. I believe they're still doing well.
I love the ice curtains.
My kids know I like Talking Heads so one of them got me a copy of the Stop Making Sense video. Love it !