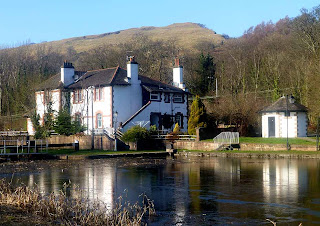 The reason for the long title is that this is two bike trips combined into one. When I was doing the 'Glasgow. City of Towers' post a couple of weeks ago I used my bike to get around quickly over two separate days, both of them absolute crackers, though very cold. This is the canal at Bowling above and as you can see its frozen.
It was minus -8 overnight but as long as you cycled in the sun it was fine. 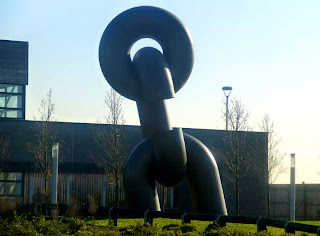 I used the Forth and Clyde canal to reach here as its a green and pleasant highway not far from my house. Traffic free. Photo is the unusual giant chain link sculpture outside the Golden Jubilee hospital in Clydebank. 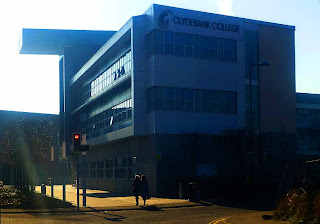 As a keen amateur photographer you always think you can do better whenever you go out which is what gives me motivation, even in areas I've been before. You always see different things, or new places or the light is special. These photographs should hopefully highlight that. Taken into strong oblique sunlight I'm really pleased how this one turned out. Fantastic light. Be even better next time though :) Might even bike in Kate Moss as a model if she can get out her bed in time. It was an early start with ice still on the tow path puddles but the light was exceptional. 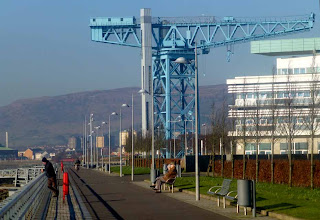 One of the great things about the Forth and Clyde Canal and The River Clyde around this area is that together they give you many miles of traffic free, walker/cycle friendly corridors to explore that link up with loads of other places, parks, history, gardens and landscaped waterfronts. This is in front of the new Clydebank college where it faces onto the River Clyde. Titan Crane behind. Mist still clinging to the Kilpatrick hills in the distance.
Clydebank, of course, was famous for its shipbuilding and was heavily bombed during the Second World War. The Polish destroyer ORP Piorun happened to be undergoing repairs at John Browns Shipyard at that time and returned fire with its guns. Over 500 hundred civilians' were killed and hundreds more injured over two nights of carnage. Worth a look. Once inside Click on picture of tram to see full impact on just one street.
.http://www.educationscotland.gov.uk/scotlandshistory/20thand21stcenturies/worldwarii/clydebankblitz/index.asp 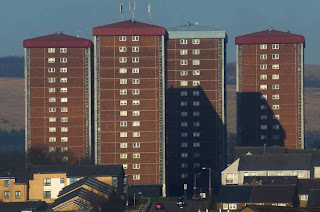 These flats at Radnor Park were built after the war to rehouse folk. The big employer in Clydebank, apart from the ship yards, was Singer's. In its heyday it was the biggest sewing machine factory in the world: It had Britain's largest clock face at 26 feet in diameter adorning its huge iconic clock tower and it was the second largest clock face anywhere in the world. It employed 12'000 to 14'000 workers when it was at its peak including my mum and dad who met there. Time for an 'Aw.' 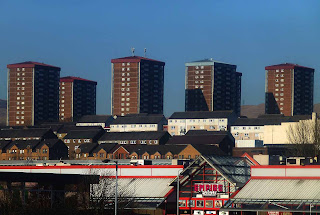 Now Clydebank has a multiscreen cinema, a shopping centre and a floating chip shop. Progress I suppose.
Time for an 'Ach, that's no right. Where's all the full time jobs gone?' 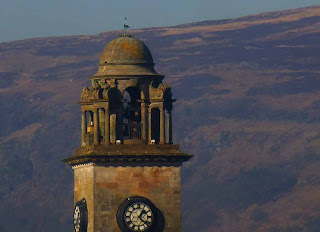 Town hall clock tower is still standing though with the massive wall of the Kilpatrick hills behind. 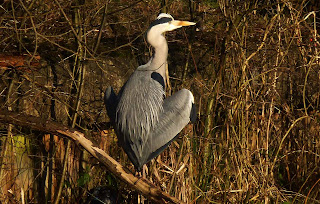 A heron enjoys the morning sun, spreading its body to catch the maximum rays. Didn't fly away for once, probably because it was drying its wings. I'm a sneaky snapper me.  I creep up on nature when its disadvantaged and discombobulated. 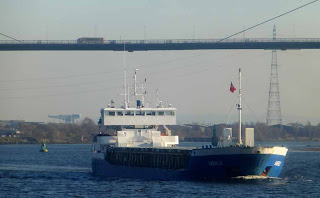 I was lucky enough to see this large cargo ship coming down the River Clyde near the Erskine Bridge. Its the Merle and I had a feeling I'd seen it before on the river so I looked it up out of curiosity.
http://www.shipspotting.com/gallery/photo.php?lid=525298
If you look at its history in here its the modern equivalent of an international puffer. Carries general cargo and fairly gets around Europe. Hard working ship. Probably carrying a load of scrap metal here from Renfrew Car breakers yards as that's big money nowadays and highly sought after. Next stop could be Germany, Holland or London. It used to be called The Apollo and I've snapped it before on the Clyde years ago. Good to see the river is still getting used for some trade. 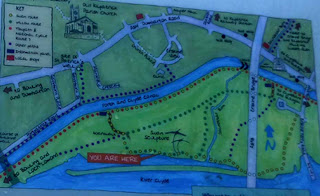 A new area and a new island bag for me. Yippee! The Saltings. Its a recent development under Erskine bridge at Old Kilpatrick. You always could go out onto the wasteland/ marsh here but it was pretty rough and boggy with few tracks and not very bike friendly. Now its been transformed with a network of good easy paths and I'm calling it an island because ,as you can see from the map, its surrounded by water. An island you can cycle or walk around. 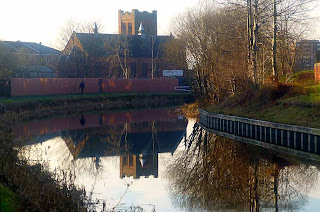 I'm on the other side of the Forth and Clyde Canal now heading towards the city centre. This is near Maryhill. A still, windless day of great reflections. I took most of my City of Towers shots on this bike trip. Nothing like a bike for covering miles across a city yet allowing you to stop anywhere you like. 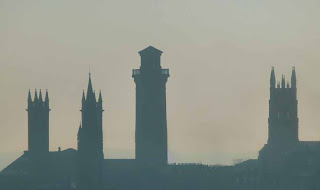 Park Circus Towers from the canal. It was another smashing day with a misty, pastel yellow/red light great for silhouettes. 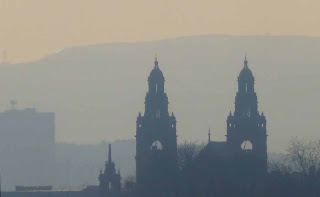 View west across Glasgow. Glasgow Museum and Art gallery Towers. I always think this building could be equally at home in an Indian city. 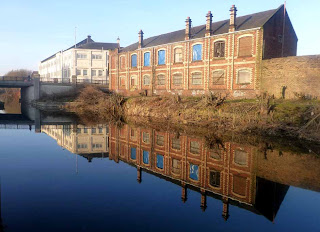 Perfect reflection in the canal near Maryhill/Ruchill. 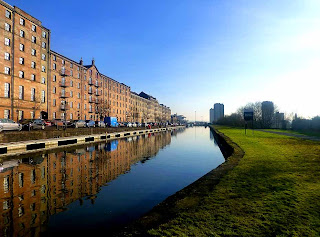 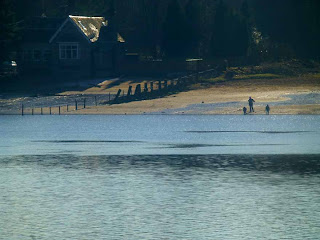 And finally...Family playing on the beach at Erskine slipway.

Keeping to a general feeling of times past here's a couple of cracking videos you may like. Double 'aw'. Those of you of a certain vintage may remember a time when children got dirty and played outside unsupervised. (Actually the kids around me do that all the time as well so its only some areas and a media brainwash sort of thing that sometimes goes on.) Want an Example? Weather forecasters and news now... Snow in March! Whoever heard of that happening! Its the middle of Spring! Yeah, right. I'll keep calling March a winter month thank you. It always was before. Its bad in Arran now admittedly but I went there in Late March ten years ago and it certainly didn't feel like Spring. I've had snow in early May over there up on the ridge and didn't think it was that unusual so I'm keeping March firmly in winter until I'm proved wrong.

Belter of a video and a great song as well. You might see yourself in here.

Brings back memories of short trousers and very sore knees as a child. Ouch!

I should have posted this second video along with the Glasgow. City of Towers Post but I'll slot it in here instead. Loads of memories in here for anyone brought up on a Glasgow housing estate in the 1950's and 1960's. You might even see your house in this one.
PS. Just found an amazing video of the development of Glasgow's districts after the Second World war. Its a real winner so I've attached it to the Glasgow. City of Towers post from two weeks ago as it explains that entire post perfectly.
Posted by blueskyscotland at 16:25

Cracking pictures Bob and great links too. The kids of today, unless they are majoring in Scottish history have no idea what Scotland went through in WW2. There's an entertaining and educational BBC site at Scotland during the second world war . My granddad was hit on the head sitting on the outside kazi by a turnip from a bomb exploding in a nearby field. The story got him plenty free booze.
I don't remember the Apollo, but I remember the Merle as the Lys Clipper in the late 90's on the Humber ports. Back in my stevedoring days, ships were always changing their names and re regestering, especially the two to four thousand general cargo ships. A lot to do with the 'Flags of Convenience' fiddle that probably still goes on.
Great canal reflections.
I can relate to the first video clip Bob. We used to scavenge around the tip for empty bottles to get thruppence back. Our mums were OK with that, but we had to be careful as there were always smouldering underground fires.

Hi Jim.
Could have been a 'Spud missile' coming at him. I noticed it was also called the Lys Clipper. It certainly gets around. Watched your BBC spy vid. Very good.
Its amazing how you forget minor things then a video like that brings it all back.
I remember how chuffed I was getting my first pair of jeans and being able to fall down on my knees without any pain for the first time. Short trousers and falling over on that rough,brown gravel they always seemed to have mountains of back then in back courts was not a pleasant combination. All the playgrounds back then also seem to have been deliberately made out of the sharpest objects they could find then they threw you out in short trousers when all the tops of walls had either sharp spikes on them or broken bottles. And kids today think its hard. I'm amazed how anyone from that era ever made it into adulthood :)

The still waters and misty towers photos are lovely.

I've been wanting to get out on my bike but I get very cold cycling compared to walking so I think I'll have to wait until this horrid, cutting east wind's gone!
Carol.

Cheers Carol.
You might have to wait a while. This cold spell is predicted to last well past Easter. It could swing either way with climate change. If the North Atlantic Drift changes course this could well be the new normal for the UK.
Just as well they've dropped the global warming tag though my sister says its been a very hot summer in Australia yet again.