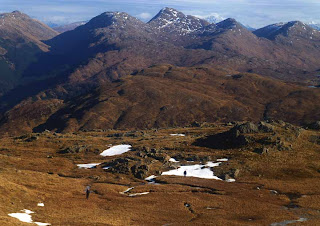 In the morning we cycled out from the bothy and motored round to Beinn Resipol which is a smashing hill with stunning views over the western seaboard. 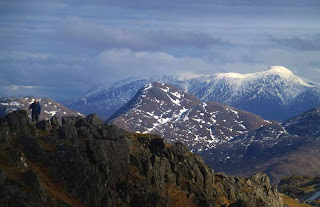 Alex with a view back east towards the Nevis area. 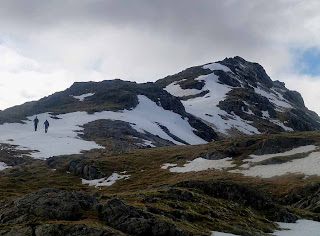 Coming down off the summit. Just enough snow to make it interesting but not enough to hamper progress as its a fair old trek to the top for old duffers like us. As I was fresh I think I enjoyed this hill even more than John and Alex as they were tired and heavy legged from the first day which was fairly tough as well. 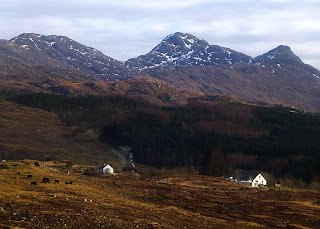 A view across to Sgurr Dhomonuill, at 2914 metres the highest peak in the area. 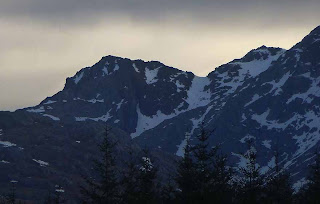 Garbh Bheinn is the most dramatic though with its line of rugged cliffs. Hardly seen a soul all weekend and had the bothy to ourselves. 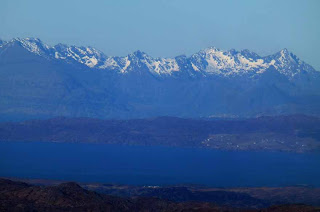 A view of the Skye Cuillin from the summit. 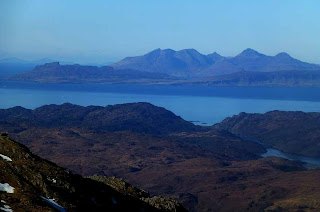 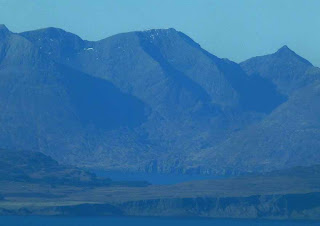 A zoom of the ridges over on Rum. 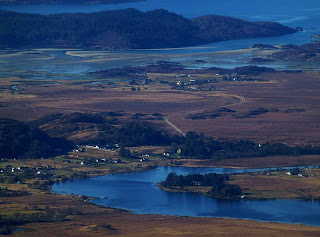 Looking towards the seaward end of Loch Shiel. 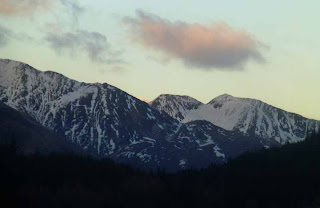 The mountains around Ballachulish. Mamores region. Taken on the way back. 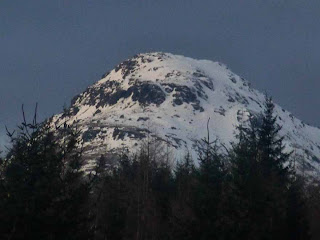 View from the real food café where we stopped for chips.
Very good weekend. Excellent company and weather.
Video this week asks the question 'where is the limit for extreme sports nowadays and where will it end?. Posted this because an 11 year old is shattering records previously thought just 10 years ago as being completely impossible. An English girl of roughly the same age has climbed the massive walls on Yosemite with her dad recently. Makes you think. I'm glad I did my climbing when E 1 was though of as a hard route. This is just ridiculous. I probably couldn't even get off the ground on the route outside shown at the end. 40 years from now will we be able to fly without wings? She makes it all look so easy as well. Gutted!

Stunning photographs.
I watched your video too, most impressive...

Cheers Anne.
I used to watch her mum in climbing competitions on TV a while back when I was still into that sport myself. Just makes me feel really old!

Brilliant Bob, looking at these pictures I wish I could go back twenty years and take up hill climbing seriously.
The picture of the seaward end of Loch Shiel wouldn't look out of place in a gold frame in any of Scotland's stately homes and castles.

Climbed Beinn Resipol for the first time last year, a brilliant hill and one that I would go back to. It's a long and twisty road in but worth every mile. Cheers

Both ends of that loch are the best bits Jim. The middle section is not as scenic as the start around the monument to the clans or the seaward end where it narrows and twists. Major logging area though where I was. Good for the economy.

A great hill Neil. Almost feels like an island when you cross into Ardgour and Sunart and leave most of the traffic behind.

Cracking photos! I'm wanting to go up to Loch Quoich but it still looks like there will be more snow than I want. I'm still quite unfit and I'm not very confident just now either so would prefer none really. Think I'll have to stick with the Lakes a bit longer and hone my skills on our home ice :-)

I won't watch the 11-yo record breaking climbing lassie - it will just make me feel even more inadequate tomorrow when I go back to the climbing wall!
Carol.

Hi Carol.
Still a lot of snow up that way. I'd maybe leave it until the end of March or early April to do that area as the Munro's still have a good white covering on them still.
May be some more yet to come as well.

Great weekend, need to get out myself before the snow goes! As for the vid, the best gymnasts have always been prepubescent girls, so suppose it makes sense for rock climbers too as the physicality required is quite similar - good flexibilty and strength to weight ratios!

Hi Bob,
Yeah, the weather is looking too unsettled for me to go to Loch Quoich next week so I think we're just going to the Lakes. I'd have been on my own anyway which would make me even more nervous and fumbly if conditions were bad. My mate Richard won't do Scotland until at least April/May and insists that the snow has all gone.
Carol.