Damsel Days. Away With The Fairies.Damselflies and other insects.

One night during the recent heat wave when sleep didn't happen I opened my bedroom window and sat looking up at the moon. No wind alas. A tiny moth smaller than my pinkie nail fluttered into my view then came and sat quietly on my knee. Once I'd squashed it flat ( they eat clothes you know) this got me thinking of other things. Would it be that easy to find and squash fairies? What do we actually know about fairies? Do they actually exist or are they just a myth? How do we find them? I decided to find out. I would use strict logic in my quest.
Looking through the internet for clues on how to find fairies I discovered that there are many different types. Fairies change their appearance depending on where you are in the world. In the Northern Celtic Nations however of which the UK is a part they are usually drawn as small winged
humans, usually young and female.
Does any creature living now or back then in the days when people still believed in fairies resemble this profile? Maybe they were the inspiration for fairies perhaps?
Let's examine the evidence. I typed in 'Fairy' into the internet then picked 'view images'. My goodness readers, there certainly are a lot of strange and unusual sites out there!
The images I wanted however showed fairies playing, always in the same settings. Woods, orchards,  meadows, grasslands, usually near ponds, waterfalls or pools of still, clear water. 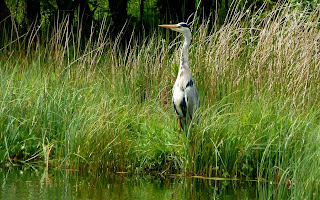 Their wings might give us a clue. Nearly all had the same stylized pattern. They were not usually depicted with butterfly wings I noticed. 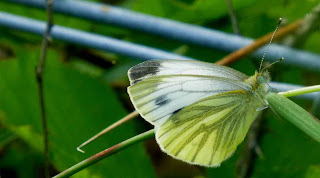 Like this Green Veined white butterfly seen here. I observed them mating, sticking my nose into their affairs. When they mated there was nothing extraordinary or 'Fairylike' about them. You could not confuse them with small flying humans. 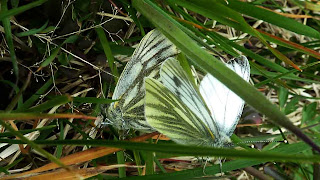 When they had sex it was usually facing away from each other. Not very magical or profound. 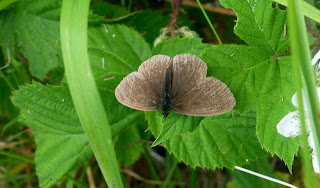 I ruled butterflies out of the equation... like this Ringlet Butterfly above.
Fairies were nearly always depicted with transparent wings. Maybe this hoverfly was the inspiration? 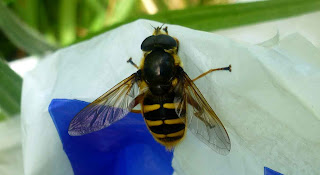 On closer examination I ruled this out too. After careful dissection I could discover no sign of  hidden arms or legs. They did not cry out with human words when pressed with a finger. 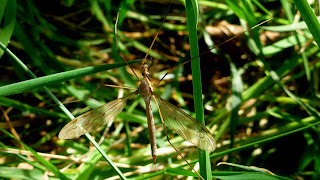 Some books suggested Crane flies might be responsible but examining this specimen close up it looked too plain and angular to have inspired anything as beautiful as fairies were reputed to be.
They were said to be gorgeous, enchanting little creatures, the colours or the rainbow, with wings you could see right through, always laced with delicate patterns like a spiders web effect. All the books and paintings described this fact.
Bewildered I sat down in a sheltered hollow beside a small waterfall.. and then they found me. 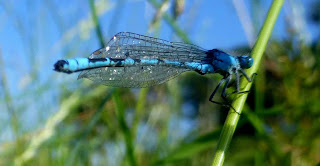 How do you find Fairies? Easy. In high summer, especially during heat wave conditions, which they love, you will find them near water and streams. In places of genuine beauty just like all the books describe. It's no use chasing after them as they are shy creatures and just dart away but if  you sit down quietly, in a spot they like, and introduce yourself to them in a soft calm voice they will come to you and will slowly learn to trust you, revealing details of their private life. 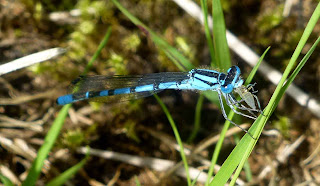 Once you have their confidence they will happily eat beside you. They might offer you some but all the books warn of the dangers of eating fairy food. It is bewitched. So just say no to bugs and aphids then. Politely decline. 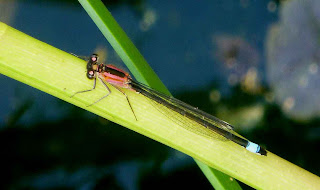 More will gather round you of different types and sex. This is a blue tailed variety. 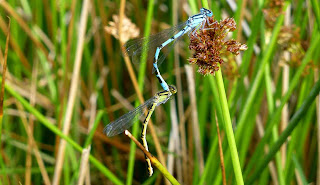 Gradually long forgotten secrets unfold. This is a pair getting to know each other. First the male holds the female in position. If she likes him she will reciprocate in kind by bonding to create a circle. 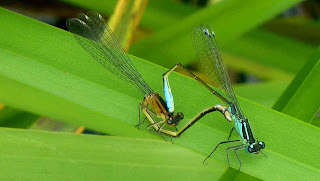 Sometimes ,when the male hangs from a flower or a branch, this creates a perfect heart shape. 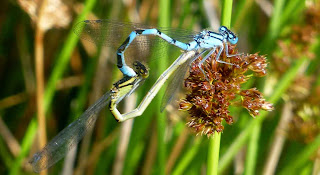 This would have been a common sight to folk in medieval times working all day in the meadows and fields. The origin and inspiration for the human heart motif perhaps?
http://en.wikipedia.org/wiki/Heart_(symbol) See what you think? I'm convinced. We have forgotten so much information about fairies as we lead such busy hurried lives these days. We no longer sit down and talk to them anymore. They existed long before humans. They might survive after us if we don't forget them. The beautiful demoiselles.
The old French word for a pure young girl incidentally was damoisle, which mutated into its English form as 'Damsel' A word not much used today.
Put the two together and you have Damsel flies = Fairies. Puzzle solved? 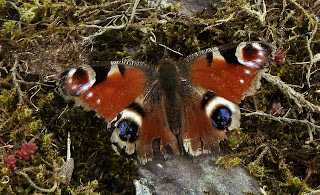 With the word out that I was now a friend more and more little flying creatures settled round me in a ring. A Fairy Ring. The old books were true. 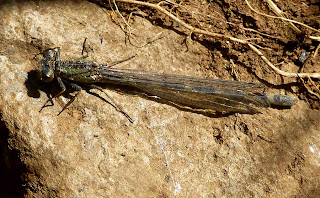 A larger green species whose wings sparkled like fluid glass in flight. Emeralds in fact. If you were a medieval peasant lying in a field after a couple of jugs of mead you might well see little flying females hovering around you and start talking to them. Away with the Fairies. 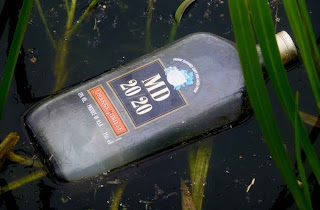 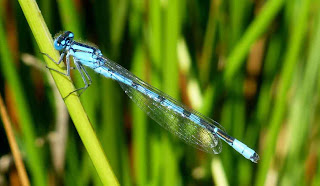 Dozens more arrived including some who were not so welcome. 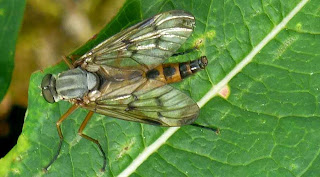 Clegs had found me down in my hollow. When I arrived back in my house I found I was indeed 'transformed' as my arms and legs were covered in bumpy bites. That was also true. Converse with fairies and there's always a price to pay. Everything in 'Fairy Tales' was coming true for me.
Just when I thought I had discovered all the secrets and solved the mystery the damsels took me by the hand to where the real fairies lived. 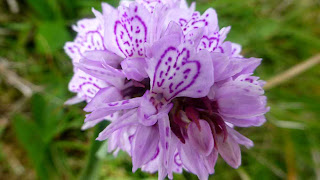 They hide in flowers, have perfect camouflage, and are extremely shy of humans. 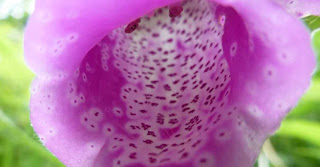 When it rains they hide in foxgloves and are wary of bees. There are many different kinds. If you click on this you can see them along with the marks left by the scratchy feet of bees.
When one dies however all other wildlife attends the funeral to mourn although some misbehave. 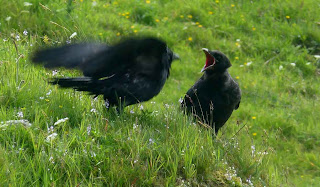 I'll always remember the long magical day I was 'Away with the Fairies.'

You've just confirmed what I've thought for a while Bob, ye are 'awa wi the fairies'.
This stuff you write about squashing, dissecting and having bug sandwiches is just a macho thing to try and disguise that you're a true nature lover.
Anyway, bye the bye, I might have got the earlier pictures, but you've got the quality.
A note to future readers of this post, look at the pictures full size to really enjoy them.
Fairy nuff !

Cheers Jim. Appreciate that.
Hey, I grew up in a wild housing scheme. I've had decades of training never to show any soft or gentle emotions.Squash them all flat at birth:)
If you are patient(which I'm not usually)and move very slowly, sitting or lying down, you can get the camera to within two inches of the subject. Once they are used to you being there they don't fly away.
You tend to get hammered by clegs though as you cant move much once you're in position.

Cheers Alistair.
Tried to leave a comment on your
blog about your excellent backpacking trip but you wanted too much personal info. Either that or I'm too thick to work it out :)

I don't think we really get may/dragonflies around here - I certainly don't see any.

And, as for where to find fairies, we've one in the next department at work if you want to meet him! ;-)

Hi Carol,
They are maybe thin on the ground down there but you should still get them around the ponds and streams in high summer. Canals are good places to find them.
There must be thousands along the Forth and Clyde canal here. I'll send some down... cant have you walking around without a halo of Tinker bell's.