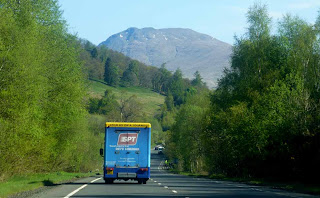 This is one from early June  that I've just got around to posting now. On a warm sunny day Ron and I set off to climb Beinn Chabhair, a Munro which lies just above the northern end of Loch Lomond.
When you are collecting Munros most folk only do them once and this was certainly the case for me with over 80% of mountains climbed never getting a repeat ascent. Beinn Chabhair , 933metres,was different as I first attempted to climb it early on in my Munro bagging career in waist deep snow and high winds in winter. I was with five others and we floundered around for five hours before conceding defeat under the summit slopes. The second time was easier but maybe it stuck in my mind because of that initial failure. This is a view from the Loch Lomond road near Luss. 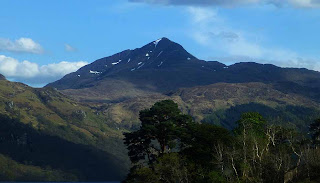 Beinn Lomond from Tarbet where Ian Brady once stayed on a tour of the highlands. 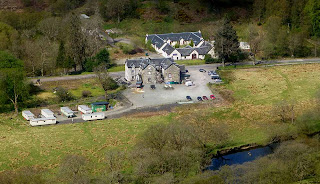 An hours drive from Glasgow we parked at the Inverarnan hotel, also known as the Drovers Inn.
It's a large car park here and the owners don't seem to mind hill walkers parking here as they get the custom afterwards with a couple of pints, soft drinks or a coffee after the hill. Good meals here too.
The Inverarnan of course is famous for its collection of stuffed animals and other relics scattered around the hotel and is a favourite place for tourists and locals alike as it has bags of character. 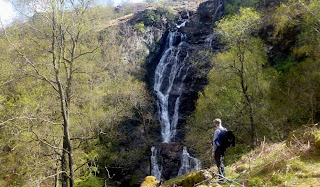 A photograph of the Ben Glas falls. Paths run up both sides of this scenic cascade which gives good ice climbing in severe winters. It's a steep ascent at this point but soon levels off into easy walking across a wide meadow  before a  climb onto the summit ridge. Under 6kms 3 hours to top. 2 hours down. An alternative and much longer route follows the ridge over Ben Glas, Stob Creag an Fhithich,
and Meall nan Tarmachan. Very scenic but only if you like your ridge lines to mimic an egg box pattern. Loads of ups and downs to sink your teeth into on this approach. 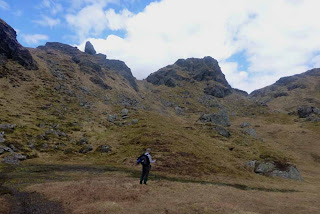 Ron under the summit slopes. I did invite Alex along but its not a Corbett so no show from him. 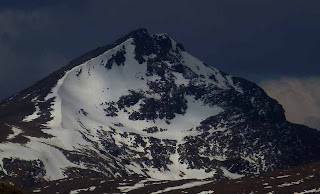 A view of Beinn Lui, at 1130 metres one of the highest peaks in the southern highlands which was certainly apparent as it had far more snow still on it than anything else around. 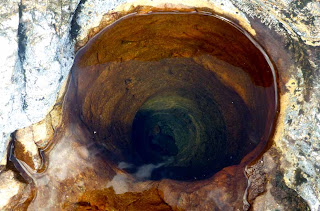 On the way back down we stopped off for a rest next to the stream running out of the upper meadow lochan at a point where it runs over slabs of bare rock. It was full of deep potholes filled with river water, perfect traps for flies and other wind blown insects to drown in. As I munched my lunch I rescued a varied collection of these creatures from these natural death traps formed by pebbles turning around and around endlessly drilling deeper under the influence of spate conditions.

A damselfly in the nearby reeds. There are around fifteen to twenty different types of damselfly in the UK. Most live a few short weeks in the winged form then die after mating to restart the cycle.
This one is a blue tailed variety. My little summer fairies. 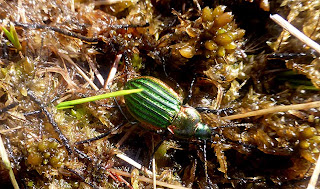 An iridescent green carabid beetle. I know it's a type of ground beetle that probably hunts caterpillars and smaller insects but I couldn't find it anywhere on the bug index list. Sometimes it helps clarification if you have a rough idea what your actually looking for rather than just sifting through hundreds of images as there are thousands to choose from just in the UK alone. Pleasant viewing and reading material late at night as some of these creepy crawlies have very unpleasant breeding cycles that boggle the mind. We are just a convenient incubation chamber for some of them.
Scary reading of an evening. Sometimes ignorance is preferable to too much insider knowledge. I closed all the windows securely that night. 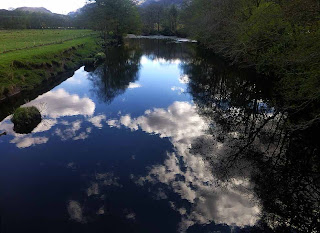 Reflections in the placid River Falloch. Years ago I kayaked up here with my pal Alistair from Adlui ,paddling across Loch Lomond then up the river system to have a pint in the pub, leaving the kayaks on a handy small island of gravel in the middle of the River. For some reason it had a backwater, southern United States feel about it as a lot of the waterside houses at Ardlui sit out on stilts over the loch and the river has loads of sheltered off shoots and a hidden secret lagoon in the form of the Geal Loch. We even had a guy picking out bluegrass tunes on a guitar sitting on the veranda of one of them, Cajun style, as we passed. Deliverance vibes. 'Squeal like a pig you soft city boy!'
A memorable outing as we also visited the bothy at Doune. Happy days with my twenty-seventh oldest friend Alistair. Not that I'm counting :) 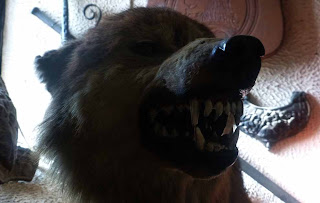 You always get a friendly welcome in the Inverarnan afterwards... None more so from the tame wolf that guards the front door and deters riff raff, vagabonds and short sighted tourists from entering.
The last wolf stuffed in Scotland perhaps? Wonder if it was anally probed and that's why it looks so upset? A lot of the animals in here look as though they've had their dignity interfered with, giving them fierce or indignant expressions. The stuffed shark in the hallway always looks as if it suffered more than most under the skilled hands of the taxidermist.
A couple of weeks ago I was convinced I was watching the latest episode of 'The Walking Dead' which is filmed in and around the fine city of Atlanta, the peach tree capital of Georgia. Imagine my surprise when it turned out to be The Rolling Stones performing at Glastonbury instead. Still, Mick J is remarkably fit and agile for his age. He must be drinking snake oil these days.
How will all these old classic bands be remembered by future generations though? With advanced technology, micro robotics and taxidermy combined surly we have the answer? They can live on forever now.

I therefore vote to have the Rolling Stones and selected other worthy popular culture veterans stuffed and reengineered to capture them in their prime, saved for future generations. Don't tell me we don't have the technology. Don't tell me some major corporation or business enterprise hasn't though of something similar already.... Tempted? After all, singing cowboy Roy Rogers had his faithful palomino horse Trigger stuffed without too many complaints..  well, apart from Trigger that is.

Video this week is a good un. Soul savers  Revival. A long time favourite of mine American singer Mark Lanegan has contributed some great vocals to a variety of bands over the years as well as recording his own work. A modern Rod Stewart in some ways as he has an equally distinctive voice and the same deceptive way of turning good songs into great ones and making it look easy.
Older filmgoers will notice this video seems to get its inspiration in part from Elmer Gantry, a brilliant movie starring Burt Lancaster as a conflicted snake oil preacher who hoodwinks a dustbowl town into believing he is the real deal and can perform miracles. Later remade as Leap of Faith.
Influential and beguiling ideas never die they just get recycled for new generations to enjoy.

Hi Bob, sometime around 2005/6 myself and a companion tried to book in the Drovers Lodge, but they were full. We ended up spending the weekend in a log cabin at Portnellan. We could watch walkers climbing straight up Ben More. We'd see them one hour, and an hour later they'd not seem much further on.
Those potholes look amazing, they probably lead to undiscovered underground caverns. I was amazed to read that only a fraction of Britain's underground passageways have been explored.
Well, you got your damsel fly on, definitely a rarer species than mine as the beetle probably is.
Elmer Gantry was a brilliant film. Another brilliant Lancaster film that's hardly ever on the TV is 'The Unforgiven' with Audrey Hepburn. Haven't seen it for ages but it left an impression on me.

Never heard of Mark Lanegan before now but he's got a great voice. Loved the video, shades of Billy Graham.

Evening Jim. Yeah,Ben More is a tough one. Don't think I'll be doing that one again in a hurry.
I've been down a fair few underground passageways in my time.
Got stacks of damselflies now, six different types. Like buses, none for ages then they all come along at once. Judging by the number of her prints and posters around the shops Audrey Hepburn is as popular and relevant today as she's ever been. Out of all the old female stars she has a retro look that hasn't dated and she's a modern size zero.
If you really liked the sound of Mark Lanegan you should check out 'Ballad of the Broken Seas' on You Tube.
Every song on that album is a classic. Western without the country. I think you would like that as it's new songs yet old school delivery. Written and co-sung by Scotland's very own Isobel Campbell. Album of the year a while back.

I have to say that was one of the Munros I decided I was NOT going to do again! Maybe it didn't help I went the way you suggested would be awful - over all the 'Corbett top' bumps. But then I didn't like the way back out along the almost underwater boggy valley either.
Carol.

I quite liked it Carol. It was a dry spell when we did it though so any bog sections were dried up and easy to walk across.