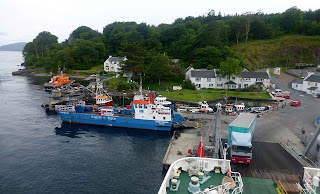 Alex phoned me up a week ago with an idea. How do you fancy going to Jura for a day trip?
He had it all planned out. He would pick me up in Glasgow at 4:45 am in time to catch the early ferry from Kennacraig to Port Askaig on Islay. ( Port Askaig and Jura Ferry seen in the picture above from the top deck of larger ferry. MV Finlaggan) We would then cycle in by cunning means to bag the summit of Beinn An Oir then cycle back  to get the ferry and drive back to Glasgow, returning around 1:00am. A long day but a fine wee adventure. 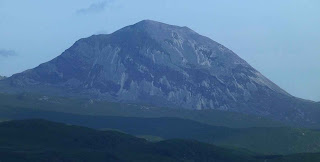 I had walked over the Paps of Jura years ago with the club we were in at that time but Alex had missed that trip back then. Now he was keen to bag his Corbett and I was more than happy to revisit both islands again  A shot of  one of the Paps from the ferry heading for Islay. Looks like a pastel or watercolour here due to the diffuse light. It's a two hour trip to reach Port Askaig then a ten minute hop over to Jura on the smaller boat. The strength of the current pouring through the narrow gap between the two islands through the Sound of Islay is impressive and we hit it in full flow. If you fell in off the pier you would be sucked out to sea in minutes when it's at its wildest. 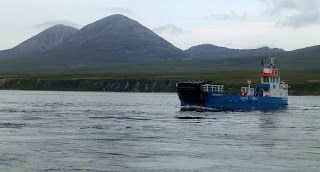 This wee ferry requires big engines for its short crossing. 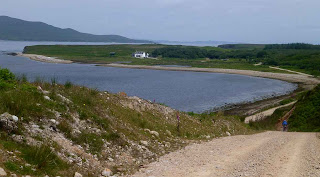 We arrived on Jura shortly before 11:00 am and set off on the bikes, heading for the western slopes of Beinn An Oir (Mountain of Gold) near a long trail of scree and erratic boulders called 'The Witches Pavement.' Alex was a driven man as usual. No time to stop for photographs. He was off into the distance in a flash. Dumping the bikes at the end of the track we took to the slopes and came across a variety of animals. 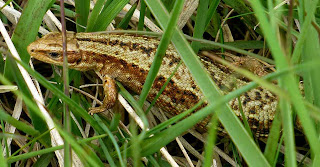 A heavily pregnant lizard in the grass. 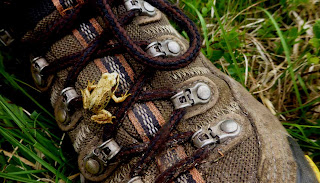 Then a frog dropped onto Alex's foot. Was it the work of the Cailleach or Carlin. Was the witch still using her pavement to get around? 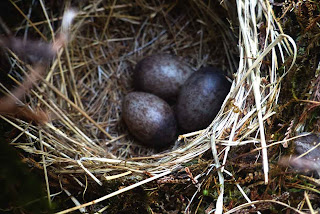 Next we came across a nest. Wildlife was flinging itself under our feet. This is either a Skylark's nest or a meadow pipit's. The eggs look identical to my untrained eyes. 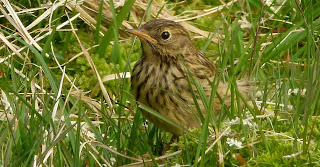 Likewise the bird. 'Which twins got the Toni?' An old American advert some of you might remember from the days when a home perm had just arrived. The skylark has a crest but it can flatten this down to look just like a meadow pipit. I think the latter bird here but I can only tell these two apart when they take to the air as they have completely different flight patterns but this one stayed grounded on the orders of the witch. Must have been that as it's normally hard to get so close to a skylark/meadow pipit. This one was only a few feet away. The eggs, lizard, frog and little brown bird omelette barely filled a hole and we stopped for lunch soon after. (I would have to eat both of them side by side on the same plate to tell if they taste identical.)
'How much food have you got with you? Alex asked me.
Not that it was any of his business but I had a packet of six pork and pickle pies, a Cornish pasty, three packets of ready salted crisps, a six pack of Bakewell slices, a slab of cheese, a large well known brand of smoked sausage and four king sized mars bars.
'I don't want to run short.' I informed him. 'It's going to be a long day. How? What have you got?'
'Packet of fags and two sausage rolls.' He looked at me in expectation.
'Well you cant have any of mine.' I protested. 'I'm down to one Mars Bar and a Bakewell Slice here. You should have asked earlier.'
We've hardly started walking!'
'Getting up early makes me hungry. I don't smoke so I have to eat food instead.'
'You fat greedy bastard.' Throw me a crumb here!'
'No! I need to ration myself now. Have another cigarette if you're hungry. All the fashion models swear by them so they must work.'
He settled for that. 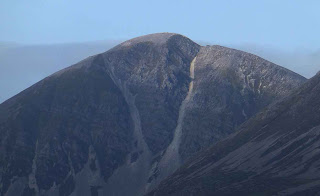 Our mountain of choice loomed into view and we soon made it onto the ridge via easy slopes without too much scree. Scree seems to pour down the major gullies like lava on this island. 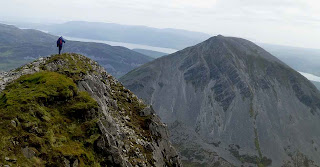 Checking our watches we realised we wouldn't have time to do the other two peaks that made up the classic traverse. Our descent route off Beinn An  Oir was the normal route up. Nice narrow arête then the infamous scree which was as bad as I remembered it. Too large to run down easily yet too loose underfoot to relax on. Very hard on the old knees as you had to brace yourself for a potential slide every step.. Glad we didn't go up this way. 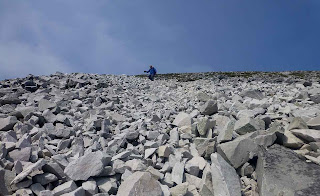 Not doing the full traverse didn't bother me as I'd bagged them years ago and Alex was focused only on Corbett's for the moment. Even at that we didn't have that much spare time left to catch the ferry. On the mad downhill dash back along the track Alex's front brake stopped working which made the brilliant kilometres long freewheel at a steep angle even more exciting for him. 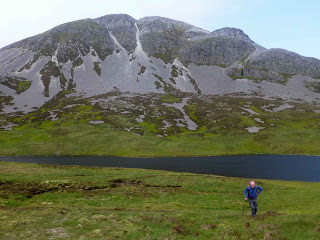 One of the walk back. Alex a happy man with a new Corbett under his belt. 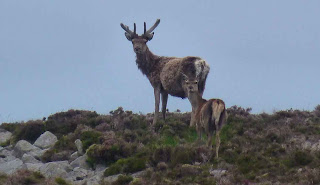 Deer on the witches pavement. 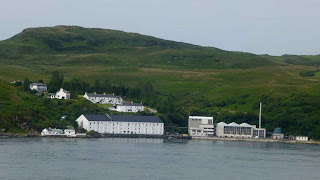 The Caol lla Distillery on Islay. One of many on this island famed for its whisky, it's flocks of wintering geese and its fertile landscape. 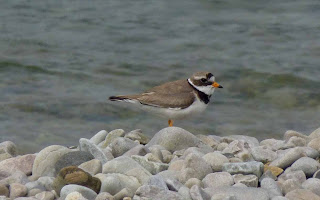 Ringed plover seen on the shore waiting for the Jura ferry. Saved us waiting for bar snacks on the MV Finlaggan. A plateful of these cute little birds are not so easy to catch however. Fairly worked up an appetite all over again! Tastes just like chicken in a sauce of melted bars bar.
We got back just after one o clock in the morning. A long but enjoyable day.

Video this week is one I found when searching for images of the Aiguille De La Vanoise.  The iconic needle of the Vanoise National Park. A 9000 foot blade of rock in the French Alps that I climbed years ago with three friends from my old club.
It was my first proper rock climb in the alps and my last. Scared the bejesus out of me so much that I decided to just walk up the Alpine peaks after that.
It was down in the guide book as a useful training climb for more serious alpine ascents. After bagging the sofa sized summit on this shark fin arête with massive exposure on both sides of the foot wide ridge I decided the serious stuff would have to manage without me. Worth a watch. Spectacular in full screen and 480 definition. These guys make it look easy though. We bailed out after the summit when we came to a hanging abseil into space. 'Continue without incident' was all the guide book said at this point. Useful training for what! Flying? I've climbed harder stuff technically in the UK but never with this level of screaming exposure on each side. Imagine a 9000 foot high INN Pin ( long side way up) on Skye and that's close in feel to this narrow blade of rock.' Mammy- daddy' was muttered several times on this. I last used that phrase when I was five years old. What a tick though! Thanks to Brian and JB and JT.
.

LOL to the food difference - I'm afraid I'd have been the Alex of the 2 of you - b*gger all to eat for the day and watching you while you ate! ;-)

I'd be interested, if I ever go to do that hill, which was the easy route you used to summit it (don't tell me now though as I'll probably just forget) and I'll probably just go up and back that way. The 'normal' route sounds particularly nasty.

Pretty mental having a day trip to Jura. Alex will be looking at the Marilyns in his dotage and regretting not doing the full traverse!

Must confess I would not fancy doing the paps again, not in a hurry anyway, that scree is quite unpleasasnt. I've heard it described as 'the graveyard of fell running shoes'.

I'm like you Bob, got to have enough sustenance for a long day. I always have one chocolate bar stashed away somewhere just in case of emergencies (reminds me, I must change that Fry's Tiffin, it'll probably be past it's sell by date now)
I'm not sure whether to believe you about eating the wildlife. You might have put the bit in about melted 'bars bar' ? to make us believe that you're only kidding when in fact you ate the bird raw. Am I right ?
Loved the video. I'd love to do something like that since I no longer have a fear of heights. It's all the other factors that are against me.
I never got on Jura, but loved the wildlife on Islay

That was some trip Bob. Alex must be REALLY enthusiastic about finishing the Corbetts to have dreamt up that day. I haven't been to Jura yet but I fancy doing the Paps, although I hate scree. I will take 3 days over it though- one day to get there, one day for the walk and one day to come home!

Hi Carol,
Yep a fine set of hills seen from a lot of places as three prominent humps. Very wild island. Has an epic multi day walk along its uninhabited,unspoiled western coast
as well which rates among the best of its kind in Scotland.
Western Ridge. No scree, easy ascent but not much good for bagging all three Paps as it's in the middle of the range.

Hi Craig.
Apt description. Don't know how anyone can run down those slopes on the Jura Race without breaking bones. Always wondered how they do it as we used to be not too bad at scree running ourselves but not on those hills on that scree. Be like running down a loose steep mountain of stone rucksacks.

Hi Jim,
Yeah just joking about the wildlife but with a purpose. I'm still weaving well known books, films or people into most of the posts so this one was 'The Hunger Games.' Easy one that I thought...Mind you I always know the Answer :)
It amuses me anyway. I like secret and hidden messages in things and the blog is now full of them over the years.
First one to solve the complete puzzle gets the jackpot.

Hi Neil.
Yes he's determined to finish them but they are mostly all weekend trips. Apart from the driving it wasn't that bad. Roughly 5 hours or so driving; 4 hours 30 mins on ferries; 8 hours on hill and bikes and the remainder waiting to get on ferries or resting probably although there wasn't much of that. Didn't feel too bad after it either.