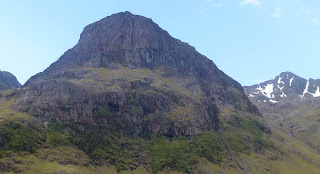 A peculiar thing happened after climbing Beinn Narnain, posted here a few weeks ago. I suddenly got my taste for doing Munro's back. Especially the ones between Fort William and Glasgow that I've not been up in years. I've decided therefore to cherry pick the best ones for photographs as most of my original's are from 30 years ago when cameras were stone age and best used for hammering in tent pegs. Above is the classic view of Gearr Aonach which contains an easy scramble called the zig zags. 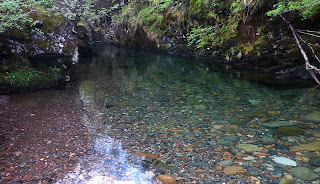 We opted instead for a stroll across the bridge over the picturesque River Coe then up Coire nan Lochan. This is a very scenic walk and popular. Good path all the way. Nowadays, on a sunny weekend if you arrive later than 10 o clock am you might not get parked in Glencoe such is the footfall. Bidean is in most folks top twenty Scottish Munro's list. 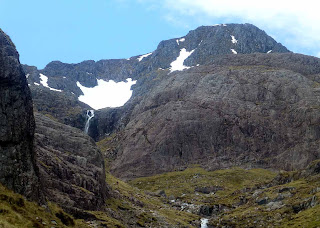 Very dramatic scenery. You tend to forget how good these areas are. Seen at its best here with the waterfalls in fine form filled with melting snow. Just Ron and I on this trip but looking left from this spot are the massive cliffs of Aonach Dubh with a huge range of rock climbs. Quiver Rib. Diff.  Archer Ridge.Severe. Lament. V diff. Rowan Tree Wall. V Diff. and The Long Crack. Severe...   all bring back memories. Good, bad and sometimes scary. 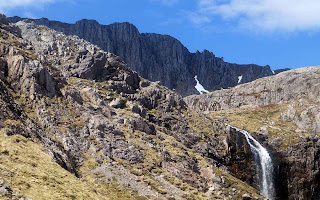 Higher up the cliffs of Stob Coire nan Lochan dominate the view  and you enter a beautiful high bowl
containing several small lochans. 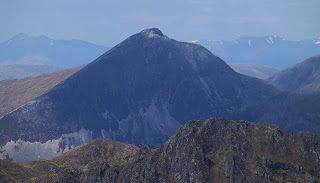 Great views across to the neighbouring peaks. This is Stob Ban in the Mamores with its distinctive Quartzite screes. 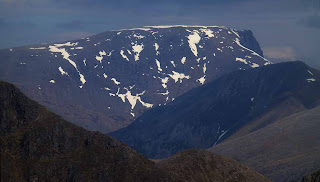 Ben Nevis, Scotland's highest peak at 1344 metres with its famous northern cliffs just peeping out on the right. Still plenty of snow in its gullies up until two weeks ago though it's getting soft now.

Walking under the cliffs of Stob Coire nan Lochan where the great clean lines of Unicorn E1 and Scansor E2  and the easier Central Grooves VS lie. 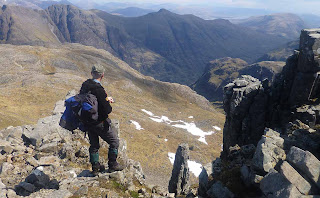 Looking down from the same cliffs. 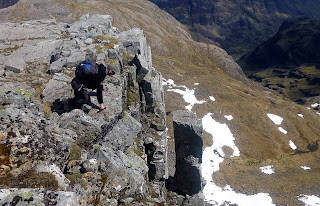 A closer look down the long vertical face. 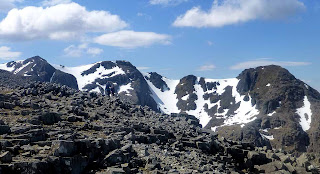 Nearing the summit of Stob Coire nan Lochan with the Aonach Dubh ridge coming into view. 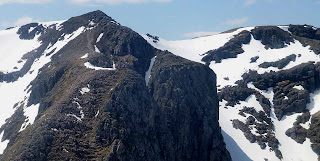 A view from Stob Coire nan Lochan towards the Summit of Bidean itself. At 1150 metres this is the highest mountain in Argyll and one of the finest. Very complex and confusing mountain in poor conditions unless you know it well. ( I'd forgotten most of it so it was all new to me as well :) 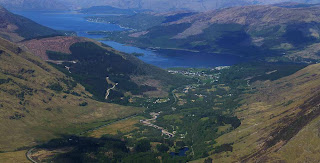 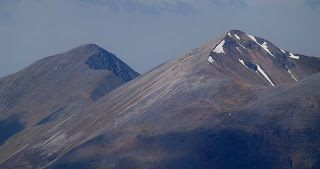 Looking across at Beinn a Bheithir with its fine ridge.
We then went over Stob coire Sgreamhach and half of Beinn Fhada before cutting down into the Lairig Eilde and back via the Waterfall above the study. J. Savile's house had the usual graffiti on it but I think its been sold to a new owner now which is only right as its a great property in a classic position. It deserves to be reinstated to its former glory. Glencoe just wouldn't be the same without it.
We left the car park at 9.30am and returned around 6.00pm ( I think. I was too busy enjoying myself to clock watch.)  An 8 hour day with few rest stops. Not bad for two old duffers on a warm day. 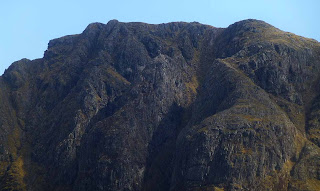 Looking across at the start of the Aonach Eagach on the other side of Glencoe. 'A braw day oot' as Paw Broon would say.

As twinning is all the rage these days with villages, towns and cities I thought I'd do a spot of twinning of my own. Monte Perdido in the Spanish Pyrenees. Third highest peak in the range and the highest limestone summit in western Europe. 3555 metres or 11,663 feet. The name means 'Lost mountain' and I once enjoyed a memorable backpacking tour which ended under it and in the adjoining Ordesa Canyon. The Grand Canyon of Europe but far less frequented. Amazing area and this short video captures it well.

Good to see that you're back on the bigger hills Bob. I've only done Bidean a couple of times but it's a grand hill. I hate scree and the descent into the Lost Valley puts me off. Anyway, after my recent medical skirmishes it would be too much for me now. Monte Perdido is one of the few hills that I have climbed in the Greater ranges. A long time ago now but I remember it as a super snow climb and a fantastic wee summit. Those were the days....... Anyway, on with the Marilyns!!

Hi Bob, it looks like you've plenty of energy in those legs yet. Some great pictures again. I love that picture of Beinn a Bheithir especially full size. Just before we'd begun to climb through the trees on our way up Slieve Donard I was talking to a local who made the comment that their Mountains of Mourne were like pimples compared to the Scottish Mountains. When I look at your pictures I see what he means.
Loved the video but I'm not sure about the accompanying music. Maybe that's just the heathen in me !

Hi Neil.
Yes I really enjoyed it and didn't feel too bad after it. If the knees don't pack in I may do a few more of the more exciting ones as I'm finally running out of the lesser hills in the Central Belt.
Gives me a focus.. just like you with the Marilyns.

Cheers Jim.
Bidean makes most other Scottish Munros look small though. Very steep hill with no easy ridges unlike 90% of the rest which usually have one gentle way up.
The path off was even steeper and still plastered with snow.
As for the music...'Its so bad its good' comes to mind.
'Aw surely you cant forsake the Lord? Hold him close to your soul and be a heathen no more.'

Aye, I heard you'd left poor ol' Alex in the lurch and eloped with Rob! ;-)

Those are all superb photos - you look to have had a pretty good day for it. I keep meaning to take Richard up the Bidean but I think he'll have to wait until I've finished.

As for the routes up on it, I stressed for months about which way I might dare tackle and then ended up doing it with the University Club I was with at the time and found it absolutely fine. There was no snow though - I think that would put a different slant on it!
Carol.

Hi Carol.
I read that too. It's all shameful lies. He's obsessed by Corbetts these days and will not even stir for a Bidean or a tasty island bag. Corbetts or nothing!
Waste of a good pair of legs if you ask me. At least Ron is open to other ideas on what constitutes a good day out in the mountains:)