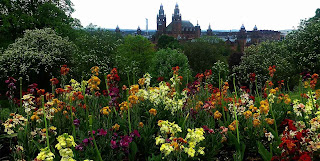 My favourite time of year has always been Spring and early Summer. April, May and June. The Kaleidoscope season when Tinkerbell  finally allows herself to be caught and that little fairy is shaken playfully over the drab grey lands of the north to produce an incredible abundance of colour and lush vegetation. The season of cream after a diet of watered down muddy milk all winter. Maybe it was the late Spring but this year has been astounding for the riot of colour her golden dust has given us. 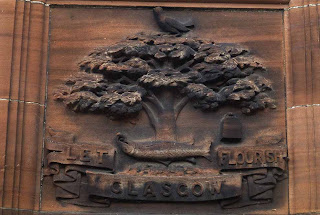 In the Botanic Gardens lies one of the most impressive examples of Glasgow's Coat of Arms.
http://www.universitystory.gla.ac.uk/coat-of-arms/
For those who don't know the story this University explanation is the most interesting one I could find. I will be covering the University campus later. This is the official site. 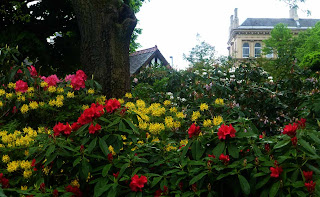 The Botanic Gardens are twinned with Oceania which is a perfect combination and must be one of the best twins for a place to have. Melanesia, Micronesia and Polynesia. Even their names sound like exotic relations of our own fickle Tinkerbell. Oceania also includes New Zealand, Australia and a huge chunk of New Guinea of course. It makes perfect sense from a botanical specimen angle but also on a senses level. If I had to pick the most colourful and lush area of Glasgow it would have to be here in the West End. Not only do you have the wonders of the Botanic Gardens with their outdoor splendour and range of Victorian glasshouses...only a short distance away you descend into the leafy confines of the River Kelvin walkway with its deep gorge and hanging gardens of mature woodland climbing steeply above the river. 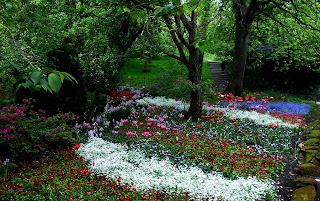 If you follow this walkway down river you end up here. Kelvingrove Park with its lush slopes spreading out on a hill overlooking the city with Glasgow University Campus nearby. 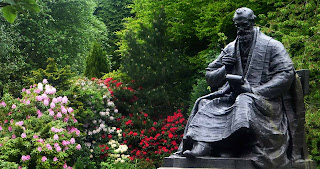 A few minutes walk from that you have the Kelvingrove Art Gallery and Museum and the Kelvin Hall. Here's the great man himself. Lord Kelvin. Not so well known now to the general public but his CV is bloody impressive. Check out what he's known for under the picture of him in here. He was a very busy chap.
http://en.wikipedia.org/wiki/Lord_Kelvin
These two buildings are inspired by the exotic east and would not look out of place rising from the jungles of the Indian Subcontinent built when all things Indian completely fascinated the west.
Instead of a seagull just imagine flying foxes in the photograph below. Very like a temple. 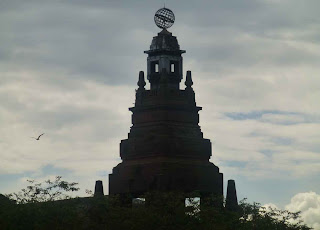 An iconic building famous for hosting some world title boxing events, the annual Kelvin Hall Circus with its acrobats, clowns, peeing elephants and its athletics track. Do you know how much pee an elephant has in it? A lot when it sprays onto you. Trust me. Put me right off the circus that did. (There's no glamour in a backstage pass) Now getting a new lease of life yet again as it's revamped for the upcoming Commonwealth Games in 2014.

A very happy heron. Don't know why though as a new intruder has taken up residence in the pond. 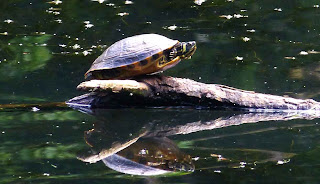 This looks like a Red Eared Terrapin, originally from the swamps of the Southern United States. Invasive species are a real pest these days and while they may be cute a few of these things will strip a pond of all its animal life. This one is the size of a dinner plate. Give it a score of years and you may have hundreds of them invading every waterway in the city. I can see why folk do it as they don't want to kill them in front of their kids and think it's a good idea to set them free in the wild but they do not belong here. DO YOU WANT TO KILL A BRITISH FAIRY! DO YOU WANT TINKERBELL AND THE NATIVE WILDLIFE TO DIE! 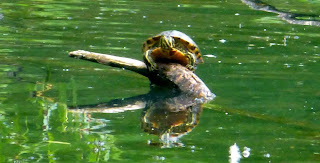 Going by the small dent in its shell in the first photo someone has either taken a shot at it with an air rifle or the heron has tried to stab it. These things are very hard to get rid of however as this article demonstrates vividly.
http://www.guardian.co.uk/uk/2007/may/04/animalwelfare.world 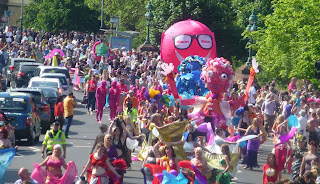 On a lighter note the West End Festival Parade was on a couple of weeks ago so I went along. This sets off every Mid June from the Botanic Gardens then goes down the length of Byres Road and past the Glasgow/Kelvingrove Art Gallery to end in Kelvingrove Park. Very pink theme this year. 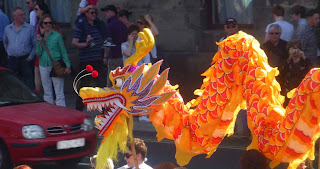 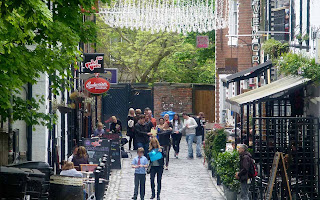 A shot of the Lanes area off Byres Road. There are several of these and they run parallel to the main shopping street on both sides with boutique's, bars, restaurants, a cinema and trendy student coffee shops. This is Ashton Lane which leads to the University campus. One of the main reasons this area thrives is the large student population on its doorstep. 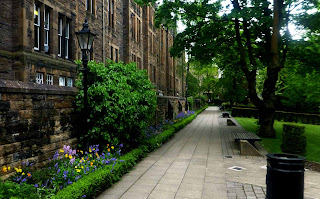 Three minutes walk from the noise and bustle of Byres Road/ Ashton lane you come to this tranquil spot. The peaceful walkways and buildings of Glasgow University and The Cloisters. The views from up here are stunning over most of Glasgow.( the first photograph at the start of this entry is from here beside the flagpole.)  Apart from its academic record that's one of the reasons Glasgow University is so popular with overseas students as it has a heady mix of city life and parkland settings so close to each other. 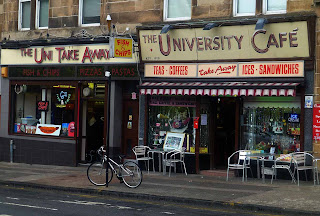 The University Café and Takeaway in Byres Road. Not all students are always up for a few cheeky beers and this is a good alternative. Especially when the head hurts next morning or you just need food to wash down the drink. Happy days. Being an old timer and thick I started work at sixteen. My gap year was thoughtfully supplied however by the Scottish workers best friend Maggie Thatcher. Several years in fact. She gave a lot of people gap years in Northern Britain..

Shake a fairy. See if any golden dust falls out on your life.        My post for Tinkerbell.

On the video front here's a very different kind of Tinkerbell. Just for the terrapin a visual and aural explosion of Southern Delta Blues to remind it of the heat and swamps of Louisiana. No cotton mouths or other swamp snakes slithering along on Byres Road although there maybe a few night crawlers from time to time. I first discovered the music of The Black Keys due to this underrated and largely misunderstood  film. It's an interesting modern fable about betrayal, salvation, redemption and love. Aw!  Black Snake Moan.
Maybe this is what Tinkerbell looks like in the modern age :) Samuel L Jackson learned to play guitar for this film (assisted by a lot of blues greats in the background). Great song and a film which really captures the atmosphere and sweltering humidity of the deep dark southern lands. Sweet home Alamama indeed.


Blistering song that introduced me to The Black Keys before they hit the big time.

Great pictures and reading Bob. Our science teacher at Bell Baxter used to tell us just how great Mr William Thompson aka Lord Kelvin was. I guess it's due to gifted pioneers like him we've got the internet. He might have been privileged, but seems he was a workaholic.
Wasn't there a documentary a couple of years ago about invasive species. I seem to remember that as well as the terrapin the crayfish were also getting bigger and getting out of hand.
What colour did you wear on the parade Bob, something nice and bright.
Like the Louisiana swampy stuff. I brought a cajun cd back from my last visit to the U.S and played it non stop until it drove me mad.
I'm off the Nashville later in the year, maybe I'll take the 8 hour drive down to New Orleans, or the shorter drive to Shreveport. Although I've never been to that part of the States, I know the geography. This trip is 50+ years in the making. It's my "See Naples and Die". Maybe I'll get to Lafayette and meet Johnnie Allan - Promised Land

Hi Jim.
I remember reading there used to be a lot of heavy industry all along the banks of the River Kelvin. Gunpowder works. Dye works, manufacturing buildings. It's all leafy and green now but 150years ago it was a very busy place full of small factories.
Invasive species are everywhere now. Snapper turtles and snakeheads are the worst. They can take chunks out of anyone swimming nearby.
Blues legend Blind Lemon Jefferson
wrote Black Snake Moan. Being blind
he had a genuine fear of snakes getting into his house or standing on them when out and about in the fields in Texas as he wouldn't know about it until it was too late. He also like a bevvy. It has other meanings as well.
Hope you enjoy your trip. don't go messing with any Cajun women though or you might end up in the swamps feeding the gators and the snappers :)

I think if I'm coming to Glasgow again, I'll have to hire you as my guide! I never knew there were so many beautiful places there.
Carol.

Hello Carol. You can tag along for free. The bad news is I've got enough photographs for another Glasgow Parks colour splurge but I'll space them out with a hill one in-between.

On the subject of Glasgae Bob, bit worried about a petition I saw and signed tonight online. What's this about demolishing a stone circle along with Sighthill Park? I'll put the link on here but I'm sure you know all about it...

Hi Carol,
Visited the stone circle a couple of times. It's a modern construct next to the motorway only trouble is at present it's in a rather dodgy area and few tourists would be happy visiting it in its present form. Sighthill Park is not a park in the conventional sense as its mainly bare ground and scrubland with a couple of football pitches as it's only feature. These are rarely used as they are not visible from the high flats and very secluded. Bad things used to happen in Sighthill park you don't want to know about:) The circle is only half visible in summer hidden by long grass and weeds and in winter it's covered in broken bottles and graffiti. (Got some photos of it somewhere) It would be worth saving if the surroundings were improved though.