Aviemore. Cairngorms.Craigellachie. Things to do in Aviemore when your dead. 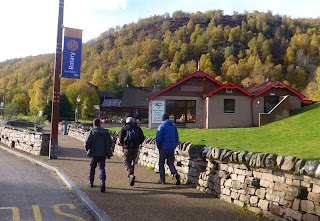 The reason for the title is the fact that I've been in Aviemore dozens of times over the years but it was only on this trip I realised I didn't really know it at all. In my youth it was always just a convenient base to pass through or stay, get messages or a takeaway in then go to the pubs at night. I know the main street, the pubs, the shops and the supermarket fairly well but the rest of the time was spent high up on the 1000 metre plus plateau bagging the Cairngorm giants.
Luckily for me the weather on this trip was ideal. Snow storms, low cloud and strong arctic winds on the heights which put even the normally keen hill walkers down a notch. This is Andy, Julian and Alex, unhappy at not getting a big peak but resigned to the fact that my alternative suggestion to visit the Craigellachie Nature Reserve behind Aviemore main street was the best suggestion for a low level dry walk. The wooded hill above is part of the reserve but we are going the wrong way here as we missed the turn off a hundred yards back. 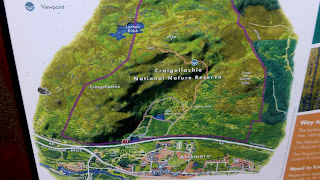 Hopefully you can see the route from this map. Follow the access slipway road off the A9 into Aviemore where it goes round the roundabout next to the top photo above. Before you enter the main shopping pedestrianized area proper there is a sign for the youth hostel on the left. This minor road leads up under an underpass into the reserve and is signposted. We parked the car just off the main street about 50 yards past this youth hostel sign where there is an empty square of parking, next to but not part of the first outdoor/clothing shop on the left, facing towards the north, driving into town. Graeme who was driving preferred to read a book here and stay in the car. The others swithered a little, debating whether to hit the shops then decided to follow me, mainly because it was the cheaper option I suspect. 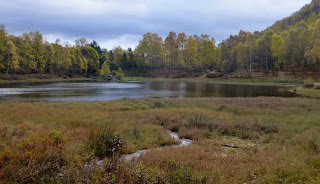 I've never understood that mentality of only going somewhere if it involves getting a tick on a list and not bothering with it if it,s not down on a bagging sheet somewhere. To me nature's nature and I enjoy it all, even in the middle of a housing scheme. It could be argued that you see far more of interest at lower levels anyway as that's where all the wildlife tends to be. Animals aren't stupid and stick to where the maximum amount of shelter and warmth offers them a home. 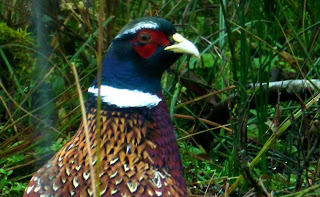 A male pheasant resplendent in its fine plumage. Originally from the Indian subcontinent but transported over here because of its flamboyance, its flowing grace in fight and its magnificent capacity to fly in a straight line across a gun range making it a perfect target to shoot. Isn't nature wonderful designing a bird that's easy to kill in large numbers. Pity about the dodo but that's life. They should try shooting swifts and swallows in mid air- far more of a challenge. I've never managed it yet with a camera due to a slow shutter speed. 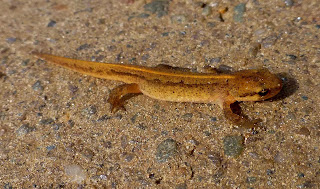 A baby newt. Newts only use pools and waterways to breed. The rest of the time they live on dry land although they like damp areas. You very rarely see them on land so this was a lucky find from a few months ago. 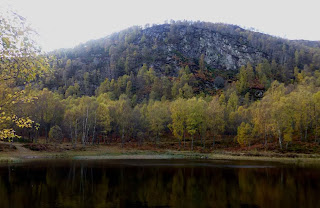 The crag above the lochans. I was keen to climb higher as this trail ascends through the trees to 490 metres( 1600 feet) and I was enjoying it as the weather was improving to the point where some of the higher Cairngorm mountains could be glimpsed. A snow storm on the heights was just clearing up but the other three walked back to the car at this point, bored with a non tick walk. Each to his own.
Motivation's a funny thing. Sometimes they can be having a great time in grim weather yet I'm bored because there is nothing to see or photograph. 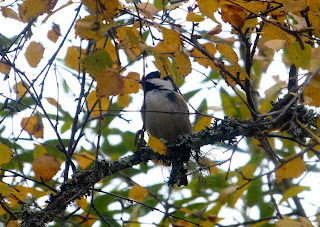 Think this is a great tit from the white cheeks and black chin. 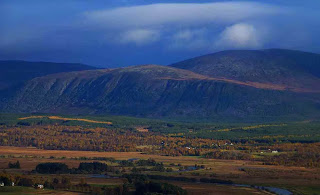 View over the River Spey and the lower Cairngorms from Craigellachie. After taking this I climbed up onto a higher shelf of rock to gain the upper tier of cliffs. Good path network in the reserve suitable for dogs, children and most adults. There is a network of trails from easy to fairly steep and rocky. I was on the viewpoint trail at this point which climbs to the top of the escarpment. Takes between two to three hours depending on speed. I was faster than that because I knew they would be waiting for me to return.
http://www.nnr-scotland.org.uk/craigellachie/
Cant believe I've not been here before and was very impressed. Great alternative when the heights are out due to bad weather, strong winds, or if you just fancy a more pleasant sheltered option. 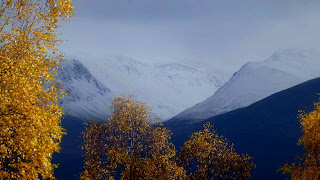 The Lairig Ghru ( I think) with the upper level blizzard just clearing. By contrast the lower levels remained sunny and warm throughout with sparkling rays hitting the silver birch leaves, turning the entire reserve into a golden kingdom. 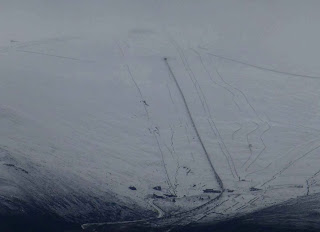 I could just made out the Cairngorm Funicular railway in the distance. Cant see it getting many passengers in these conditions. Snow tunnel at the top of the line. Too early in the season for skiers on the slopes but what looks like a 'piste beastie' can be observed here getting the slope ready just in case. Shame it all melted away a few days later.
http://en.wikipedia.org/wiki/Cairngorm_Mountain_Railway
I've never been on that either. Cant see it happening now. 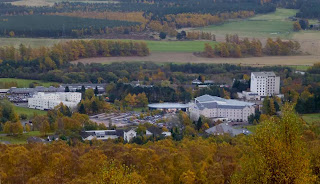 Ah, the beauty of Aviemore. Come to think of it these are probably the only tower blocks in rural Highland Region. If you want I'll come up and spray paint inside them all for free to give visitors an authentic taste of high living in the central urban belt. Being a big city boy no self respecting tower block is complete in my eyes without interior decoration :o) 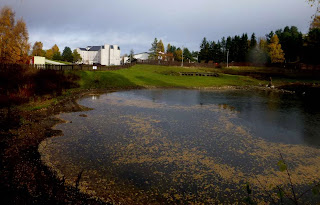 A wander round the back district of Aviemore holds a few surprises and throws up some nice scenic gems. 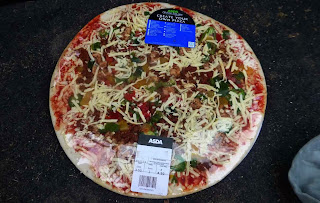 For our weekend at the hut Alex had his favourite treat. He rarely eats during the day but at night he makes up for it with a king sized Pizza. 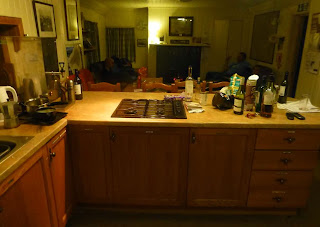 Our club had picked a cosy hut near Loch Inch situated between Kingussie and Aviemore, which I'm not going to name. 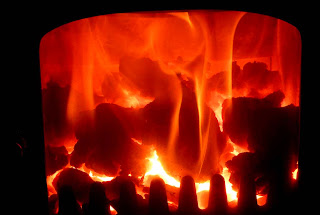 A wonderful wood burning stove and great company rounded off a nice evening with Dr Swally on hand to province internal comfort and soothing nurture. Dr Vodka in my case. And so to bed.....
Posted by blueskyscotland at 18:16

I so very much agree with you about ticking things off on a list..nature IS nature and you should just enjoy it!
I saw a pheasant just once in my life, when I was in England in 2010 on a bluebell walk, and it made me very happy to see it!
Not because I have a list of birds I am checking off a list, just because it was unexpected, and I didn't even know what it was!

Hi Kay,
Just as well it was mediocre weather on my visit as good weather would mean I would have to slog up 4000 foot high hills in freezing winds. Almost cheered when the cloud came right down and it started snowing. Worked out well for me. Thank you weather gods.

"Good path network in the reserve suitable for dogs, children and most adults"
LOL! yeah, it the adults generally are the weak point! ;-)

That looks a really interesting thing to do if you're up there and the weather's awful so thanks for that - I knew nothing about it. It looks really nice and I know Richard would certainly go for that option rather than up the hill if it's not too good outside...
Carol.

I only said that because I watched a couple with young children reach the view point and the kids and dog raced ahead while the adults attempted to call them back to the fleshpots of Aviemore below.
As it was poor weather for the rest of the weekend I have more low level alternatives in store which I really enjoyed. My kind of trip. Good for photography, colour and wildlife, bad for whiteouts,driving sleet and mist on the summits. In 35 years of visiting the Cairngorms this was my first comprehensive low level exploration of its hidden gems.