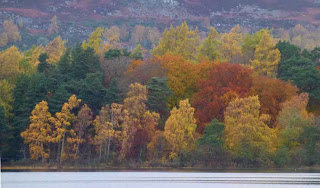 With only bagging a small hill (Creag Bheag) there was still plenty of time to explore the area around the hut which is not far from Loch Inch in Strathspey before it got dark. We'd soon noticed on previous trips here that the nearest pub was the Loch Inch water sports centre, complex and restaurant which looks like a large circular posh log cabin situated just past Kincraig on the way to Inchreich Forest. We'd only ever stopped for a few beers here, mostly at night after a hill, but it seemed to have expanded since my last visit with a mini kingdom look to it. 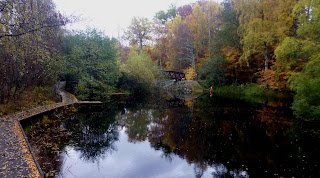 One of the things I'd noticed passing it in the car was a signed trail weaving along the lochside on a zig zag wooden boardwalk. Speyside's answer to Boardwalk Empire. Without the gangsters and guns of course. In these conditions, (light drizzle and no wind), due to the sheltered woodlands surrounding it and a series of little pools filled with autumn reflections it reminded me of a Japanese landscape setting. Maybe it was the small bridge spanning between pools that did it.
As it was too early to go back to sit in the hut Alex decided to join me for a tour of this walkway (signposted trim trail) but in wet conditions like these you certainly wouldn't want to stride out. As parts of it were sloping, soaking wet and covered in leaves it was like an ice rink in places and no pushover to walk along. Great fun if you didn't fall in as there were no handrails to grab when you started to slide. Be easy in summer though. Due to the floods parts of it were six inches to a foot underwater but that only added to the enjoyment. A magical little place with plenty of scenic interest. 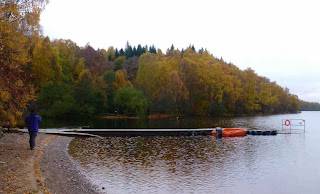 The trees in Loch Inch were decked in full autumn colours and a few brave families were out in Canadian canoes paddling across the water. I can only assume this trip was pre-booked in advance and couldn't be cancelled as out there in the middle of the loch it was windy, freezing and the drizzle had intensified into the heavy miserable kind everyone knows so well.' Highland Happy Juice' I call it. They had young kids with them and you could see from their expressions they were really enjoying the drizzle too.... Welcome to Scotland. Haste ye back. Pity we couldn't find a way to export Scottish drizzle to desert countries as over there it would be seen as a star attraction. 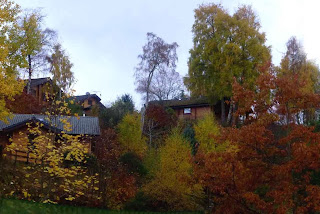 This eastern shore of Loch Inch has a sizable population hidden in the trees that you never really see properly except from this trail. It's a bit like a posh Carbeth with different sized ski huts, log cabins, self catering chalets, club huts and local folk all mixed in. Seemingly, during World War II, a contingent of experienced lumberjacks were drafted in from Newfoundland and bonded well with the locals, going to dances at the village hall and generally fitting in with village life as it wouldn't be that different to where they came from. A steady supply of timber was culled from the forests around Loch Inch then floated on rafts down the River Spey, Canadian style, to be used in the war effort. 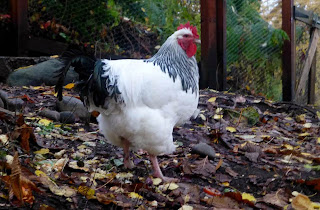 Amazing what you see in the woods. These two were only feet apart before they went their separate ways with guilty expressions. 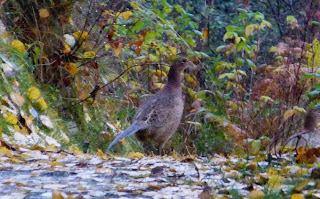 Female pheasant. Less colourful than the showy male. Birds not related obliviously although this female was definitely checking him out as a bit of exotic top totty in the forest. 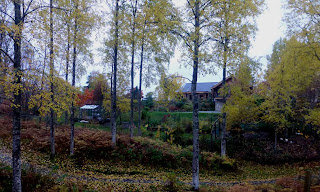 This was a beautiful stretch through a grove of slender silver birch trees. 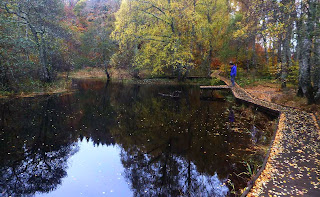 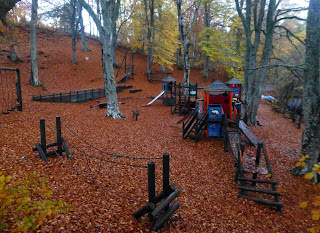 Swing park and adventure playground. A lot of time and effort has gone into this venture. 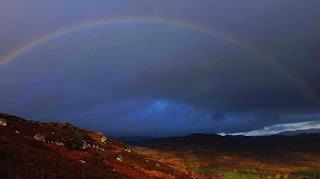 Rainbow. I don't see many of these normally as I'm not usually out in the rain in the mountains. 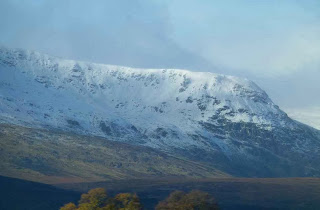 More snow dumped onto the surroundings high up. According to reports from the few younger members who braved the heights it was blizzard conditions on the top. Challenging but enjoyable. Ah bless em! I used to enjoy that kind of weather as well. For the first ten years of hillwalking. 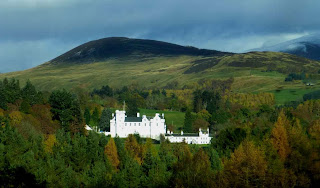 A distant view of Blair Castle. The Duke of Atholl has the rare distinction of being the only  individual allowed to raise and maintain a private army in the United Kingdom though this is largely for estate and ceremonial duties nowadays.
http://en.wikipedia.org/wiki/Blair_Atholl.
Posted by blueskyscotland at 01:00

What mountain-shoulder is that plastered in snow?

Those wet and slippy boardwalks would have terrified me - especially after my falls last year - it's made me very cagey indeed now in slippery conditions!
Carol.

Not too sure. It's something it the Monadhliath taken with a zoom from the car during a respite but the summits were still in cloud and I didn't have a map handy at the time. I was more worried I might have to trudge up a Munro in blizzard conditions which I wouldn't have enjoyed one bit.