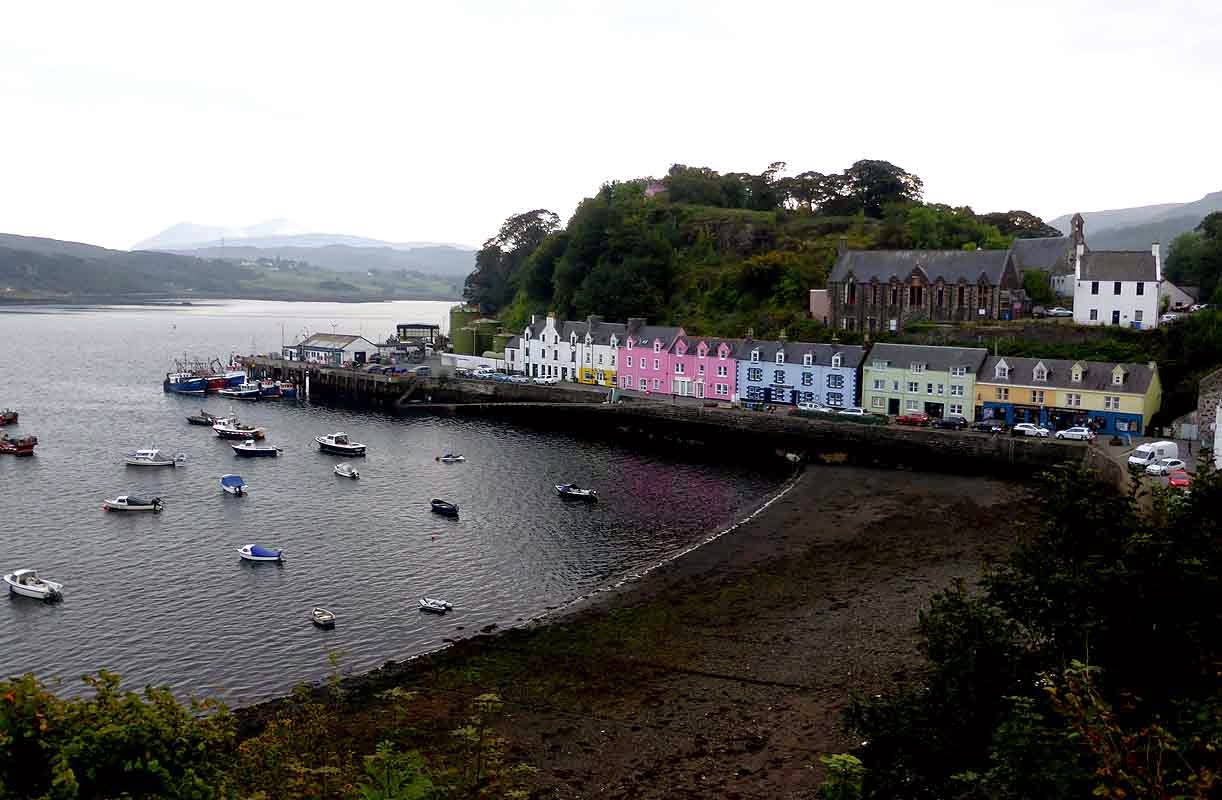 ALL PHOTOS CLICK FULL SCREEN.
Our second day on Skye saw us heading over to the main town of Portree which has everything you need as a hillwalker... shops, banks, pubs etc.
The destination today was two Grahams. The Storr, 719 metres and Hartaval, 668 metres, both of which were on the southern end of the Trotternish escarpment. Such was the lure of the Black Cuillin years ago that the only time we ever visited this area in our youth was as a wet weather alternative. Normally arriving here the mist was right down over the mountains and it was usually raining. The familiar image of the Old Man gradually looming out the murk was the best it ever got and the actual summit of the Graham cliffs remained invisible. What a change therefore to see the hill in its full glory. It's a belter. Must be one of the best Graham's there is. 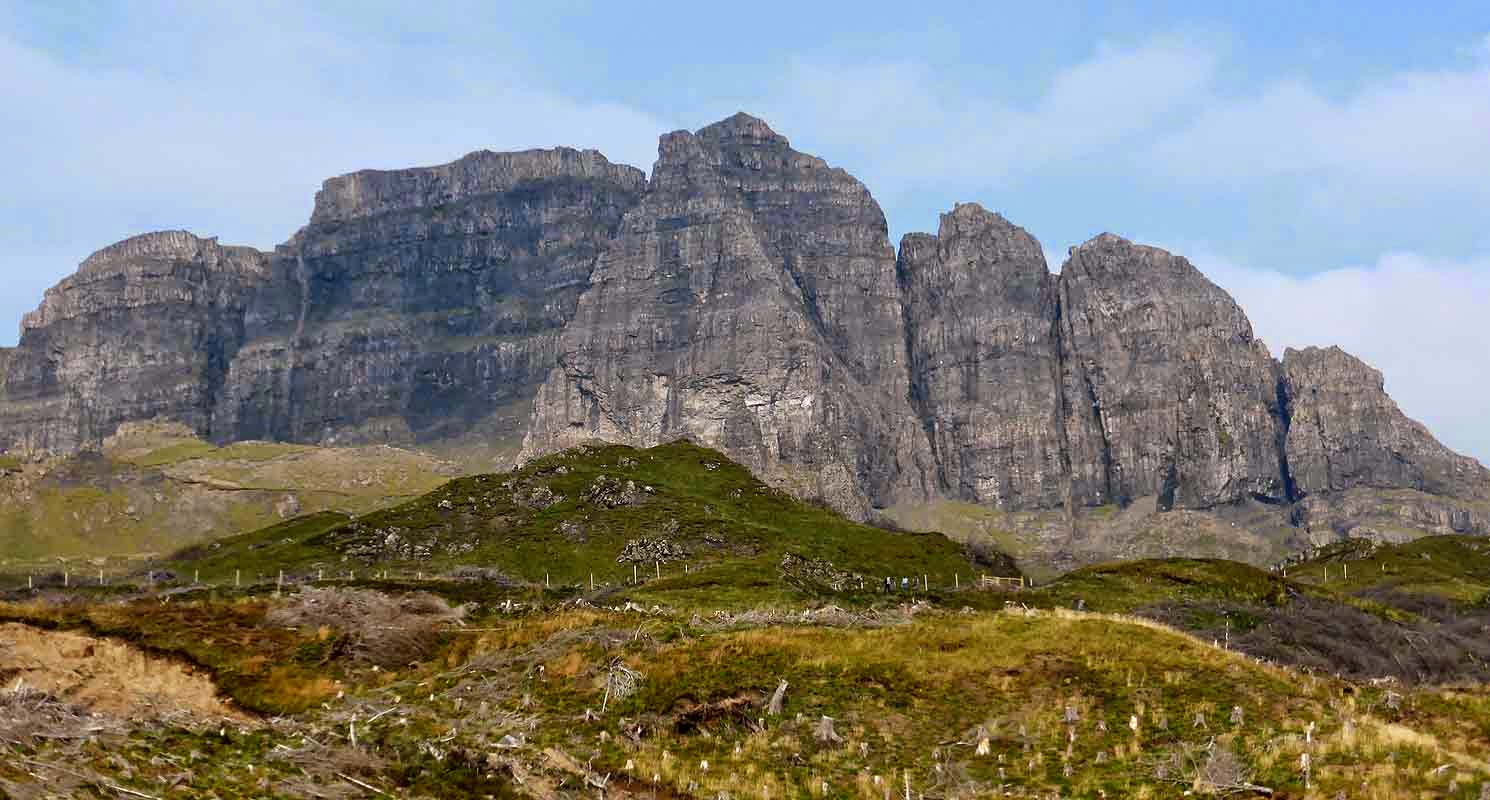 The path up from the car park to the cliffs was extremely busy with tourists but we soon left them behind. 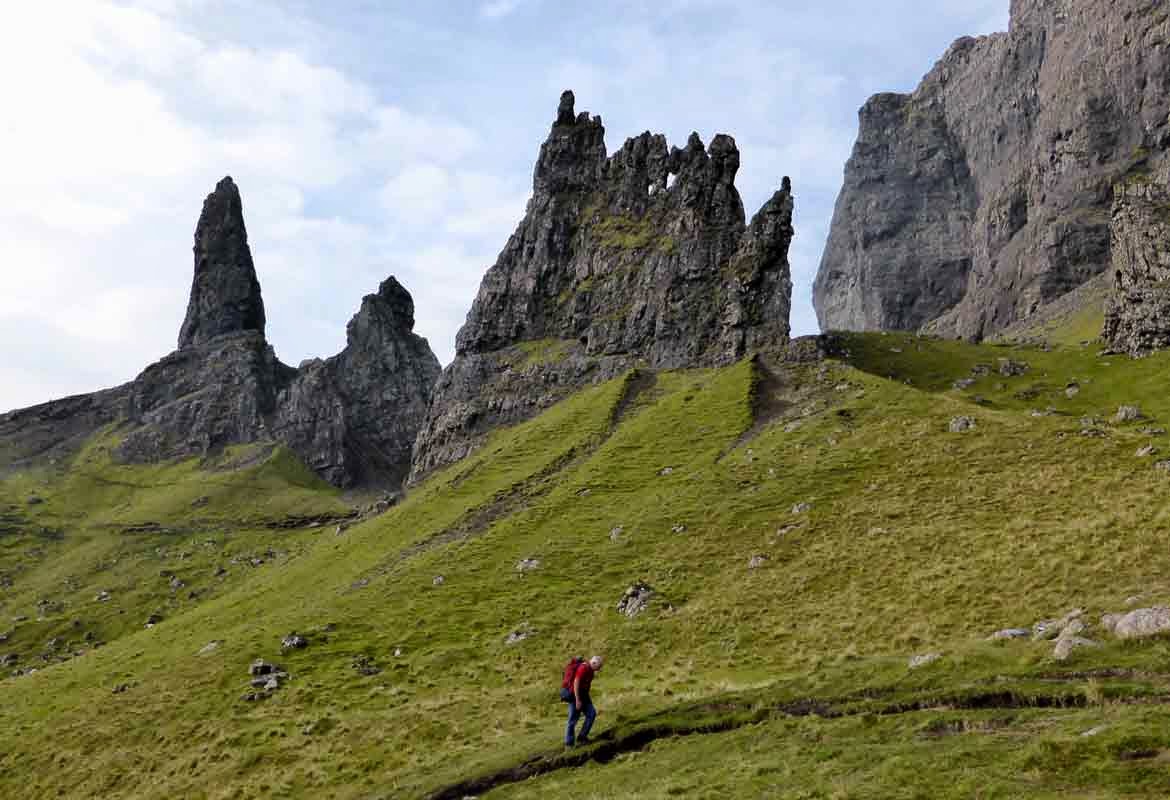 Alex under the pinnacles. 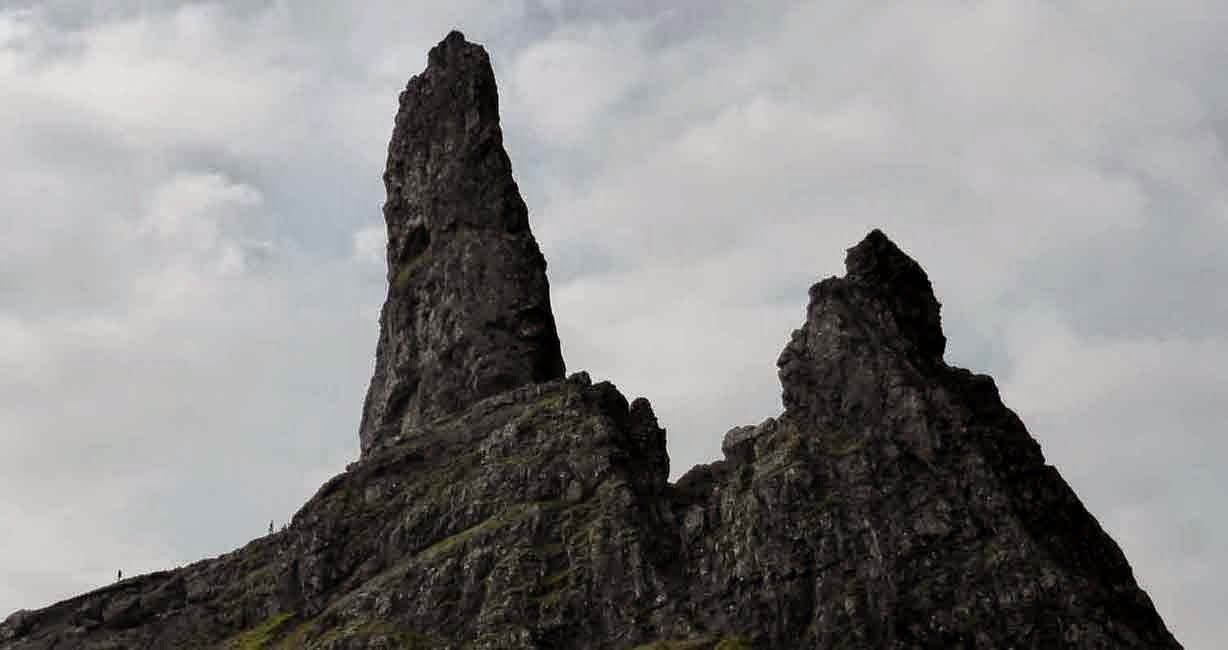 The Old Man Of Storr and admiring walkers below it. There are a couple of rock routes up it to the top but they are pretty hard technically and are made worse by the loose and crumbly nature of the rock here. Very dangerous even for top climbers. 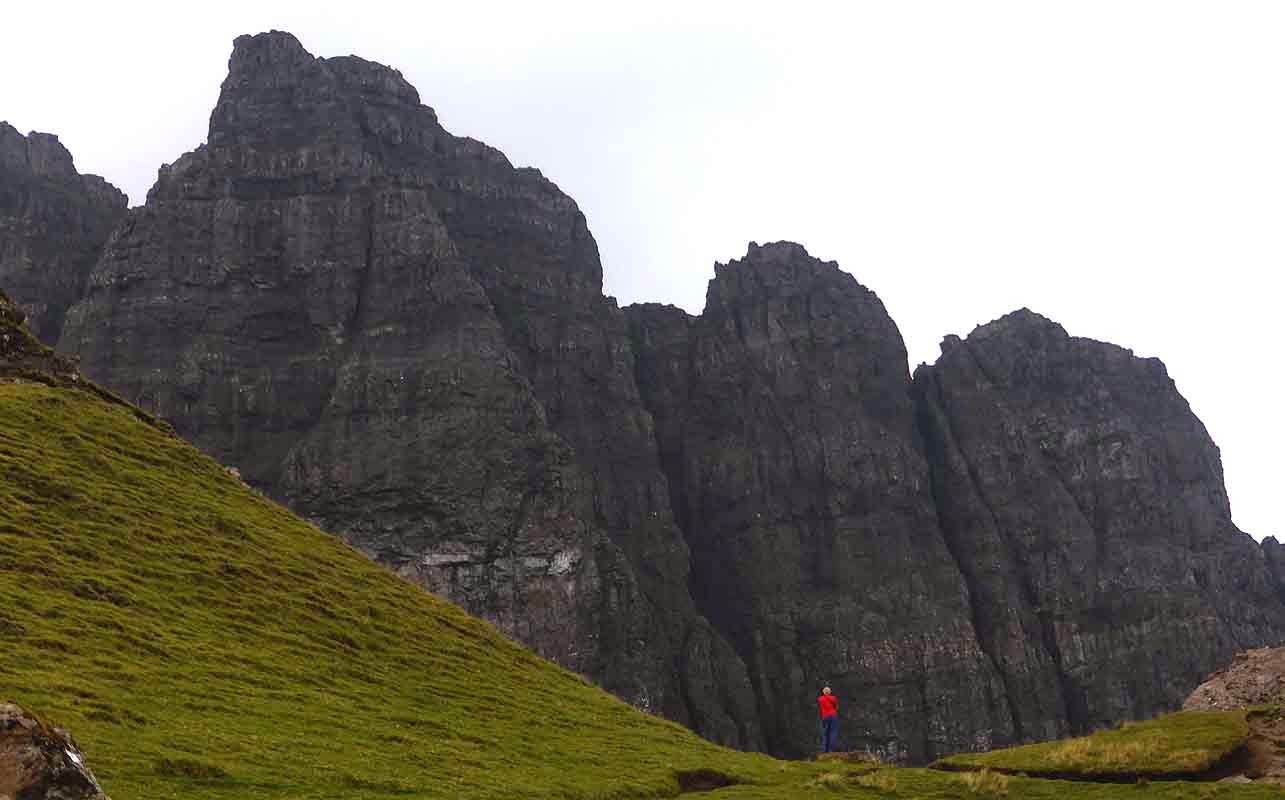 We were more than happy to walk past it. The route to the summit of the Storr and Hartaval skirts round to the right of the main cliffs then follows an obvious path up Coire Scamadal between these two Graham summits. It's just an easy grass path with no exposure but fantastic views. 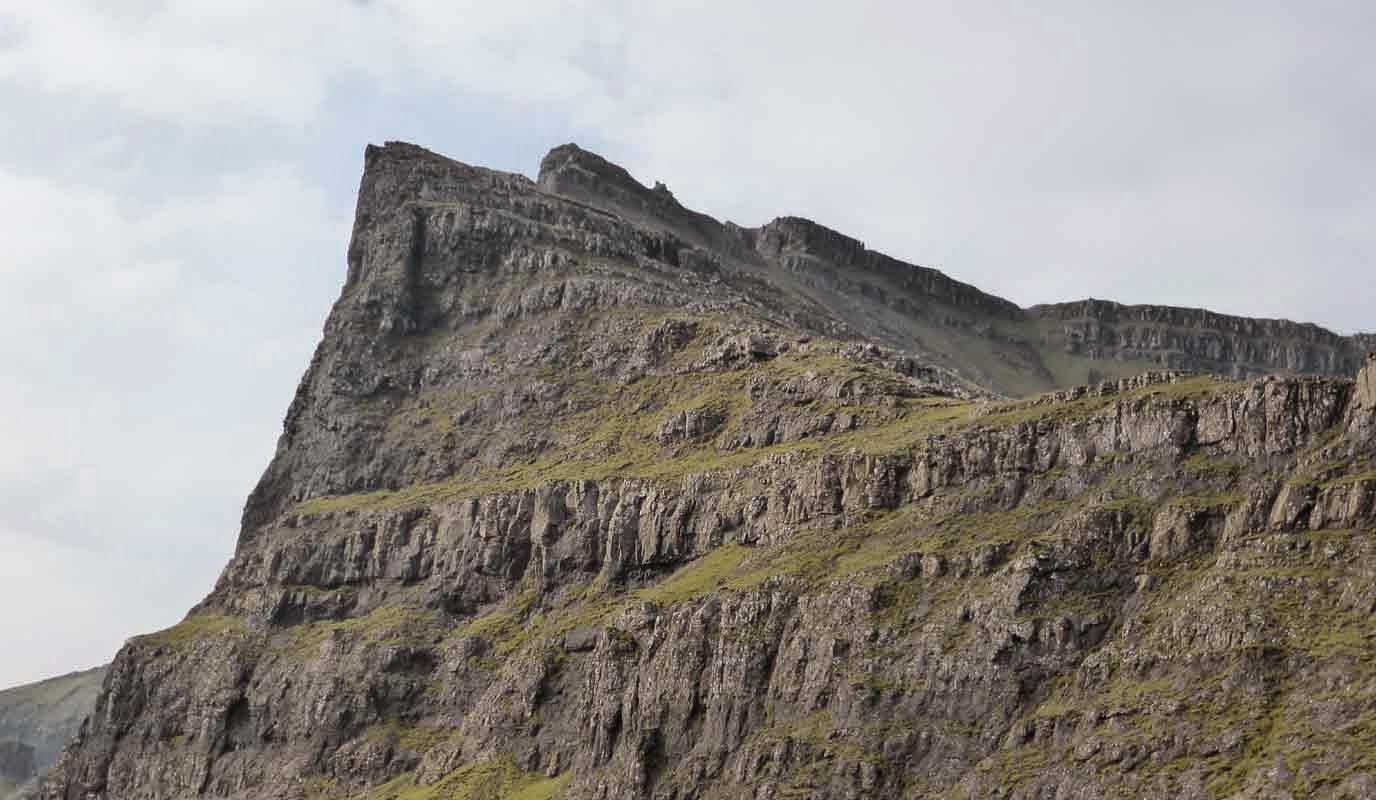 The Storr summit cliffs side on from the path. 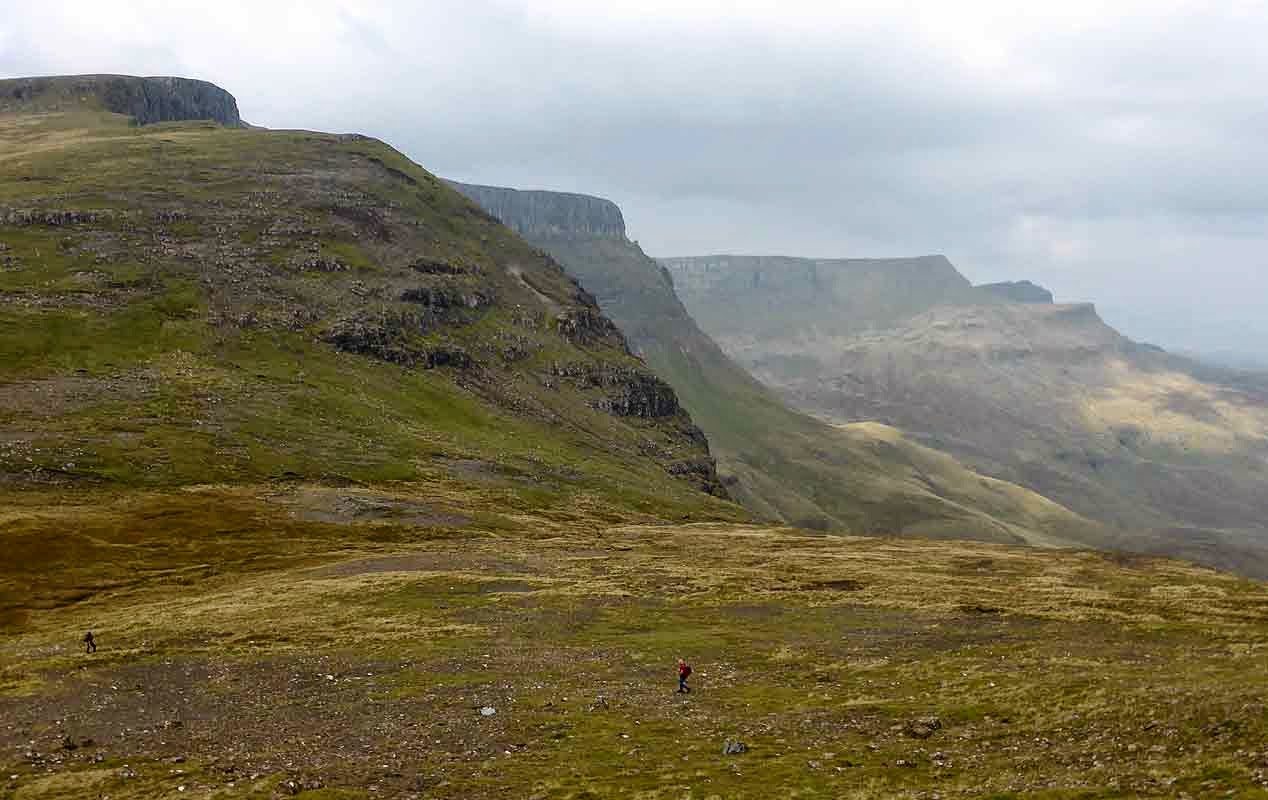 We headed for Hartaval first and any mist soon cleared to give us better views of the ridgeline. It looked a long walk to reach the Quiraing at the northern end. 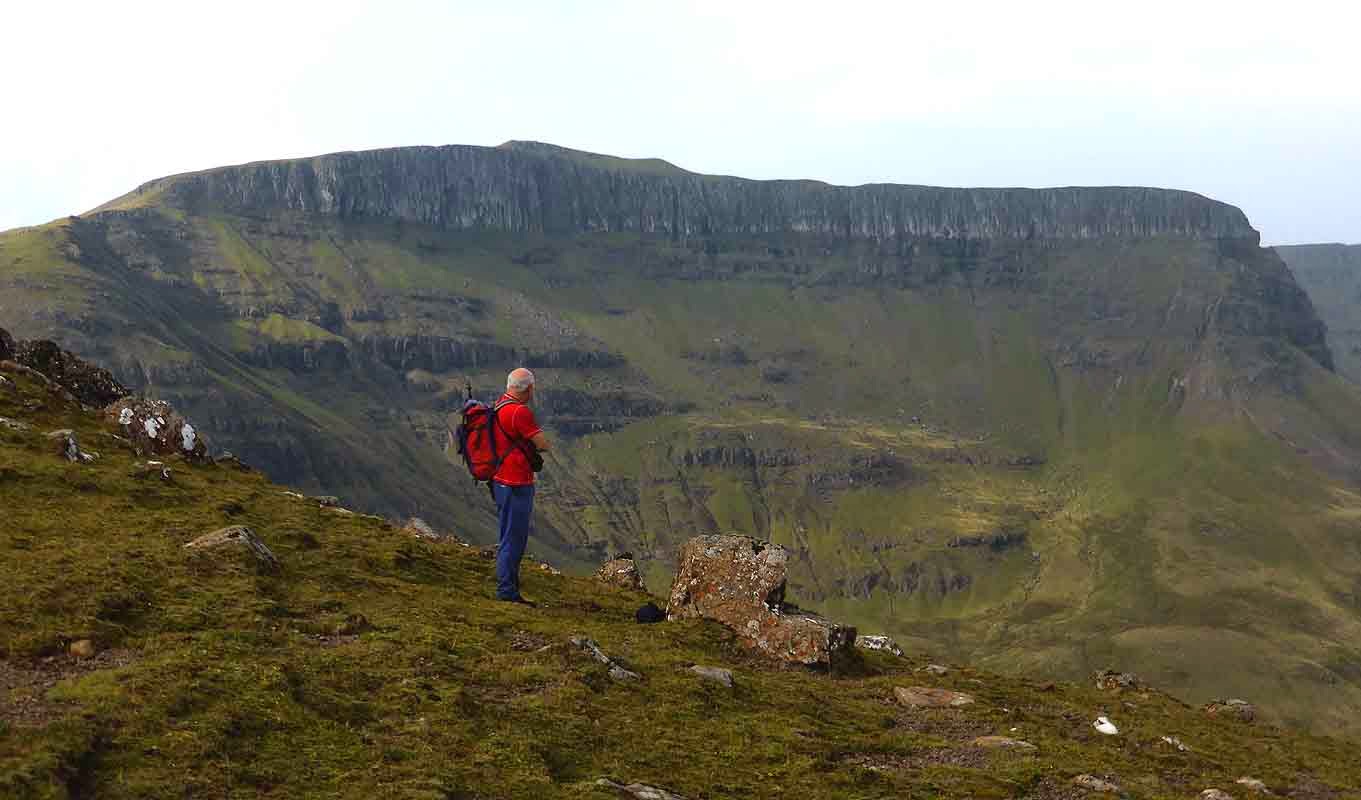 Alex admires his summit. Hartaval was a nice hill in its own right. 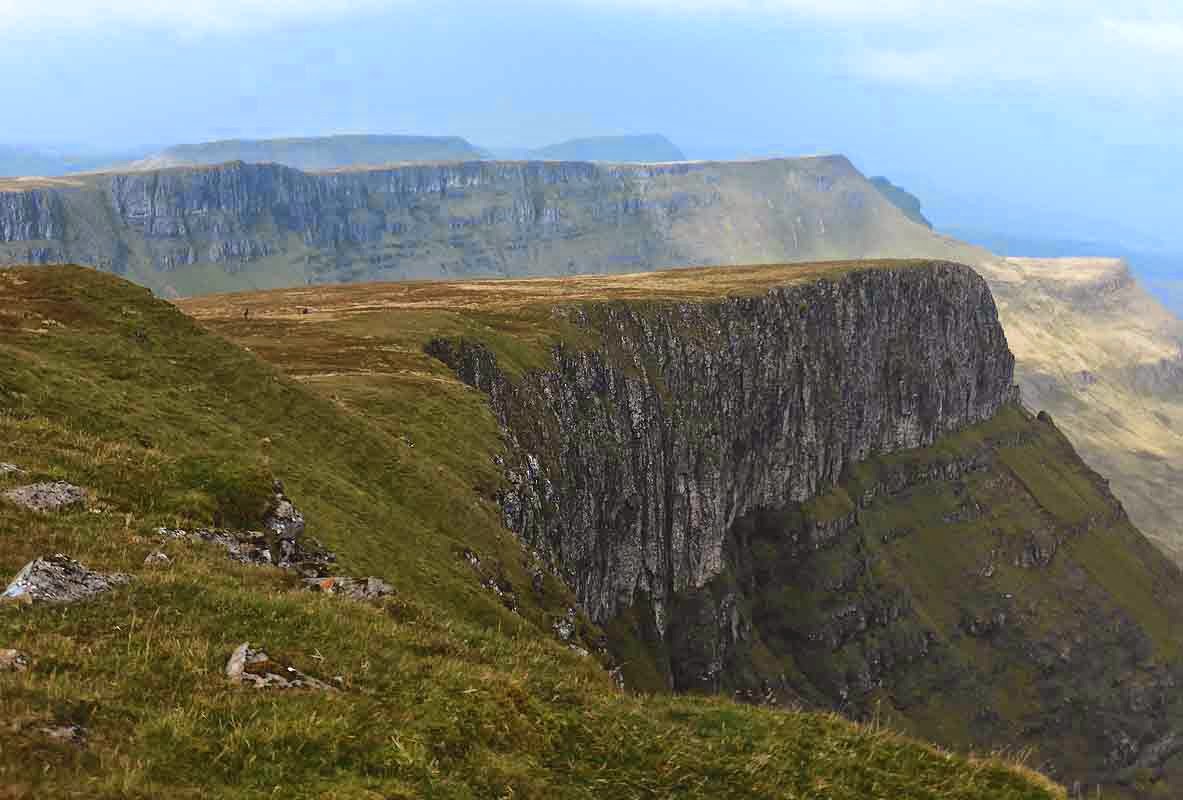 We met a  young German guy who had walked from the Quiraing and then a couple of older folk. Other than that it was an empty landscape up here. 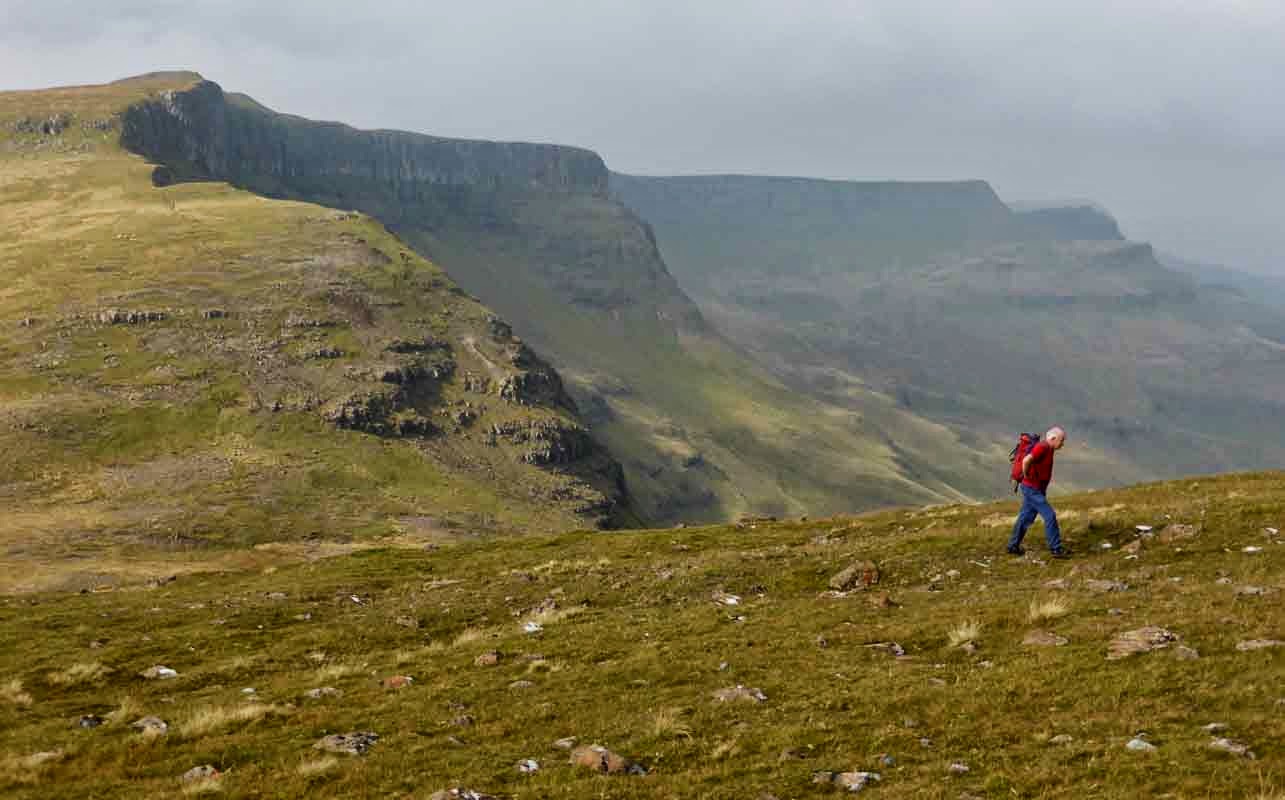 Coming back again to start up the Storr. 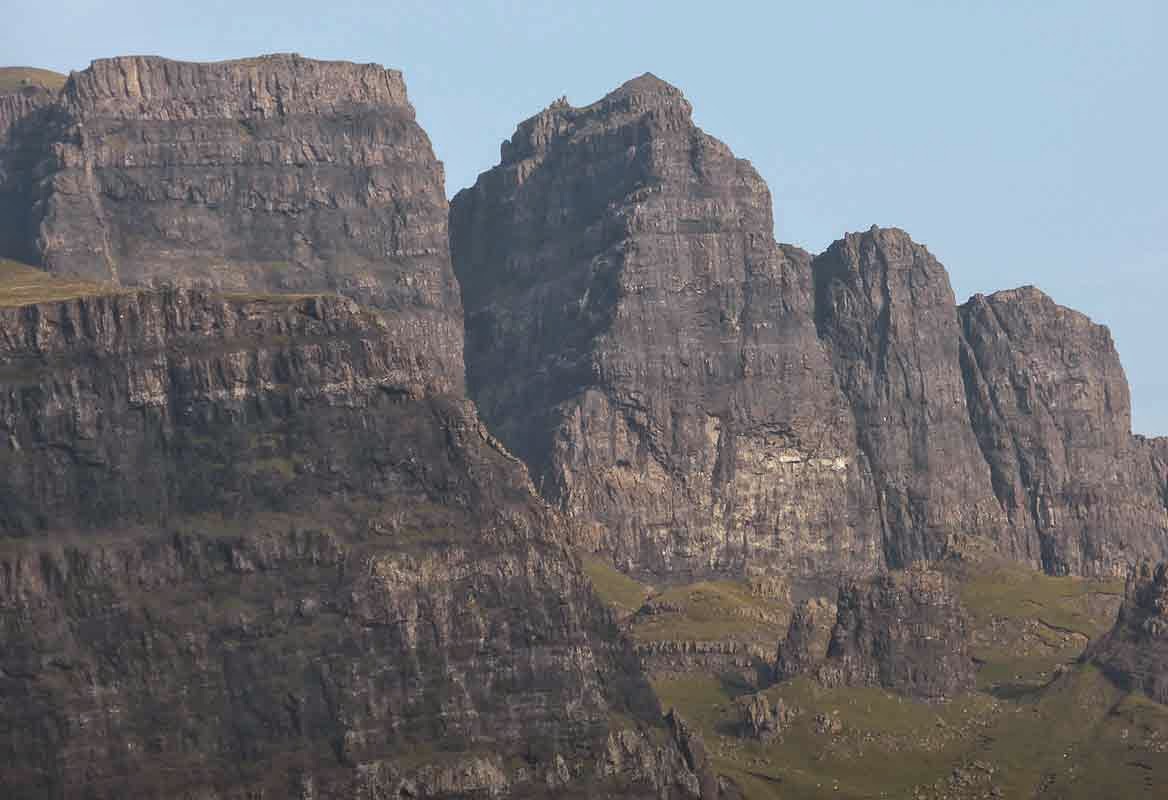 Once you are up there the view over the edge of these cliffs is mind-blowing. Dolomitic in scale. 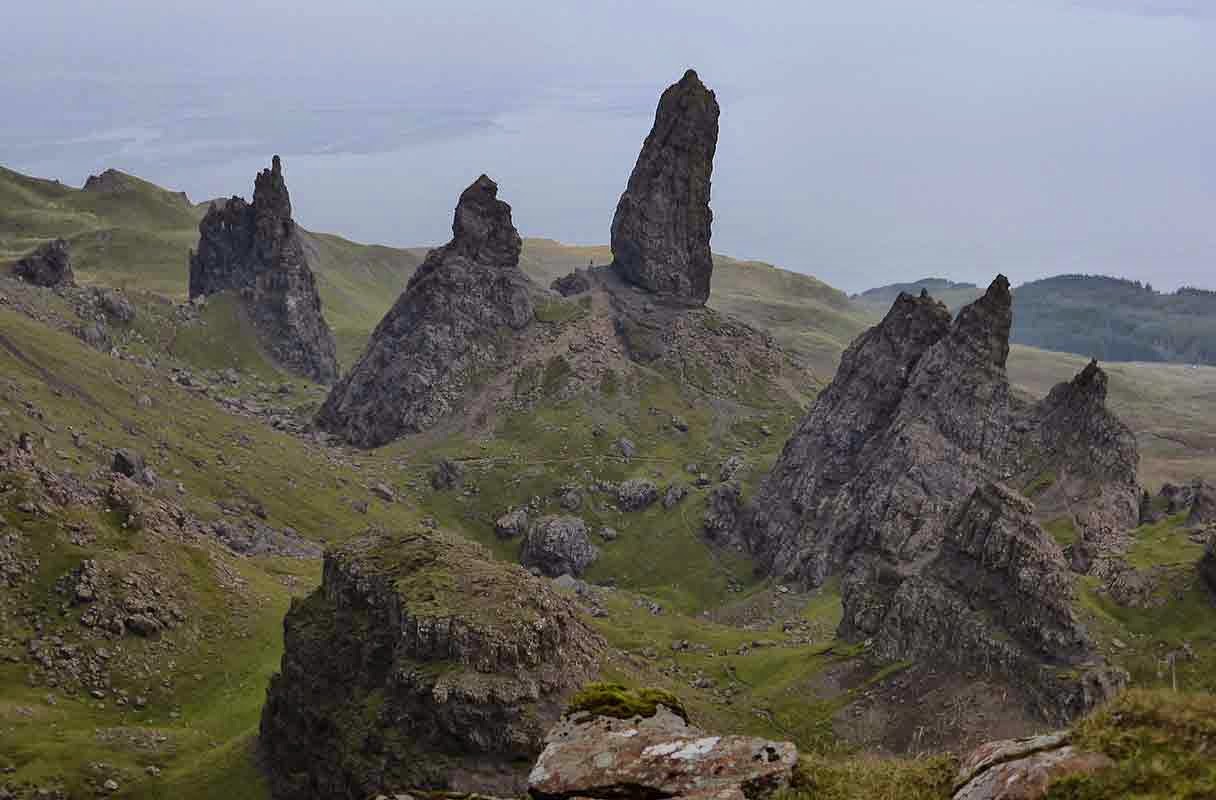 A view of the pinnacles from the ridge coming off The Storr. 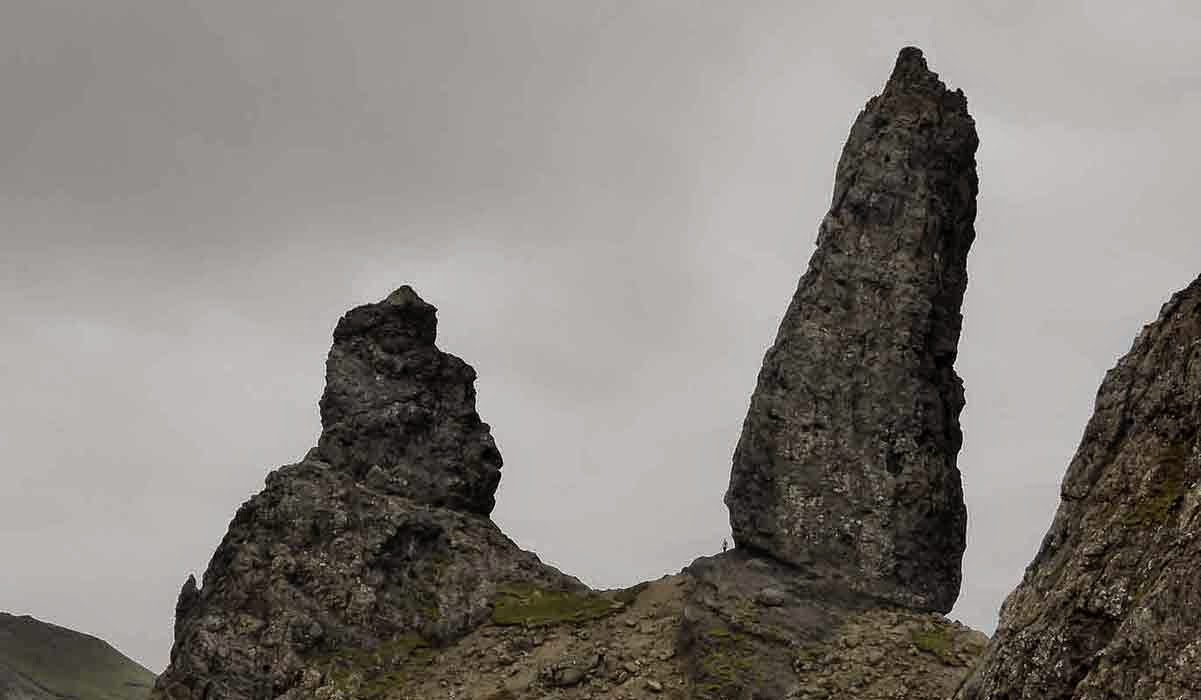 Another of the Old Man. We descended via an easy gully further along the ridge at the Bealach Beag  then contoured back round to the main path and the car. A 7 hour walking day and a magnificent outing. As we had dropped the tents and packed up from Uig our new campsite was going to be at Sligachan. Again good value at £6 and all the midges you could handle. 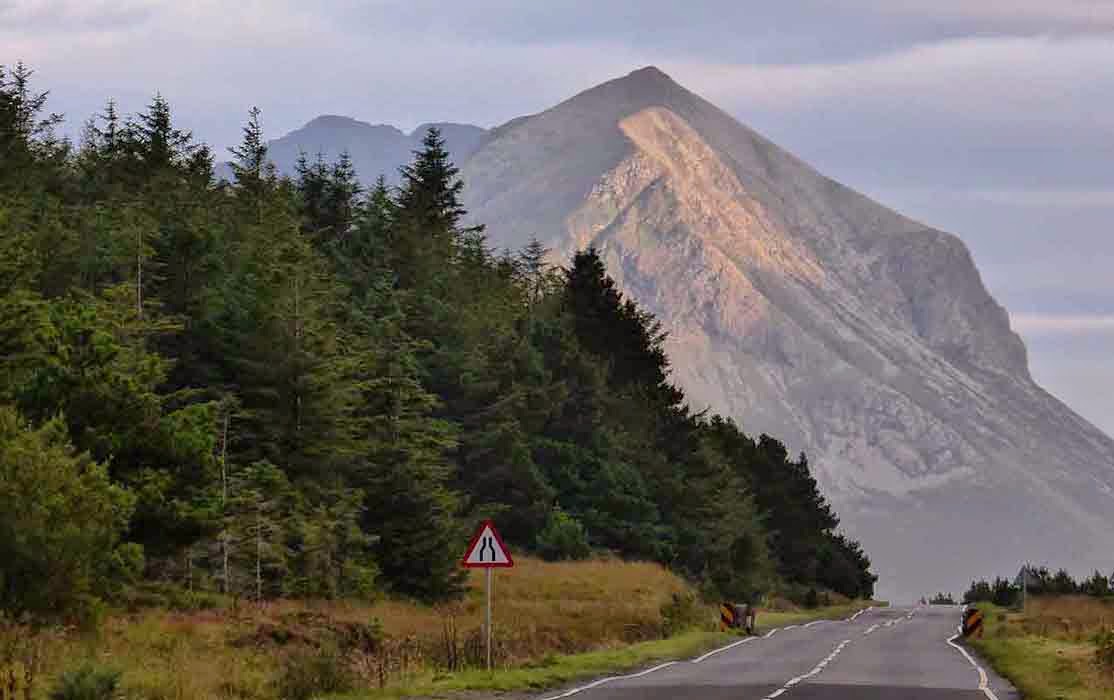 A view of Marsco, 742 metres, in soft evening light. The queen of the Red Cuillin despite being a lowly Graham. 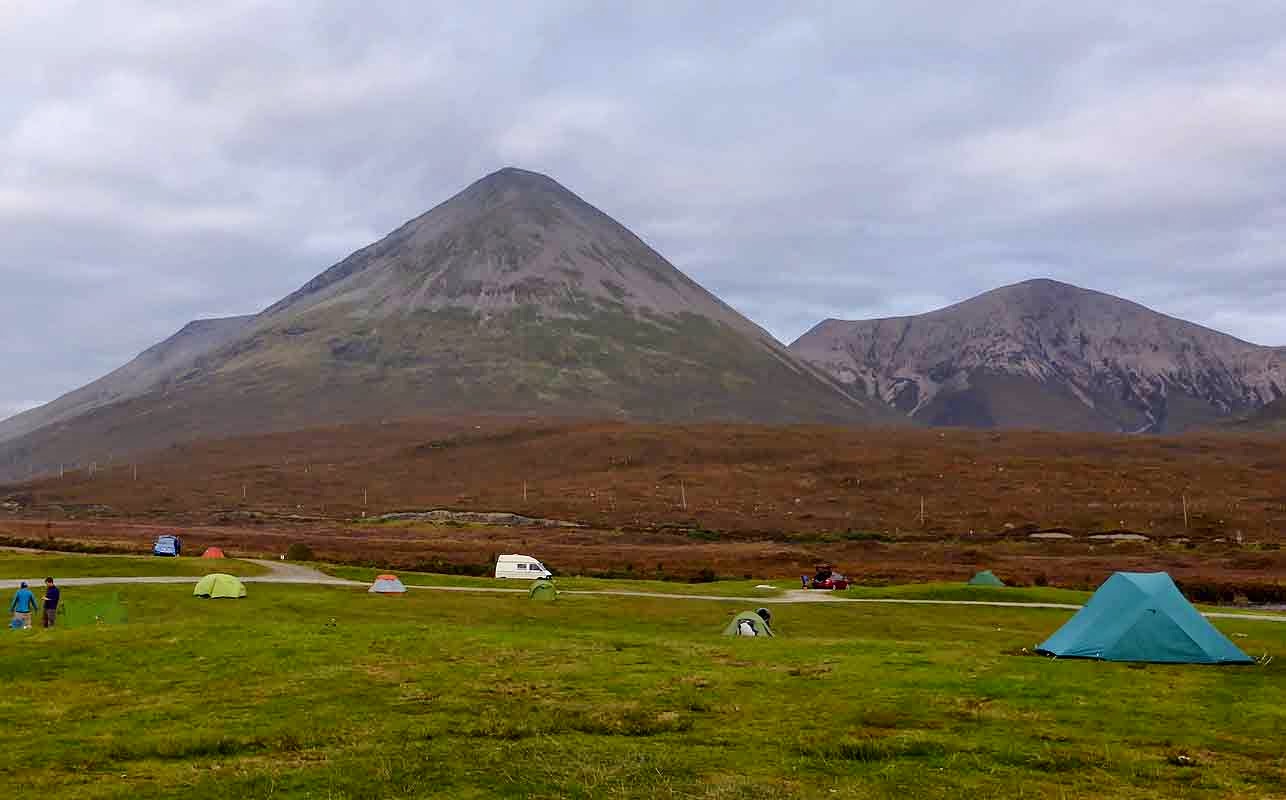 Glamaig and the Red Cuillin from our tents in Sligachan campsite. 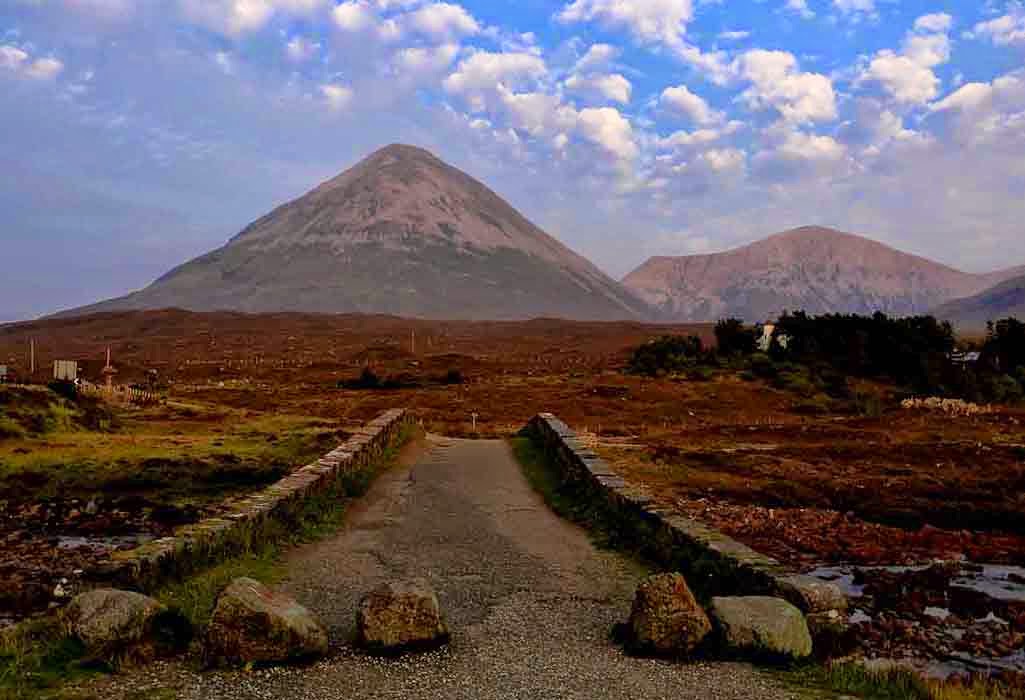 A fine view was had of the Black Cuillin as we walked down to the pub after eating our grub in the tents.
One thing that did annoy me greatly was the sight of so many false cairns everywhere near the river. This seems to be a growing trend recently and should be stopped. It's not nice and it's not clever to pile up stones! In my day we used to have manly cairns on the mountains just to denote summits but now its all this arty farty girly stuff and a trend towards expressionism and slim-line cairns! It must be stopped! Topple them I say! Attack, attack, attack... them all! Put your foot through them at every opportunity!!!
You would never get me altering the natural landscape in this fashion for my own amusement as it just detracts from the beauty of the surrounding mountains which need no adornment whatsoever. Bah and Humbug!
See photo below! 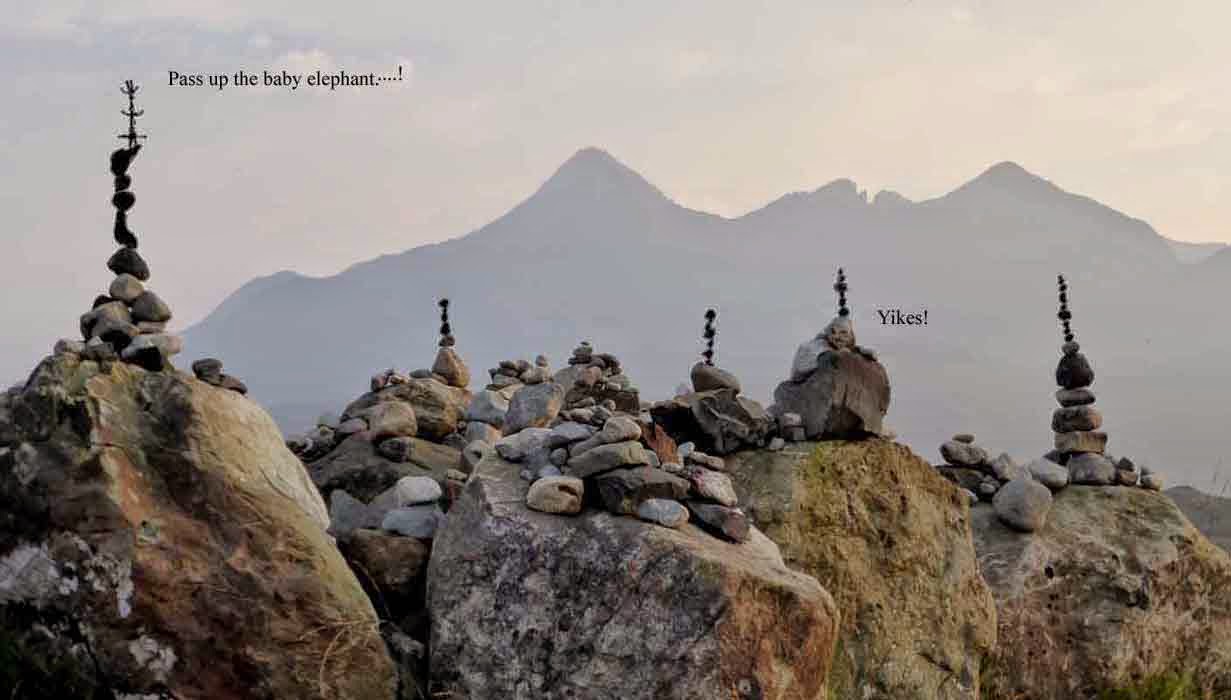 Video this week is another film as there seems to be an absence of good ones recently in the cinemas.
You can pick this up for £3 in most supermarkets and it's a cracker. Throughout human history rich and power hungry individuals have routinely used those less fortunate for their own ends. This film asks the question if you were ruthless enough and had money to spare would you take the back up opportunity that genetics offer in the modern era with the DNA genie already out the bottle or would a moral conscience prevail? One for our near future in cold reality. A smashing story simply told and great acting from the three leads make this a compelling watch and a real emotional journey. A five hankie job at the end and even stone hearted me had a lump in my throat and man grit in both eyes as the end titles rolled. Unforgettable, haunting and beautiful throughout. Wah!

I have to admit to actually liking those cairns. We also built a 'rock bunny' at Neist Point in an area with many loose rocks where people had been cairn building.

Your Storr photos are absolutely superb and I'm really jealous I hadn't been with you. The only trip we've had up to the Storr so far has been bad weather - probably the same reason you used to go in bad weather - that I couldn't get onto the Cuillin. I really fancy a go at the whole Trotternish Ridge but I expect I'll have to dust my tent off for that one.
Carol.

oh well, maybe next time but I see you're all Skyed out now, no more hills to do up here! The Scillies have a beach full of those weird cairns, done by the local artist

Great pictures again Bob.
When I looked at the Old Man from the road I imagined it around 15 feet high. From your pictures I now know it's 50 feet high.
Arty farty cairns ! Guilty as charged your honour.

Really envious Bob, I've still these ones to do and at the moment I'm out of action with a knee injury that's refusing to clear up. A 7 hour walking day is certainly impossible just now. Ah well, there's always next year.
Agree with you about the cairns, the natural environment doesn't need all that arty farty nonsense.

Hi Carol,
On the subject of slim cairns...
I liked them when I first noticed them years ago on Holy isle but since then they have increased and slimmed down to the point where they are no longer "manly." They do not squat in the landscape like frozen trolls caught out when the sun hit and turned them grey and hard on the hillside. A manly bundle of heaved stonework built by honest toiling hands used to manly outdoor endeavour... WHO HAVE MADE IT ALL THE WAY TO A SUMMIT OF A MOUNTAIN AND HAVE THUS EARNED THE RIGHT TO BUILD A ****** CAIRN!!!!!!!!!!!!.
Oh No...Now they skip and boldly proclaim themselves at lower levels as yet another of those currently trendy "art forms".
More often than not they are "crafted" by people who frequent tea rooms and debate social issues over slim line and very probably "girly biscuits" raised, no doubt, in a slim line tower on the plate!!!
I have now made it my new mission to put an end to similar cairns. to scatter them, kick them and to smite the hell out of them at every opportunity. Offensive action is needed before they spread faster than wind turbines.
It's a class war to wrestle our decently solid working class pile of stones from the art school brigade who want to change the natural order of things and drag them back down to the squat clusters on mountains we have built since the last ice age. If it was good enough for the ancient Egyptians and Britons to stick their grannies and uncles under them it should be good enough for a modern hill walker.
That's my take on it.

Hi Alistair,
Trust you to go to the opposite end of the UK when we make a rare visit to the Misty Isle. There's plenty of hills still to do in Skye.

Cheers Jim,
Forgot how impressive a place Storr is on a good day. It's a shame it's consigned to a wet weather option for a large number who visit as the full round is a great day out in a remote location away from the crowds that frequent the Black Cuillin.

Hi Neil,
Hopefully your knee will clear up soon. Both myself and Alex had severe knee problems years ago after doing the Munros and various European back packing tours every year with a stupidly heavy rucksack in my case.
Rest and a change of sport,to kayaking and cycling, worked for me as they were able to repair themselves after a year out without any hillwalking whatsoever and eventually stopped crunching at the knee joints altogether. (Even a small hill like Arthur's Seat was very painful to climb back then)
For the last ten years,(touch wood)both our knees are working fine again on hills so recovery, even from a serious knee condition is possible given a period of rest.
Failing that hard drugs and faith healing is worth considering :o)