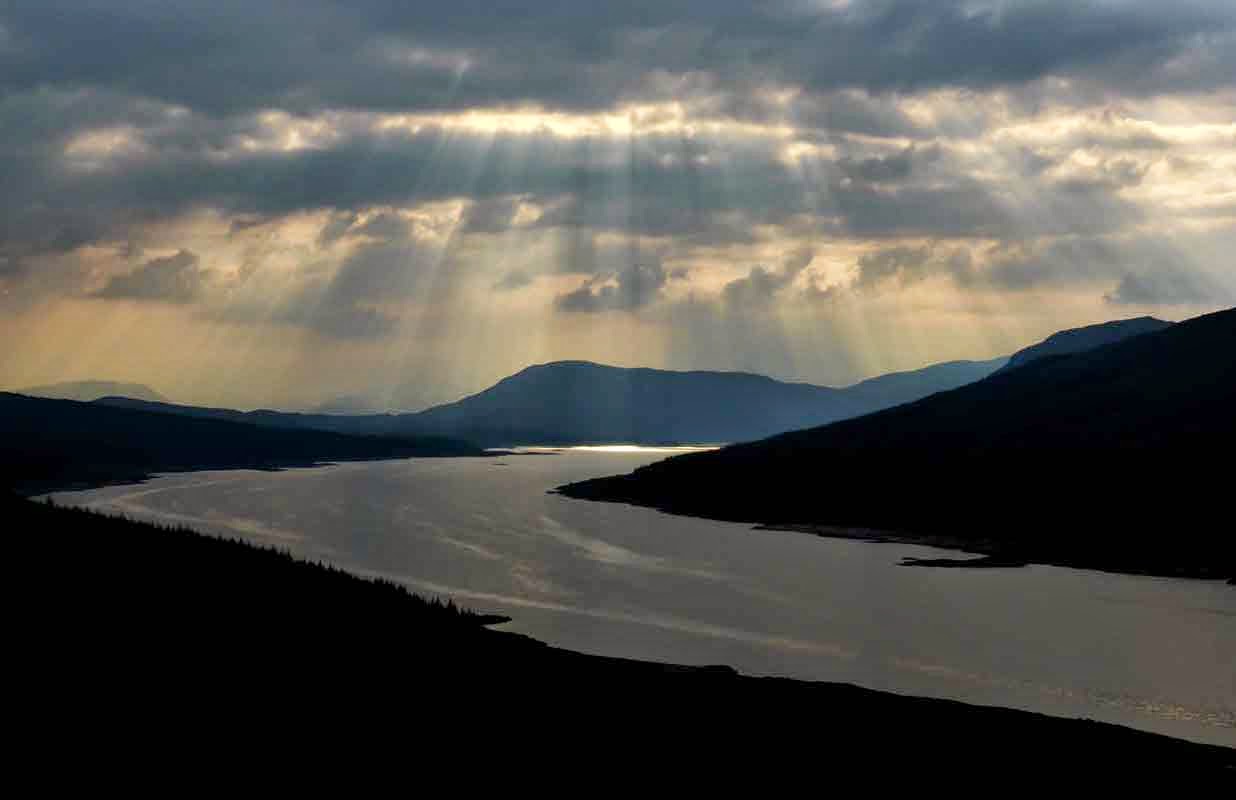 ALL PHOTOS CLICK FULL SCREEN
Strange but beautiful light conditions on this three day trip to Skye and Harris. Alex was keen to bag some more Corbetts and I was keen to see Harris and Skye again. 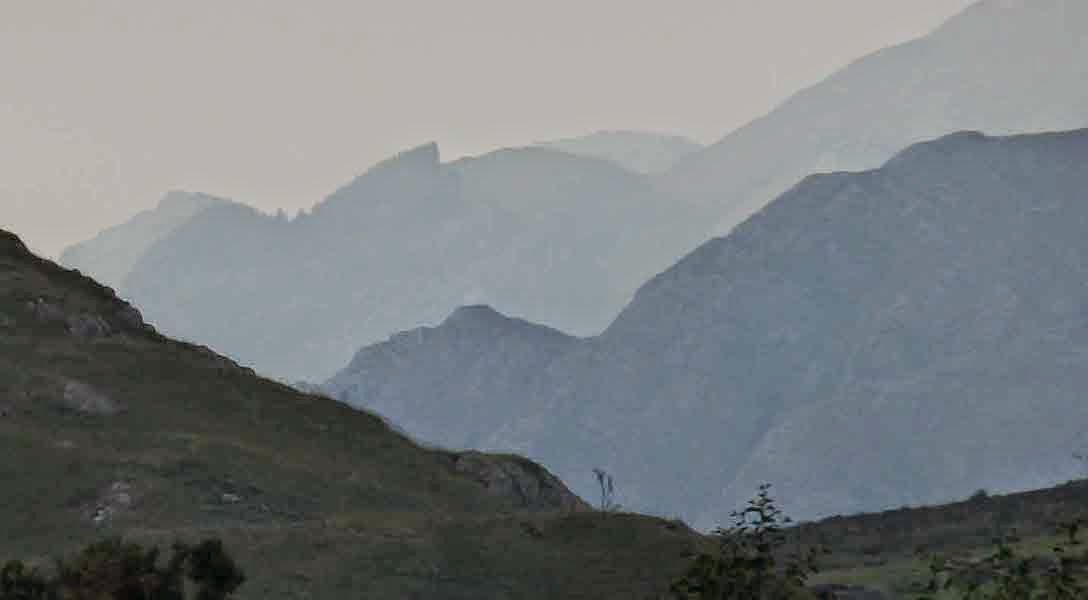 The mountain scenery on the drive up resembled a Japanese watercolour ... full of subdued pastel light that made the surroundings seem even higher and more impressive passing under the Five Sisters of Kintail near Clunie Inn on the way to Skye. 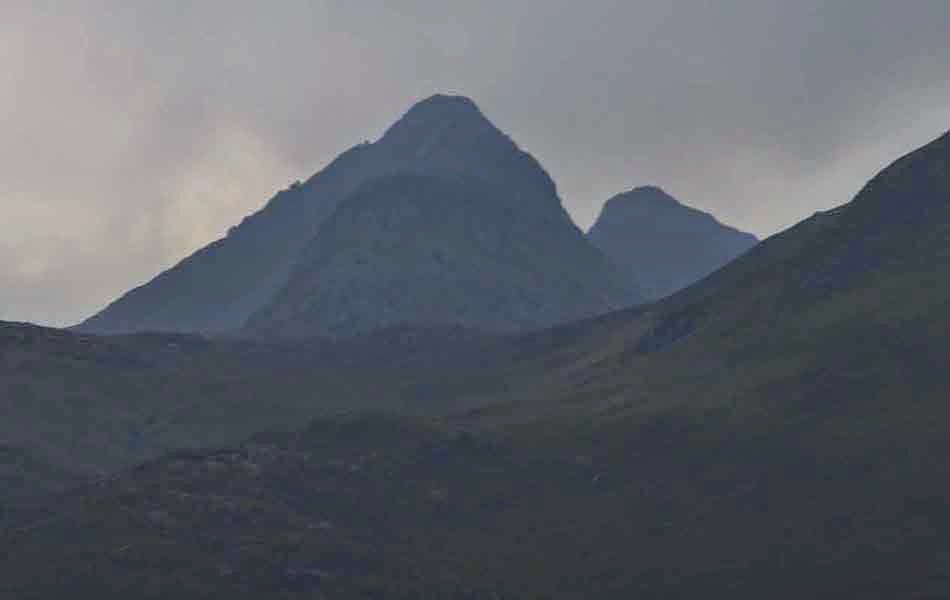 The Forcan Ridge on The Saddle looked amazing. I always like conditions when soft ridge after ridge fades into the distance yet it's still warm and dry. An Indian Summer. Two weeks of sun kissed autumnal luxury wasn't to be scorned in Scotland, land of the dripping sun, so we headed north quickly before the rain came back. 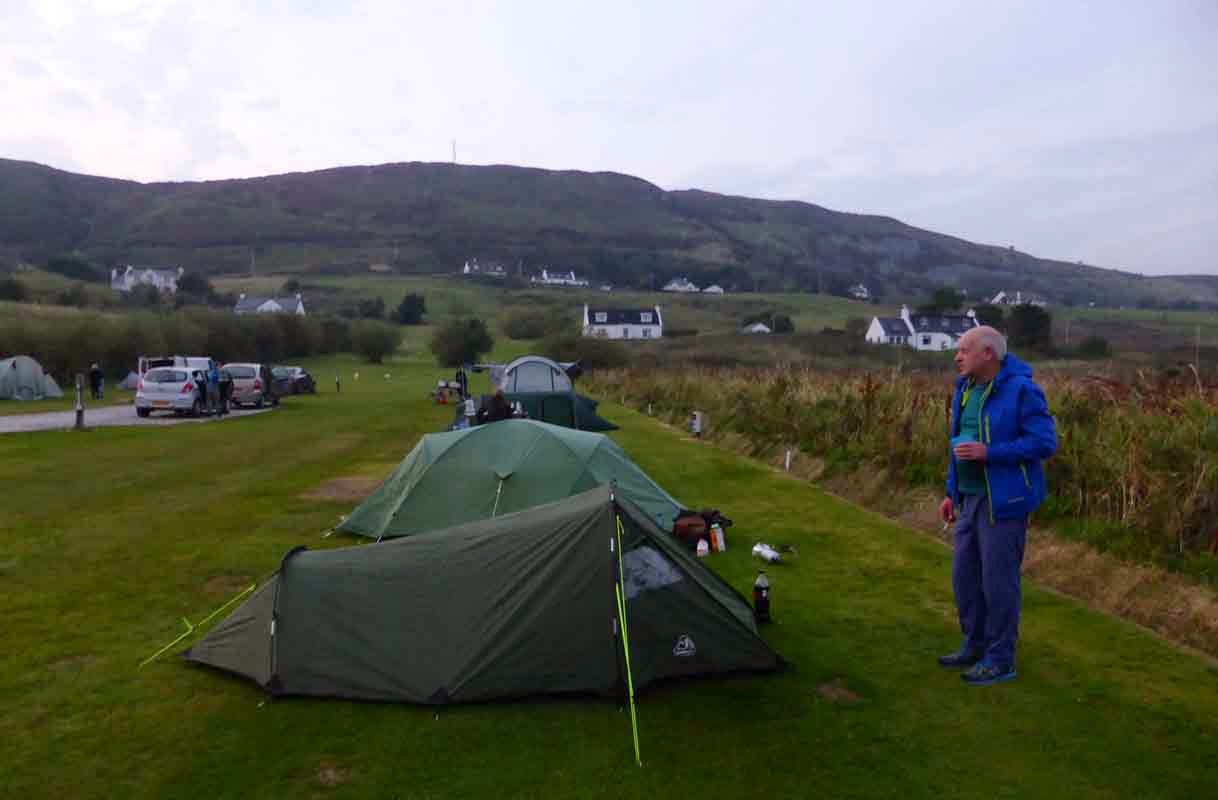 Uig Campsite on Skye. £6  per tent a night and good toilet facilities,with free showers which was great value. We even managed a couple of pints each in the pub. Two pints and a packet of crisps. £8. No wonder folk drink at home these days. You can buy an eight pack of discount cooking lager for that... and a six pack of assorted crisps. 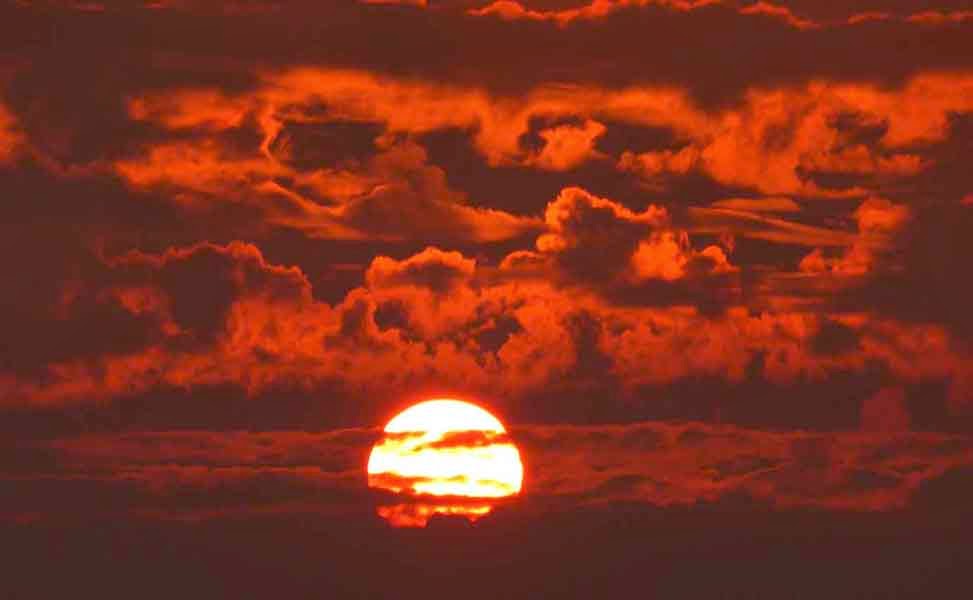 We stayed out of the pub long enough to see a memorable sunset which wouldn't have looked out of place after a desert dust storm due to the hazy light. 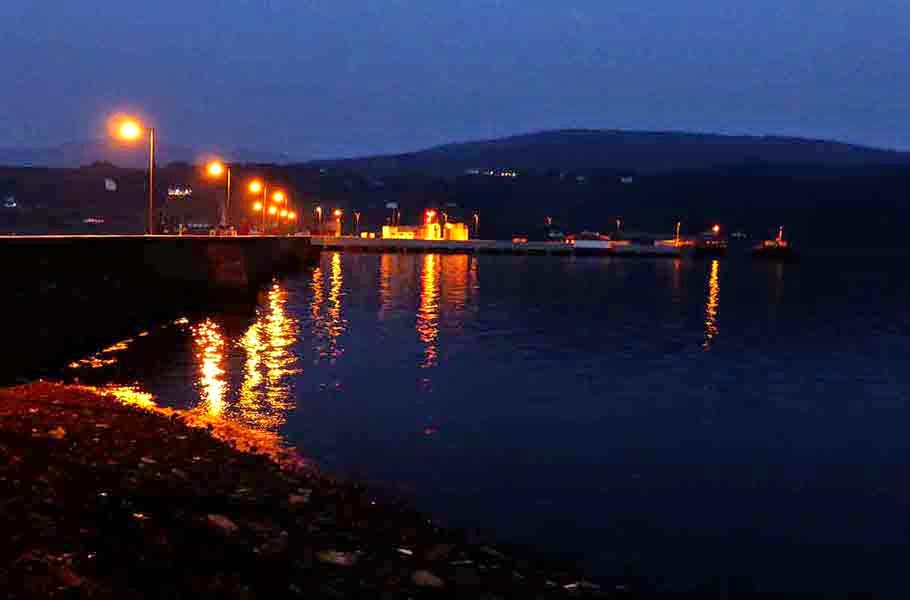 We also found time to wander round the metropolis of Uig. It's where the ferry leaves to cross to Tarbet on Harris, which is why we were there. 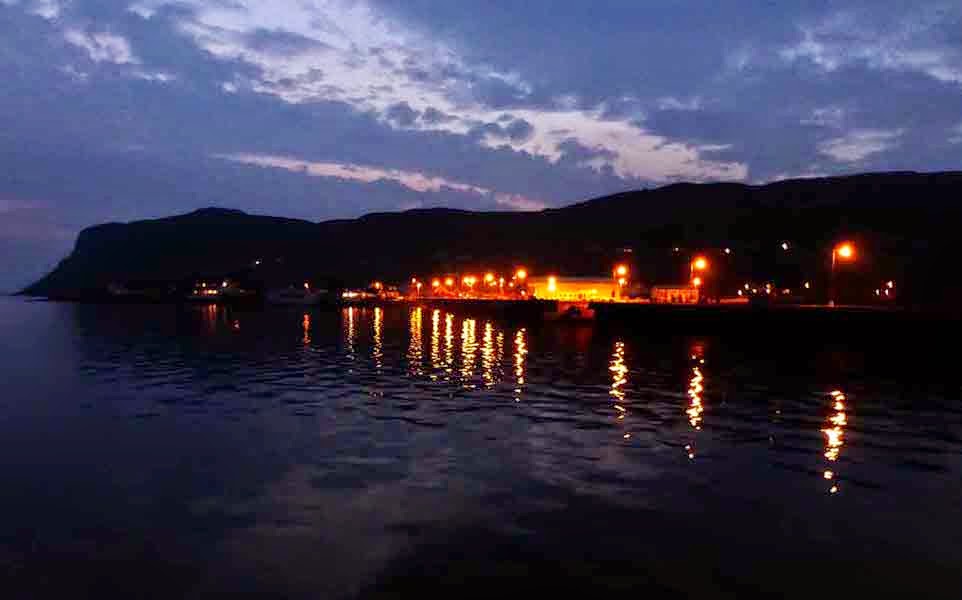 The other half of Uig from the pier. 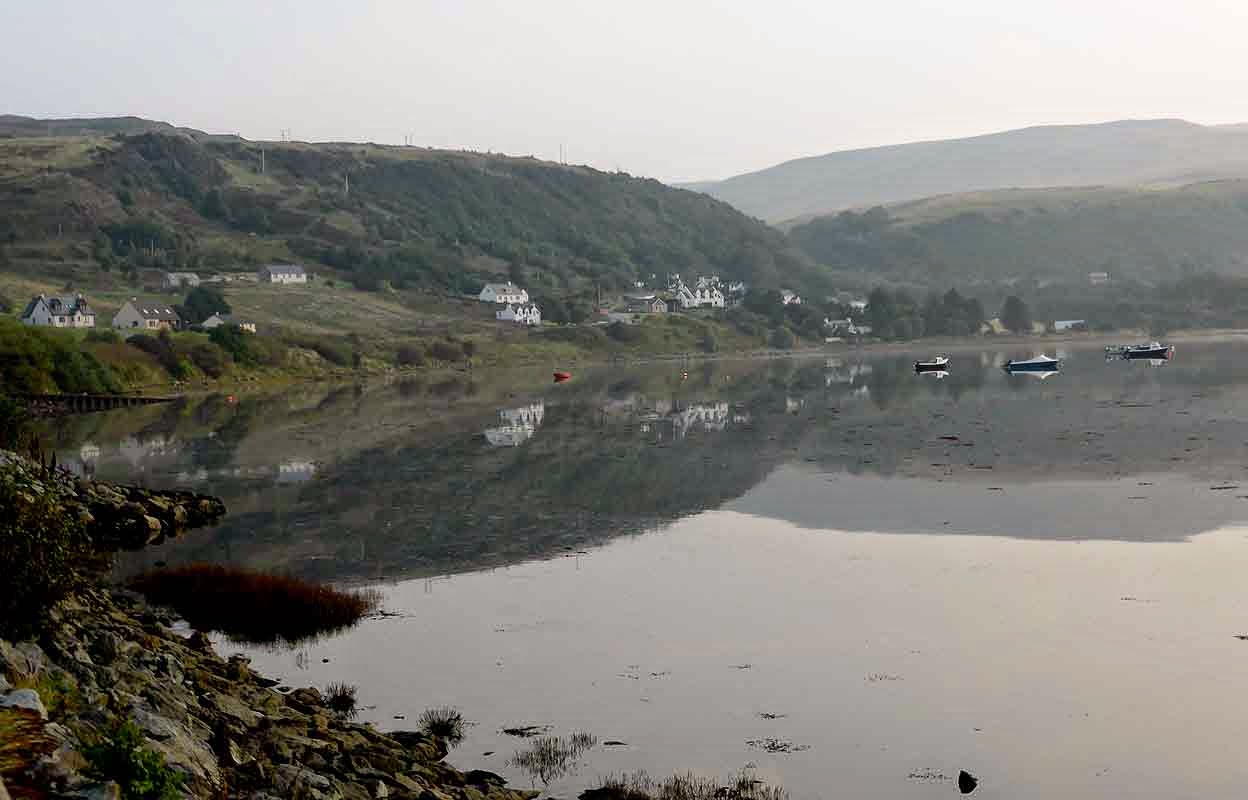 In the morning it was still hazy but fairly warm with nice reflections and a complete lack of wind. Cue Midges. God, they were bad... and as we hadn't camped since the spring we both forgot midge repellent and midge nets. I had a £3 pound head hood sitting unused in the house from Go outdoors ( product placement- where's my fee?) and a full bottle of " "zap em hard" sitting in the same cupboard. I'd also forgotten my fold up cutlery set and had to eat all my meals with a tent peg.
A plate of spaghetti, mince and peas on the first night proved time consuming but rewarding. 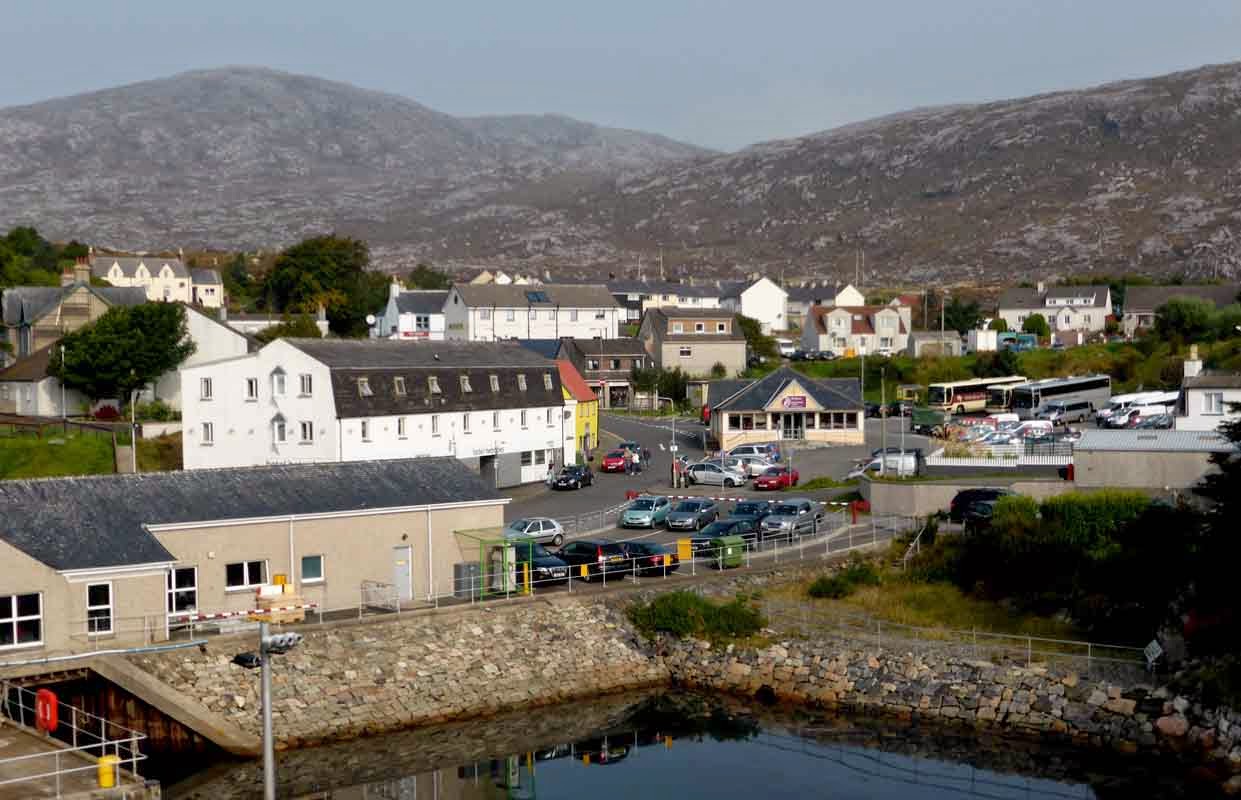 Tarbet on Harris in the Outer Hebrides. I'd climbed Clisham before around 20 years ago, also during a mainland summer heat wave and it had snowed on the summit ridge while the rest of Scotland boiled. Harris is like that. Fickle weather this far north.
Tarbet itself seemed much cleaner and nicer than I remembered it. A new distillery is being built on the outskirts which might give the locals some extra income. 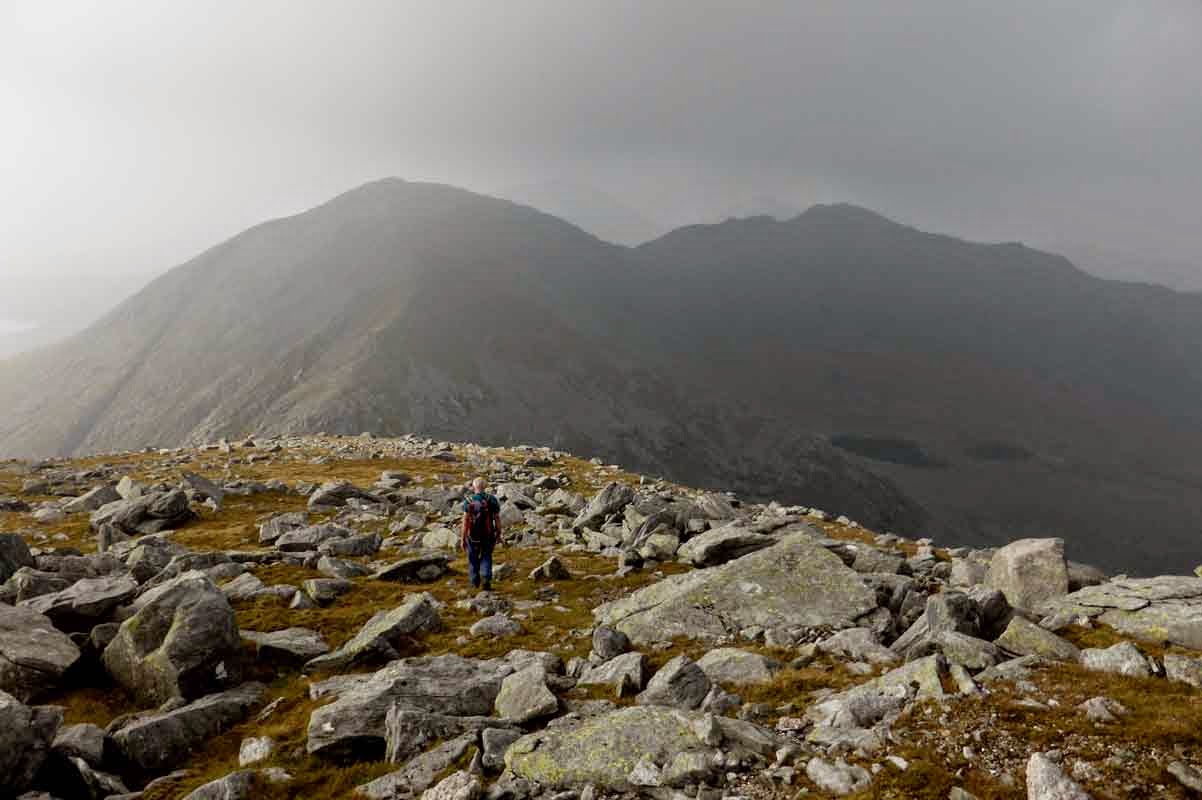 We jumped on the bus round to Clisham, Alex free bus pass, me £2:70 pence one way. Got off at second car park at the top of the pass and headed up the ridge. The weather this time was warmer but still misty near the summit. The midges must have got the same bus as us as they were present at every step up the hillside. 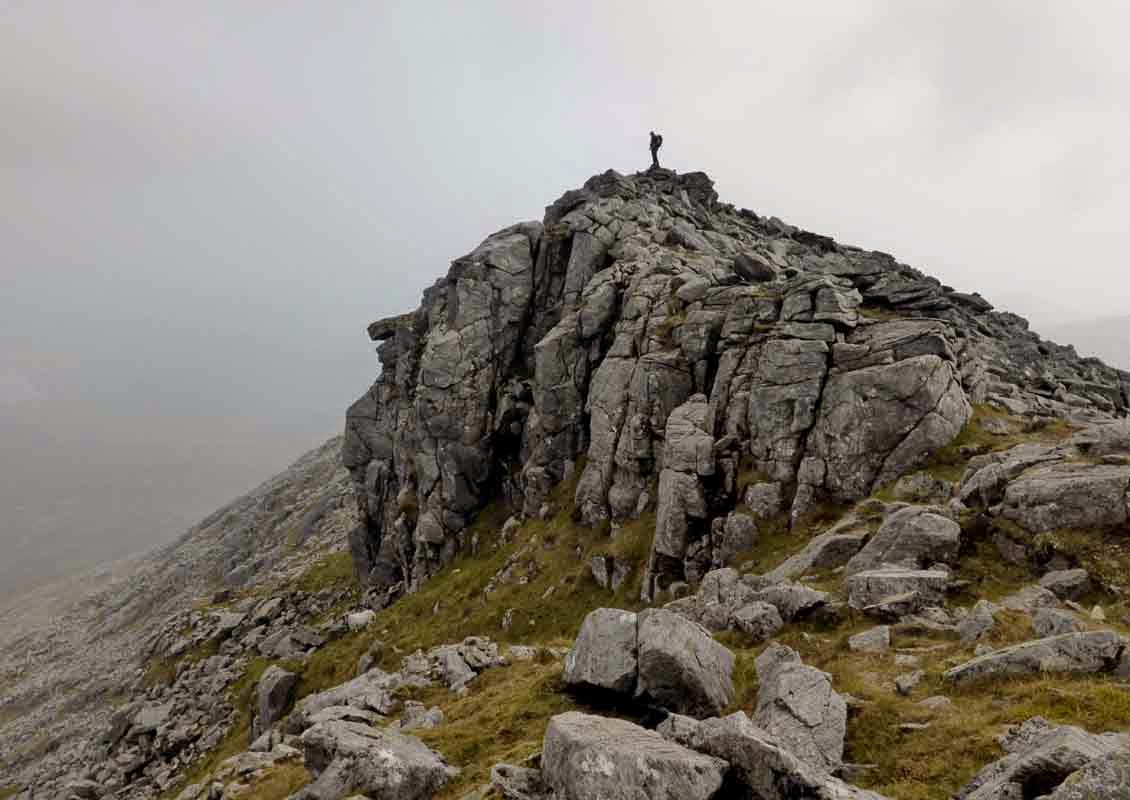 The summit of Clisham came first then the ridge to Mullach- Fo Dheas and Hartaval. 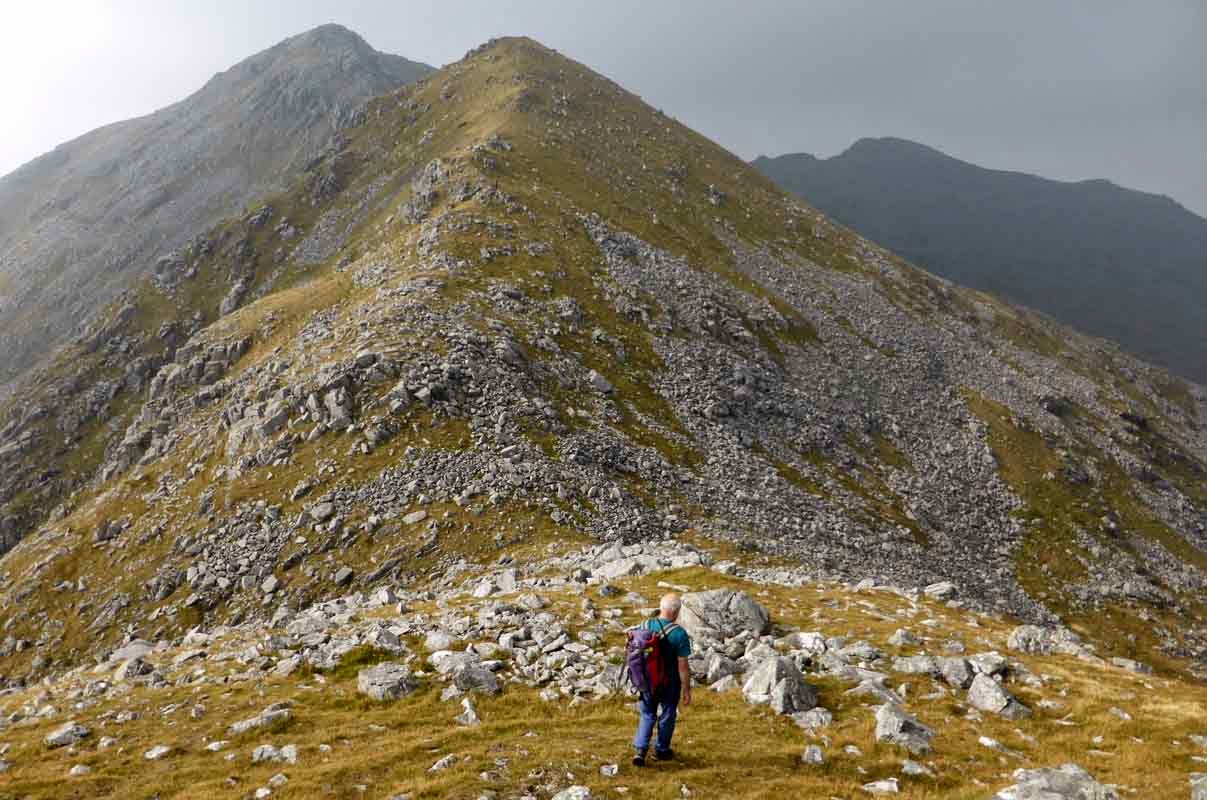 Partial views of a hazy but nice looking ridgeline. Very impressed with the mountains on Harris. First time I've seen them dry. 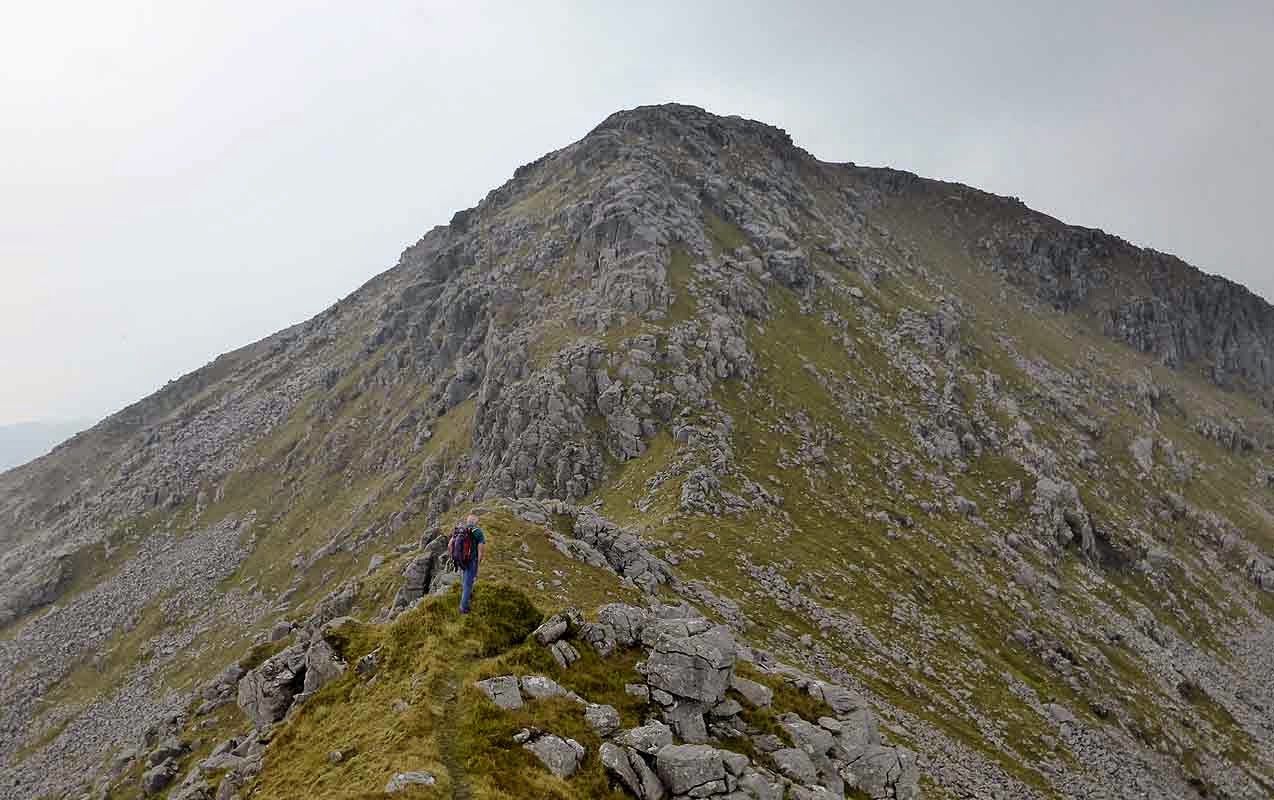 Only met two other walkers. A young couple. 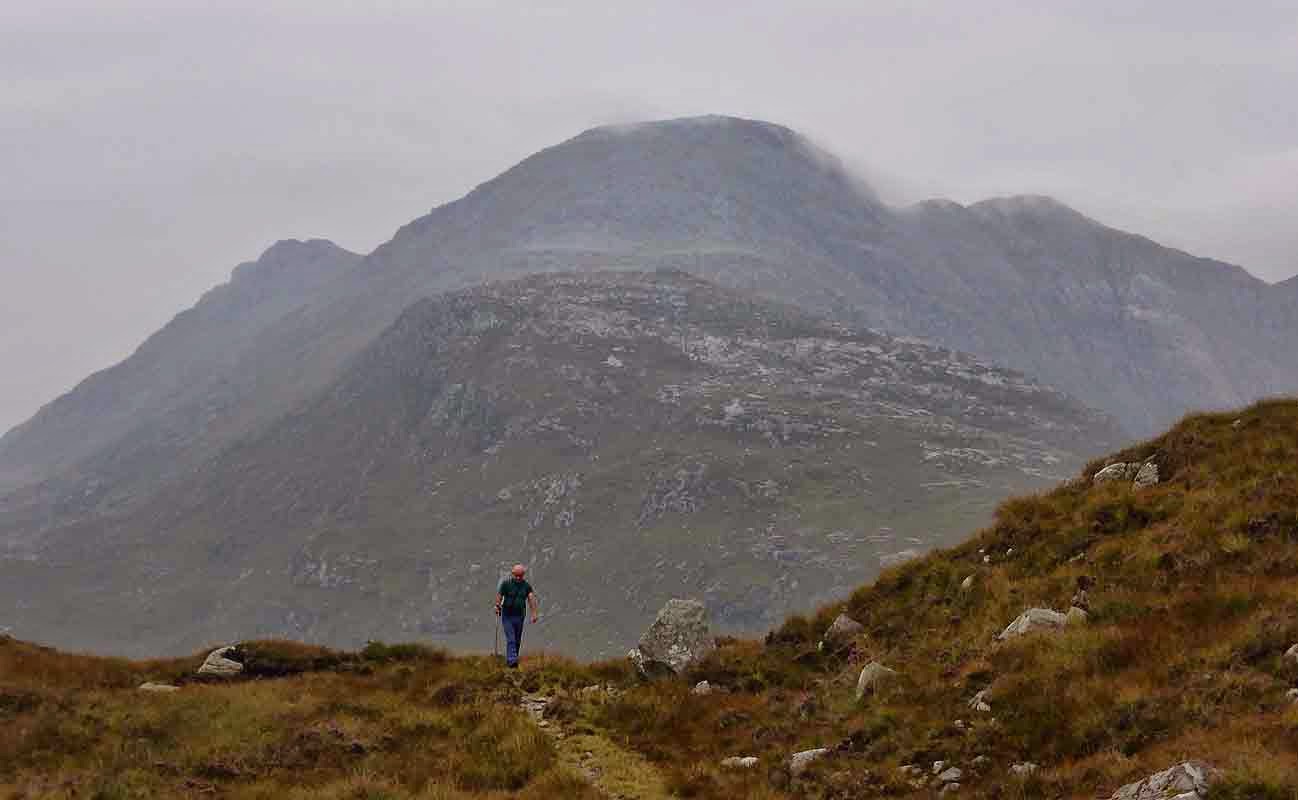 Returned off the back end of the ridge making for the path leading out to the old whaling station chimney.
9:40 am departed Uig on Ferry. 11:40am get bus in Tarbet. 12:00 noon start walking up hill. Midge must have been on bus with us. Step- bite- step all the way up. Six hour hill walk. No stops without tiny teeth attack. Bus back to Tarbet. Ferry back to Uig. In Tent by 10:00pm. Midge follow us back.Waiting for us inside tent. Kill! Kill! Kill! with spare socks rubbed frantically on fabric. No midge. No Biting. Happy at last. No pub. Tent peg cold beans and sausage into open mouth straight from tin. Toilet duties and clean teeth. Scratch assorted bites. Dark. Fall asleep. Alex snore from his tent. Me snore back from mine. 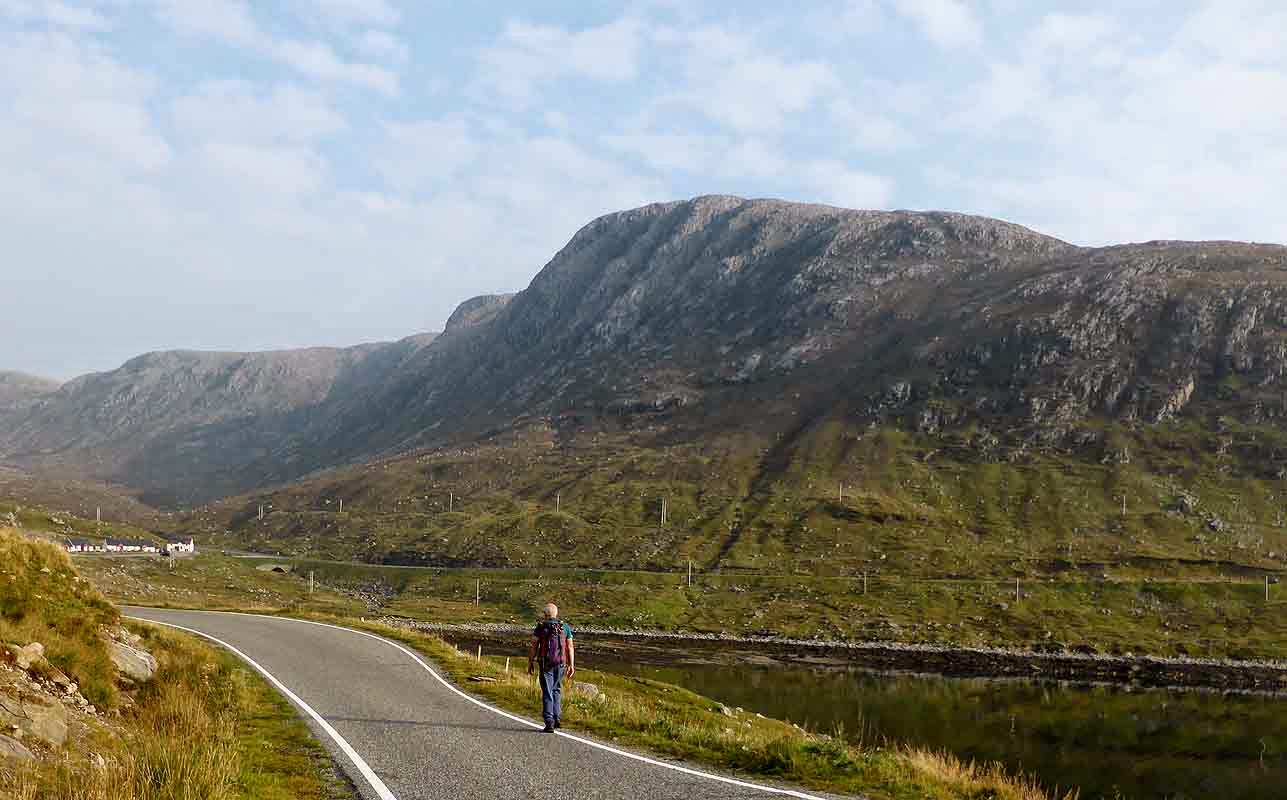 Alex on the minor road back from Clisham. A happy man gets his Corbett tick.
Video today is a memorable mood creation from the Lord of the Rings trilogy. Although one of the greatest books and film adaptations of modern times a lot of people have still not seen it due to it being "a fantasy film."
The First and Second World War, Medieval life and battles throughout Britain and Europe, Norse and Anglo Saxon myths and sagas. Hitler, Mussolini, and Churchill. Nazi storm troopers and the Blitzkrieg. Greed and Addiction. Concentration camp victims. It's all in there under the surface... just transported to "Middle Earth" and a different setting.
Same with Game of Thrones which seems to be an American reimagining of Medieval Britain and Hadrian's Wall with added dragons. That is based initially on real events as well with an extra twist.
Anyone who has watched someone close to them slowly pass away with a wasting illness will recognise that look at the end of their life when they just give up eventually, in Gollum's eyes, surely one of fantasy literatures greatest characters. Just a fantasy film? I think not.
Beautiful Lyrics and Music to this melancholy song which sums up the essence of the conflicted individual perfectly in a few words...

That final section up to Mullach fo Deas is steep isn't it?! Is the route obvious? is there some kind of path by now? If not, I suppose you could always go around it to the left...

It still amazes me that there's buses around Harris - there were very few back in my day! Mind you, there weren't any hillwalkers on the islands back then - although, Clisham being a Corbett, maybe there were some doing that particular peak.
Carol.

Fairy Glen in Uig is what I remember Bob.
Sounds like you bought some expensive crisps.
Uig and a lot of the coast of Skye is picture postcard and that one of yours shows why.
That's a brilliant sunset picture too. One of my most memorable days watching the sun go down was on Benbecula on midsummers day.
Midges. The best repellent for Galloway midges is Avon's 'Skin So Soft', but the islanders might be a different breed.
You guys are still pretty intrepid to do stuff at that speed. I suppose the midges help ha ha.

Hi Carol,
Yes it would be steep coming down but the rock has good friction for scrambling on Harris. Very faint path in places after Clisham but not obvious.
You can see the bus depot in the Tarbet photo and I think our bus is the furthest away. A few elderly locals were conversing in Gaelic on it which was nice to here. Felt like the Outer Hebrides after that.

Hello Paul,
Cheers. Not much to do in Uig though unless you are exploring Harris and Lewis or North Skye. Sligachan campsite is £6 too and it has a busier feel to it and a wider variety of hills.

Beautiful photos, just gorgeous.
I also love those Lord of the Rings movies. In the USA, they were released at Christmas time for 3 years in a row and our son loved them too.
Beautiful song too.

Evening Jim,
Yeah, the Fairy Glen is nice. Last time I was in that pub in Uig it was filled with leather clad bikers, Motorhead were blasting out Ace of Spades on the jukebox and a great night was had by all. Seemed a bit too tame this time around.
Skin so soft is good.

Hi Kay,
Same here with the cinema release dates at Christmas. I'd never heard that Icelandic singer before LOTR but her voice really suits the song. Fran Walsh, Peter Jackson's other half composed the lyrics and she also provided the Black riders high pitched scream in the films.