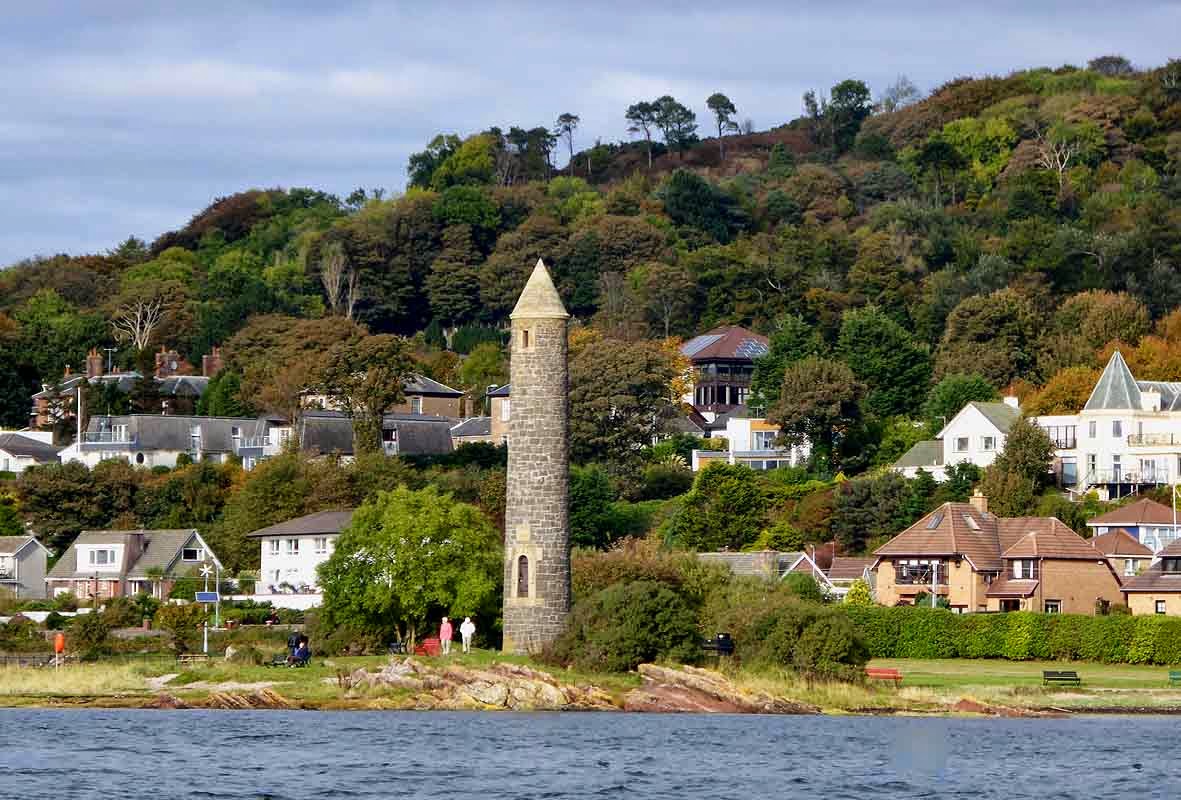 ALL PHOTOS CLICK FULL SCREEN
A trip from a couple of weeks ago saw an invitation from my friends, John and wife Gail and teenage daughter Morven, who asked if I would like to go on a geocaching trip with them, touring around the Firth of Clyde and its Islands. As a cracking October day was forecast and I like a wide variety of outdoor pursuits I was keen to go. The launch point was from the marina at Largs, which has a public slipway, not far from the pencil, seen above. 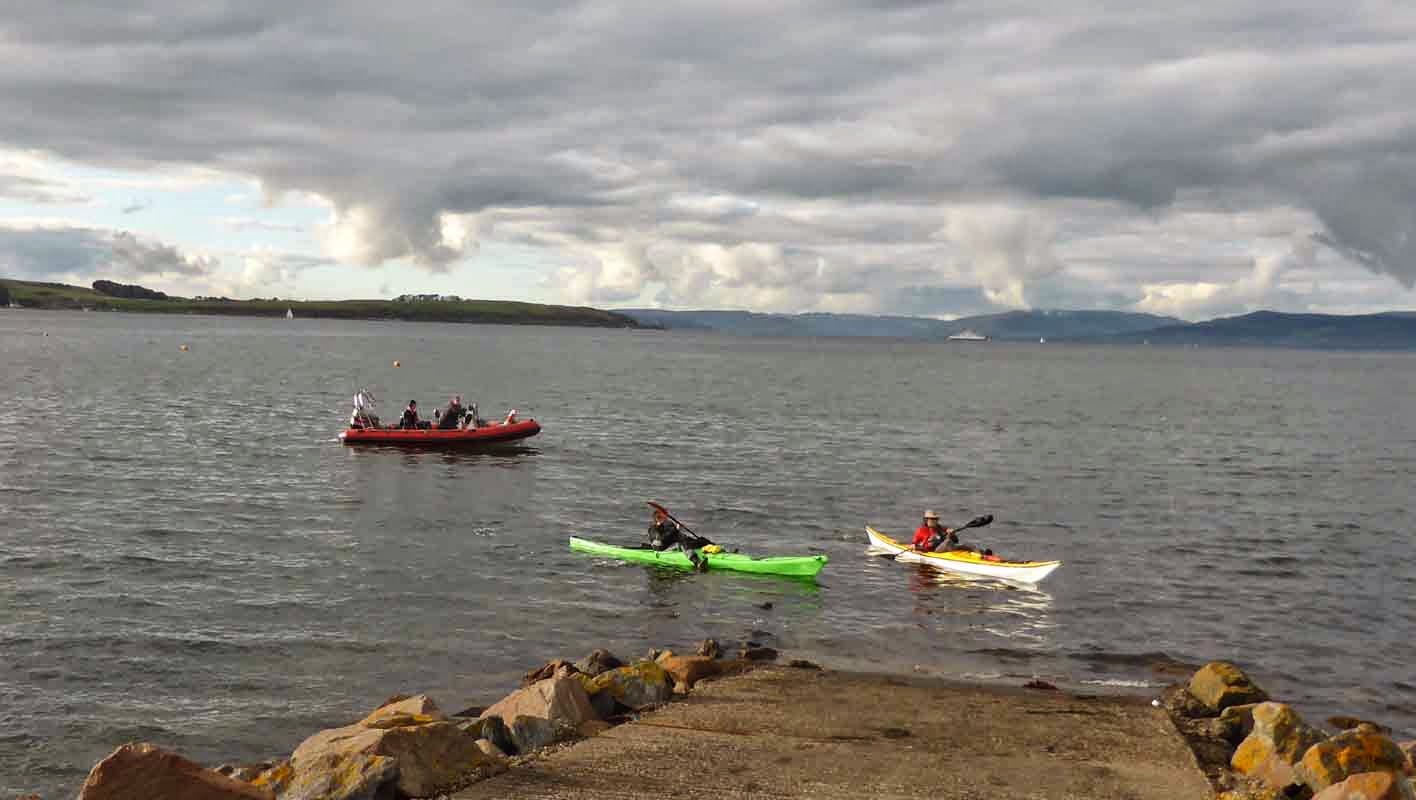 Two Kayaks and the RIB (rigid inflatable Boat) near the launch slipway. I usually stand up to my thighs in the sea at this point if conditions are choppy to help steady the boat. 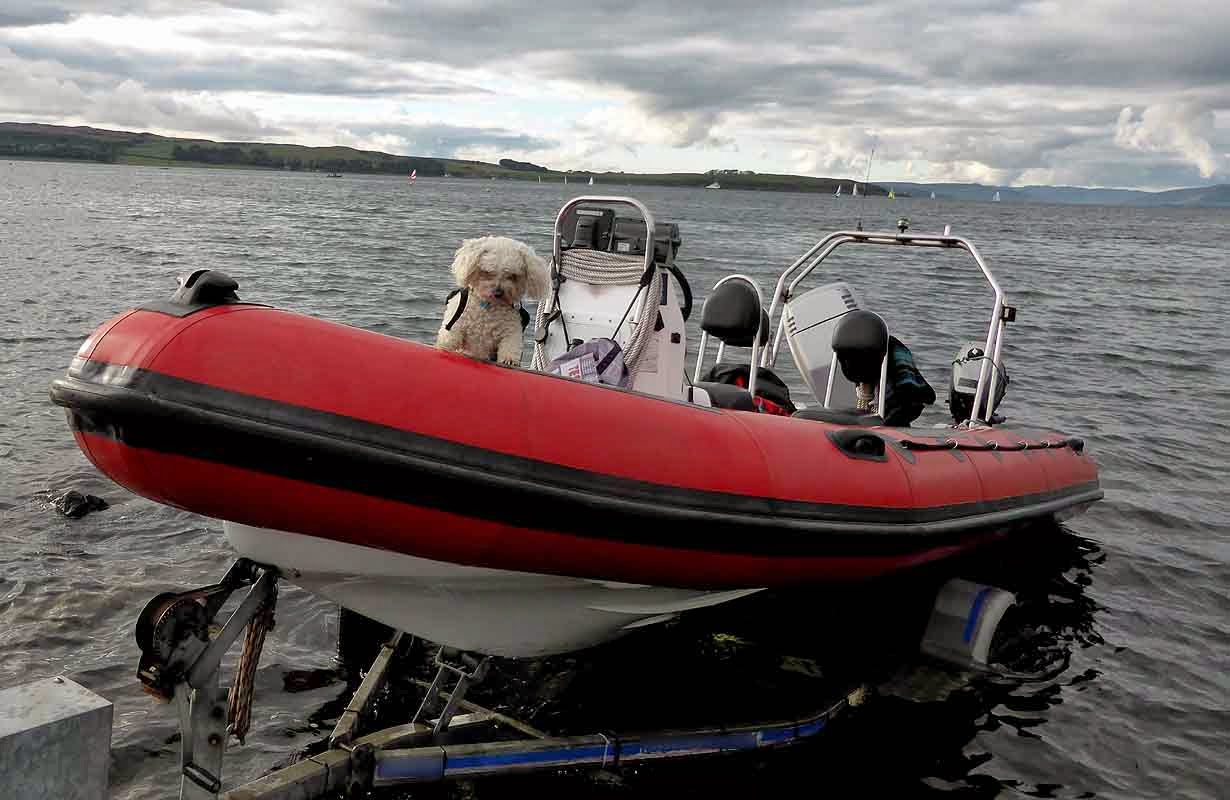 The Captain barks out instructions to the crew. " Have my bone, new collar, and best sailing jacket laid out. I may go ashore on the islands at some point." 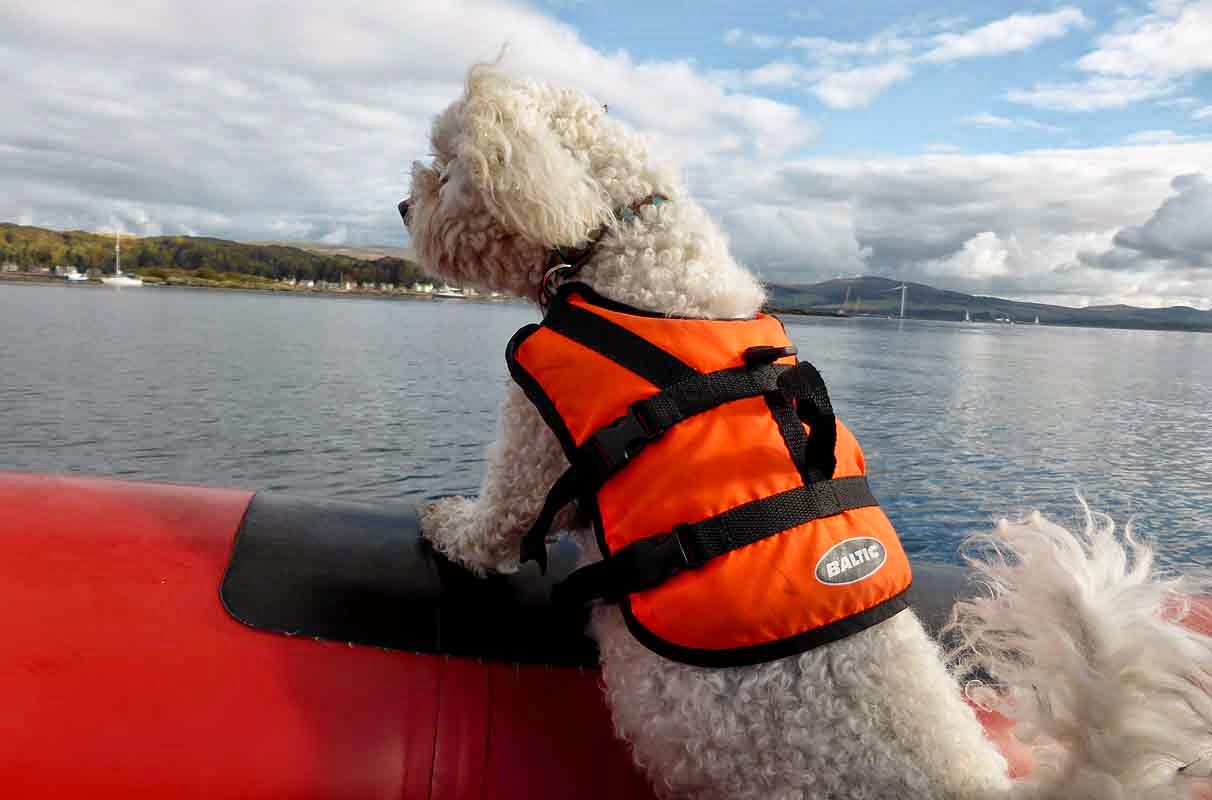 Once on the water " The smartest dug in the trade" kept his eyes peeled for danger. 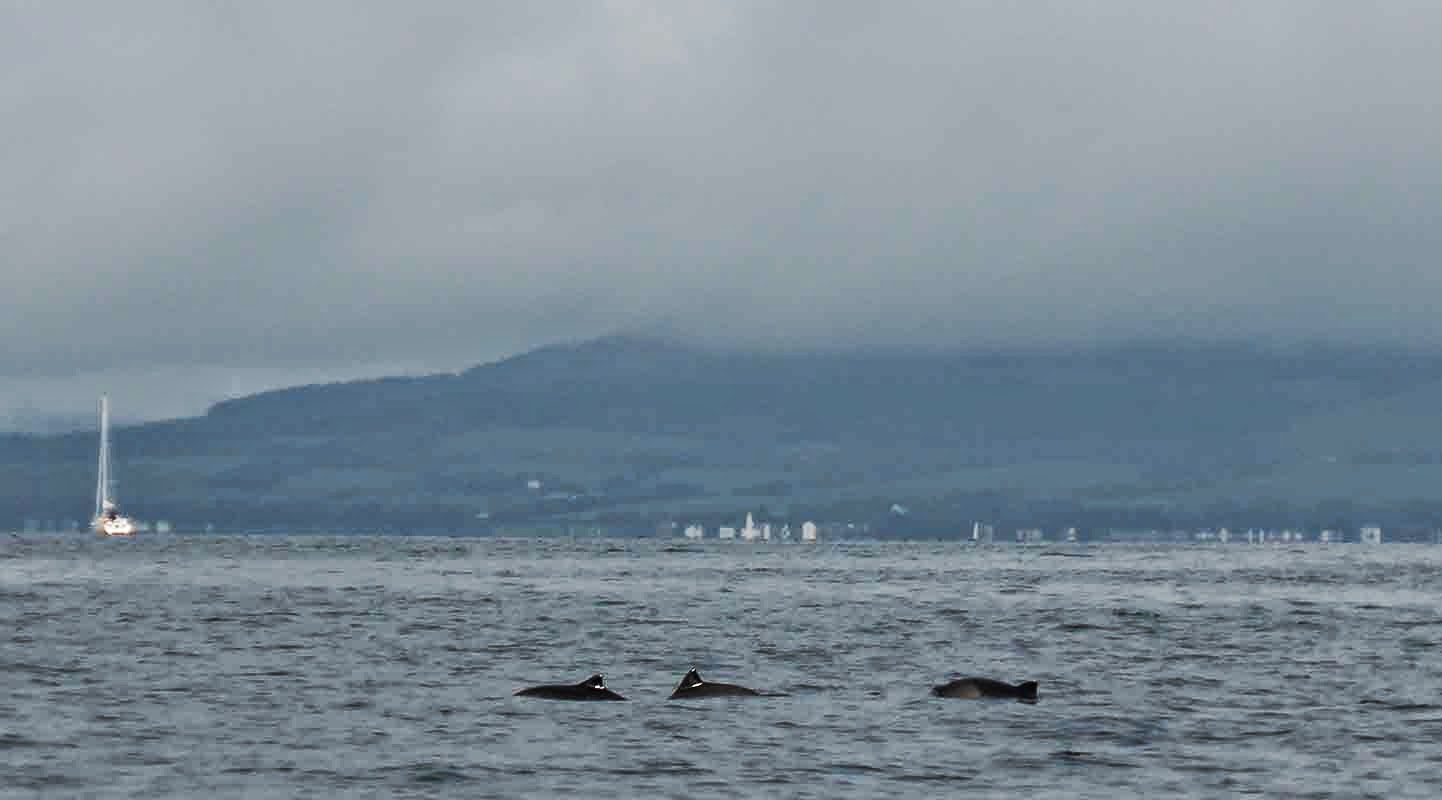 A family group of harbour porpoise ( I think) which at 3 to 7 feet long (2 metres), are usually smaller than the 6 to 12 foot long dolphins that also frequent these waters and occasionally attack them. Porpoise are shy and not as numerous as dolphins world wide. They don't tend to live much longer than a decade swimming in the wild. 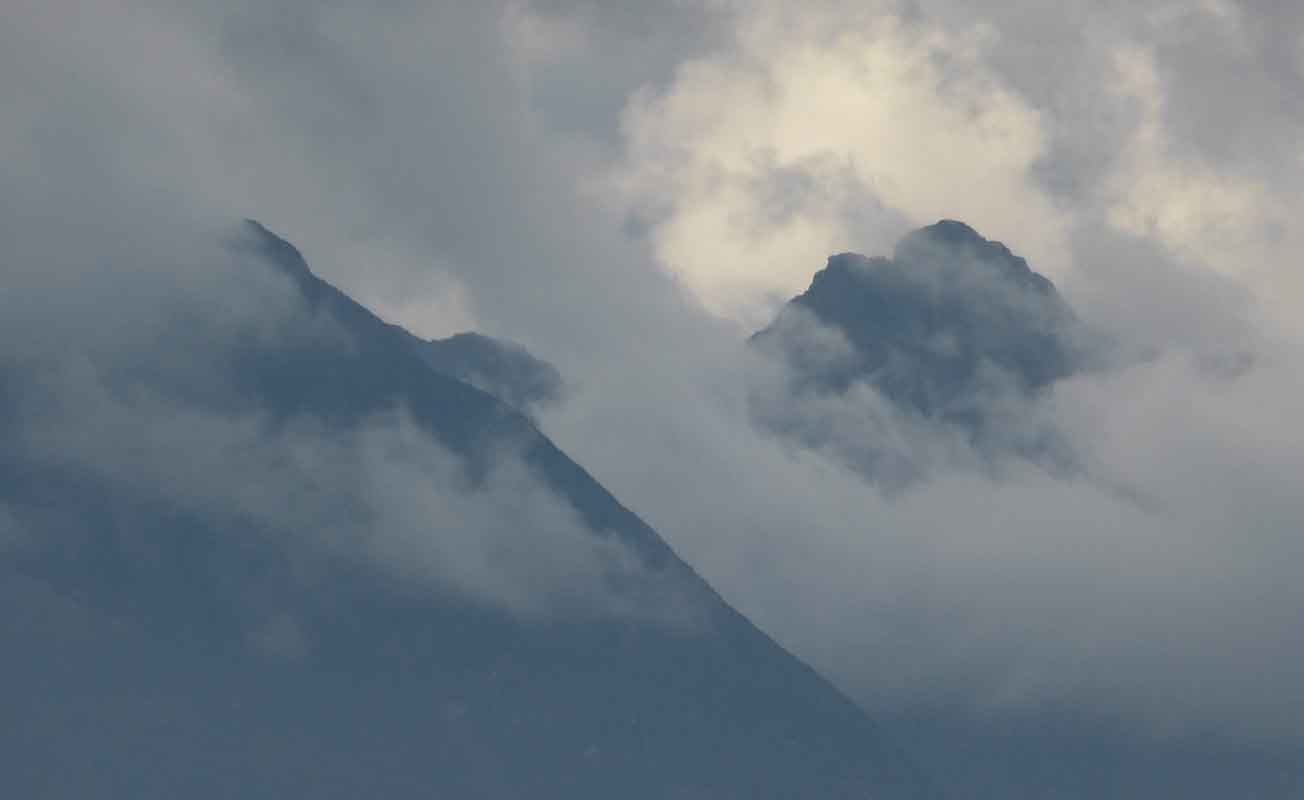 As we went further out to sea and into the Firth the black peaks of Arran broke through swirling clouds, looking very King Kong island like under a shifting curtain of mist and fog. 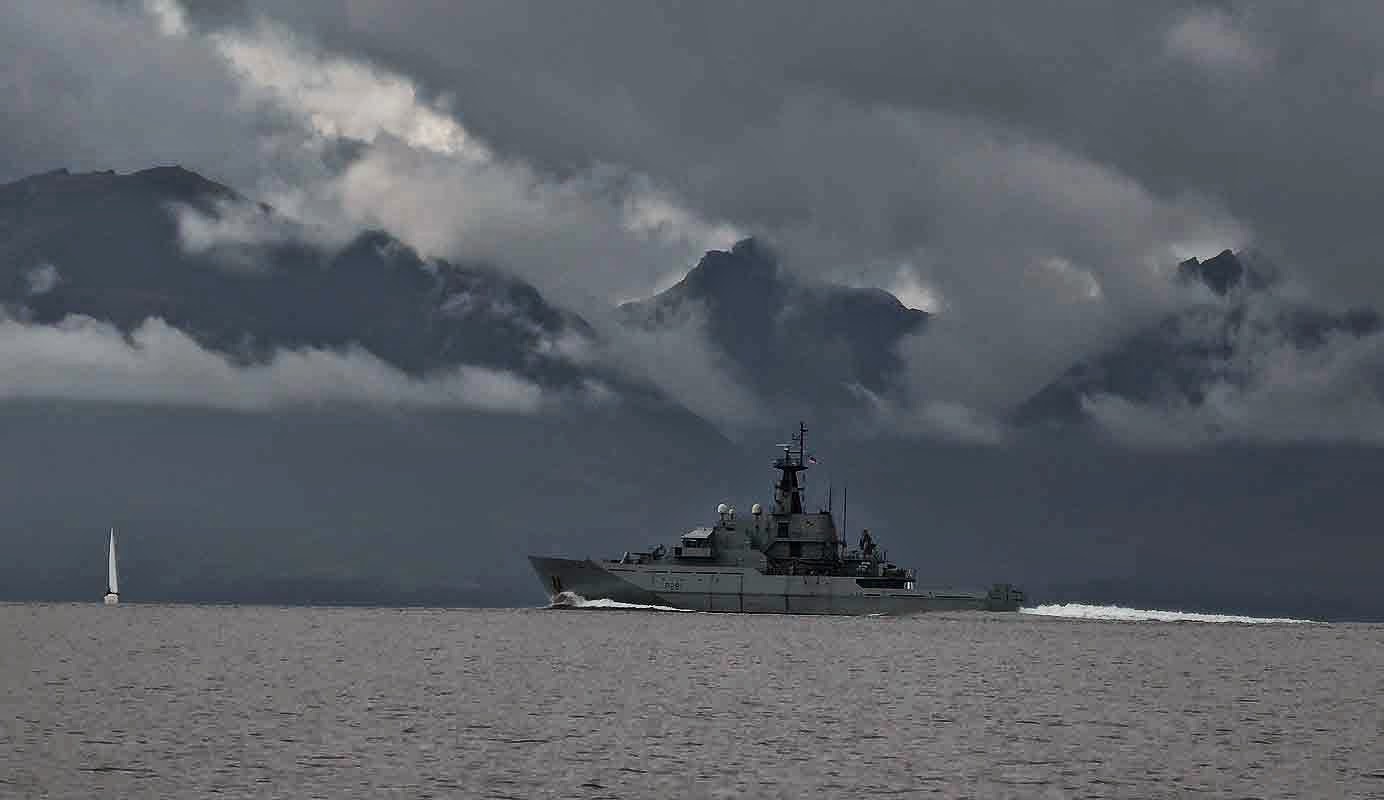 A passing warship added to the slightly surreal setting. A stunning photograph. 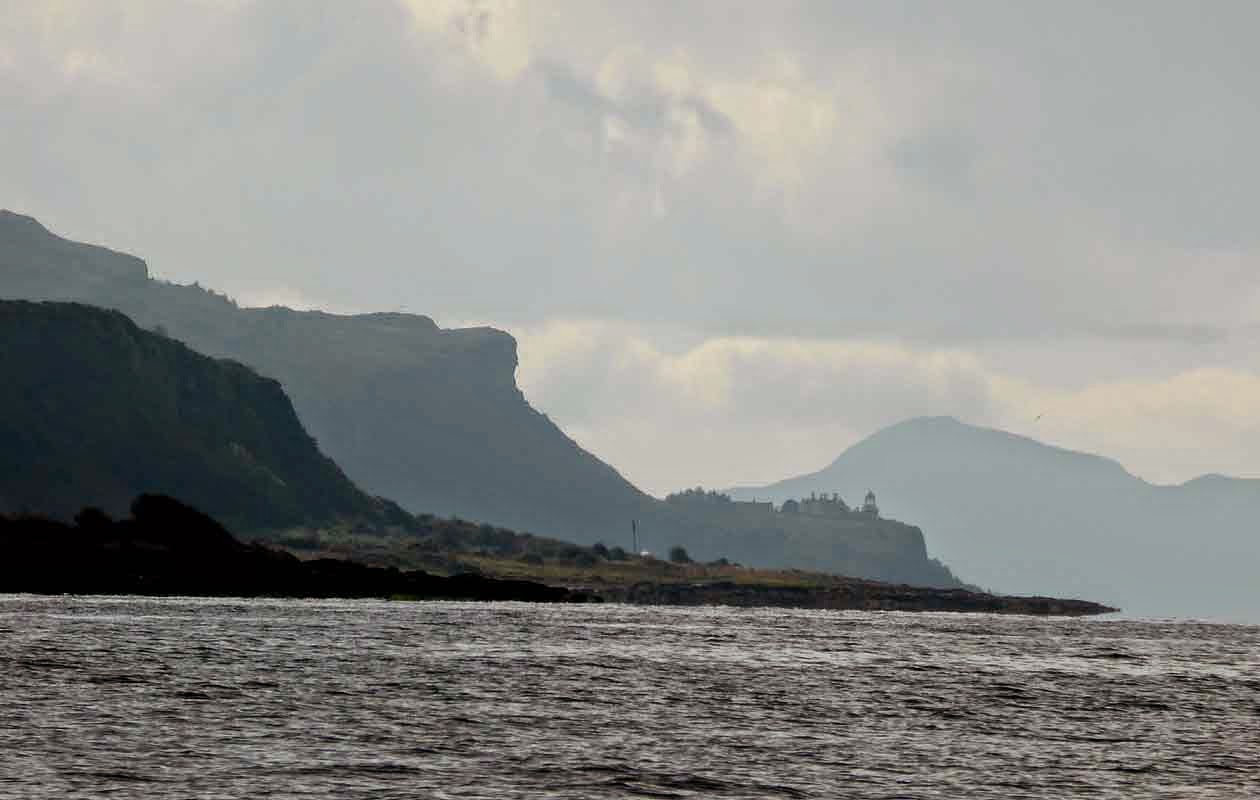 We circumnavigated Great Cumbrae then headed for Little Cumbrae, which remains private and not on any passenger ferry route. It is largely uninhabited except for a small community on the west coastline, centred around the lighthouse at Craig Nabbin, seen here and a house near Castle Island on the other side. There have been plans in the past to turn it into a corporate outdoor retreat, a spiritual centre, and peace zone similar to Holy Isle off Arran but I don't know how far these ideas have progressed yet. 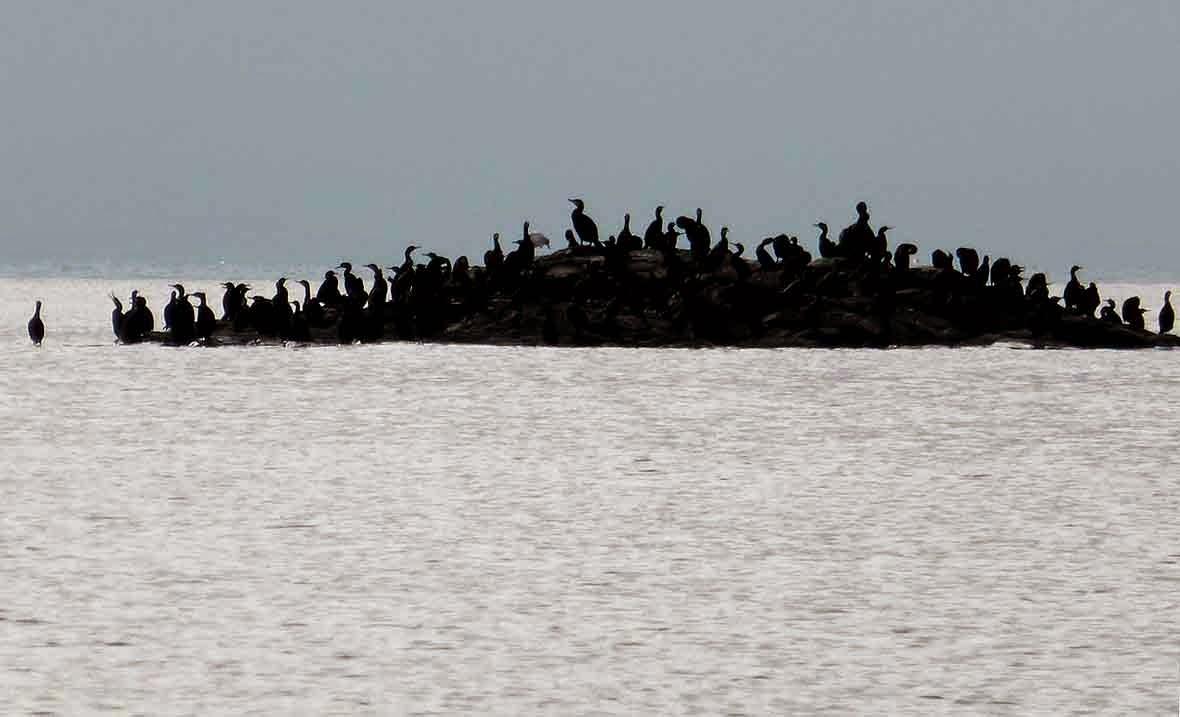 How many Cormorants ( or shags) can you cram on an island? 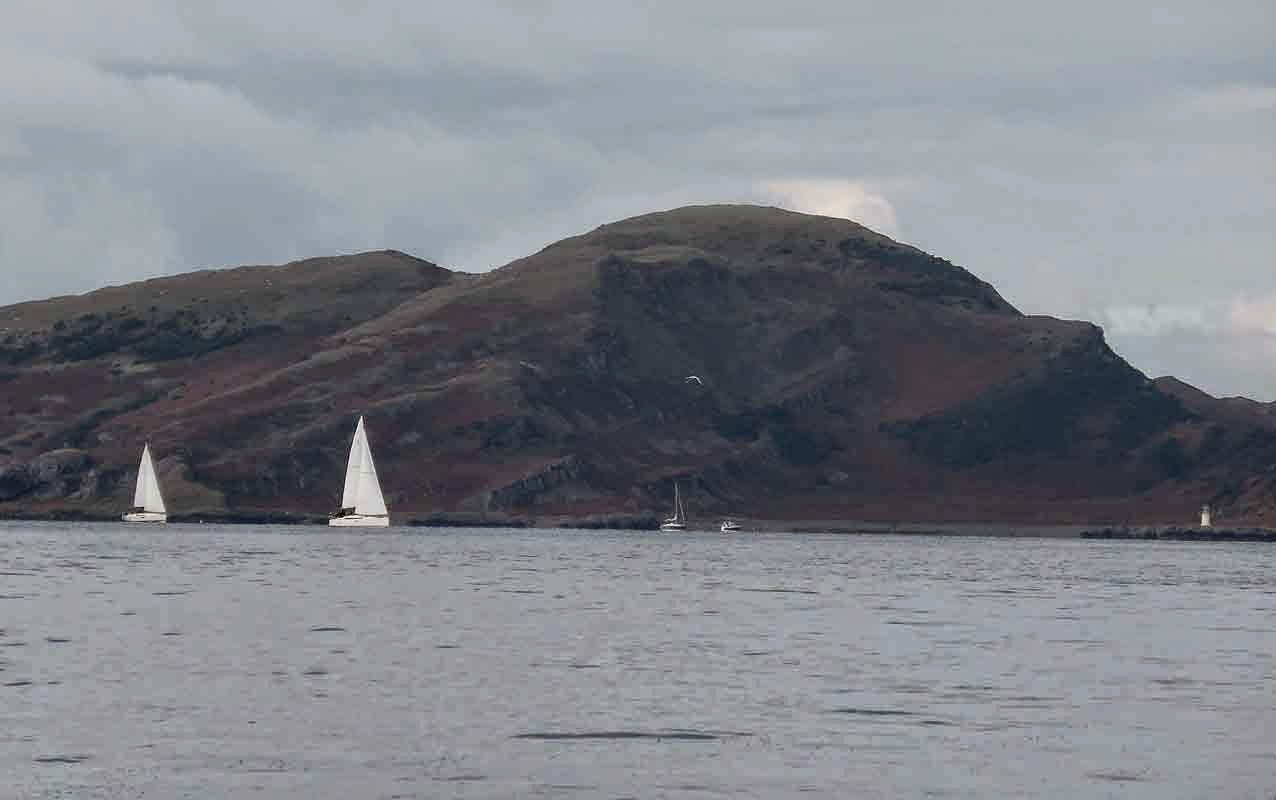 Yachts off Garroch Head on Bute. 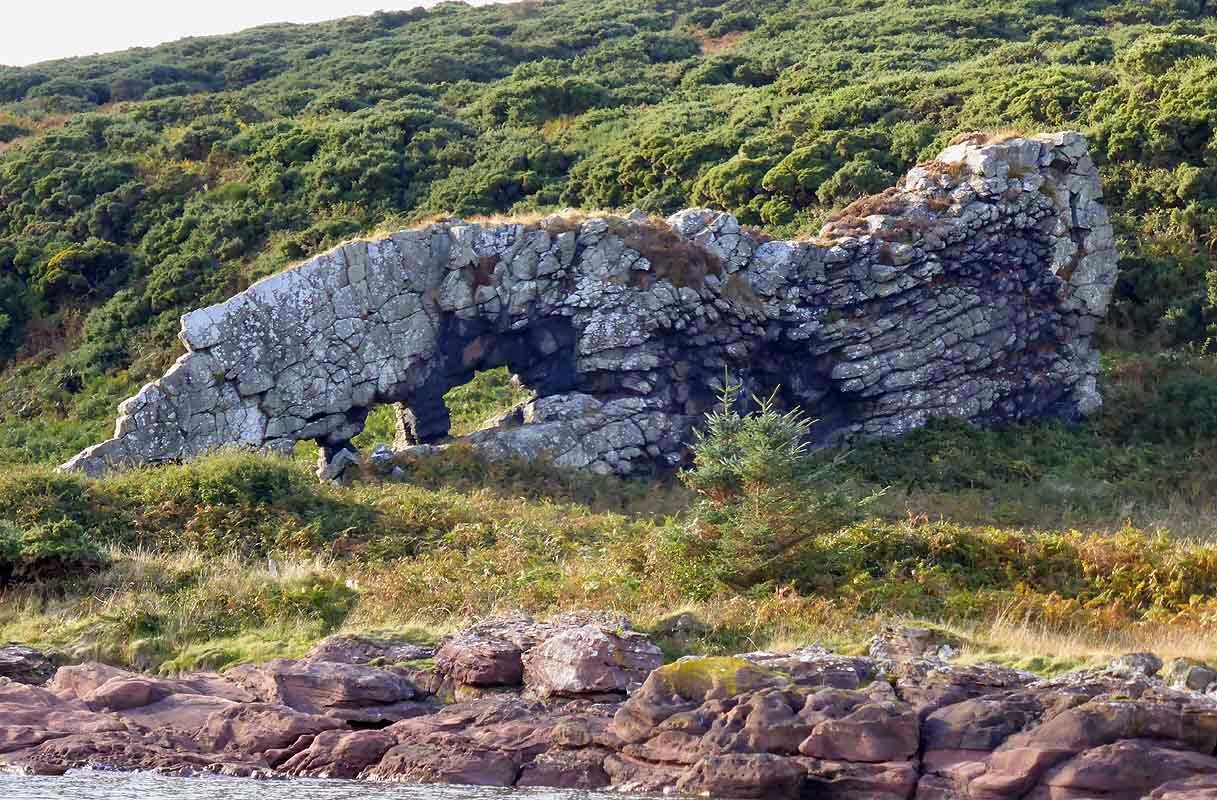 "The Lion" Rock on Great Cumbrae, near Millport. It was probably named from passing boats as it is only when viewed from the sea  that it resembles a lion. You have to use a bit of imagination though. 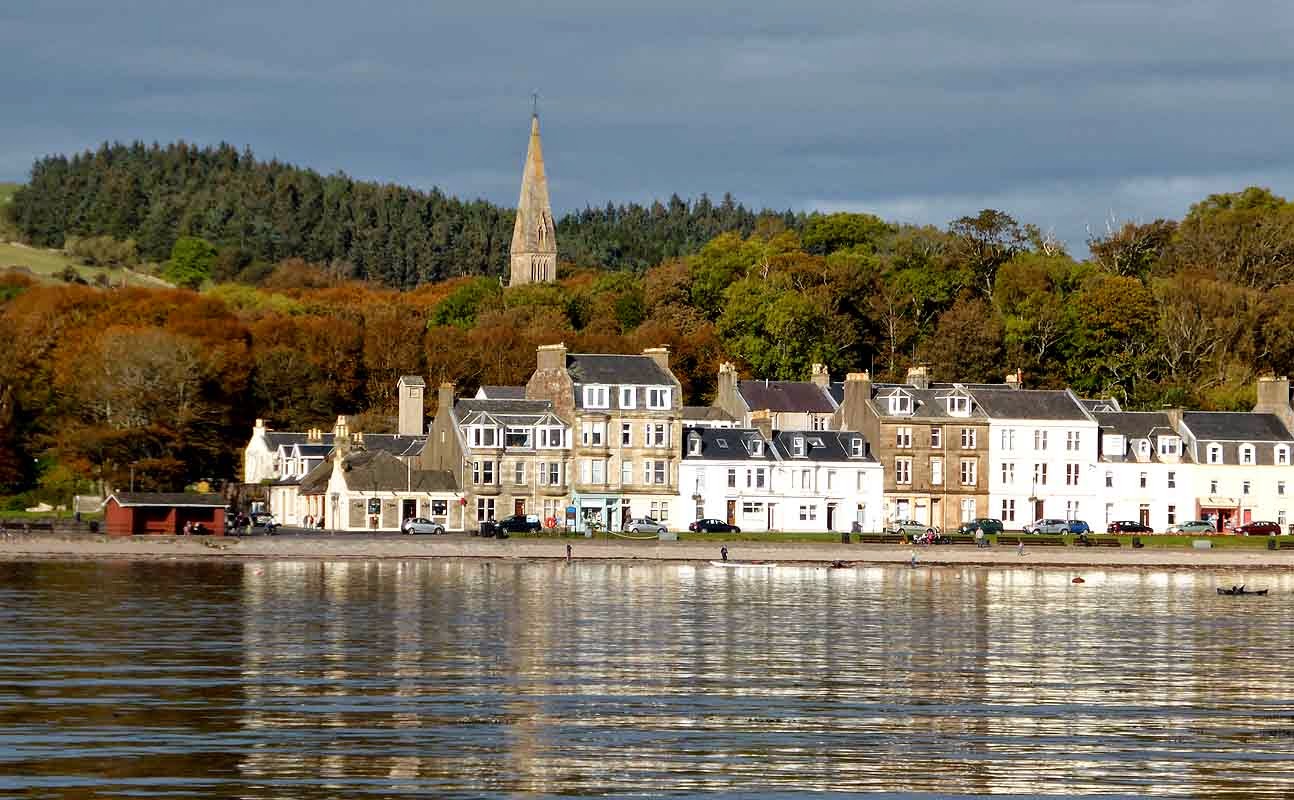 A short stop over in Millport Harbour was now on the cards, and, being a Sunday there were a few families out enjoying an autumnal sunny afternoon. 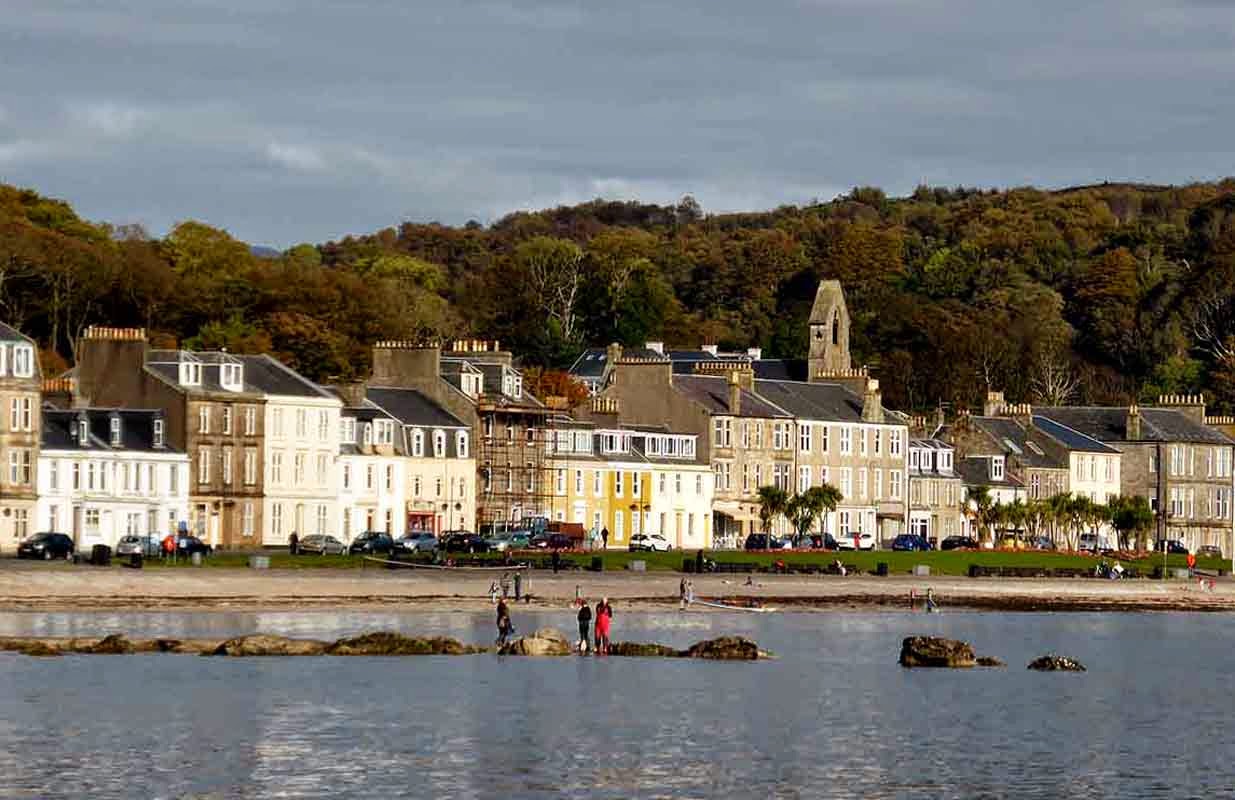 The Captain got drunk in the local grog shop, peed all over the main street without any apparent shame or concern, then had to be carried back aboard in disgrace after snaffling down half a bag of chips that had been left unattended on a bench for a moment by an unlucky child. Don't let the sad look fool you. He's a bad wee rascal at heart! A sailing breed with a long pedigree of life spent abroad ships down through the centuries. 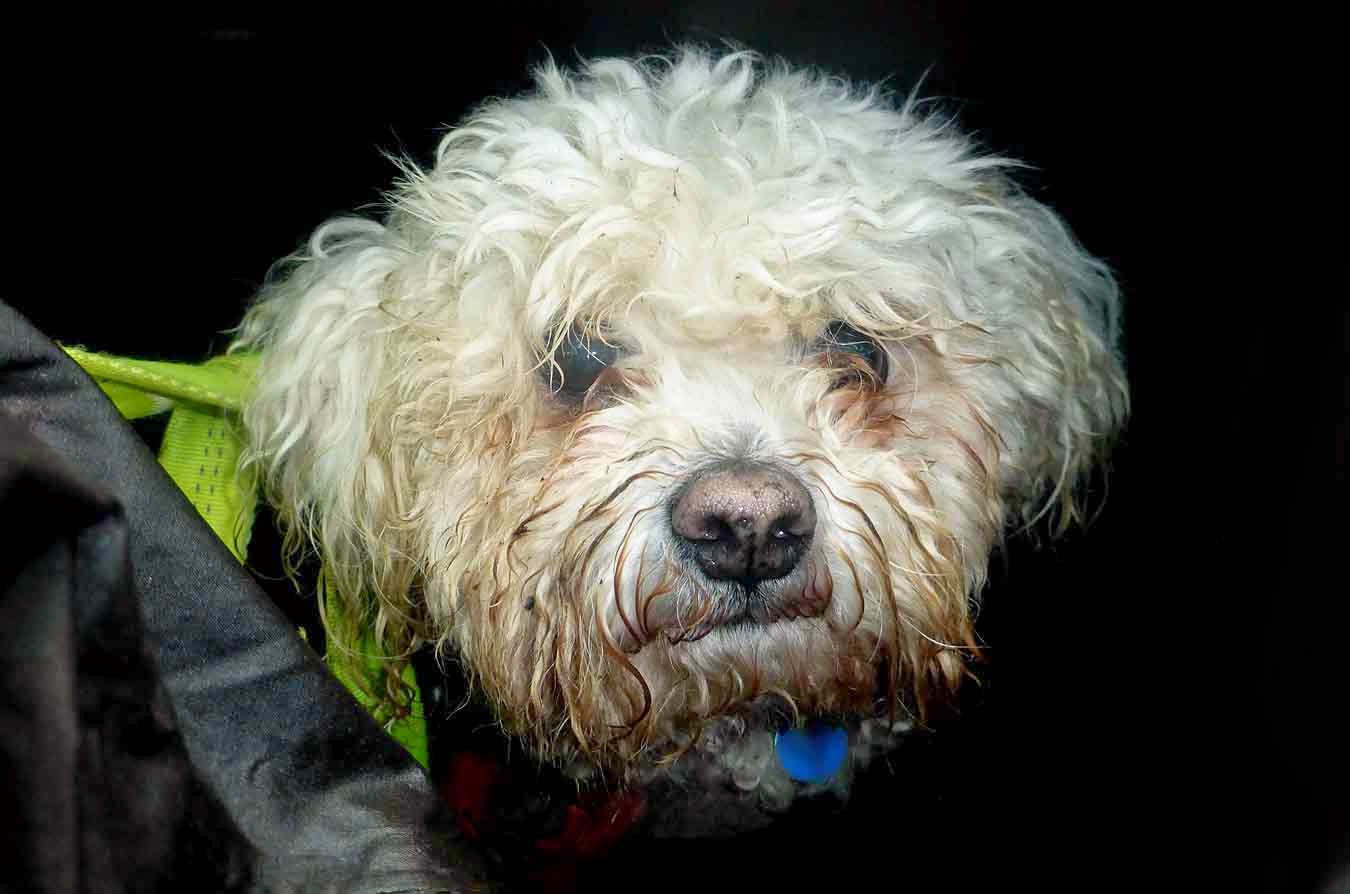 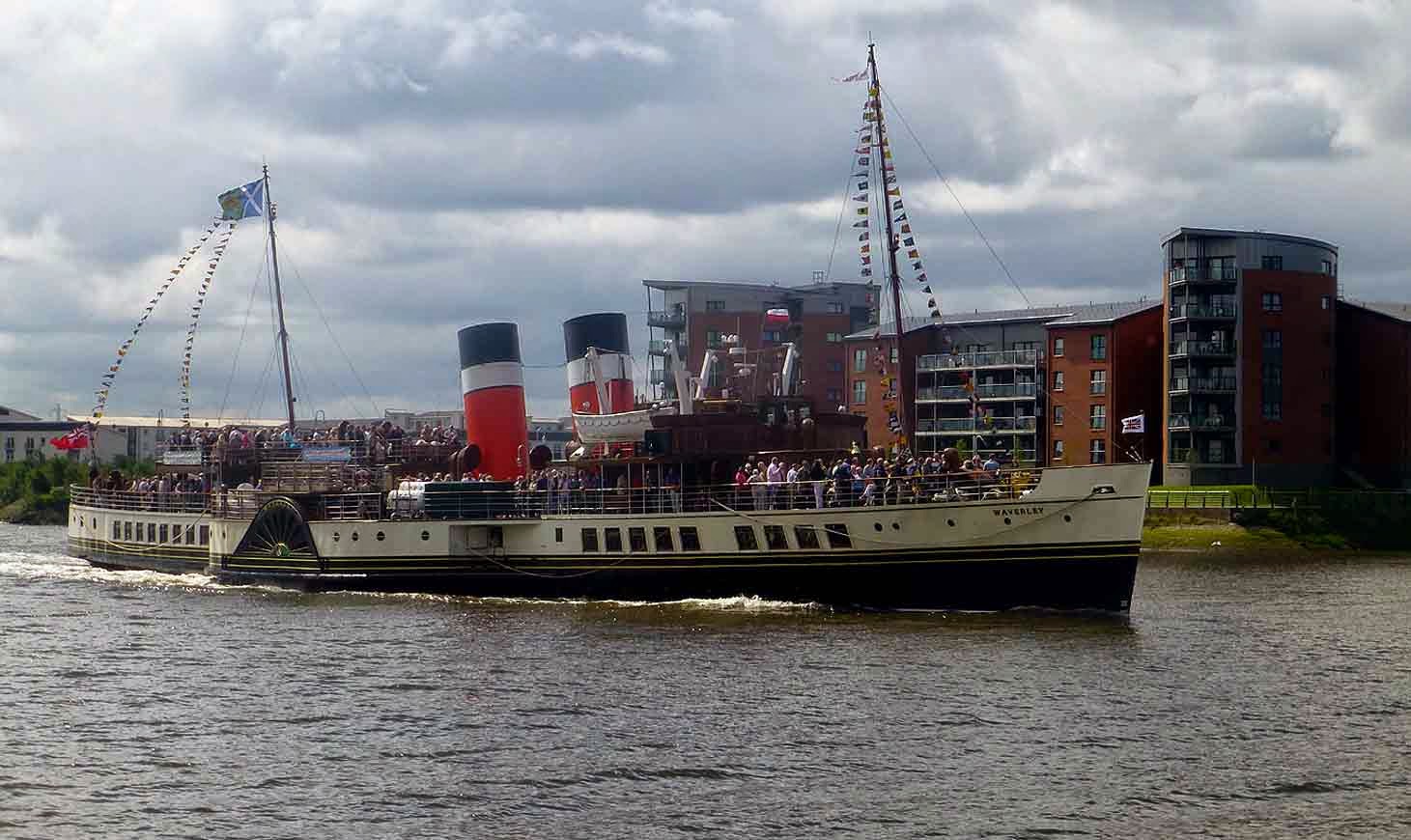 Mind you, having a few drinks and a big feed on a trip "doon the watter" has been a tradition on the Clyde for over 100 years now. 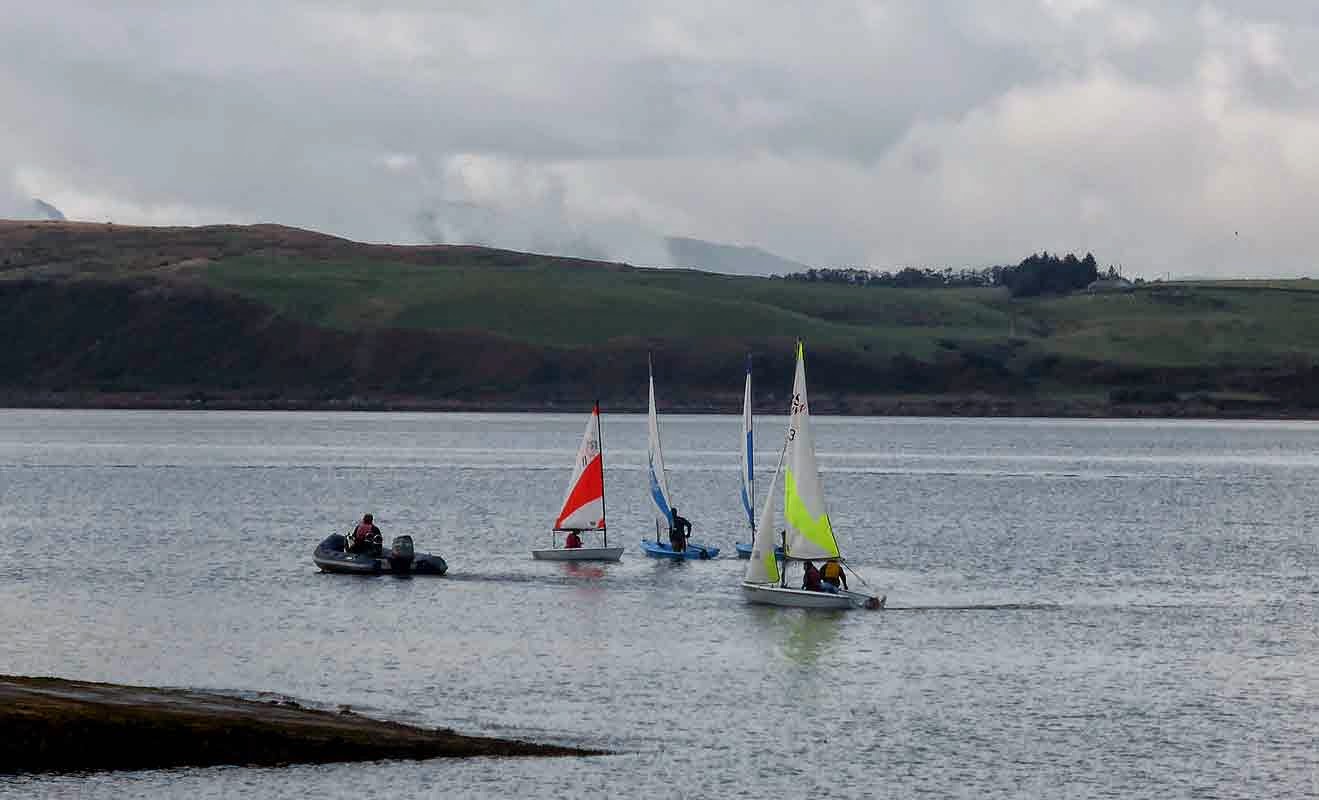 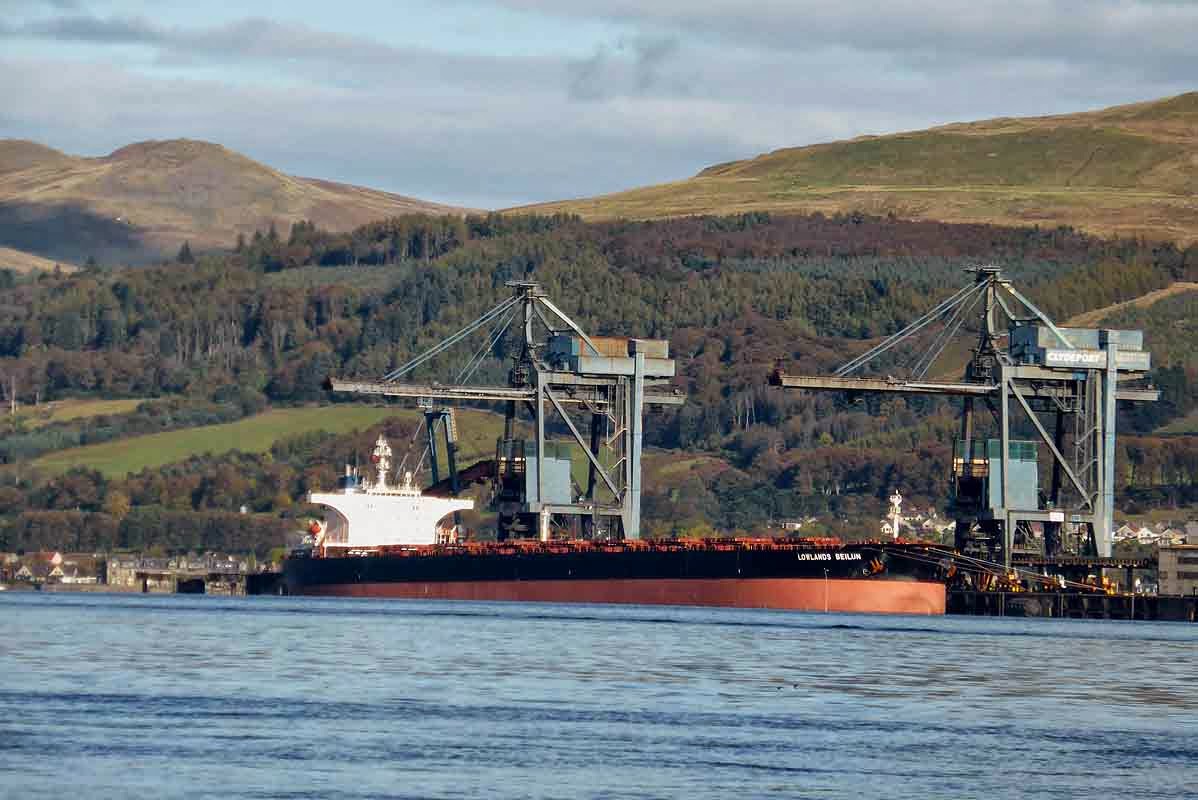 Large ship At Hunterson/ Southannan Sands Pier.
A great day out and thank again to John, Gail and Morven for inviting me along.
Just by lucky coincidence my new pictorial guide book is all about the River Clyde and the Firth of Clyde. It is a mixture of brief history items, some nostalgia, contains information and details to over 80 walks and cycle rides, for both beginners and experienced veterans, and is fully illustrated with 146 colour photographs taken over a 40 year period along the Clyde. It should be of interest to most folk that live or have lived at some point in Glasgow or along the banks of the Firth as it covers many lesser known walks from the Upper Clyde at Lanark to the Firth and its many and varied islands before ending at Ballantrae, near Girvan. The walks and cycle rides described inside are from a couple of hours easy flat exercise around the urban town and city districts to full day adventures in remote locations.
My life long love affair with this incredible area, the largest enclosed estuary in the British isles and the most diverse, should be obvious from these pages. 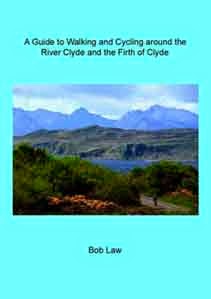 I've kept this photo deliberately small sized here. Apart from being a practical guidebook to many lesser known walks and cycle routes in this area it is also a pictorial journey down the River Clyde from it's source to the sea where it meets the North Channel between the Mull of Galloway and Corsewall Point near Ballantrae, the last walks in this book along the beautiful and little known Stinchar Valley.
At £1:99 on kindlebookstore. Click on link here for a peek inside.  http://www.amazon.co.uk/Guide-Walking-Cycling-around-Clyde-ebook/dp/B00P1IO2SM/ref=sr_1_1?s=digital-text&ie=UTF8&qid=1415294598&sr=1-1&keywords=a+Walking+and+Cycling+Guide+to+the+River+Clyde+and+the+Firth+of+Clyde.+Bob+Law
(colour photos are only available on some kindle reading devices) It should be a good gift for the Christmas market as it is much cheaper than most other equivalent guide books but is packed with walking and cycling suggestions, for anyone that likes exploring this unique area.
It's also the best of the last six years of Blueskyscotland adventures in this district but in one easy to read simple format with index of places including my tips on how to always walk in sunshine outdoors. No really... it is possible. I've been doing it now for six years most weekends so its not just luck anymore :o)
Posted by blueskyscotland at 17:32

LOL to the dog snaffling the kid's chips - was he playing on his damned mobile as usual?

The cormorants shot made me laugh - reminds me of how England will be very soon indeed! (and that doesn't make me laugh...)

When was the Waverley pic from?
Carol.

That's a cracking round trip and some great pictures Bob. I think you're right about the marine mammals being porpoises, they hang around Oban harbour a lot too.

I'd have thought a printed version of your guide would recoup your layout. Around our part of the country any new guide is quickly snapped up.

Cheers Carol,
Two same type war ships actually passed us going on exercise somewhere out in the North Atlantic. The large series of waves they created as they passed proved to be one of the most exciting moments of the trip. Large boats passing close to kayaks was always a major hazard when I was paddling around the west coast islands years ago but was just enjoyable sitting in a RIB.
The Waverley picture was taken this summer for the new guide book photos down near the Renfrew Ferry slipway.

Yes, it was a good outing Jim.
I've seen porpoise families before, close enough to touch in the same boat when they surfaced around us with the engine stopped. Very memorable. Bad dolphins attacking them as they are like little children compared to their much larger ocean going cousins.
It's a lot of work putting a paperback version out and with 146 colour photographs I'd imagine it would be very expensive to produce even at a zero royalties rate. Most books with that number of colour photographs in them are £15 to £25 in bookshops.. usually marked down to half price or lower in the bargain bin, just to shift them. I've sold one paperback copy so far of my first book Autohighography, which I actually think is a better read but maybe that's because I'm older and prefer paper books to read then keep on a bookshelf.
The beauty of Kindle however is that you can produce a guide book loaded with photographs on nearly every page yet at a very low price in the electronic version but I will probably put a paperback version out at some point.
I've decided I'll have to write a shed load of books to actually earn anything from them so watch this space :o(

Amazing photos of an amazing place.
That one of the ship with the clouds, that is a stunning photograph. (I am remembering the one recently with the rock walls around water, do you know the one I mean?..that was one of my favorites!)

That's a great way of seeing these islands Bob. A boat is really handy! I will get your book for my Kindle; bet there's lots of walks in it that I haven't done.

Hi Kay,
Yes, I managed a few good images.
Incidentally, although I watch the news most evenings here the first time I was aware of the Tower of London poppies first circling the walls was on your blog... long before I noticed it getting a mention on the national news in the UK. Well done. Very impressive considering you live on the other side of the pond!

Cheers Neil,
I have been blessed with good friends over the years on trips away.
Hope you find the guide book and photographs useful,well written and composed.