Glasgow In Late December. The Art Of Darkness

An obvious pun on a classic book but it suits this post. Much of the month has been either rain or grey murky weather so I've had little inclination to go up hills and get soaked. However two days over the holiday period stand out, as perfect inversions occurred over Glasgow and the surroundings and I just happened to be there to capture it all. 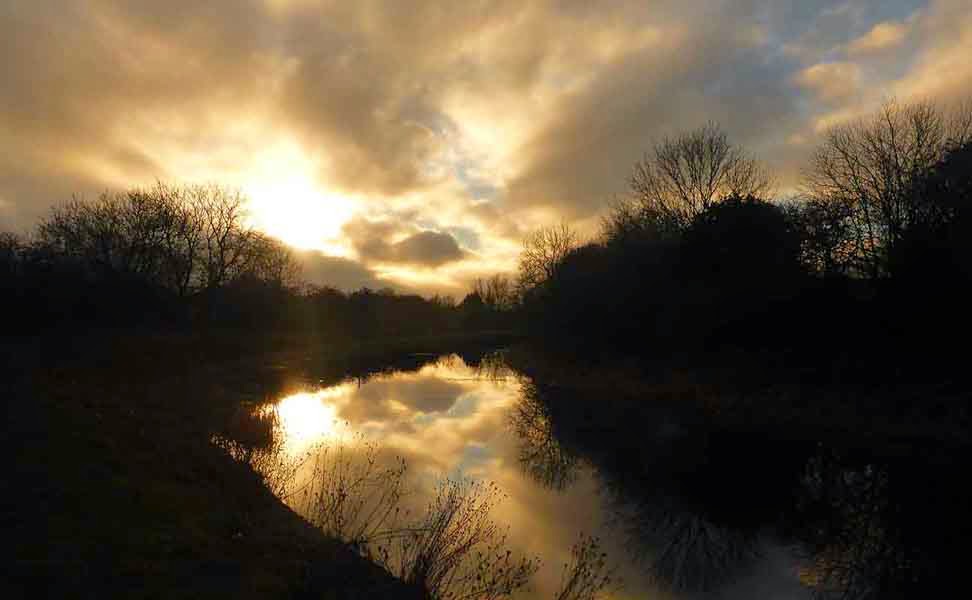 ALL PHOTOS CLICK FULL SCREEN
Cycle ride along the Forth and Clyde canal at Blairdardie to get something in Clydebank. As soon as the sun dropped the temperature did as well and it felt well below zero. Bike is in the cellar now for the winter probably. Me no like icy roads and hard falls on tarmac these days. 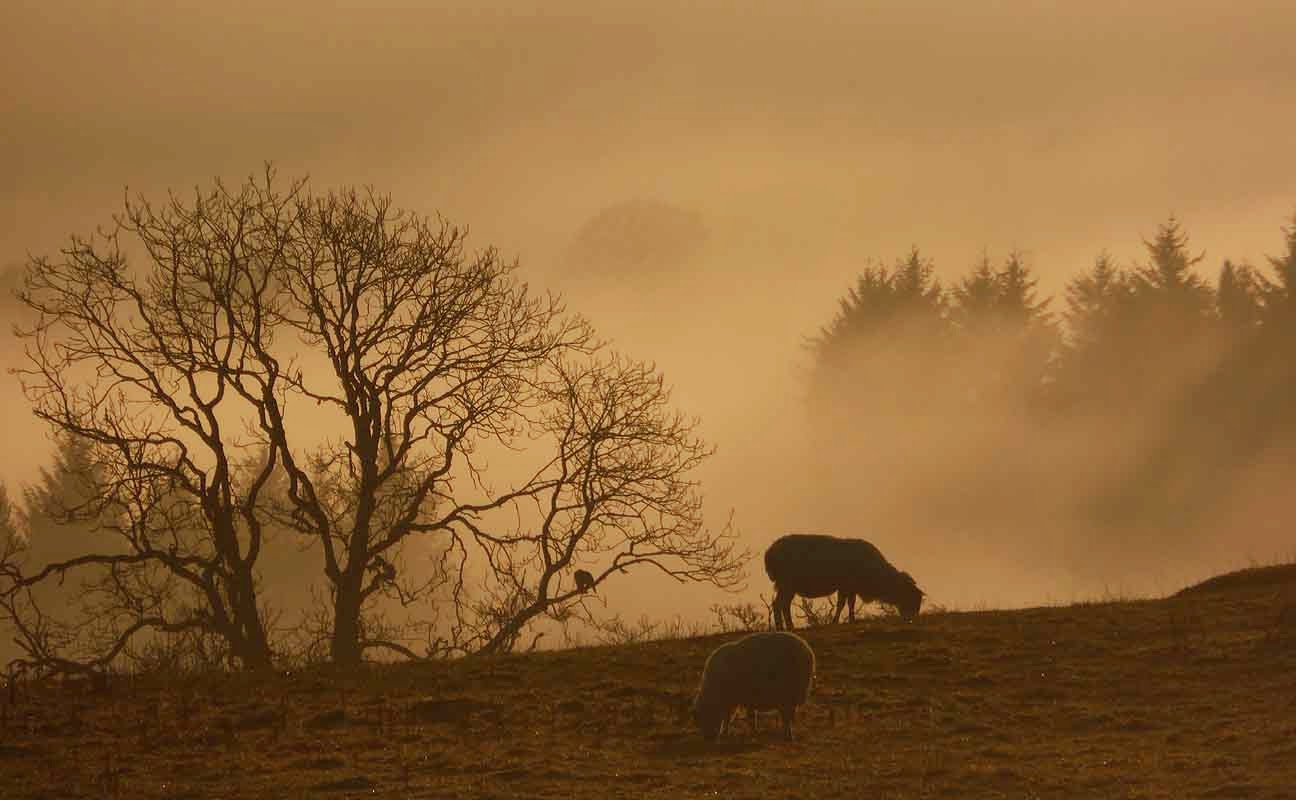 As there was an inversion over Glasgow's low lying districts I knew from previous winters Mugdock Country Park had a chance of being clear as it sits on a ridge between the Campsie Fells and Glasgow. Same area as last weeks post but very different conditions. 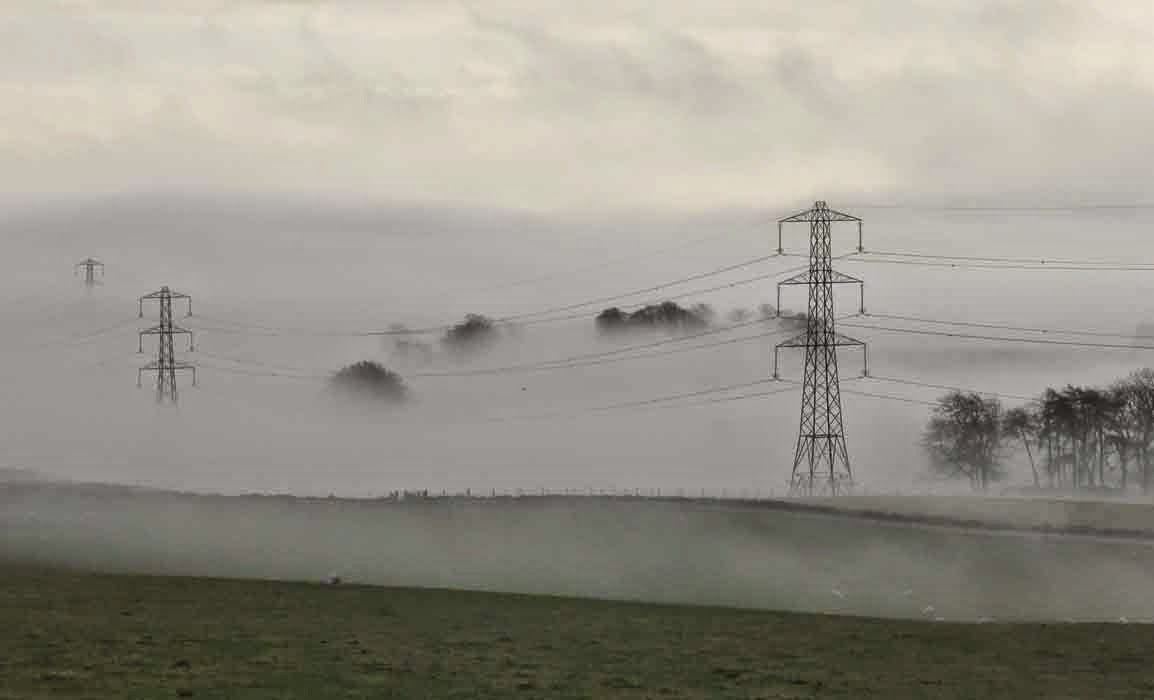 Craigmaddie Muir and a hidden Glasgow lying under the murk. It was a murky and fairly surreal mist-land over most of the city. 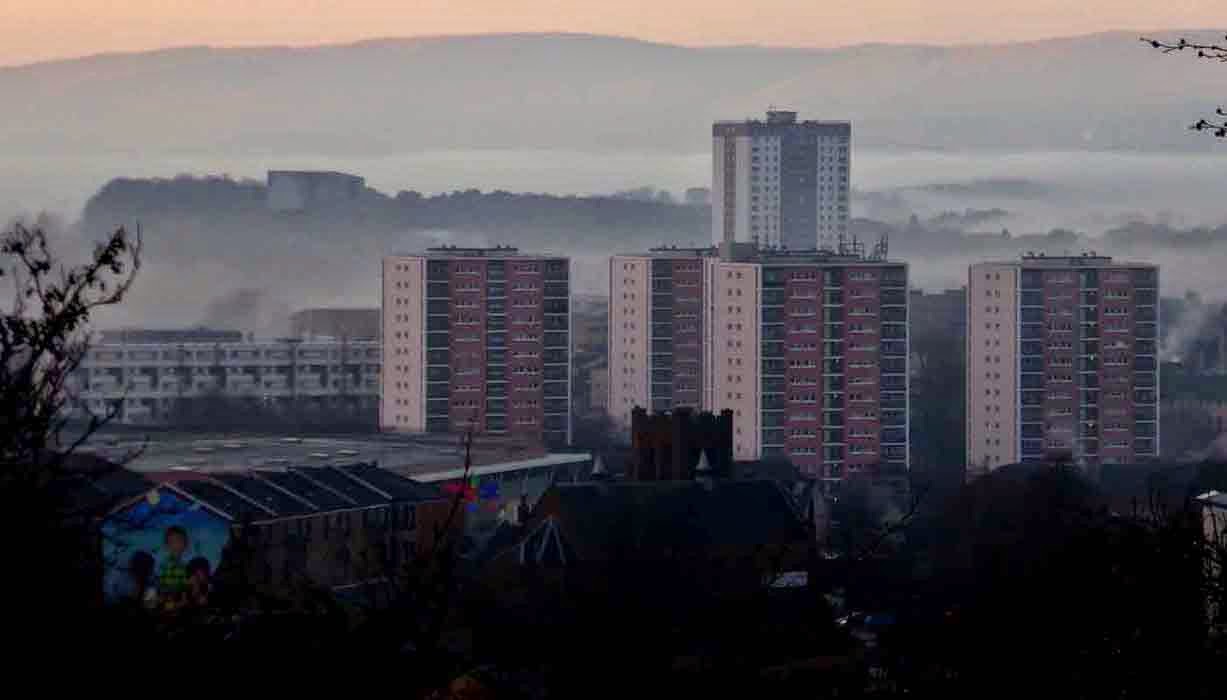 Maryhill Hi Rise Flats sticking up above the clouds.Wyndford district and the colourful gable mural on Maryhill Road. Fairly hazy as the mist was swirling  around Mugdock which was just above the layer by only a couple of hundred feet. Dawsholm Park is the wooded area left of the Hi Rise Flats. 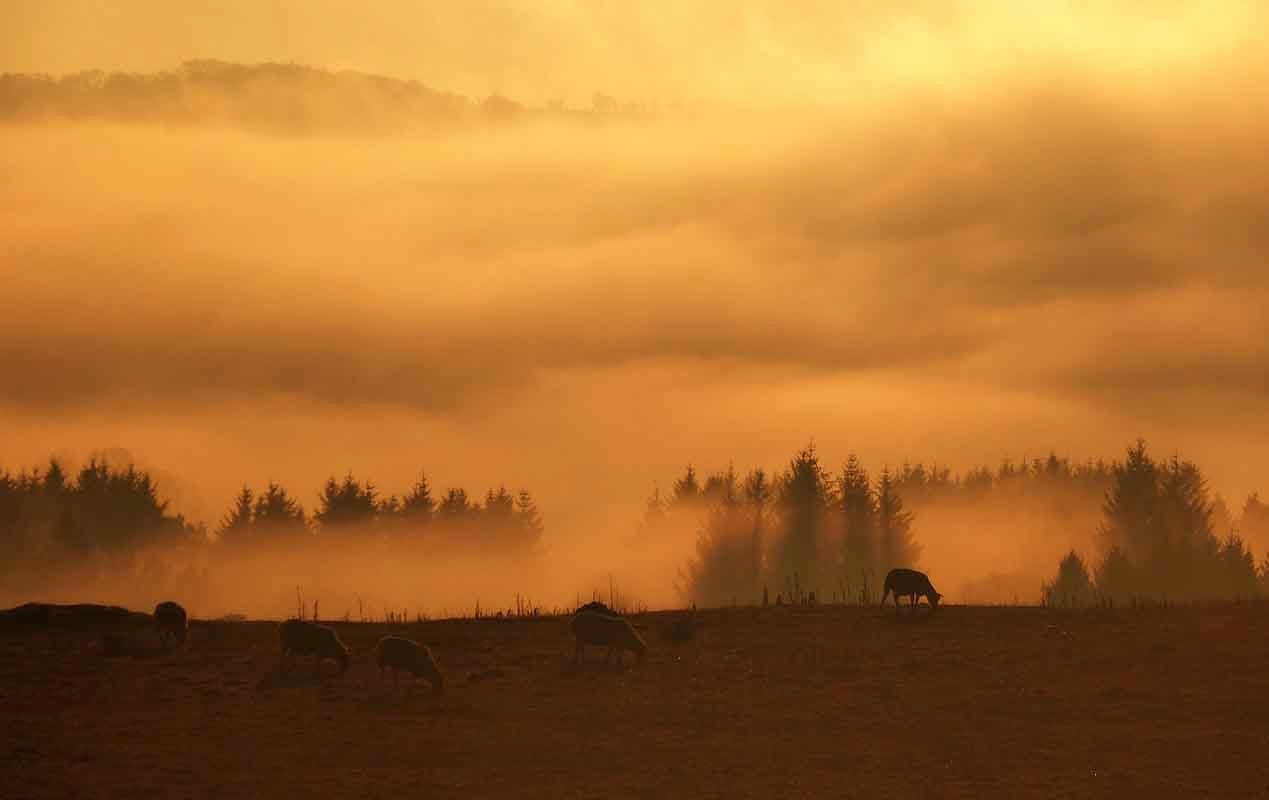 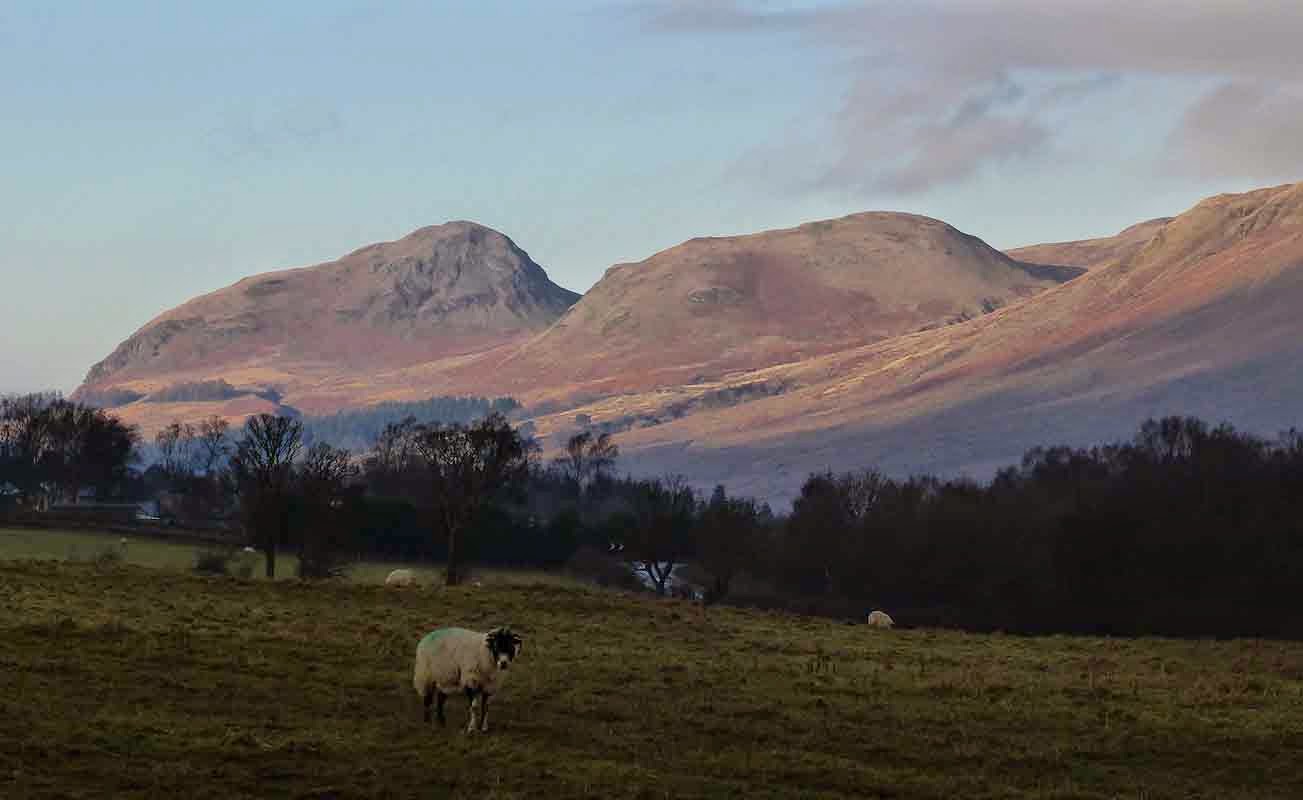 The weird thing was in the other direction the hills slightly to the north, like Dumgoyne here, were clear. 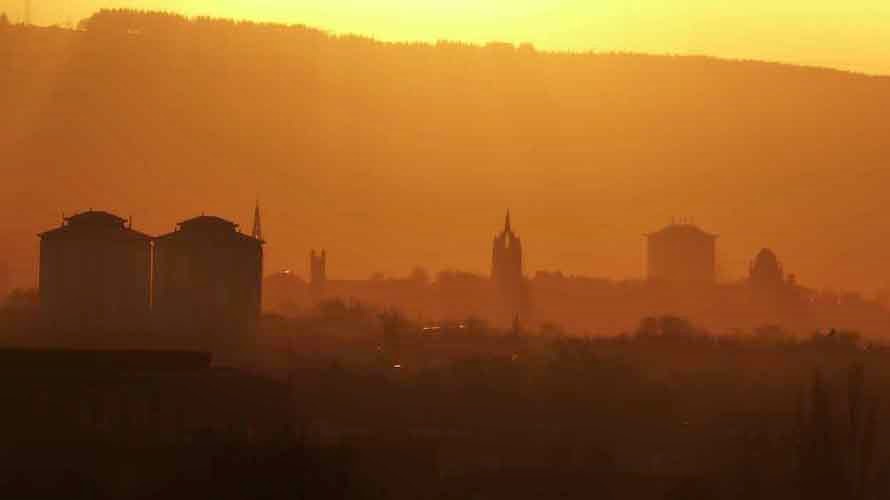 Paisley and the Gleniffer Braes. You can see the Coats Observatory and Church Spire sticking up here. 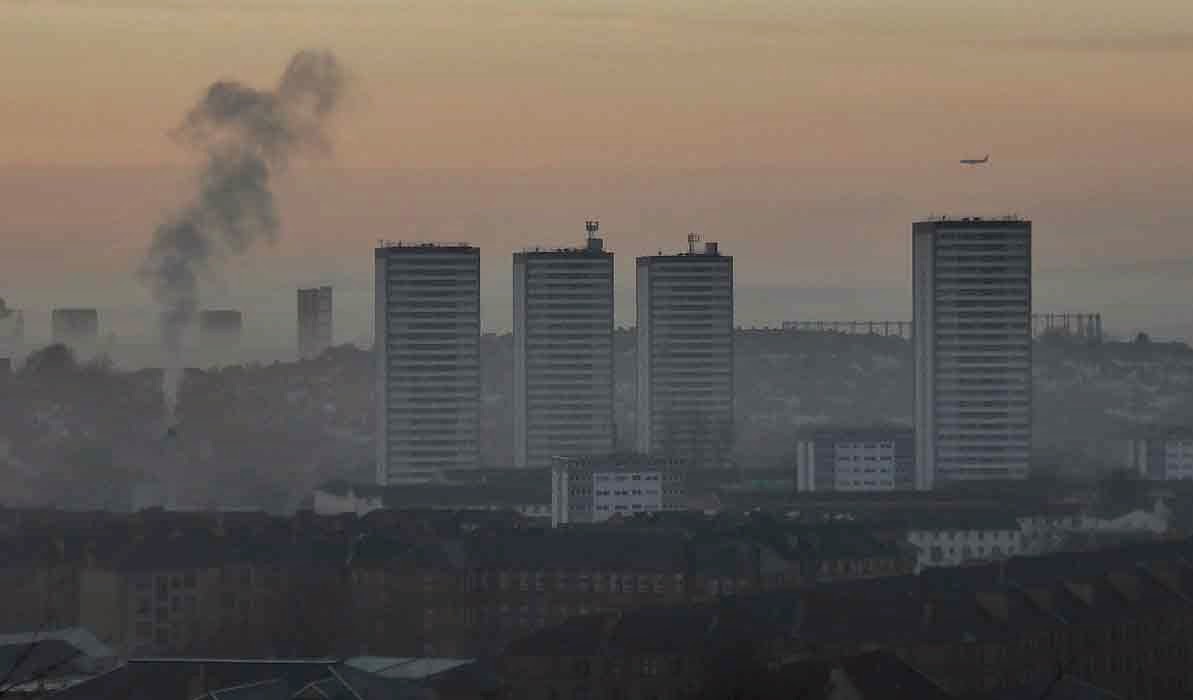 Looking North West from the flagpole summit towards Anniesland Tower. As I could see Ruchill Park was just clear of the murk I decided to go there for the sunset. Ruchill park at night used to get a pretty grim reputation for gangs after dark but as it was around minus five degrees I thought it would be safe enough and so it proved. Parking available on Murano Street, near the park gates and new flats. It has great panoramas over the city which is why it is included in my latest book... yet to be published on Kindle. 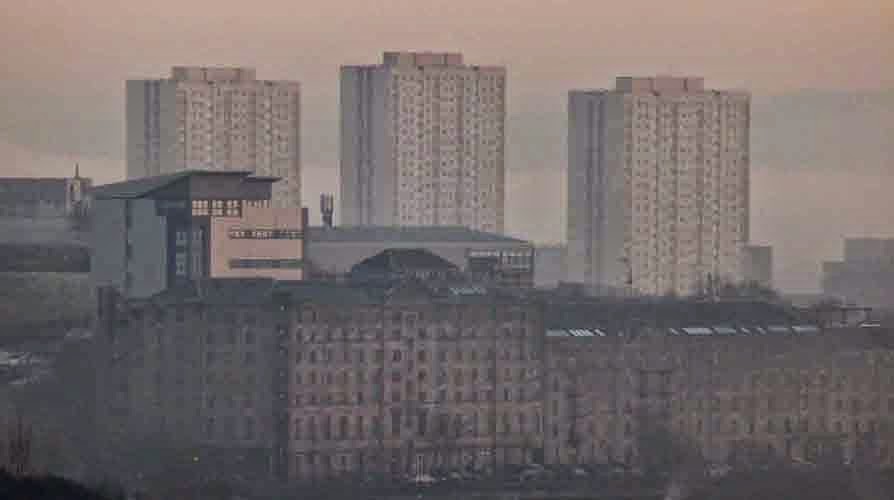 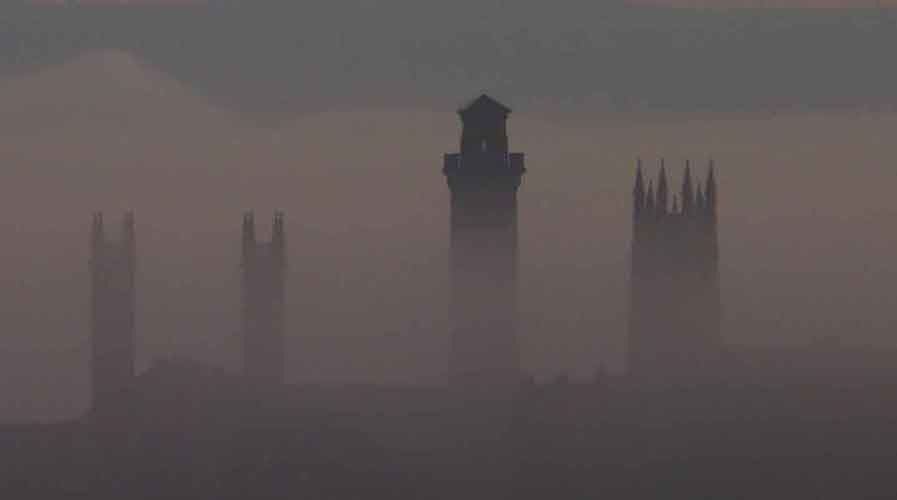 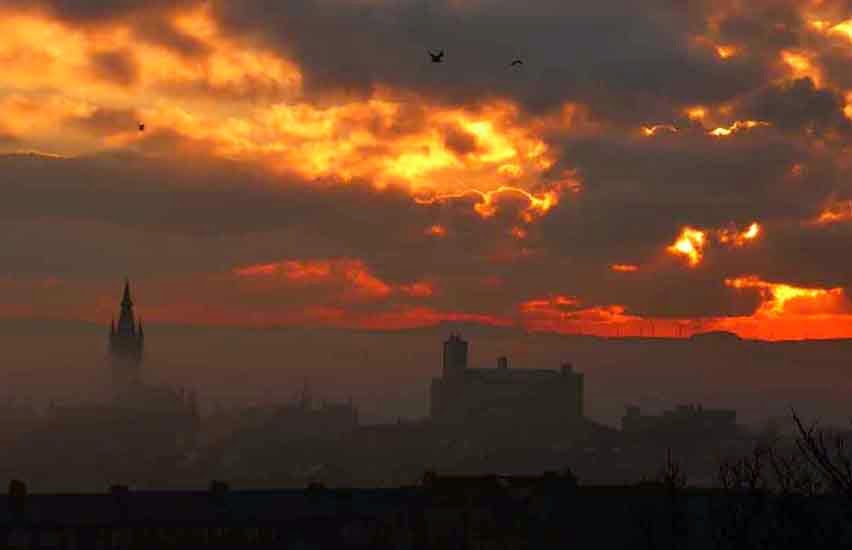 What I was really here for was the sunset and misty conditions often produce good ones because of the frozen moisture in the air distorting the spectrum. A fiery red or orange sunset is common at this time of year. University of Glasgow. 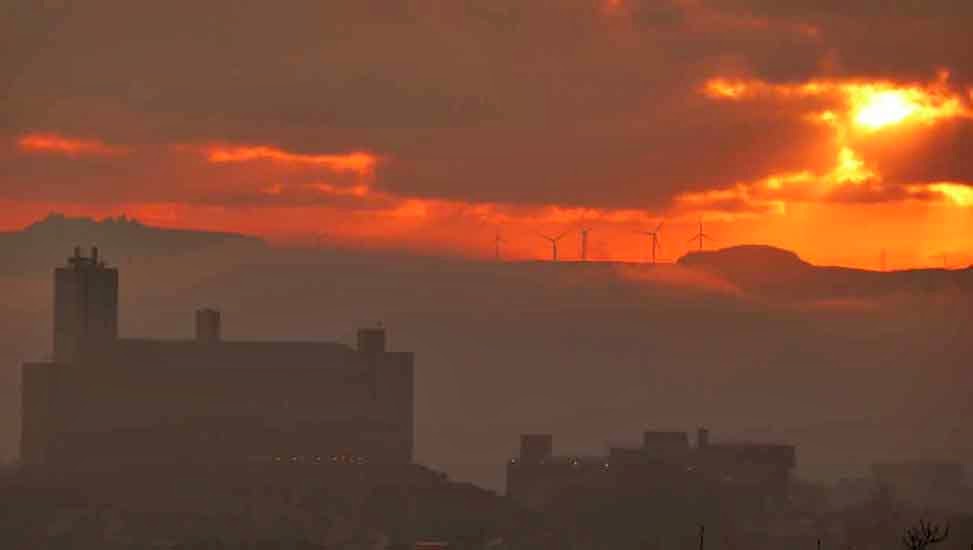 The Sun dropping lower. Ra Descending.(I usually say at this point I,m a follower of Isis (ancient Egyptian sun worshipers) but folk might get the wrong idea. 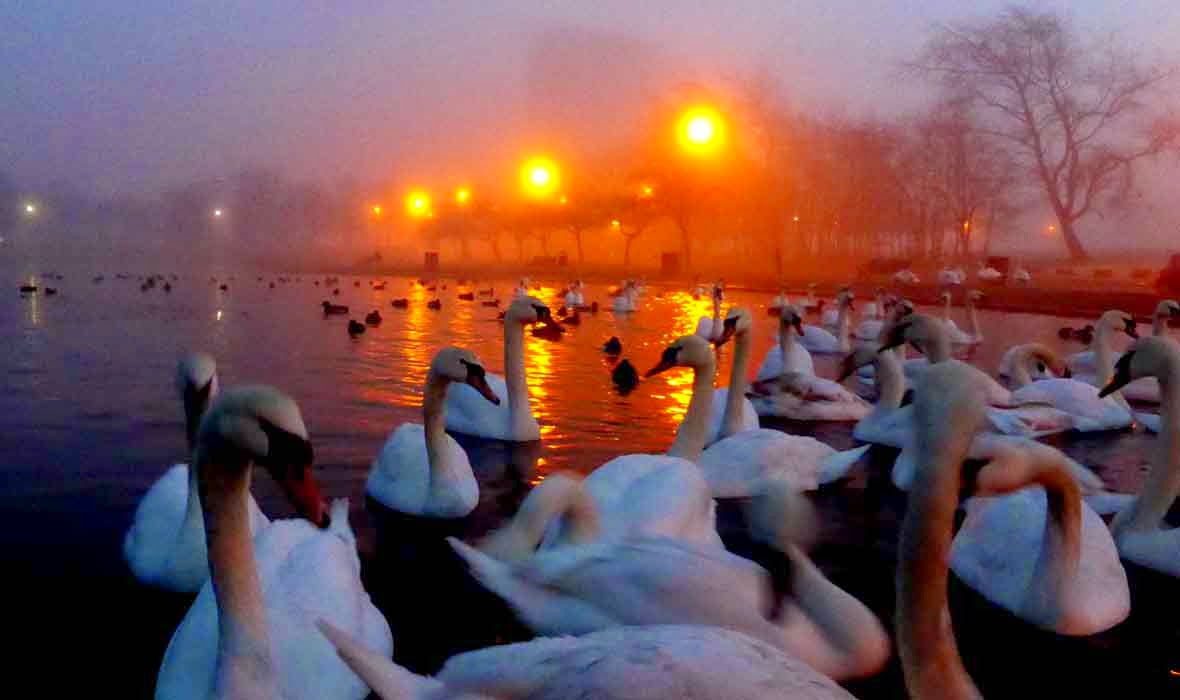 On the way back home I stopped off at Knightswood Park as I already knew it had great night time potential from previous visits here in the dark. I wanted to get beak to beak close ups this time so I sat down at the pond edge and waited for them to come to me. Judging by the plaintive pecks they seemed to be hungry as folk probably haven't got as much spare cash these days. Mind you mouldy or constant white bread is probably as bad for them than no bread at all as it makes them sick after a while. The wildlife islands that they recently built in the pond, presumably in part for nesting on or so they wouldn't get frozen into the ice in hard winters are hidden under water thanks to all the rain. If they keep paddling around constantly all night it usually stays partly ice free. 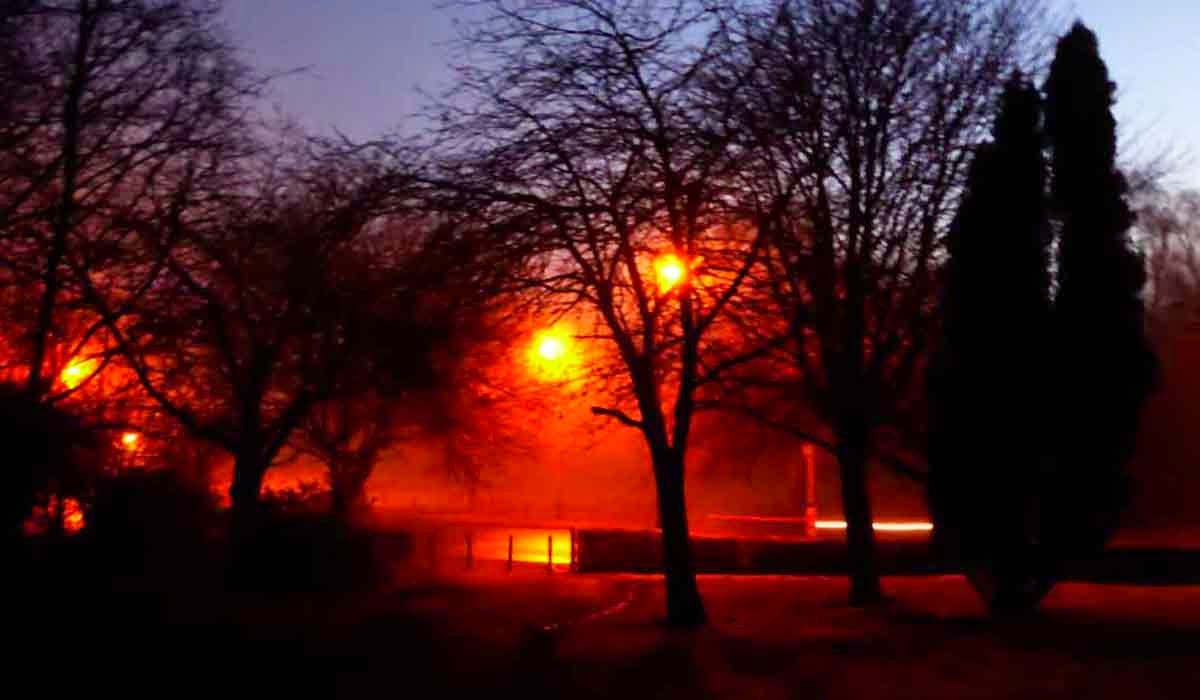 A spooky scene. Personally, I like wandering around on a dark misty night. Very surreal and atmospheric and you can hear anyone coming long before they see you.Altered sound and movement changes the game to a whole new level. Great conditions for creepy crawl work. 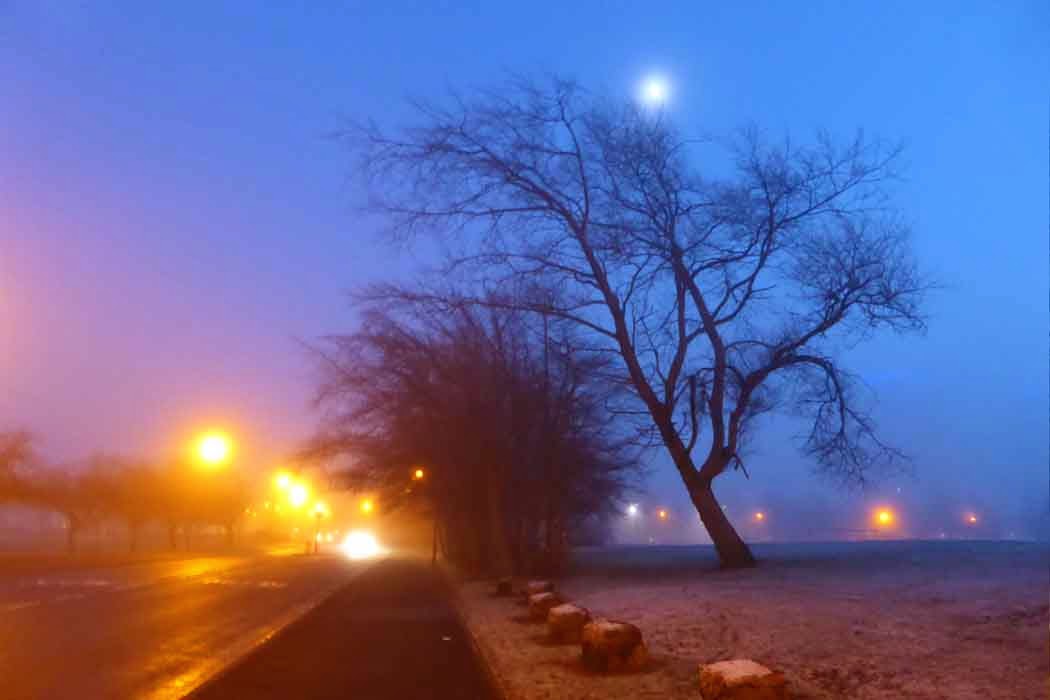 And so to bed. (There is something very weird happening with the photos here in this post as they have perfect definition and clarity full screen on my computer before I post them on the blog then they get all mottled in places on here, even when reduced in size. Mist on the lens doesn't help as the air is constantly damp below the murk.
As I put a lot of time and effort into my photographs and wanted this post to be special I've now exchanged the bad, mottled photos for a better updated set. 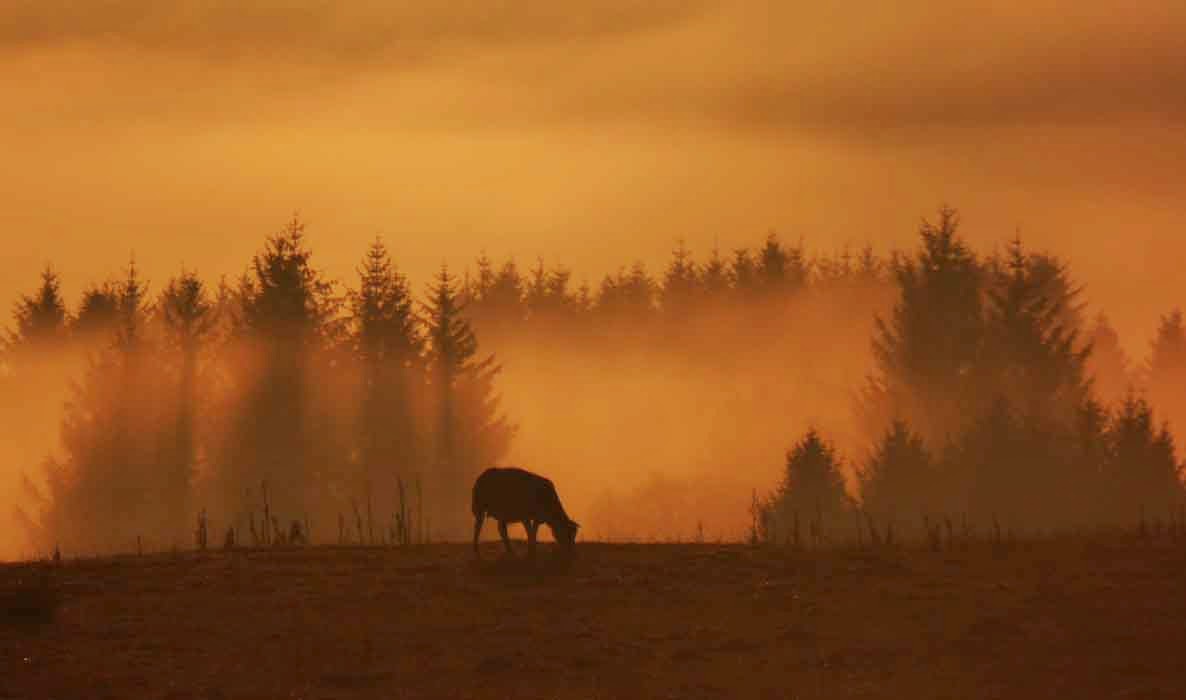 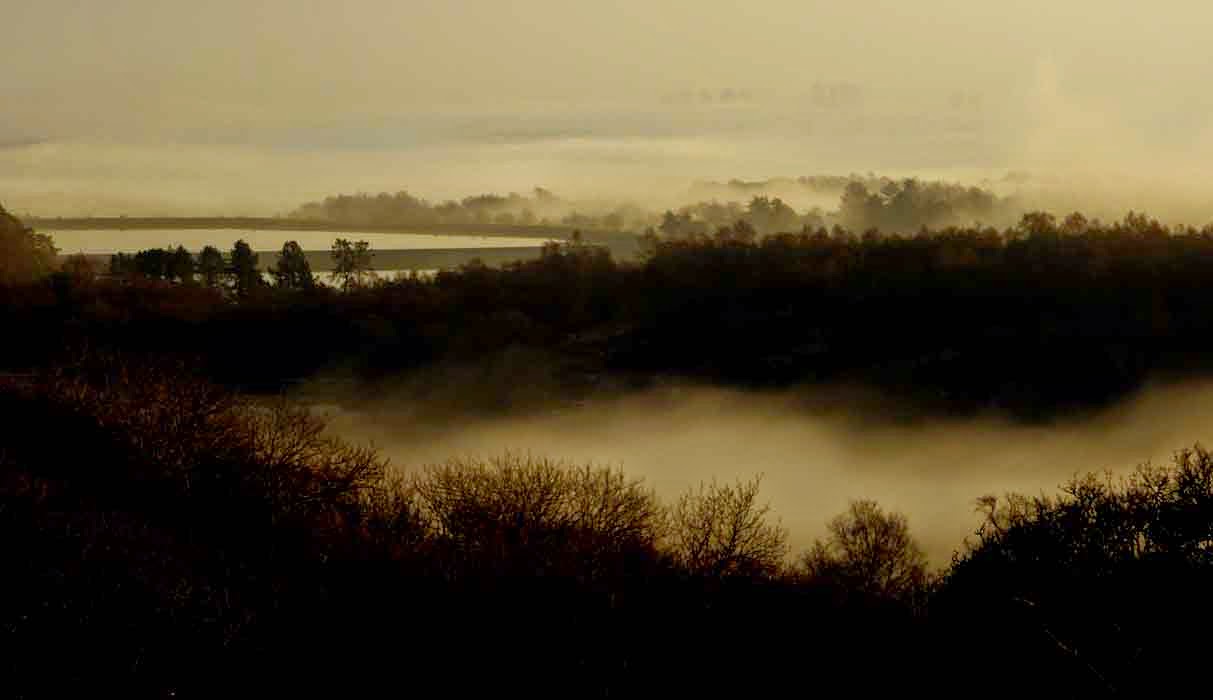 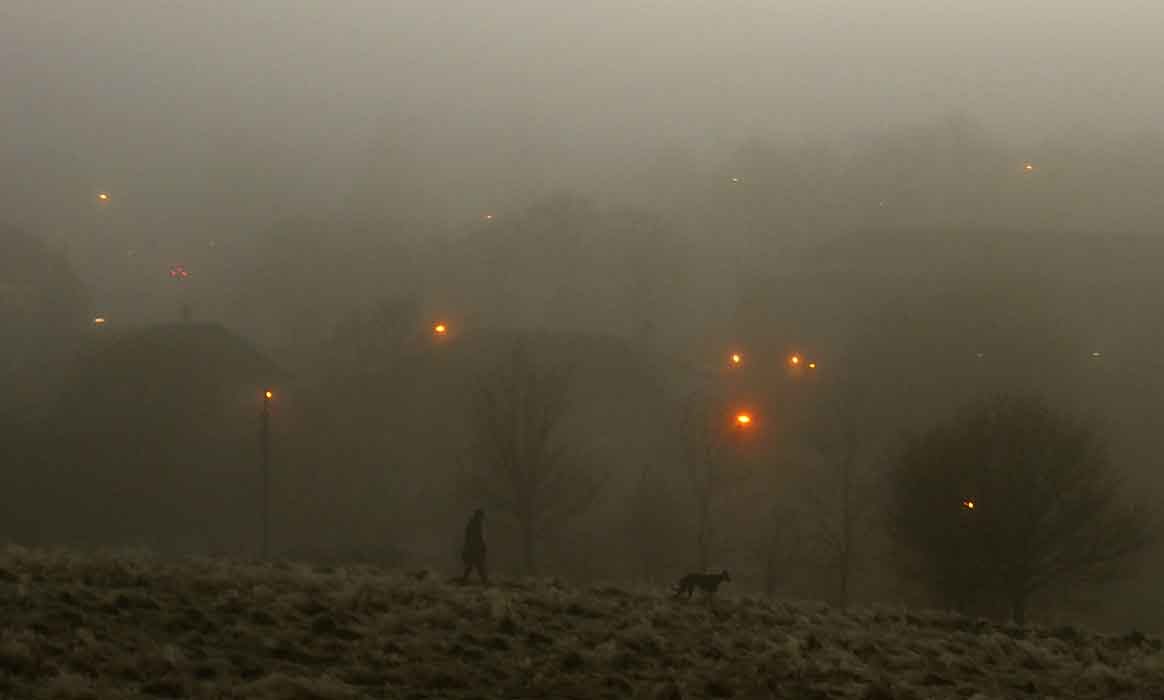 Dog walker under the murk layer. 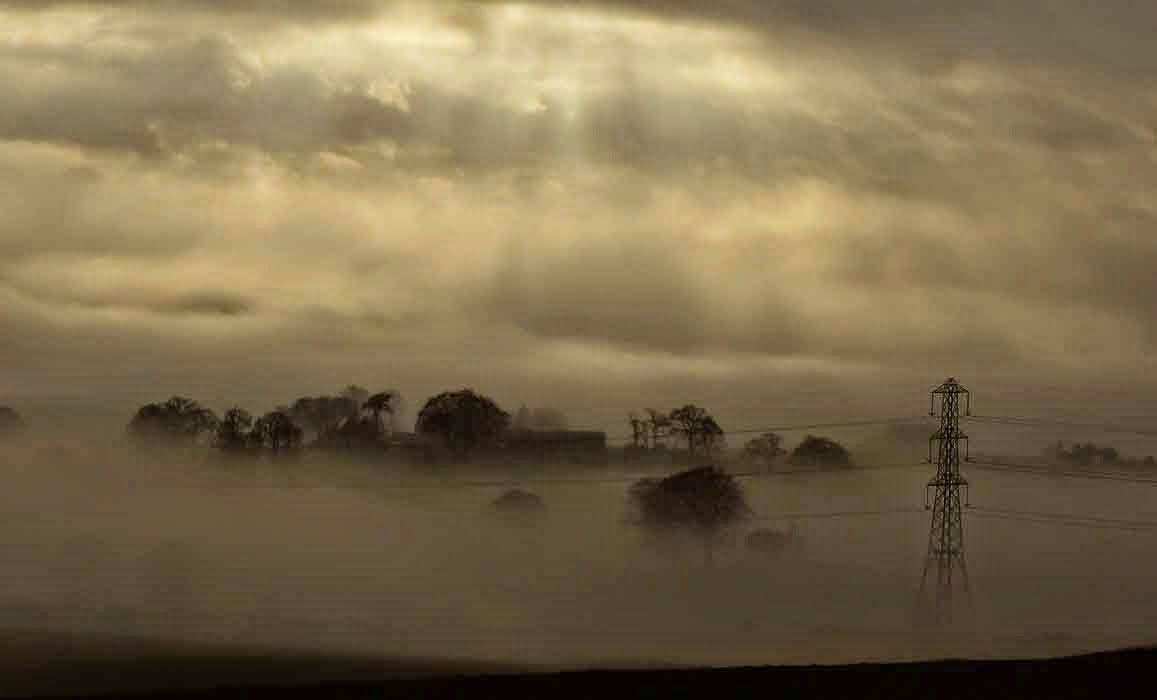 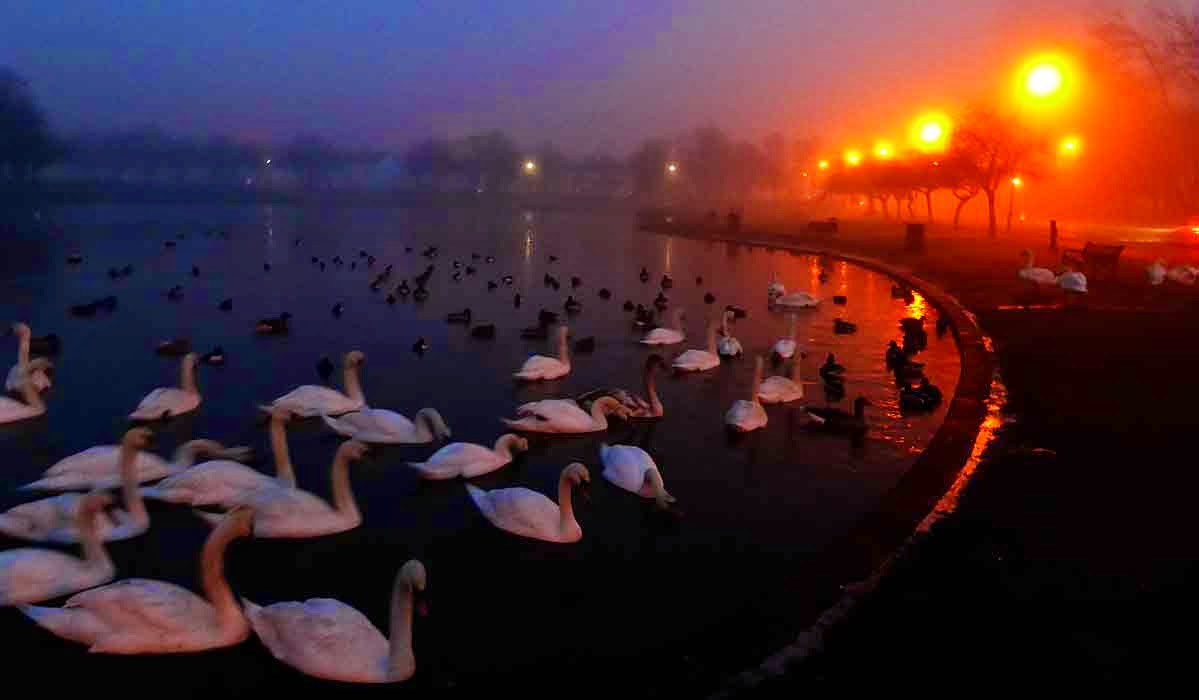 Found another great video of Catherine the Great. Most top climbers still regard an ascent of The Old Man of Hoy as a climbing partnership, (with ropes up each pitch), a massive achievement. La Belle Destivelle- three months pregnant and a virtual solo outing with a sizable back pack. This is ten years on from the Mali Video and seems to be a year after she fell over 60 feet on a mountain in Antarctica, fracturing her leg. Age here is around 37 years old. She cut back on soloing after this to become a wife and mum. Worth watching full screen.

My comedy novel about a Glasgow outdoor club featuring chapters on Hillwalking, Kayaking, Caving,Rock Climbing, Island bagging, back packing across Europe and many other adventures is available now on kindle. The first couple of chapters can be read for free here. I also have a photo heavy guide book out. A Guide to Walking and Cycling around the River Clyde and the Firth of Clyde which has over 80 walks and cycles in it from Glasgow to Girvan and all points in between.
http://www.amazon.co.uk/gp/product/B00JNAIGAO/ref=s9_simh_bw_p351_d0_i1?pf_rd_m=A3P5ROKL5A1OLE&pf_rd_s=center-1&pf_rd_r=1JJCYXJSZ223VH4A4R09&pf_rd_t=101&pf_rd_p=511296287&pf_rd_i=341689031

If you just type it Isis and not ISIS, you can like it :-)

Don't blame you putting the bike away - I always cringe when I see folks cycling on shot ice! I put mine away as soon as they start to grit the roads anyway as it's a 1955 bike and so an antique (like it's owner, I know) ;-)
Carol.

Cheers Carol,
Some of them could be much better and I may change them for ones that don't mottle when I post them on the blog. Might be a combination of the mist effect plus I darkened a couple as they were very light with everything in the landscape being white and opaque.
It's IS now anyway :o)

Hi Sue,
I hope you are still getting out and about and enjoying yourself. Happy New Year and Best Wishes.

PS. Me Here. Finally got the photographs in this post looking the way I wanted them to appear. Naughty Blog distorting the original set I posted!

OMG! One word for these photos: stunning!

Cheers SuperLux,
Finally got the photos looking the way I wanted. Tricky light conditions can leave you disappointed sometimes if the captured shots fail to match the reality of the day. Sometimes the camera doesn't reflect the magic of what conditions were like on the ground.

Excellent set of photos Bob. Mugdock is one of my favourite areas for a half day walk with Ben, there are so many combinations of route. Days are starting to get longer already; the higher hills will be beckoning soon. Cheers, Neil

Hi Neil,
Yes, The first green shoots of snowdrops are coming up in my garden already. My mood has always dipped when the leaves on the trees disappear and my personality seems to get much darker and bleaker,as if in tandem, thought wise. It's always been like that as long as I can remember but seeing the progress of the bulbs through Jan, Feb and March brings the life and colour back into nature.

Late comer here Bob. An absolutely brilliant set of pictures. Isn't it great to get above the mist and see the difference it makes to the landscape.
Watching Catherine the Great Destivelle climb the Old Man brings back memories to me. In 1967, I was just six weeks away from getting married and me and my future wife were glued to the TV watching Bonington and party climb this amazing rock. It was one of those moments in life that remains in your psyche.

Hi Jim,
I,m still trying to get the best out of my new camera as it doesn't seem to have the clarity and sharp detail of the old one for distance photos despite being an updated model of the same type.Maybe the settings wrong?
Anyway,I do my best with the equipment available as I know freinds with more expensive cameras that take far less photos than I do as they have to faff about on the hills opening and shutting rucksacks,then camera cases, light meters,adding filters etc. Each photo can take up to five minutes and I couldn't be bothered with all that unpacking every time.I think it would actually spoil my enjoyment of photography.

Great photos, I really like the one of the sheep in the amber light.
You know, I really love the color of the streetlights over there, they are same in Scotland as they are in England. I hope you appreciate them!
That woman doing the mountain climbing, wow, that is impressive!

Hi Kay, Yes, she's an incredible climber.
You might not like or agree with the next post but it's something I feel passionately about as we seem to always devote more time, thought and energy to other issues rather than the most important one.Saving the ball we all have to live on :o)