A trip undertaken in the autumn with my mate Alan when it was still warm and sunny and T shirts were worn for the last time before the chill of winter set in. 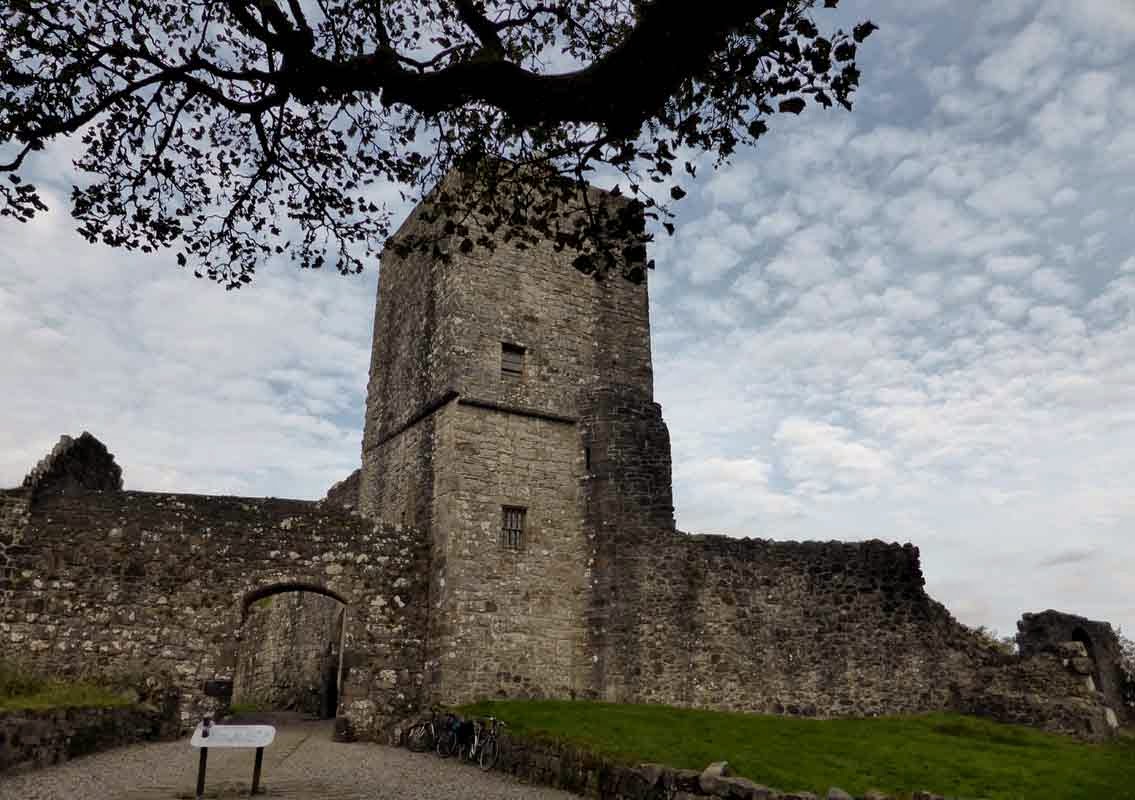 ALL PHOTOS CLICK FULL SCREEN
This enjoyable bike run of a few hours duration covers a variety of landscapes on cycle trails and rough tracks suitable for mountain bikes or hybrids and only has one real hill climb from 50 metres at Lennoxtown  to 218 metres at Blairskaith Muir summit trig. It starts at the car park in Mugdock Country Park. This is the restored castle which they have been working on for years. 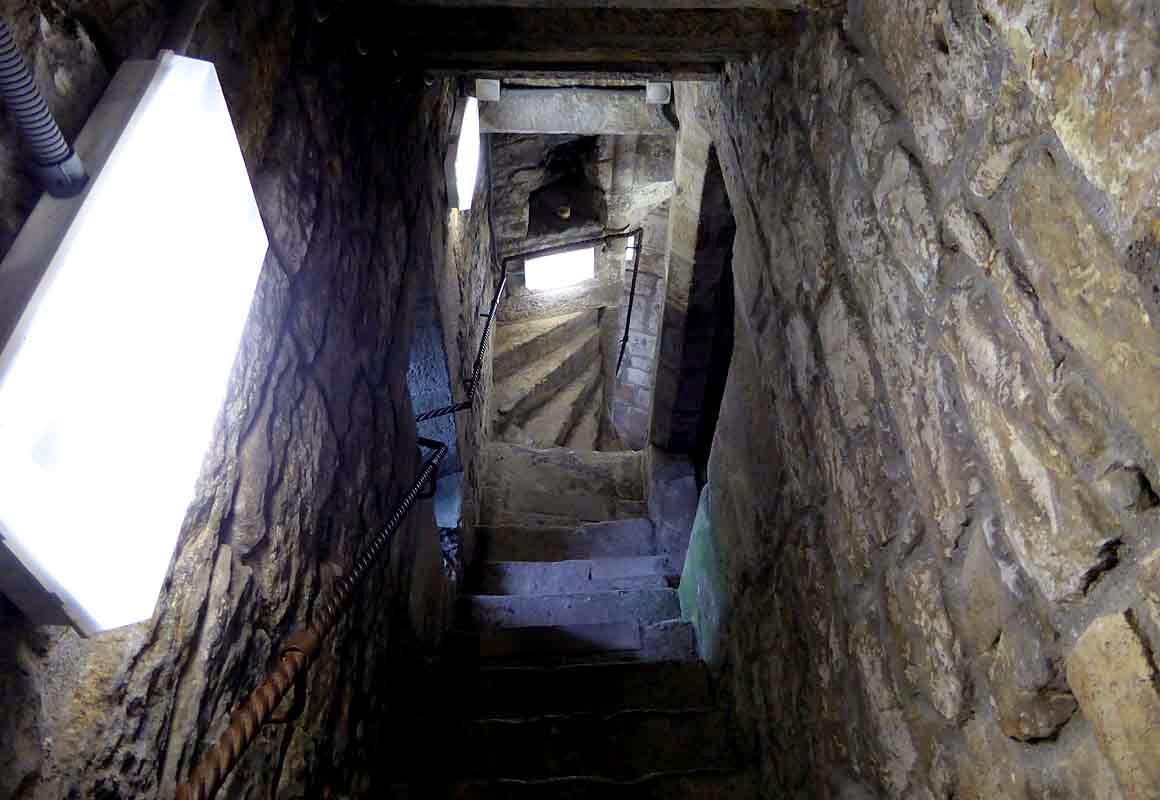 I've been here loads of times before as it,s nearby but this was the first time I've seen it open to the public in summer. A small entry fee. 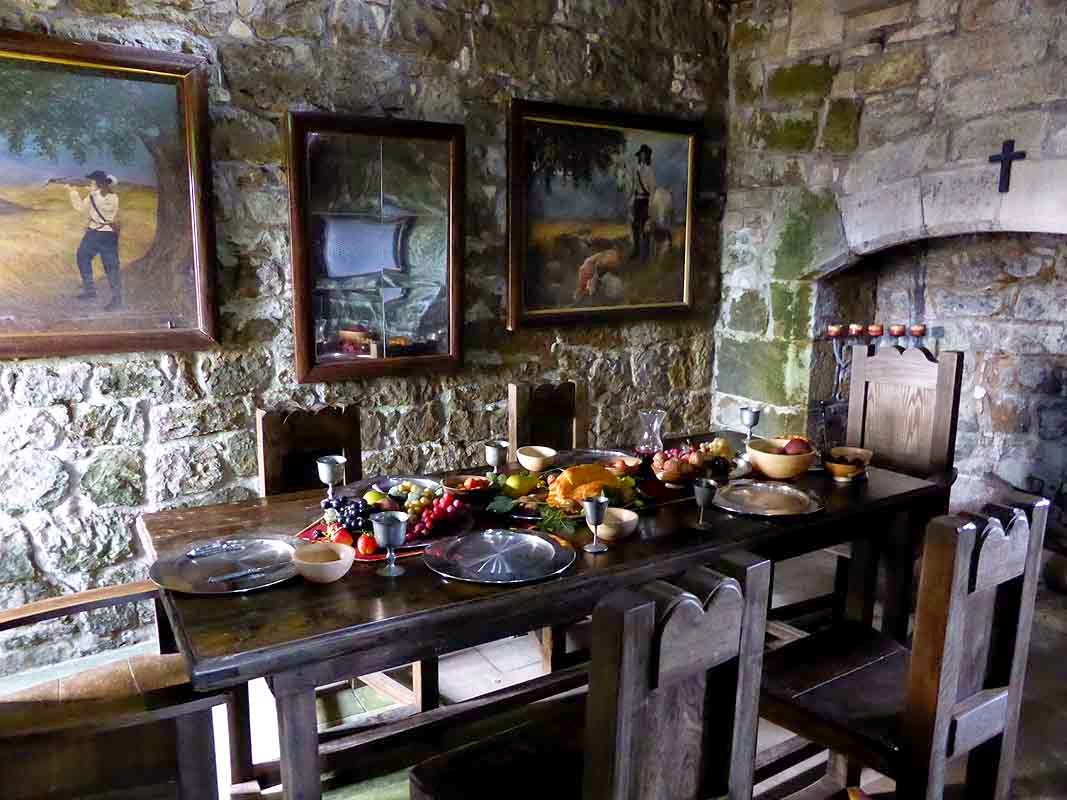 The rooms that you climb up the stairwell to visit have been decorated to give folk an impression of what it may have looked like. As it,s only a minor castle it,s pretty basic but the entry fee is very modest as well. 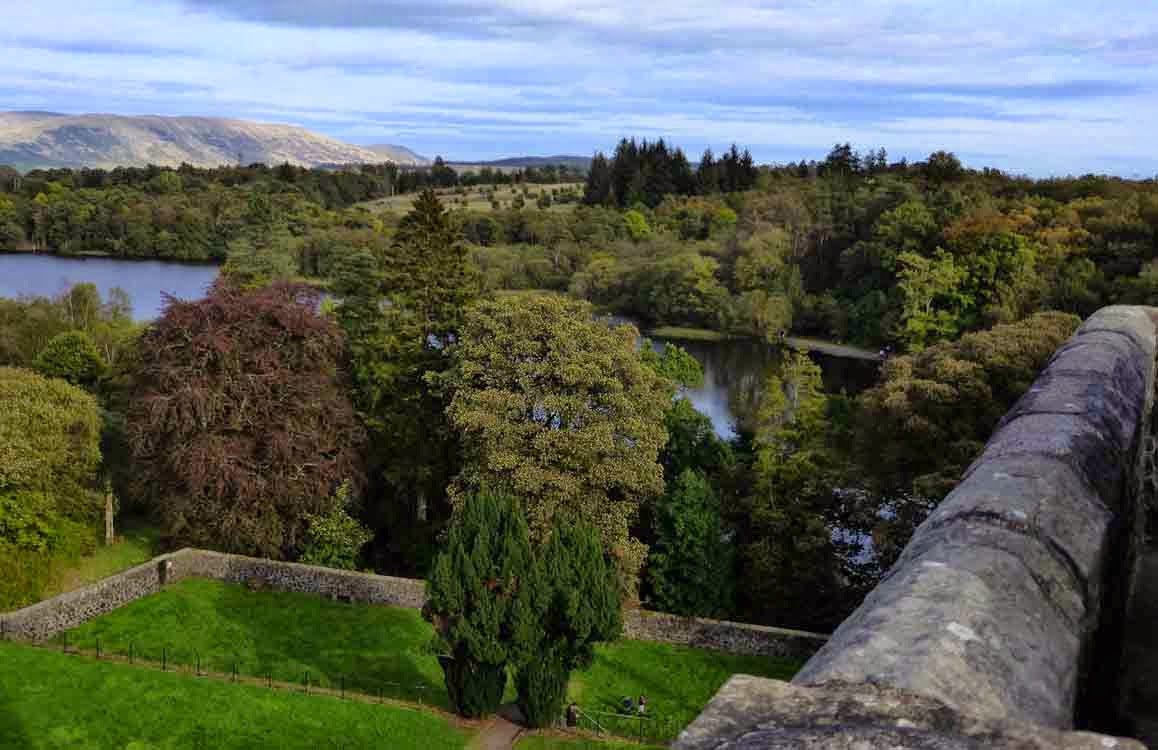 From the roof top there is a good view of Mugdock Country Park, looking in the direction of the landscape we would be cycling through under the slopes of the nearby Campsies. 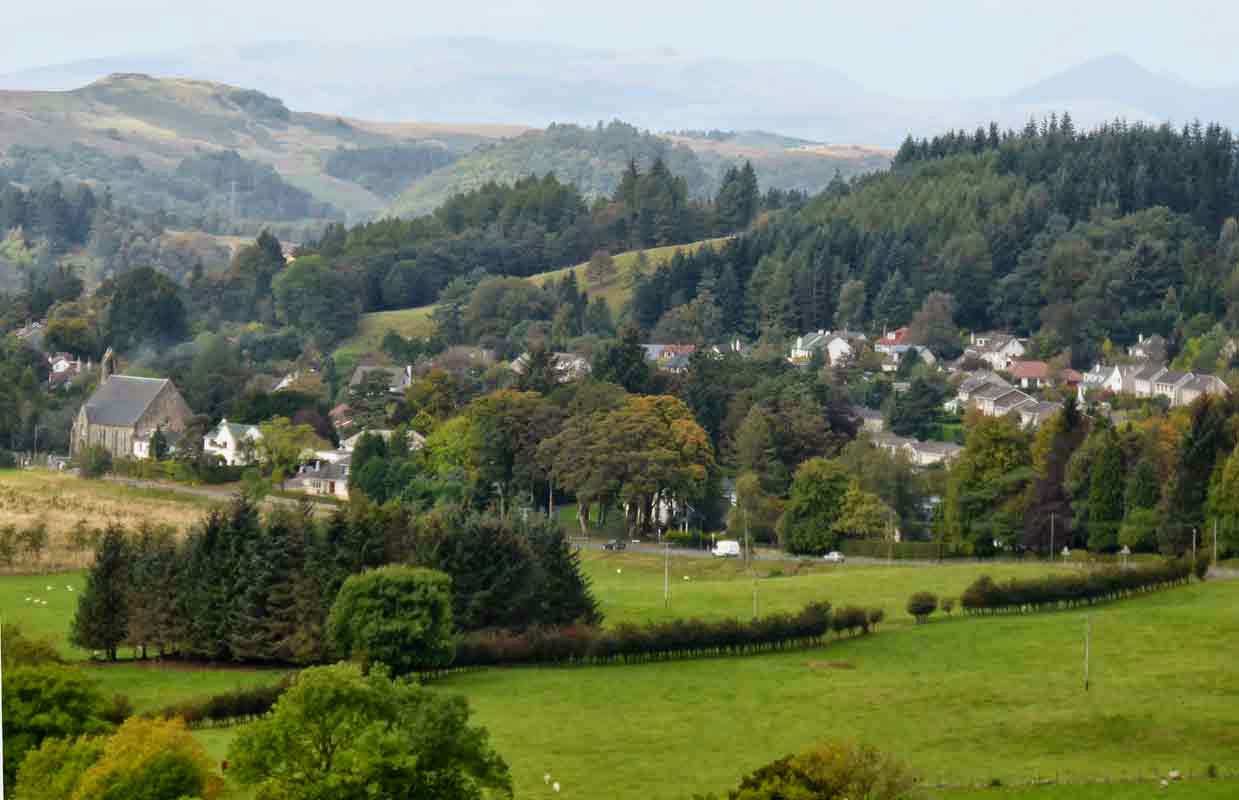 The route goes from the park onto the minor road past Deil's Craig Dam into Strathblane then takes the flat cycle track past the volcanic plug of Dunglass, 153 metres where there is a fine example of the same kind of columnar hexagonal basalt that can be seen in Fingal's Cave on Staffa; Samsons Ribs on Arthur's Seat; and the Giants Causeway in Northen Ireland. Worth a look as is the view from the grassy summit, seen here, of the village of Strathblane. 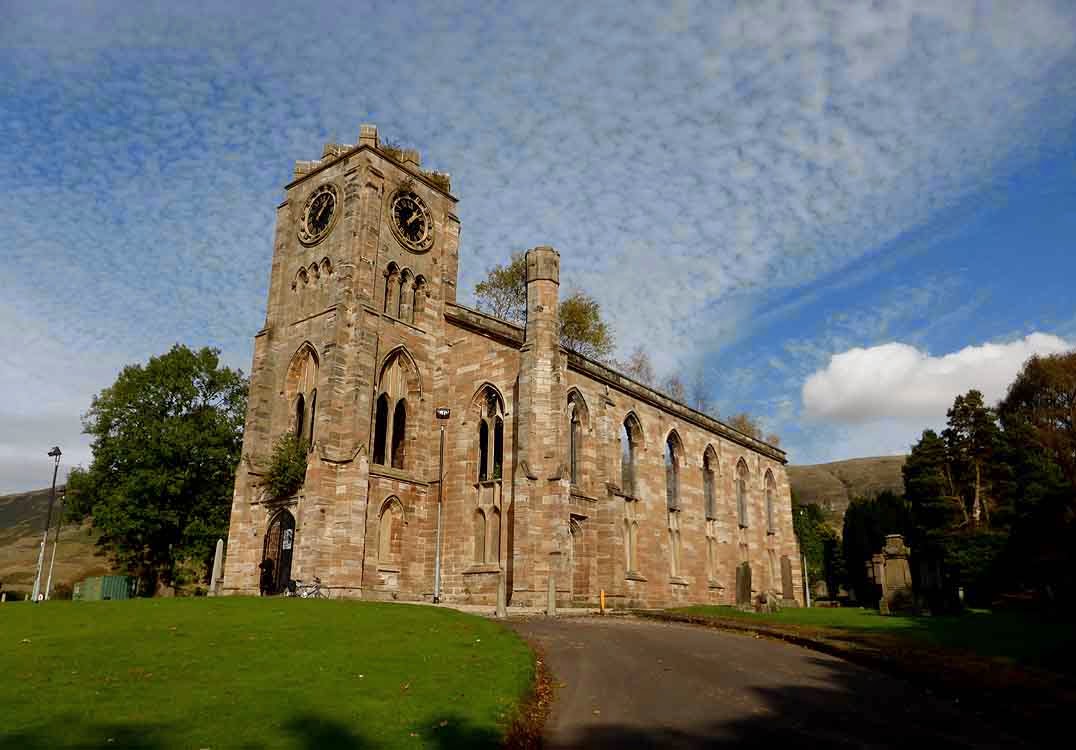 After the flat traffic free run along the cycle track with great views of the Campsies we entered Lennoxtown and had lunch in the old church yard. This is a magnificent building but unfortunately it was destroyed by fire several decades ago and is just a shell now. The wall of the Campsies from the old Church yard. Lennoxtown has an interesting history, found here. http://en.wikipedia.org/wiki/Lennoxtown 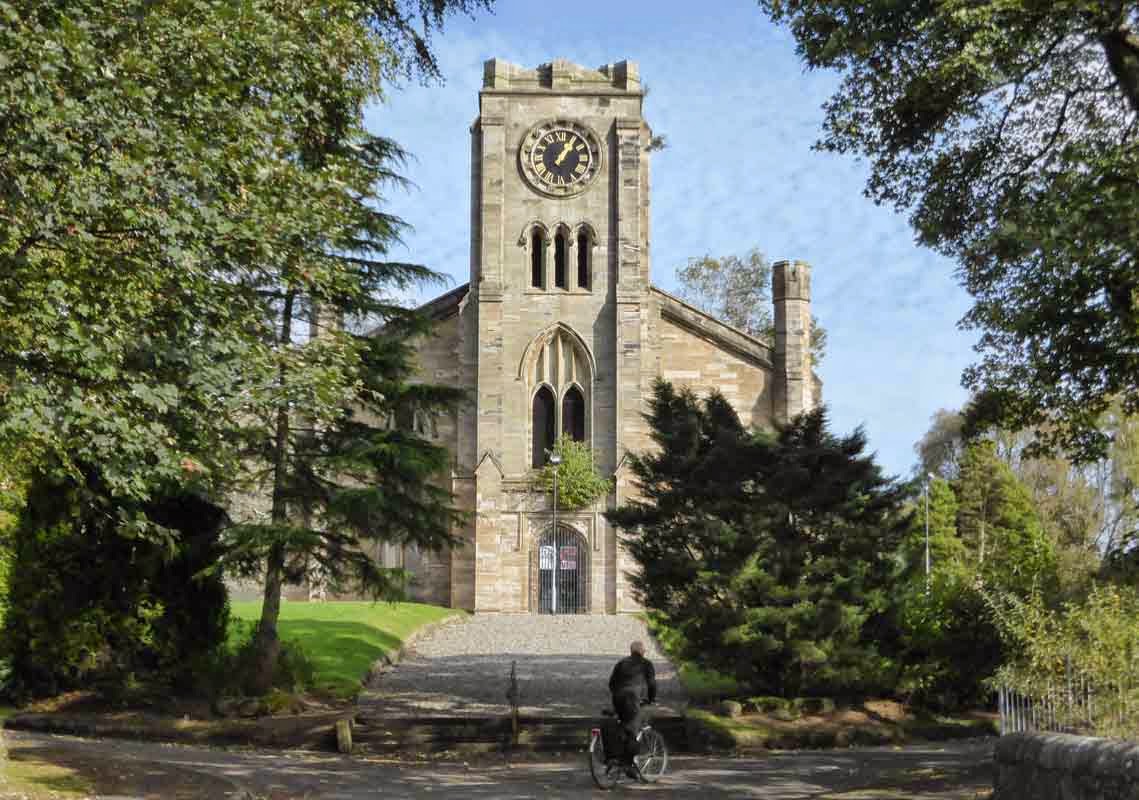 The loss of the church must have been deeply felt by the community as it stands within its own grounds
From here we headed uphill to the only major climb of the day which was the minor road that leads up to.Newlands and then Blairskaith Muir. This minor road passes Celtic Park Training ground and the place where Lulu was born. ( Lennox Castle) We did see a few Celtic players in their luxury cars heading for training but I couldn't tell you who they were these days, even if they removed their designer sunglasses. 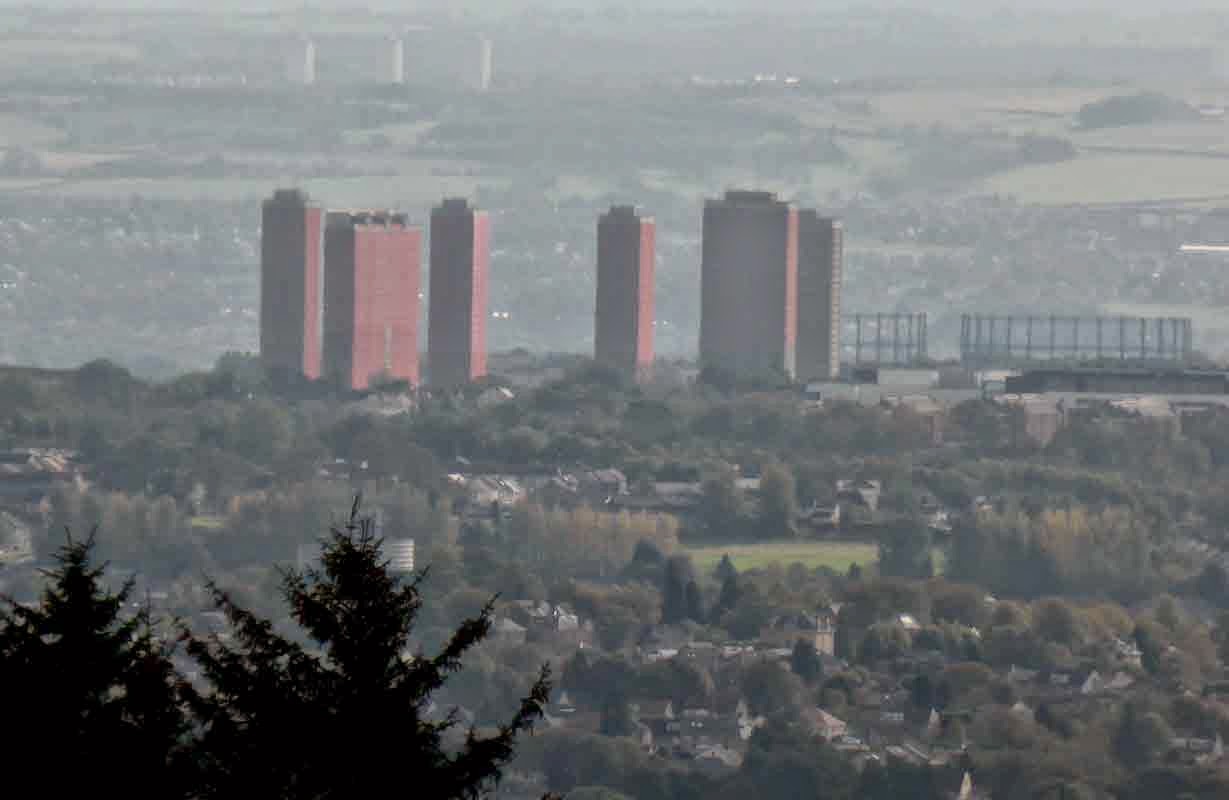 Extensive but hazy views started to appear at the highpoint beside the trig at 218 metres. This is a zoom of the Red Road flats. 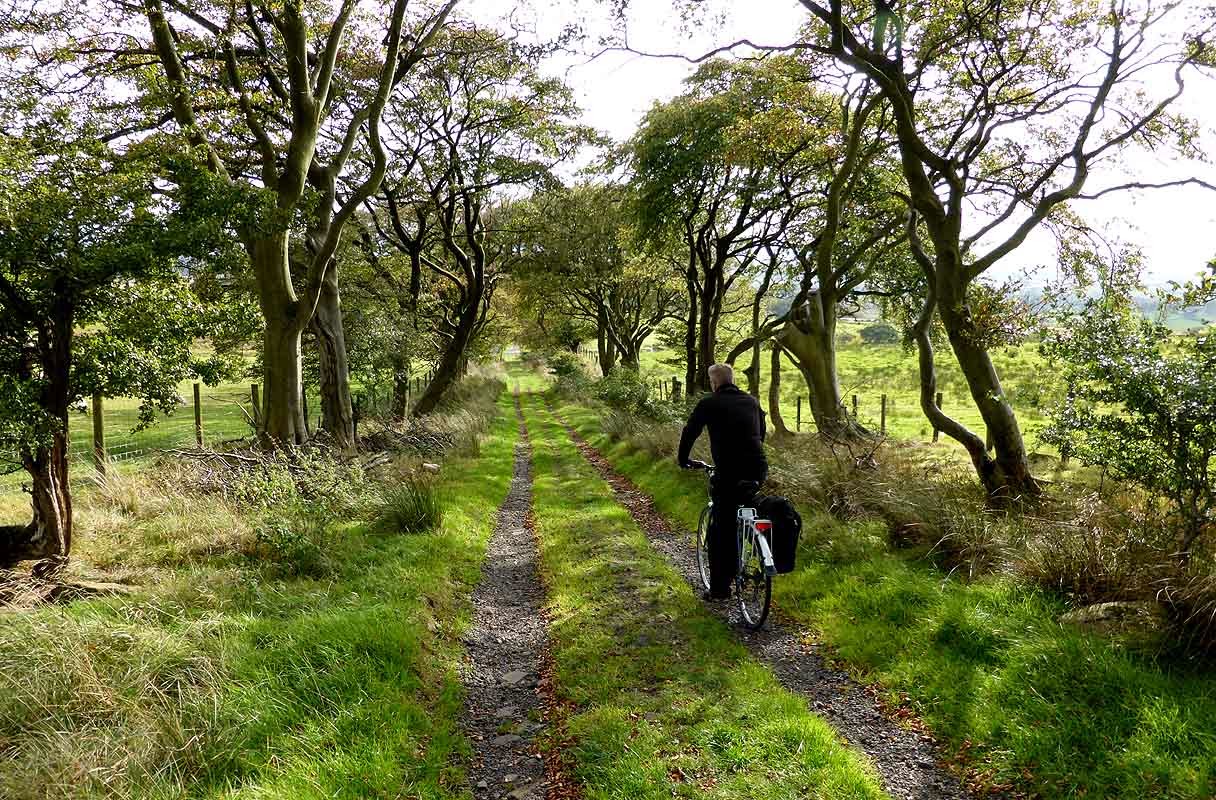 Although it doesn't appear on the OS map of Glasgow there is a linking track from the trig down to Blairskaith Quarry and this is where we headed. 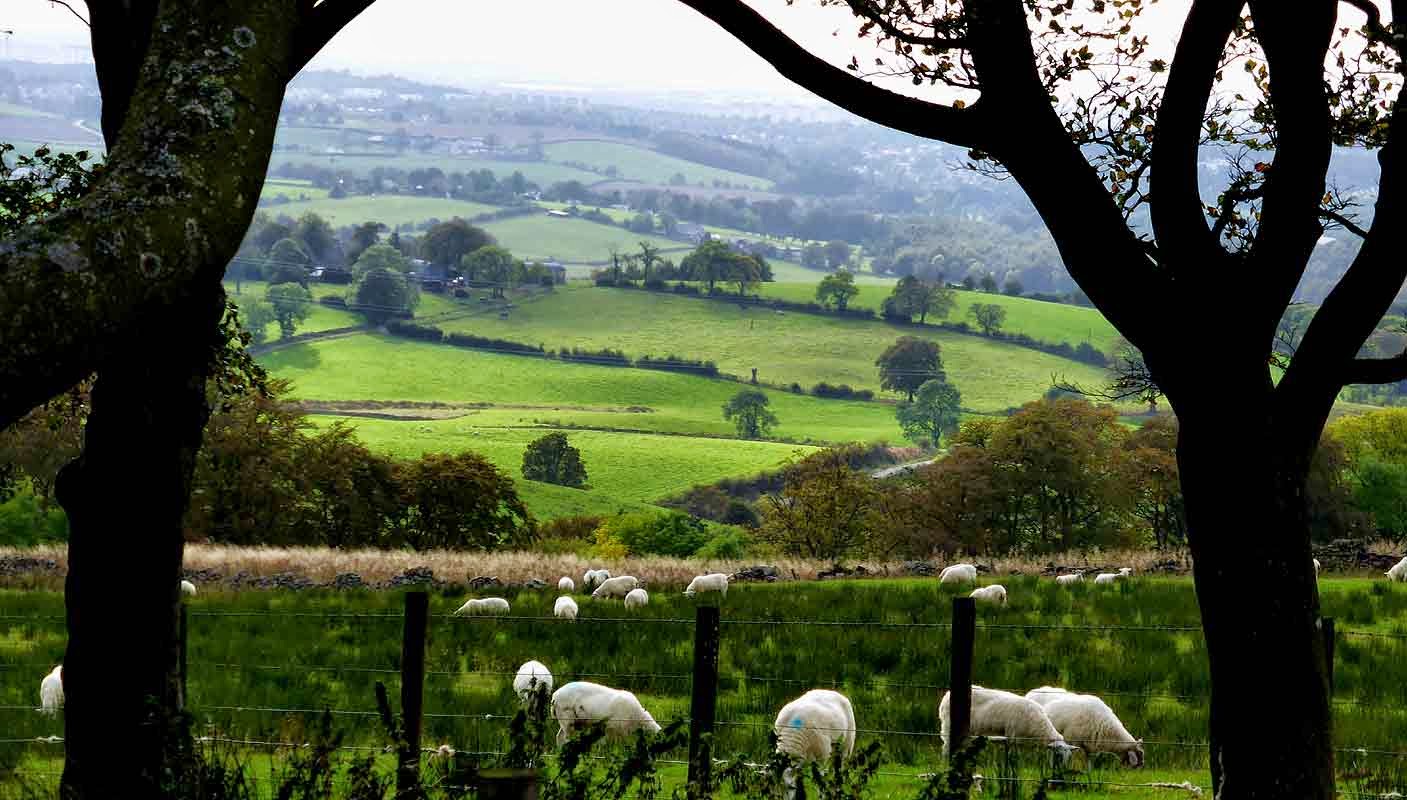 Panoramic views here too, looking down on the fertile farmlands of East Dumbartonshire. 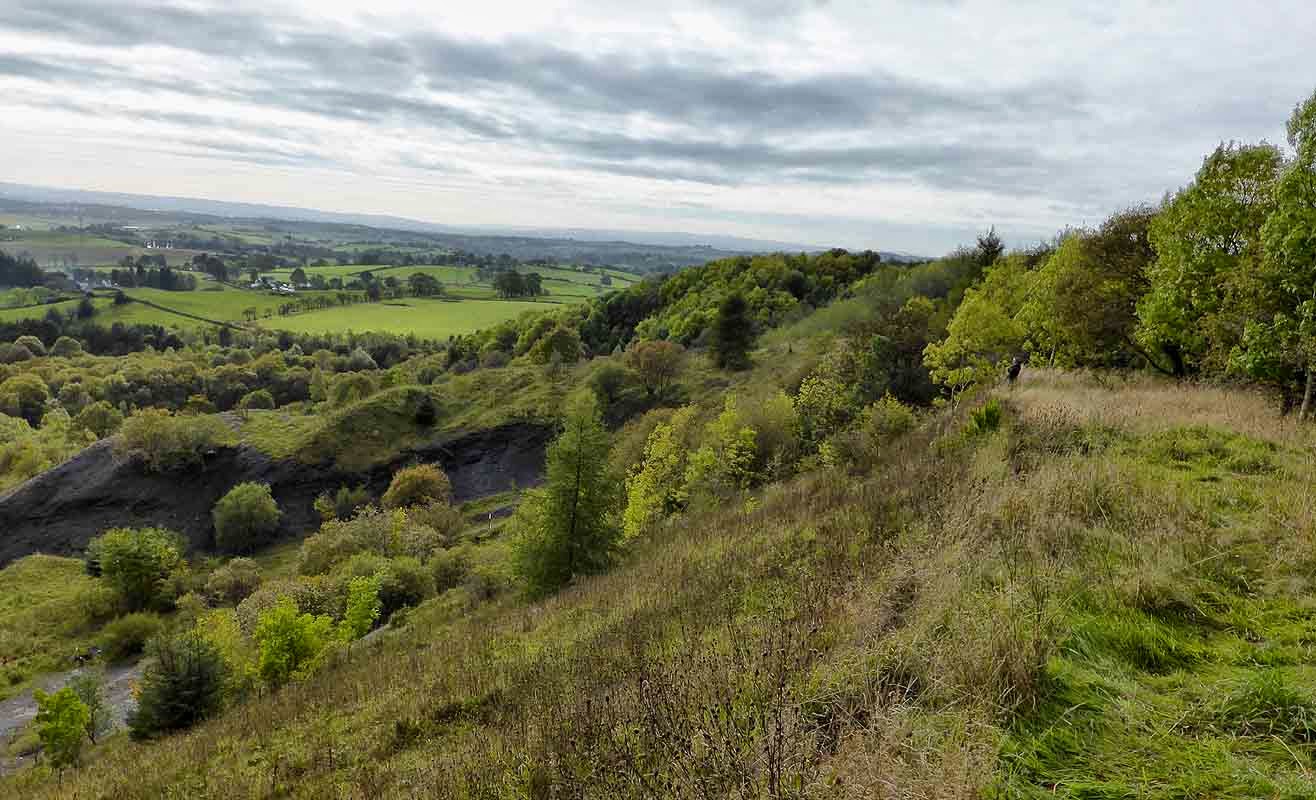 Watching kestrels from the edge of the disused Blairkaith Quarry. Alan seemed impressed with this viewpoint that very few walkers know about.
We returned along the minor road network past North Blochairn and Mugdock Village. Around 3 to 4 hours round trip at a steady pace. A grand tour. Enjoyable and not too strenuous as you can easily push the bike up the only major hill climb. 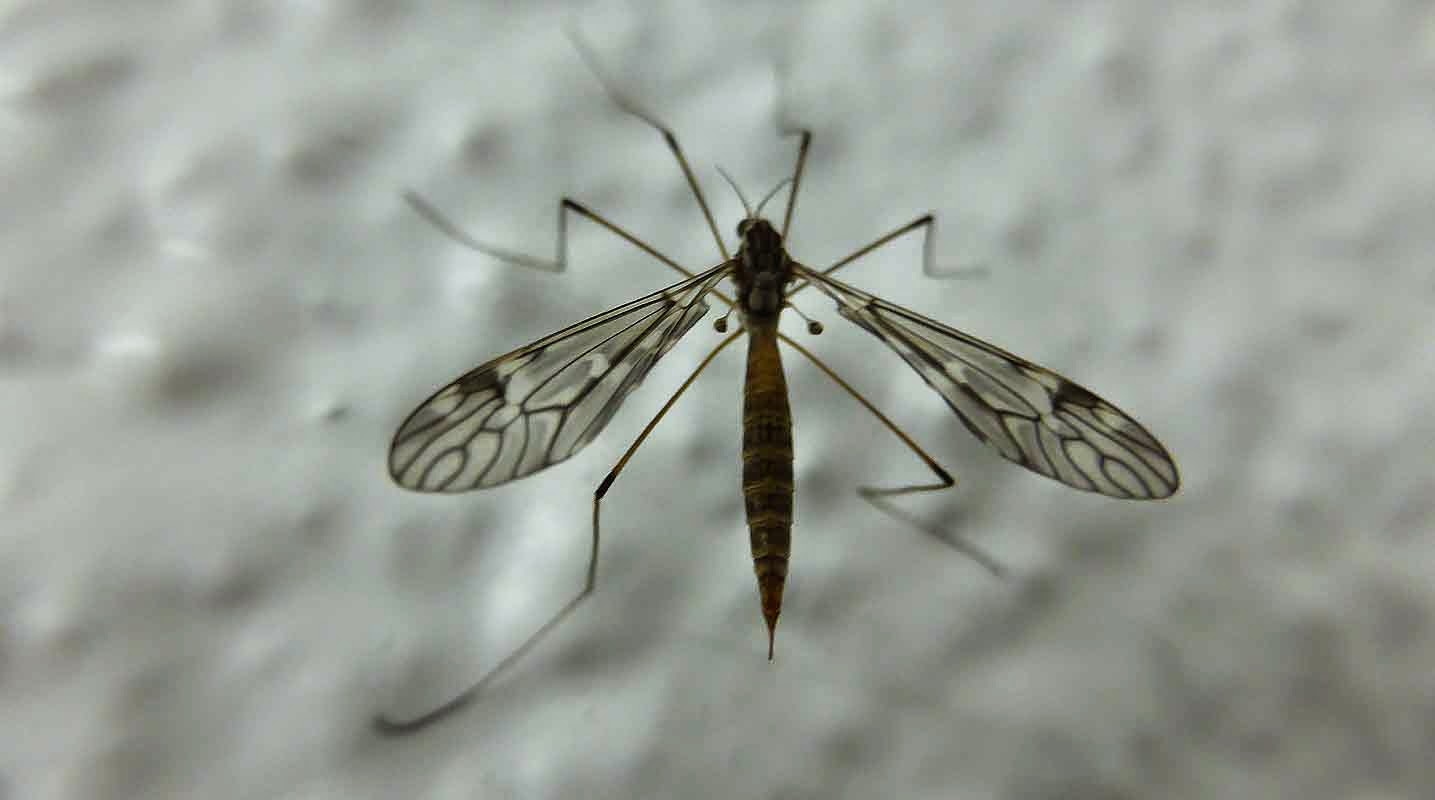 A crane fly on a wall in Mugdock village. Nice wing patterns that caught my eye.

David Byrne, main songwriter and front man of Talking Heads was born in Dumbarton before moving to Canada, aged two, then America. He is also well known around New York for being a keen cyclist over many decades. A perfect fit for a cycling post.

That looks superb - you really do have some great countryside around Glasgow. I've never been to the Campsies yet...

LOL to the footballers comment - I wonder how many of them are Scots nowadays?
Carol.

Hi Carol,
Some cracking areas around Glasgow.I never get tired of them and I,m still finding new places after 40 plus years of exploring this area.
I used to know most of the Rangers and Celtic Teams by sight but since football moved to Sky and is no longer on ordinary TV much I only recognize a few better known individuals as I,m not enough of a football fan to pay to watch it. With news on the internet I only get a Saturday paper now as well for the weeks TV. Although useful in many ways The internet has killed or is killing a lot of things we used to take for granted. The music industry,record sales, book and paper publishing,high street shopping and retail parks...old style supermarkets?

We keep meaning to visit Mugdock castle but haven't quite got there. Maybe next year - not long to go now! All the best for 2015 when it comes...

Cheers Anne,
Mugdock Country Park is lovely but it was absolutely heaving over the current holiday period. The castle tower is only open during the summer months at present.Children would enjoy the climb. Happy New Year and all the best for 2015.

Some great pictures again Bob. They do need to be looked at full screen to really appreciate them.
Thanks for the Talking Heads clip, great. I love the way David Byrne evolves and reinvents himself. Wild wild life was one of my favourites back in the day.
Happy New Year

Richard only gets a newspaper on a Saturday and also just for the telly pages.

You're right about the many drawbacks of t'internet (although I wouldn't be without it) but I had to laugh at all those who ordered their entire Christmas online this year well into December and then the delivery firms didn't have time to deliver it before the big day! LOL

One great thing about the internet though is the medical advice available out there. I had a strange rash and was busily ignoring it but decided to google it anyway. I soon found out I'd landed myself with a case of shingles. Without the googling I wouldn't have gone to the doctor's until well down the line when it would have been much harder to treat. I'm hoping the anti-virals are in time. That's my New Year buggered though :-(
Carol.

Hi Jim,
I try my best.Like you I get as much of a kick if I take a good photo these days as I do climbing the actual hill. If it's a really dull hill with no decent photo opportunities I feel cheated a little as a long running weekly blog takes a lot of feeding, as you know... photo wise.
Every Talking Head album was always in a different style. I liked Remain in Light and Little Creatures.
Happy New Year.

Hi Carol,
I had chicken pox years ago and had to take time off work. It was worth getting it just for that alone :o)
Happy New Year and thanks for the ad highlighting my book. Much appreciated.
Do you make much money from your small ads over a year. It's something I've considered myself. I,m number 9,789,300 in the USA's list of blogs and worth £700 dollars. That's got to count for something :o)

Hey!
I tried to leave a comment earlier this week but I wasn't able to!
I wanted to tell you how much I love the photos here, the one with the sheep is my favorite.
By telling me that Lennoxtown is where Lulu is from reminds me of "To Sir With Love". I love that movie.
Happy New Year!

What a sight! Your place is a beauty. I have always wanted to go there since I saw this Made of Honor movie. The place is just idyllic.

Have a wonderful 2015! Looking forward to more magnificent photos from you. :)

Hi Kay,
I think Lulu was born there because it was a large maternity hospital then an asylum, which might explain a lot.I know she grew up in Dennistoun, a city district in the east end of Glasgow before finding fame with Shout(which I think she heard Alex Harvey singing who had probably heard it in Germany(an early hit for the Isley Brothers in 1959)
Happy New Year and all the best for 2015.

Hello SuperLux,
Scotland has great scenery to offer when it's not raining. Thank you for dropping in. Happy New Year and Best Wishes for 2015.

Hi Bob, not sure what ad you mean? Did your book appear in an ad at the foot of one of my posts? If so, that's Wordpress who do those - I don't have anything to do with them nor do I get money for them.

I wonder what number my blog is and how much it's worth. Which website did you look at to see that info?
Carol.

Hi Carol,
Yes, the paperback version popped up in an ad on your blog and I can often see a small square divided into four on your blog with small ads for cycling, general hillwalking
etc... Maybe it's just ads tailored for me though as I've recently joined Facebook(against my better judgement)to try and promote my books.(They appeared before that though.) I put mostly false info on it when it asked for personal stuff yet because I ticked certain boxes for sports or music I like I now get promotional info for these so I know it can only be generated by them.
Being older,uploading all my personal details and life online just seems a bad idea. I've not got anything to hide but being pre-computer I don't trust the buggers with that info stuck on there forever.
That blog ranking info just came up one day. I didn't search for it but you have to have an American following per week for it to rank I suspect. It's probably ex- Scots abroad dropping in because of the BlueSkyScotland tag as I get folk from Canada, the USA and elsewhere wanting to see photos from back home. My sister still talks about Scotland as "coming home" even though she's been in OZ since the late 1960s/early 70s.Where you grow up always has a strong hold on the mind.