I had a free day off midweek so decided to head down in the car to the nearest Clyde Coastal resort to me, which happens to be Saltcoats, as a perfect storm was expected to roll in from America all the way across the wild Atlantic then hit the west coast of Ireland and Scotland over two days. In a term borrowed from American forecasters they were calling it a "Weather bomb" in the UK Media. Weather forecasting seems to be changing and has now got "Sexy" "Dynamic" and "Entertaining" presumably so folk will pay more attention to it. They are still haunted to some extent by the Michael Fish unfortunate comment from 1987 where he predicted " There is no hurricane coming across the Atlantic." only to be proved wrong when a larger storm than expected caused considerable disruption to the South of England and brought down a massive amount of trees which blocked roads over a wide chunk of the UK.
Now they seem to always err on the side of overstatement with approaching storms, just it case it is a whopper and we are all caught unprepared with our pants down.Weather forecasting is not an easy job these days. 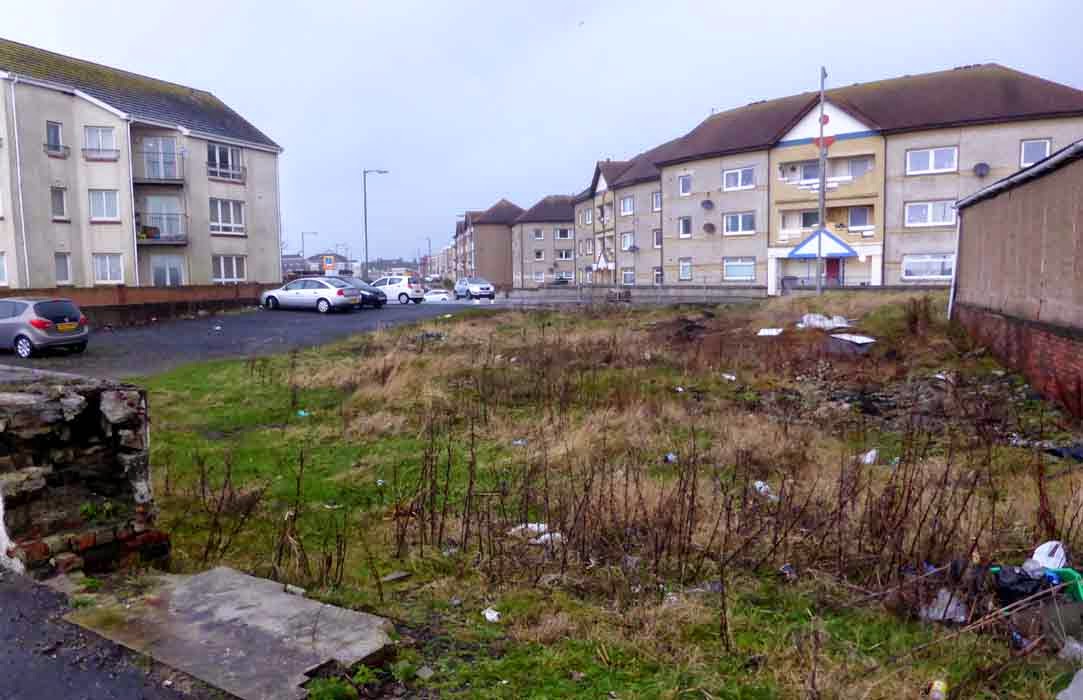 ALL PHOTOS CLICK FULL SCREEN
Saltcoats was once a popular working class coastal resort but like a lot of British seaside holiday towns has suffered badly from cheap flights to sunnier climes and no longer gets large numbers of visitors most of the year and as a consequence can look fairy run down, especially on a bleak winter's day. I've always liked the place though as it has bags of character, and more importantly for me, is a good base for several walks and cycle rides which start from its large seafront car park.These are all described in my new book available on Kindle bookstore here for £1.99 which has over 80 enjoyable walks and cycle rides described in it from Lanark to Girvan along the river and is illustrated with 146 original colour photographs. For anyone that likes walking, cycling or just a visual journey down this famous river then around the Firth of Clyde  this may be a worthwhile addition to the Christmas stocking. Blah, blah, blah. Plug over.
http://www.amazon.co.uk/Guide-Walking-Cycling-around-Clyde-ebook/dp/B00P1IO2SM/ref=sr_1_1?s=digital-text&ie=UTF8&qid=1418490296&sr=1-1&keywords=A+guide+to+walking+and+cycling+the+River+Clyde+and+Firth+of+Clyde 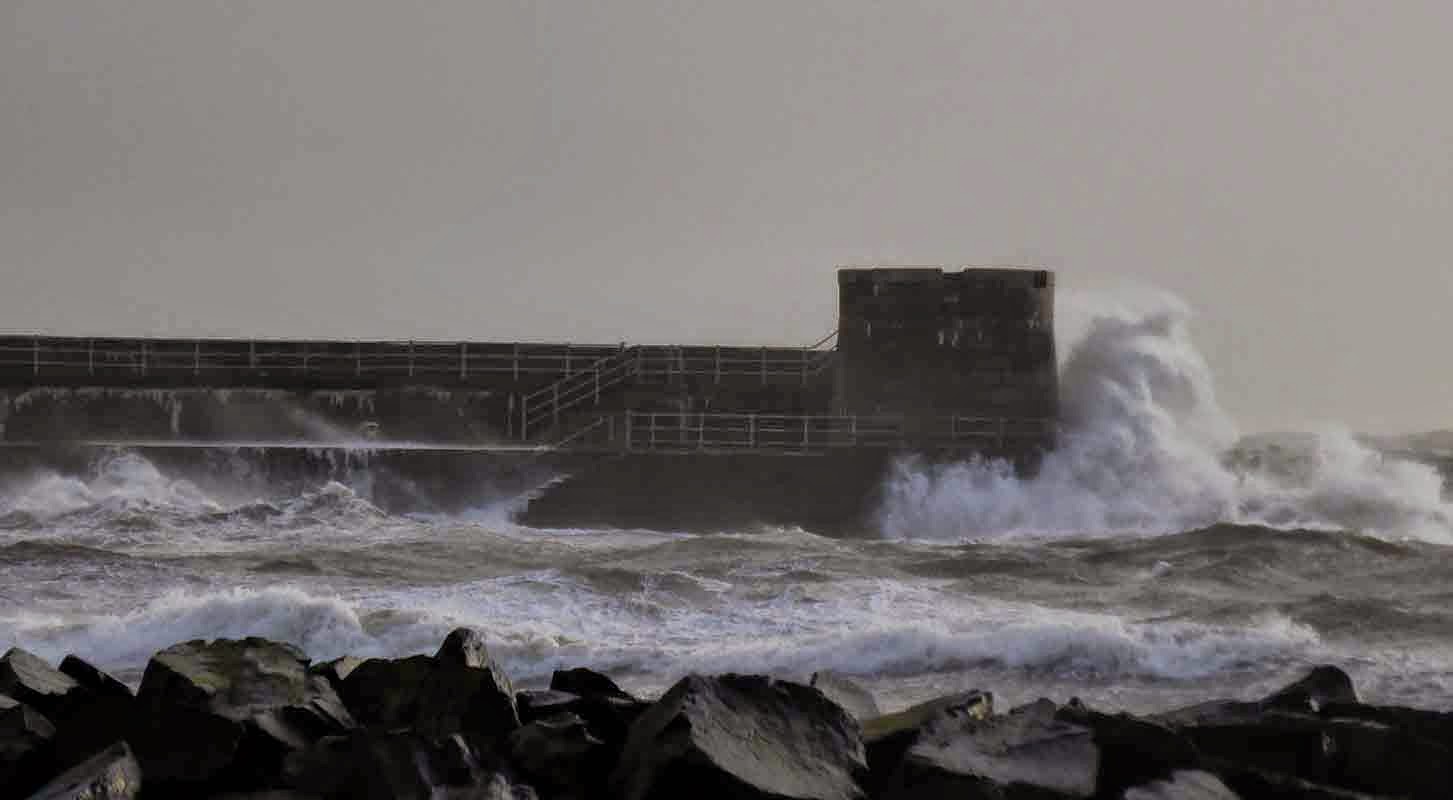 As usual I looked up the Met office tide tables before setting off to make sure I would arrive a couple of hours before maximum high tide. I was not disappointed when I arrived as huge waves were already battering into the harbour and sea defenses with the gusts predicted to be between 60 to 80 miles an hour.
During the winter season Britain usually gets high rainfall, raging seas and extensive flooding as the country juts out into the North Atlantic Ocean and four different weather systems come together and fight for dominance over the UK. Scotland is already one of the windiest countries in Europe and these winds and storms seem to be increasing year by year. 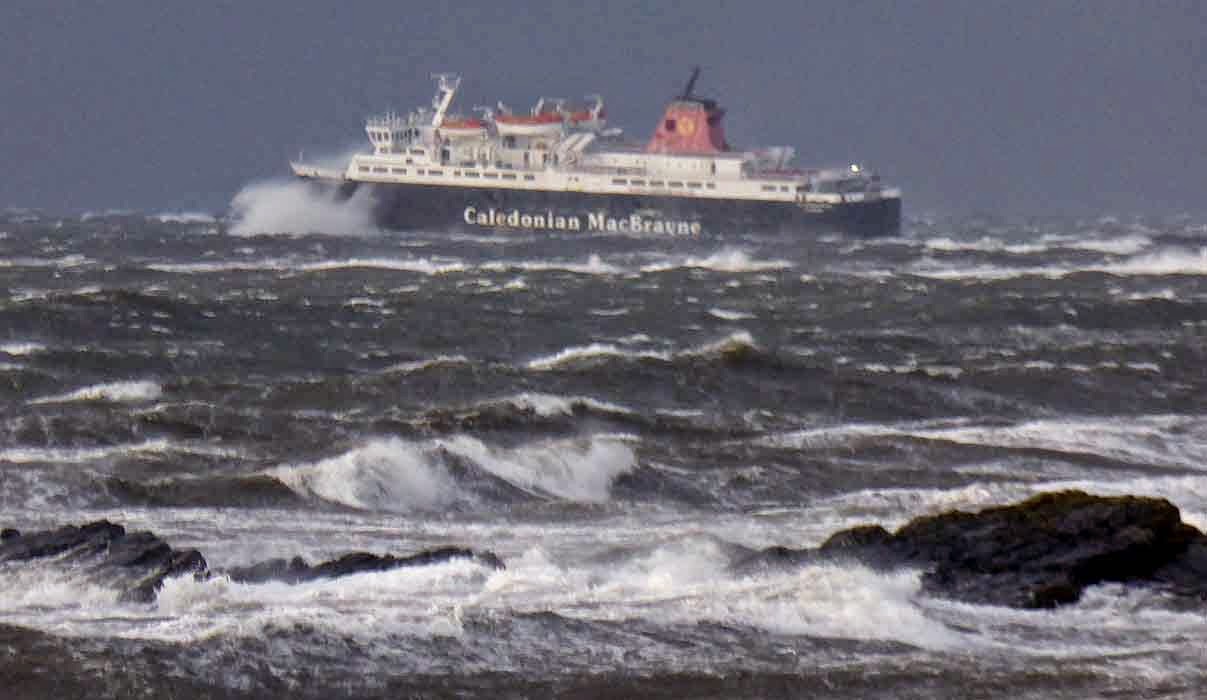 We don't have hurricanes in this country of course... just frisky weather and the Ferry was still running from Ardrossan to Arran although by the way it was bobbing up and down a few passengers were no doubt turning green on board. 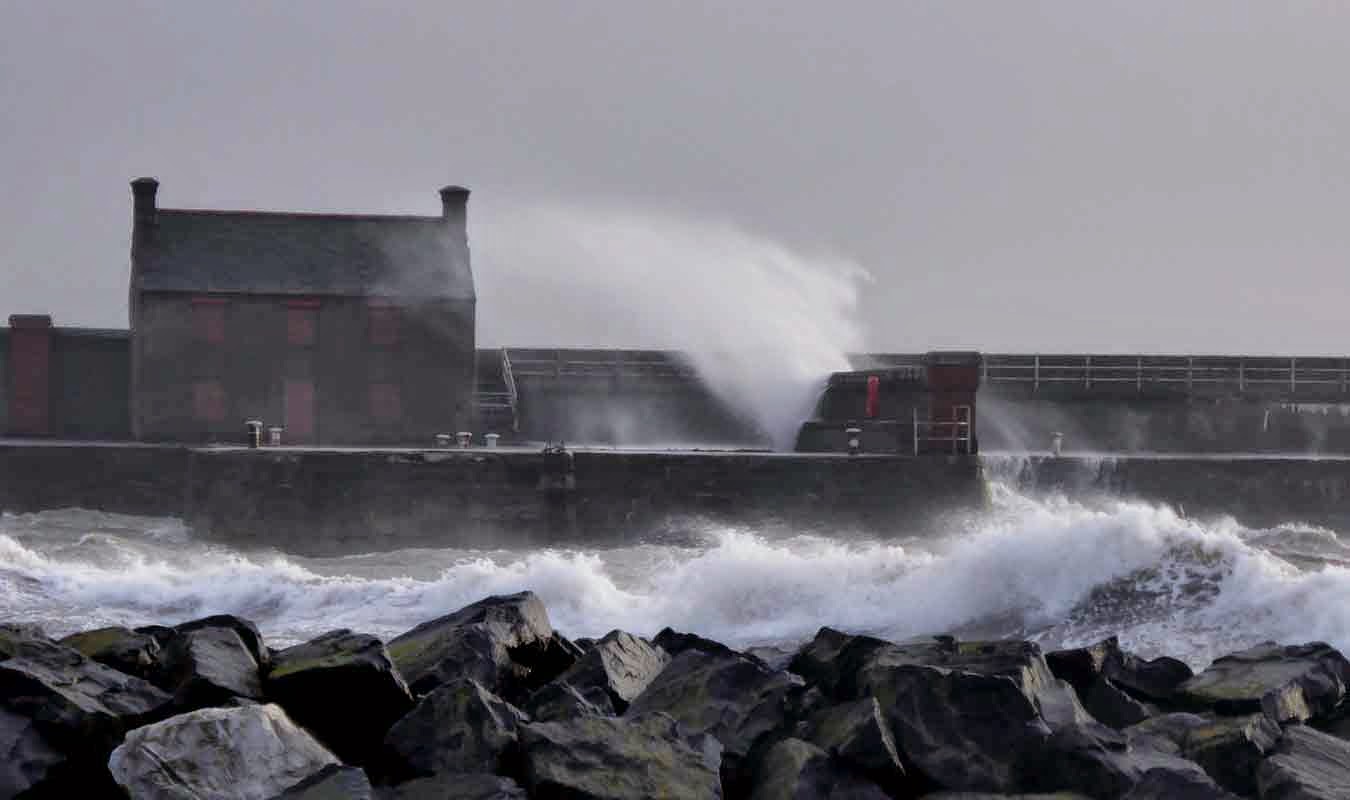 I put my boots on, locked the car, and had a stroll round the harbour, seen above. It was fairly breezy with good wave action on show. I,m not a thrill seeker as such and I,m very careful about putting myself into dangerous situations but I had a quick assessment and decided it was safe enough to walk around and up the tower seen in the second photograph. If I experienced any danger I would turn back. One of the benefits of being a mountaineer is that you do get fairly good at risk assessment of natural features once you have done it for a while. Careful observation before you do anything is usually the key to safety. 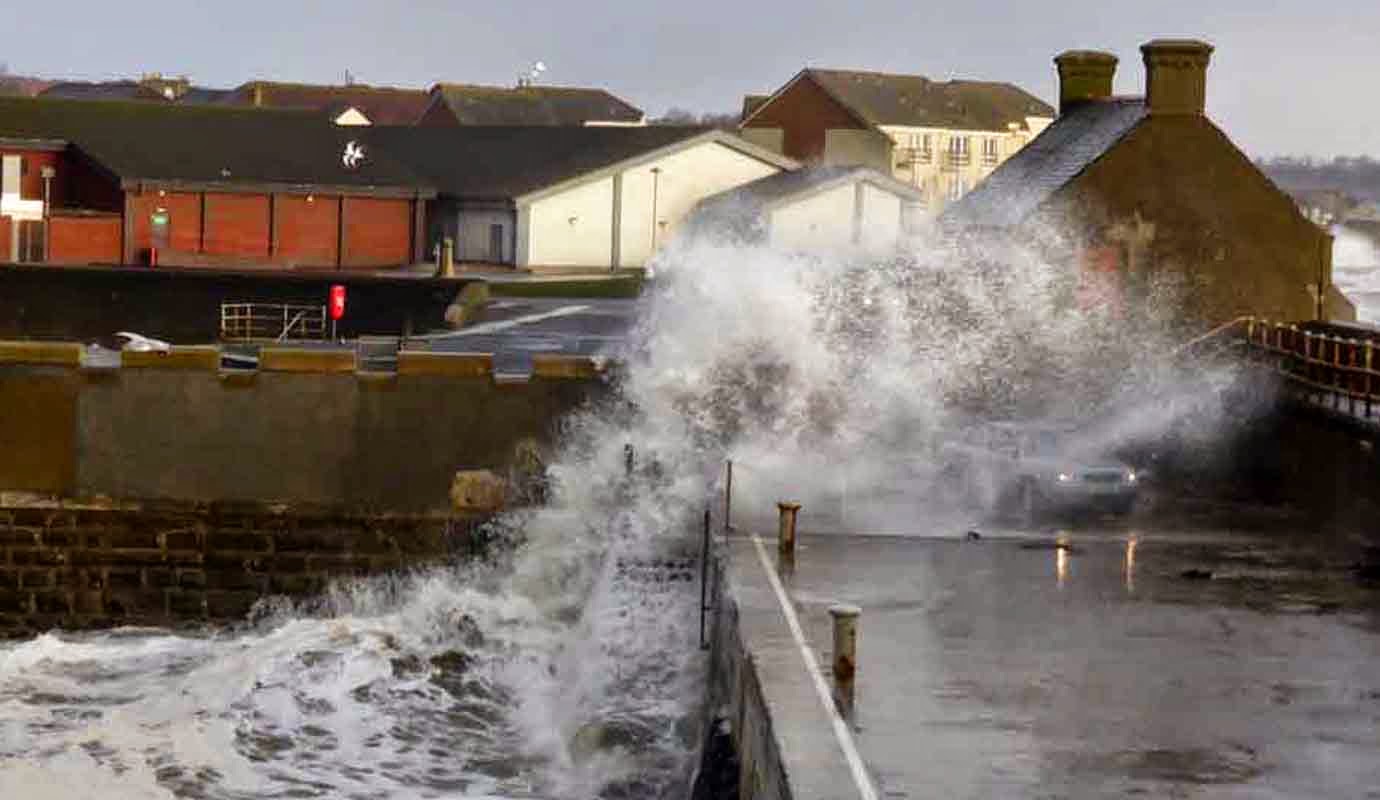 As on previous trips down the coast in wild weather I was surprised by the number of car drivers willing to drive through salt water spray in their vehicles as any inside the engine, electrics or bearings will soon turn into problems once it starts to rust.  My own car was parked well away from any spray. 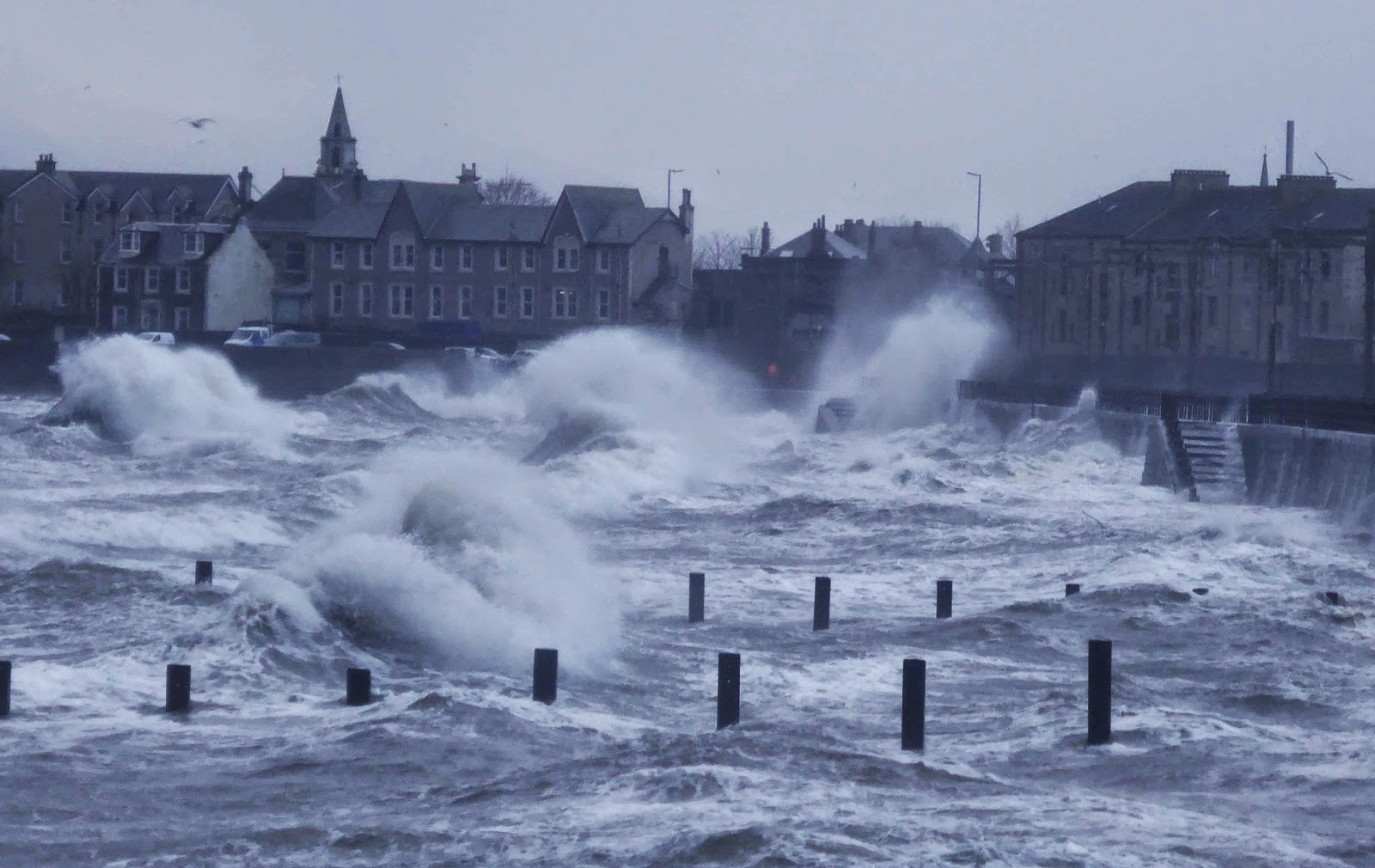 The old esplanade to the south of Saltcoats is one of the best places to see good wave action as the shoreline here is rocky and uneven, producing "jumpy" seas. (a technical weather term :o) Although it was midweek this place has been on the television news several times as you can drive a vehicle close to the seafront here and both BBC and STV usually send a weather person to this location to jump out the car briefly and report on the storm and advise people not to come. Of course this has the opposite effect and quite a few photographers were already here and most of them had much better camera equipment than mine, many with shoebox sized zooms or several different expensive cameras slung around their neck. The last time I observed so much gathered Canon and Nikon equipment together in one place was photographing puffins on the Isle of May. I found this quite comical then as some of the zooms were massive and yet the puffins were only 20 feet away most of the time. 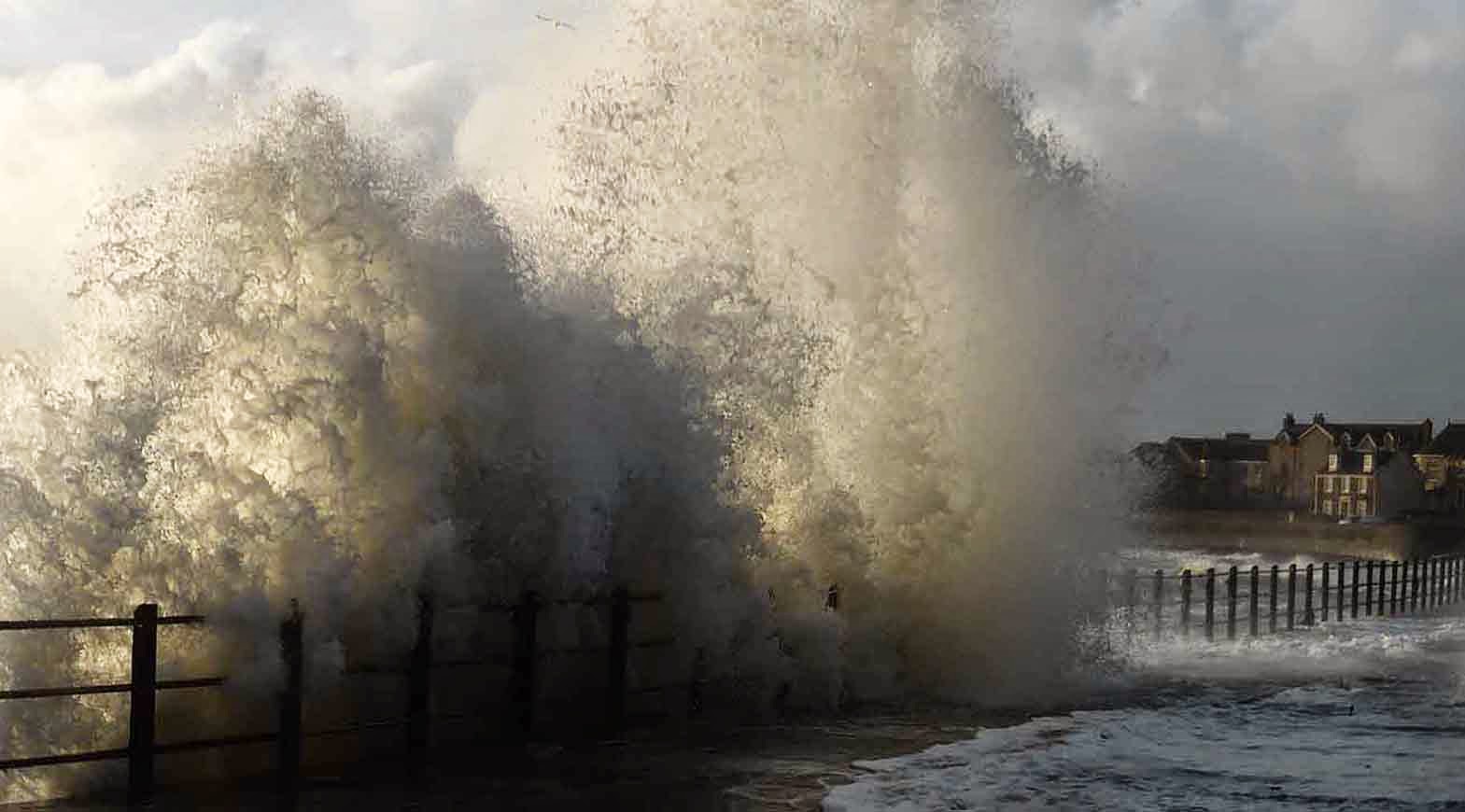 I had a few secret weapons of my own however that might give me the edge. A. I was willing to get wet. B. I had a full set of waterproofs and boots on. C. My camera was inexpensive and pocket sized and I was willing to risk it getting damp with some spray although I would try to keep it safe. D. I was not static and intended to walk part of the Ayrshire Coastal Path towards Stevenson just for the fun of getting out as I love wild conditions like these. 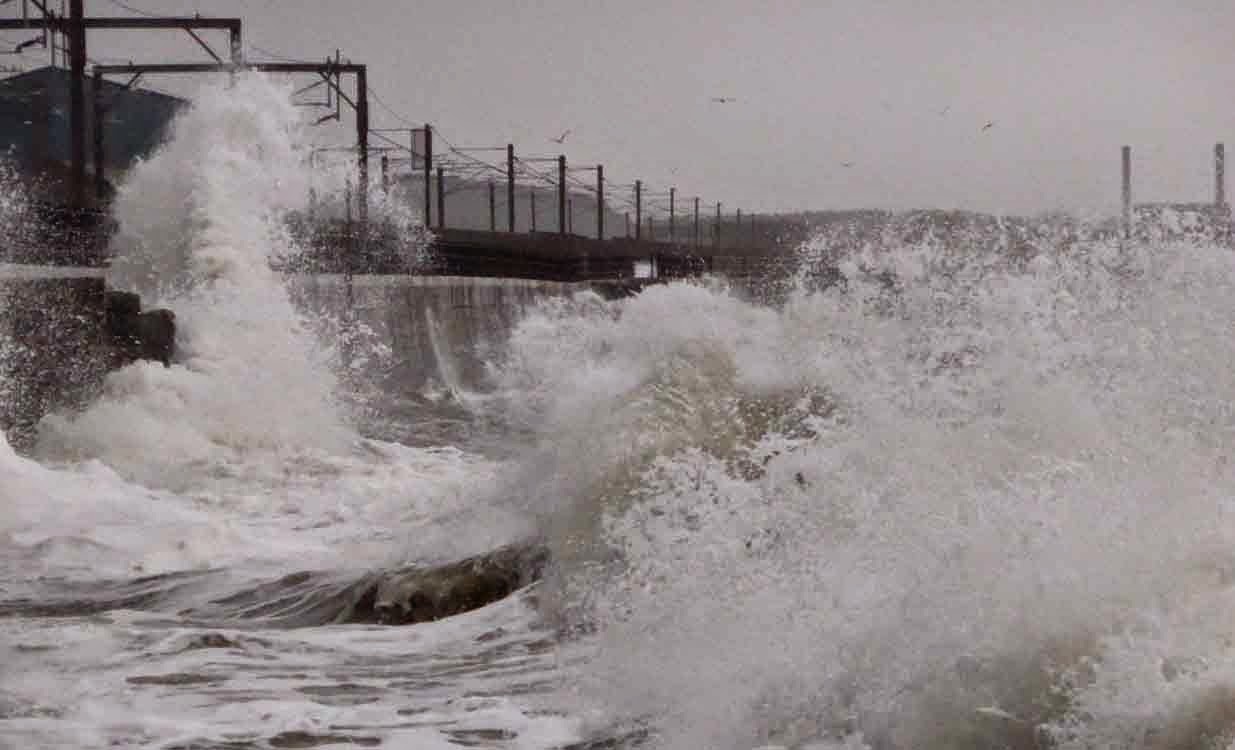 As I've sussed this place out before in previous years I already knew the electricity to the overhead railway lines in the above photograph might well be turned off during the storm and I made sure by asking a nearby line engineer examining the track for damage. A tiny portion of beach is usually exposed even with raging seas all around it so this is where I stood for this photograph. Perfectly safe as long as you are aware of the risks with an incoming tide although when I jumped off the seawall and disappeared I did notice some strange concerned looks as where the other photographers were standing (well back from the railings) they couldn't see this tiny patch of beach below. 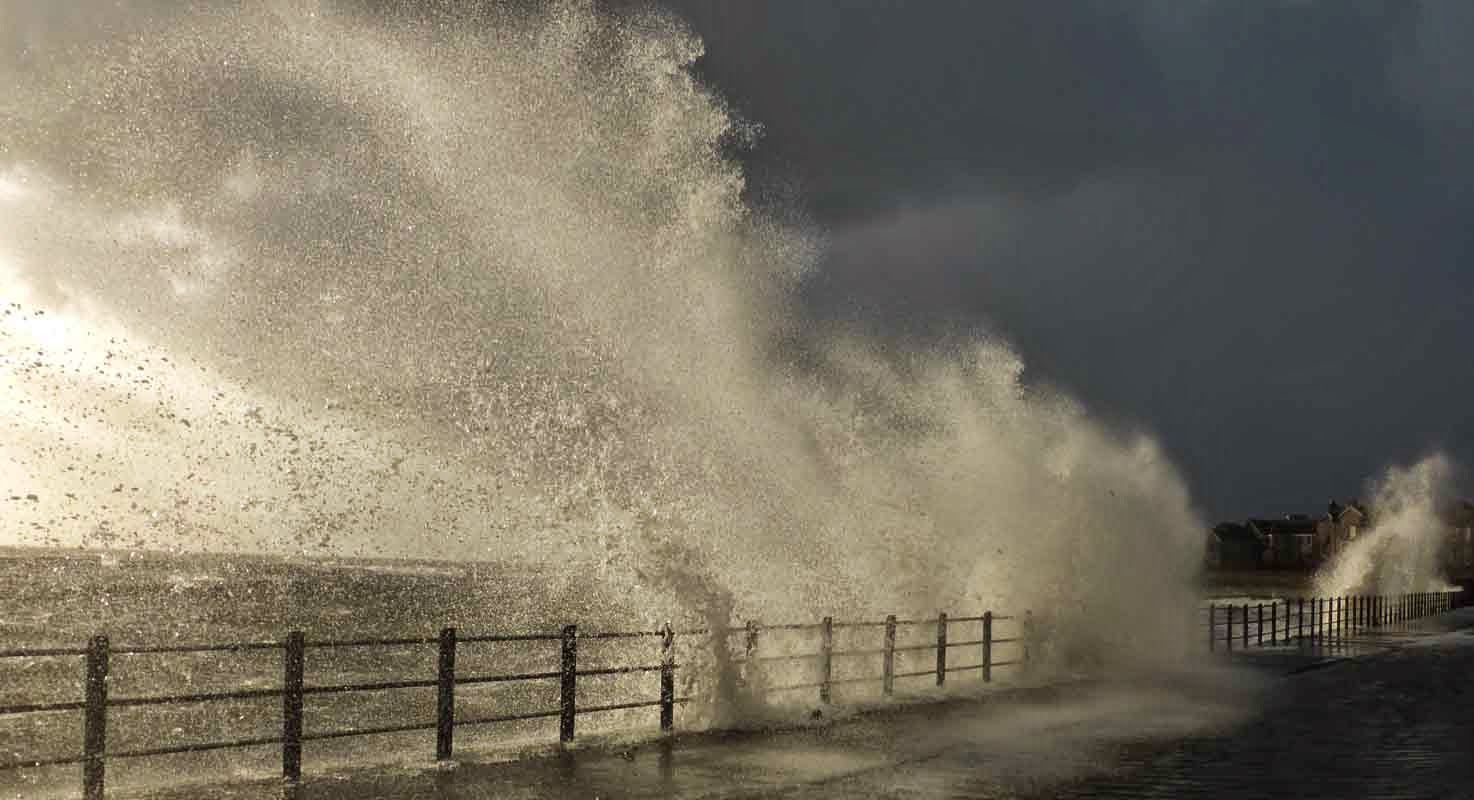 Being a boy of very little brain I like simple plans and my next move was to stand right beside the incoming waves to take photographs as I,d already observed all the waves were breaking against the sea wall with the same action, which was straight up. Obviously, if it had been a different type of "punching" wave with a pushing then sucking action I would have stayed clear, although with my body shape these days it would take King Neptune himself to pull me through the railings. (Sadly, the last time I squeezed into a wet suit I looked like an apple in a sock :o( 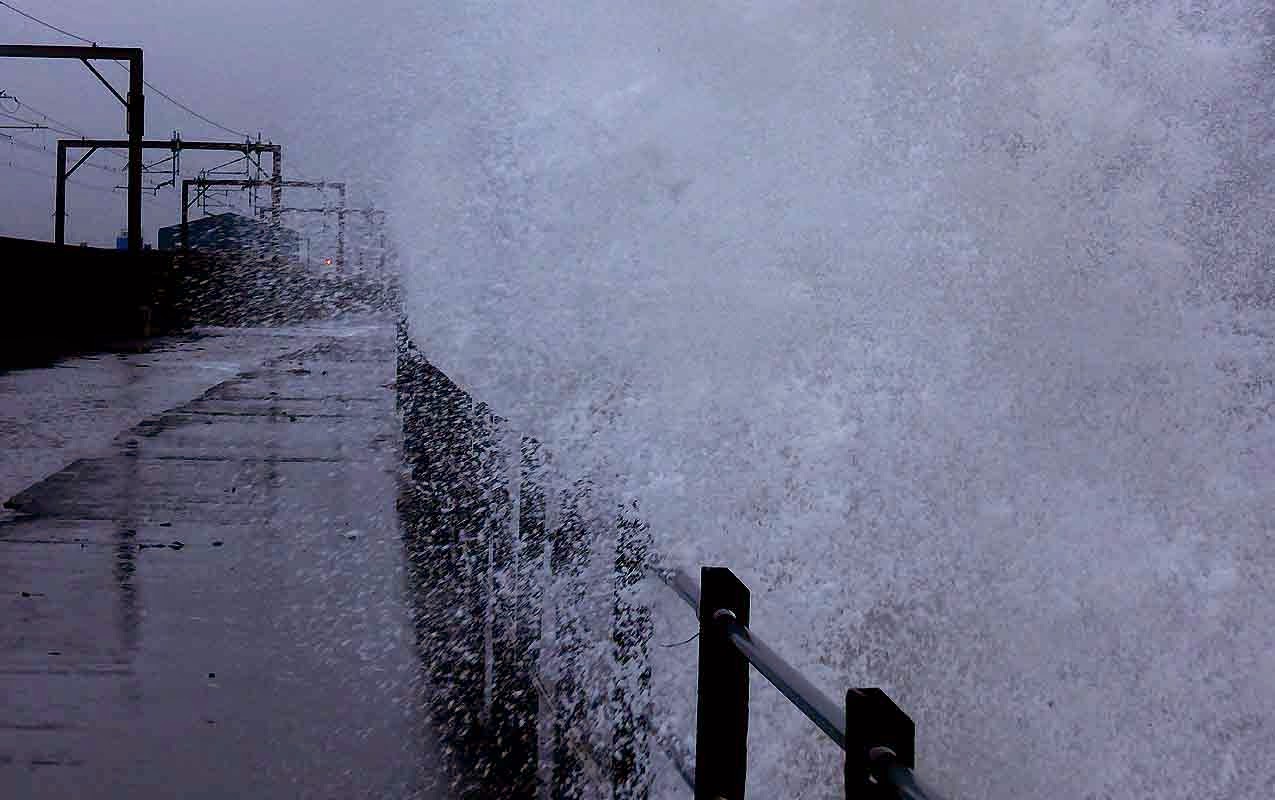 Got a wet foot with this one though. Poor Bobby. 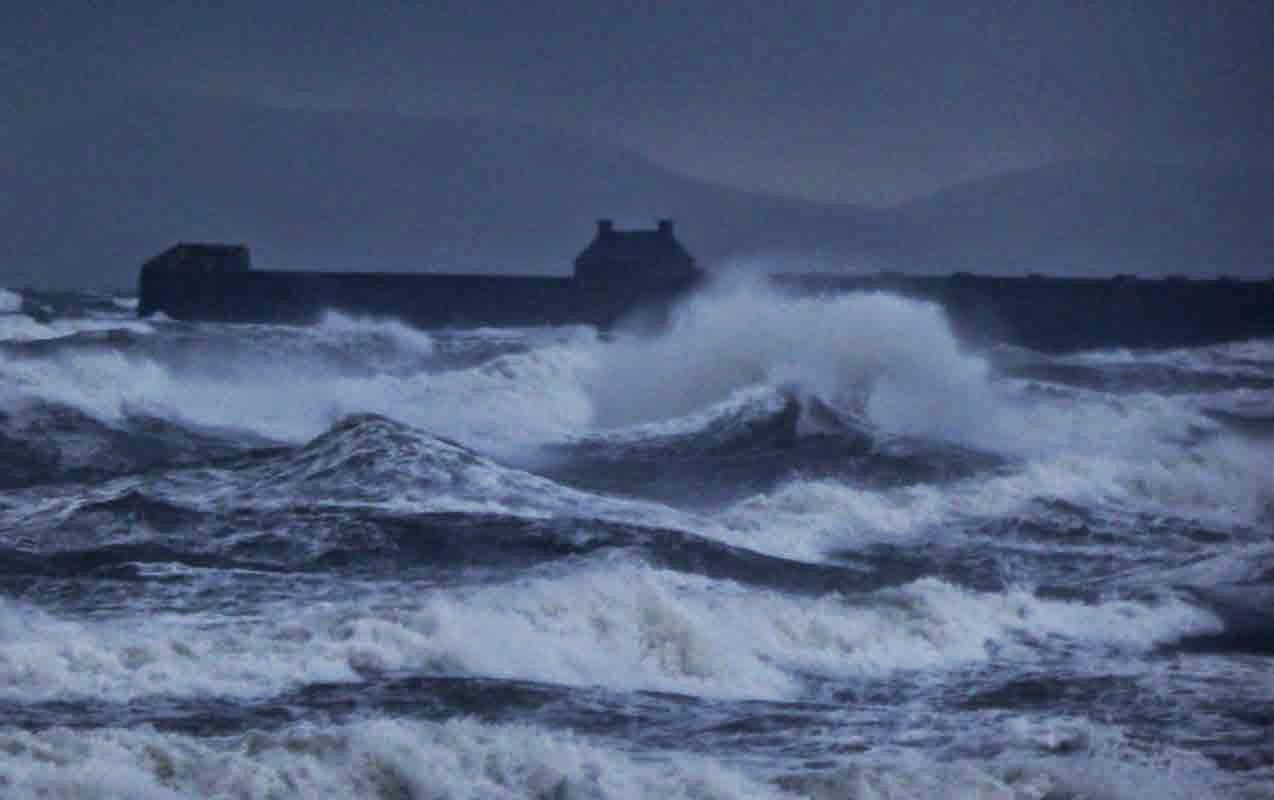 Saltcoats Harbour from the Esplanade. 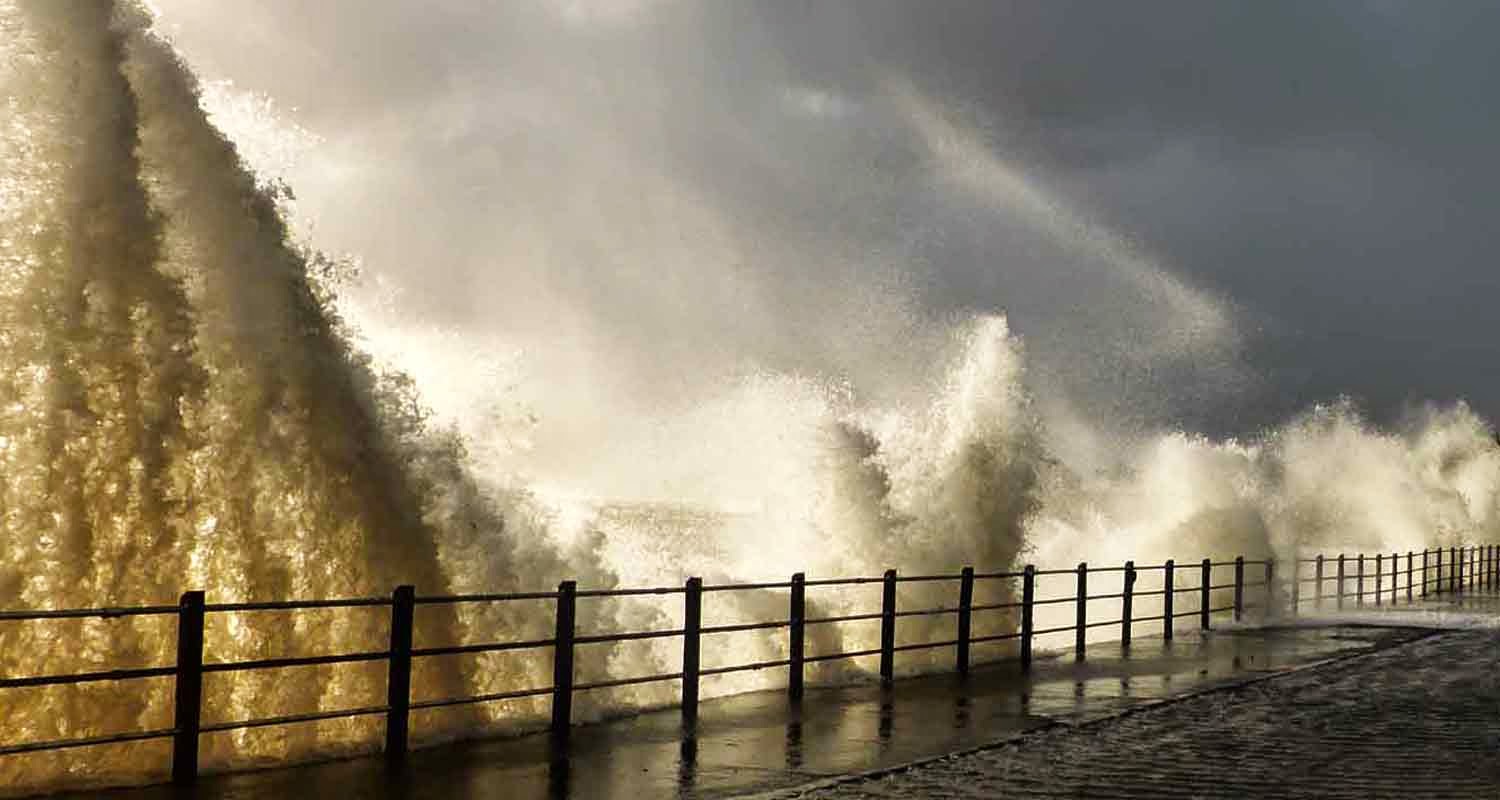 Very pleased with this photograph and my new camera was still dry. 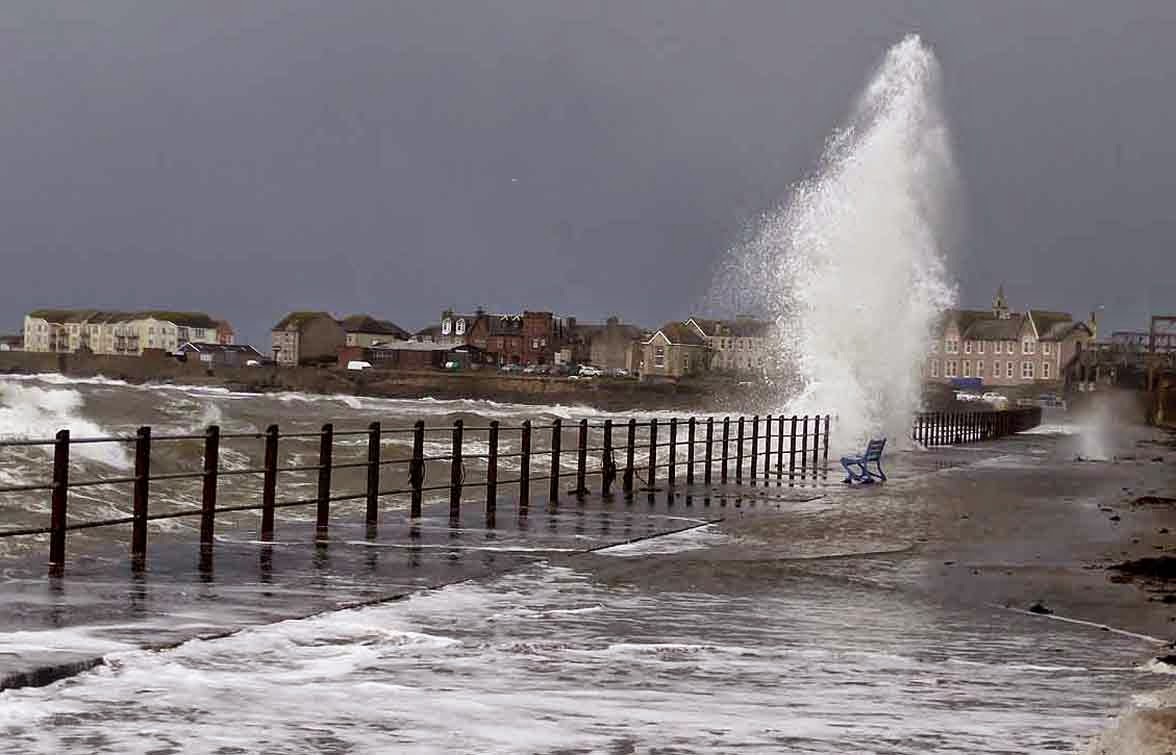 Some more. Two wet socks now and an elbow :o( 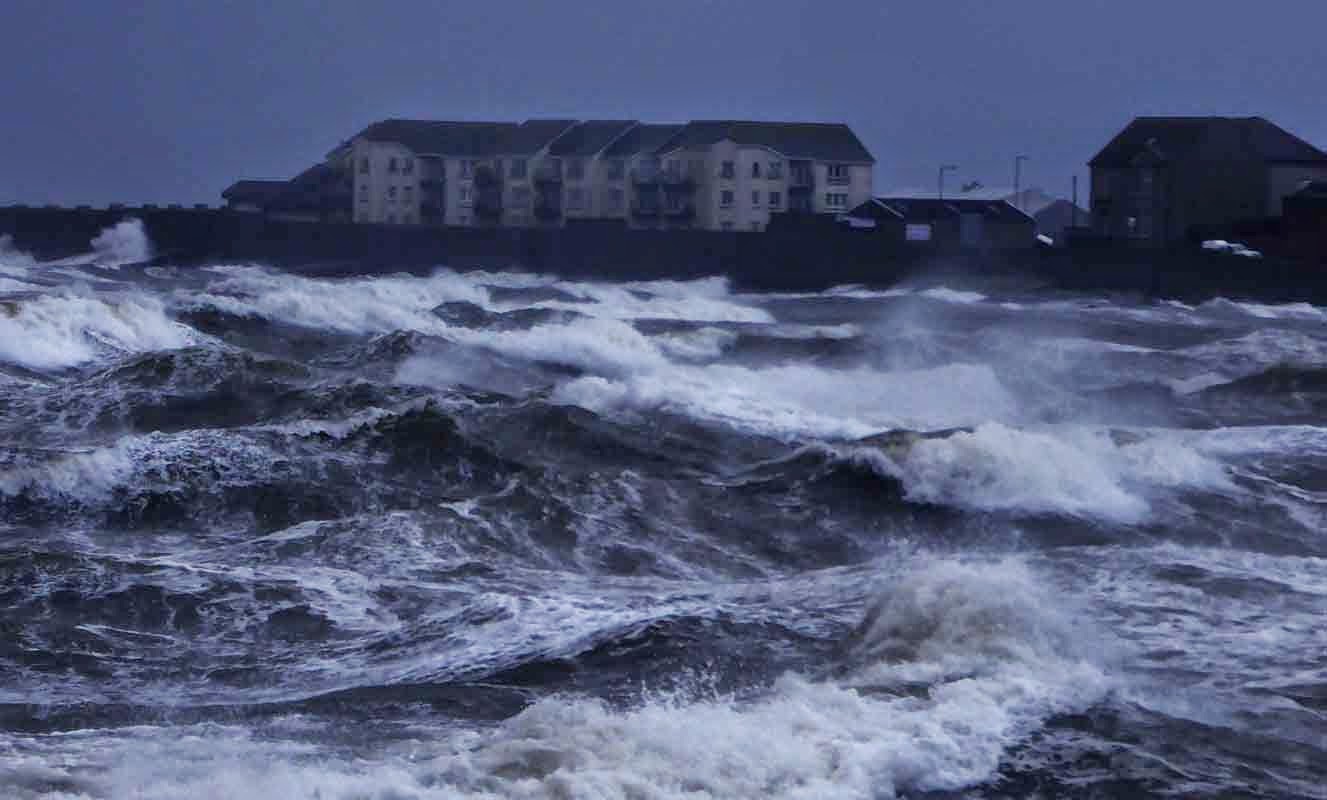 Saltcoats from the esplanade. Pleased with my efforts so far and still largely dry I pulled out my trusty storm bunnet, stuck it on my head, then trotted off down the coast to the next location..... To be continued.


Seen this music group last year and couldn't believe my eyes as they are so completely different, both visually and musically, to anything else out there. Worth watching. Totally unique. They are not so much a group as performance artists.

Hi Anne,
Cheers. I wish it had stayed at just wet socks as part two soaked the rest of me and then some. Hope you have a nice Christmas.

I don't mind getting wet if it gets me closer to waterfalls/waves etc. either :-) Great photos!
Carol.

Cheers Carol,
Don't know if I,ll top these wave photos as that was on the limit for standing upright and taking steady photographs. I suppose I could always lie down.

Absolutely brilliant Bob. I was tempted to head for Portpatrick, but still being full of cold I erred on the side of caution and stayed at home.
Beats Antique aren't David Byrne and Talking Heads, but are certainly unique. Just clicked onto their 'Revival' which was quite entertaining.

Hi Jim,
It wasn't the girl I was most impressed with although she is a trained dancer it was the guy playing violin then drums who has really good skills. I tried to learn the piano years ago but couldn't get up to a decent level and packed it in as it was hours every night after work for practice to learn each new song the piano teacher gave me for lessons. I still like watching good professionals though on any instrument
As you are probably the only one that looks at the videos I'll stick a Talking Heads on soon:o)

Anyway - if that was Hurricane Bawbag - what are you going to call the next one starting with 'C'? ;-)
Carol.

Hi Carol,
The only C I can think of, which always makes me smile, is the course of the first British ships to go round the fractured and unknown South Australian coastline. The names tell their own story... Anxious Bay, Shark Bay, Coffin Bay, and then the punchline...Cape Catastrophe.
Incidentally,the nearby Spencer Gulf was named after an ancestor of Diana and I just found out the other day she was the only present day royal to have direct blood lines dating right back to the early British Royals, Tudors etc.(The present Royals do not I believe, apart from her sons of course :o)
It's a small world.

Cape Catastrophe sounds quite some place - don't fancy taking a boat around there anytime soon!
Carol.

This is turning into a conversation Carol.Have you been kicked off the hillwalking forum :o)If you want to know what I got up to in Australia and around Cape Catastrophe look at the blog archives for Jan 2011 and Oct 2010. Loads of good photos of reptiles, big roos, birds, mountains and coastlines and my big sister and relatives as well. These posts have had a fair number of hits from Australians but I don't think you've ever seen them? No comments on them anyway from yourself so it might have been before we met up- computer wise. Cant remember. Worth a look anyway.