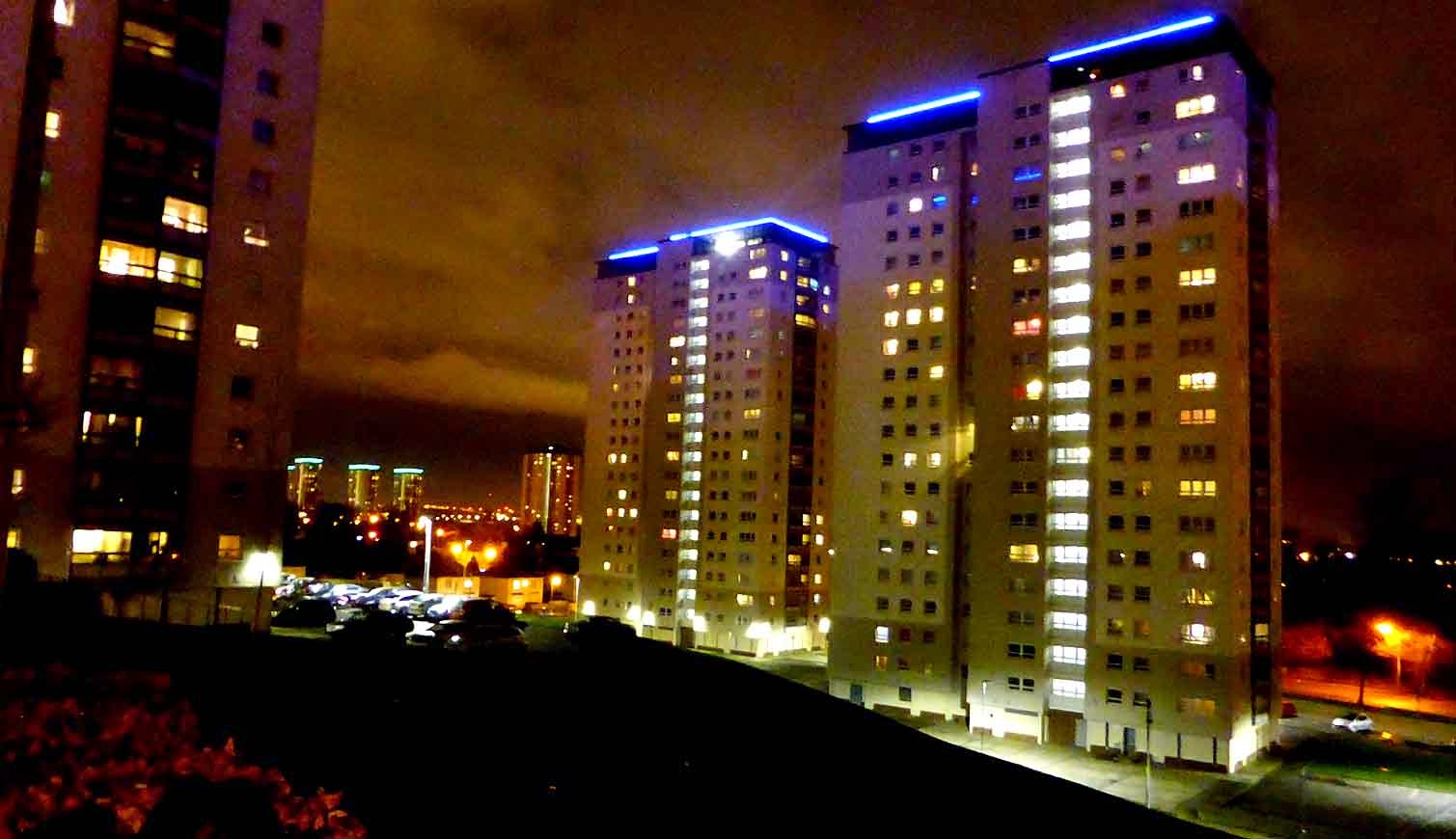 Something very different this time. The result of several mountain bike runs in the dark from Anniesland to Drumchapel, often in the wee small hours, taking in the hi- rise flats of Knightswood and Scotstoun, two areas which have some of the largest concentrations of multi-story flats left in Glasgow.
This post is best viewed with the lights off throughout to create the right atmosphere. Some photos are sharp, others are muted with abstract filters until they resemble the night time paintings we are so fond of creating....... 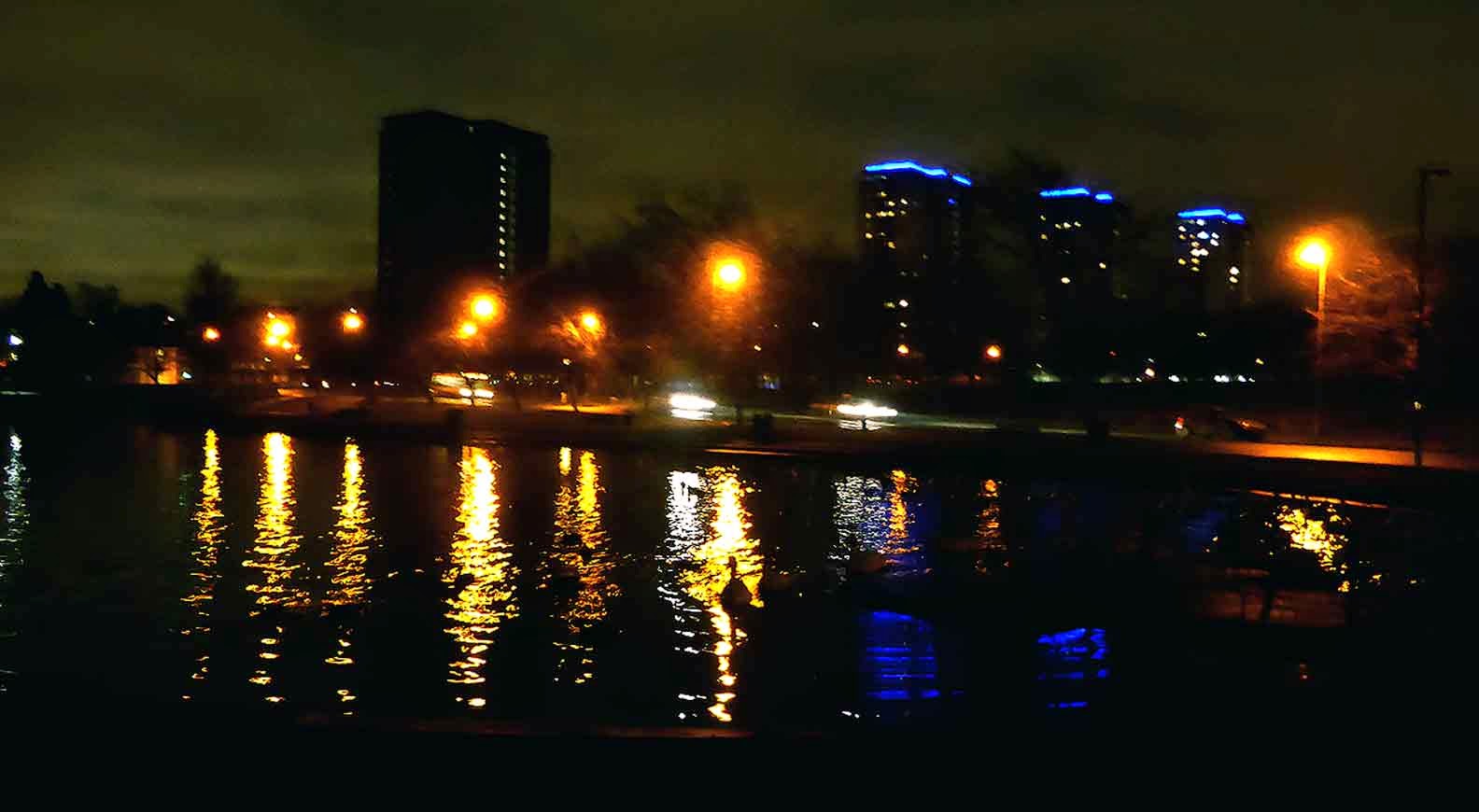 Call us Legion... for we are many

In the beginning there was darkness... and then a light appeared. The first alter rises. When witch was witch and not potential wife... 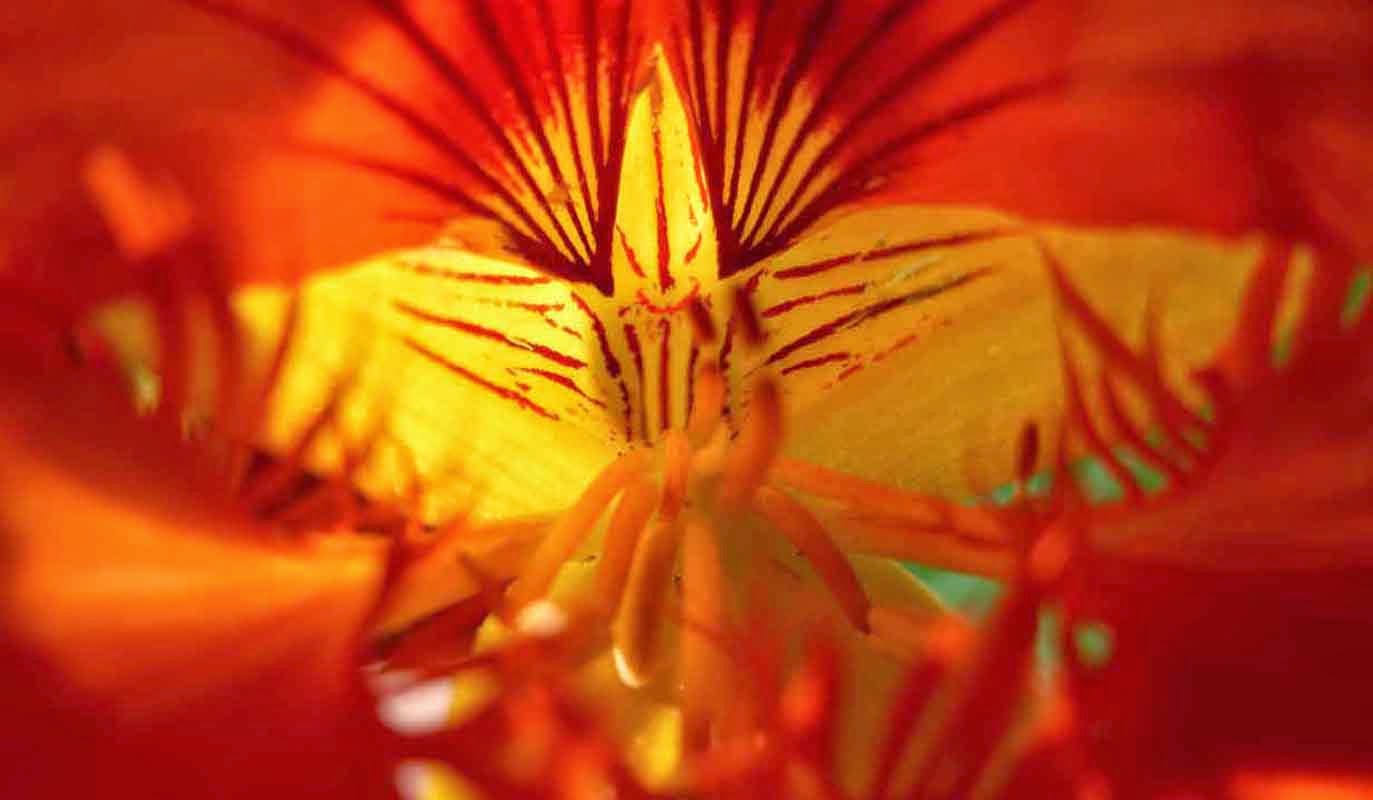 "C" came into being. 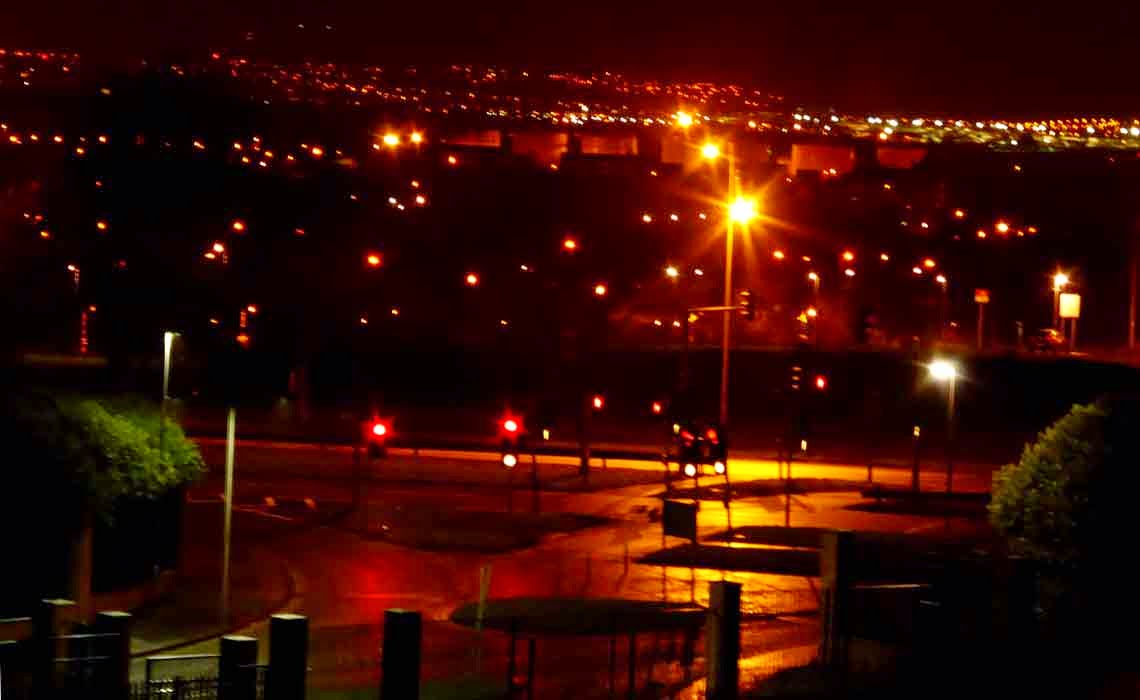 This "I" formed on the edge of a large city. Blood on blood, flesh on flesh, life piled above life. 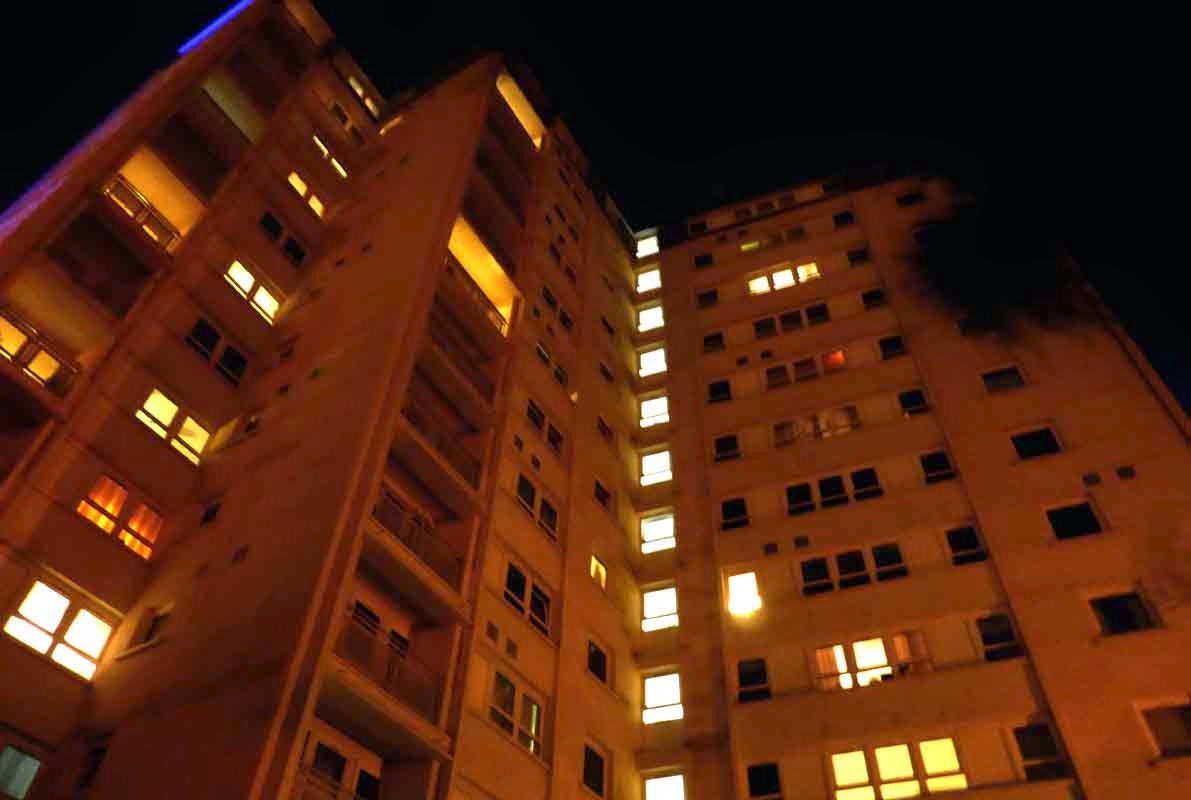 Inside these illuminated leviathans of  the modern age, rising from black depths in tandem together..... From London to Glasgow... the sprawling metropolis of Babel goes to bed. Tiny squares extinguished across the land, one by one. Like living Advent Calendars. Even these great cubes eventually sleep. 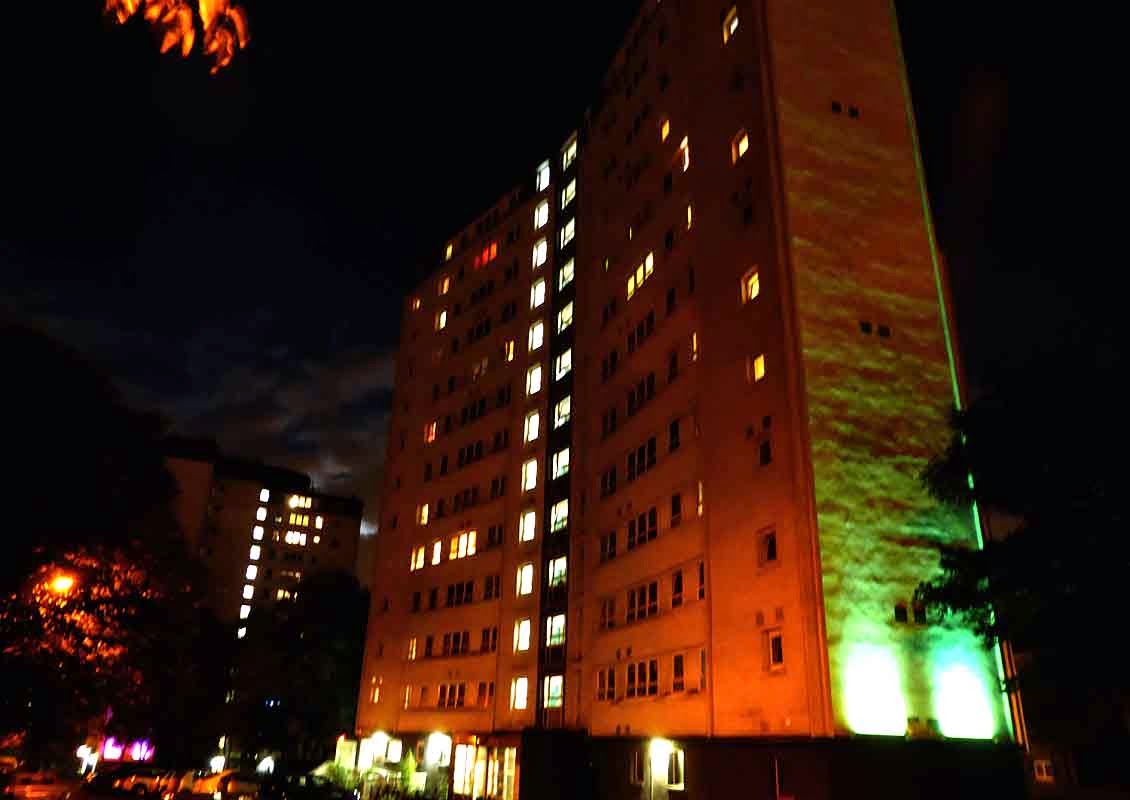 Tower on tower, level on level, tribe on tribe, bone on bone. The "Henge" culture of this era. 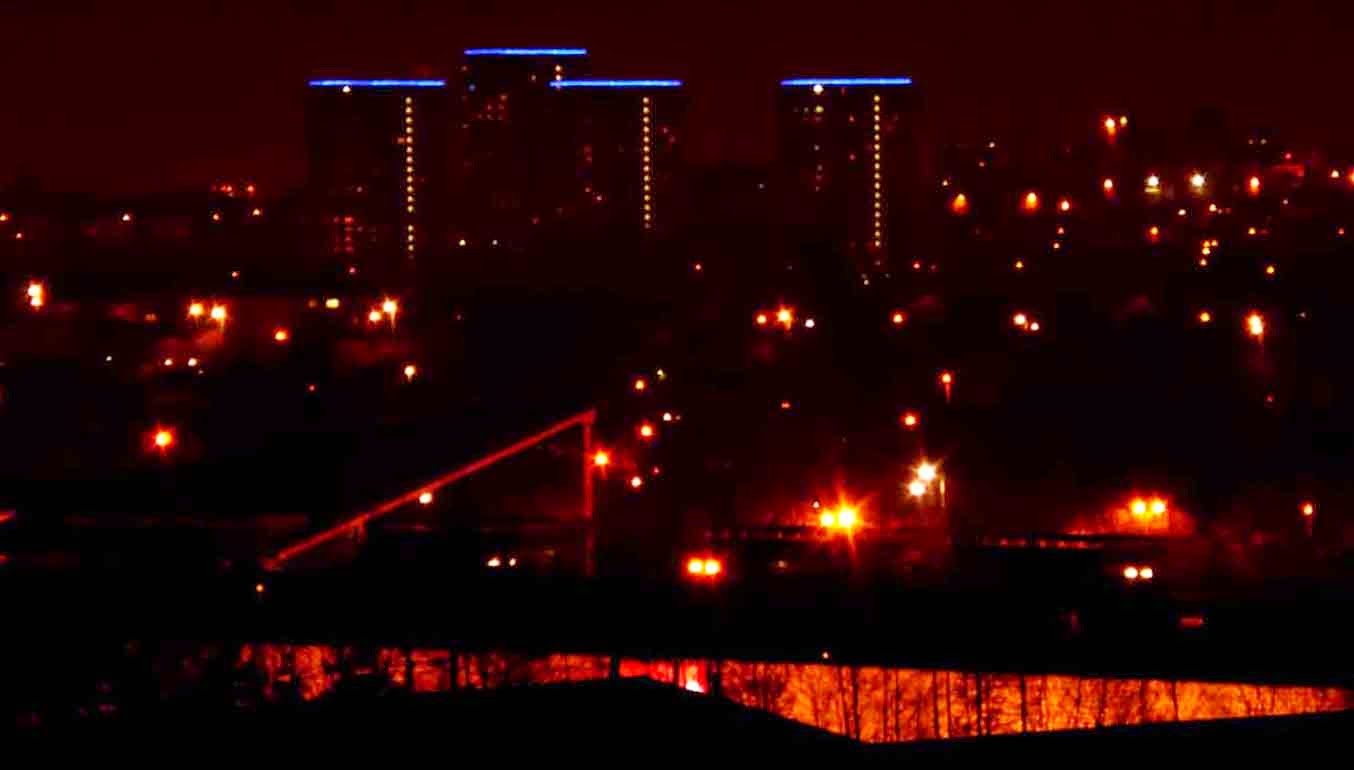 To explore it... but not as a human knows it, but as a 'something else'. A fox view, a  fossa view... my wolverine within. 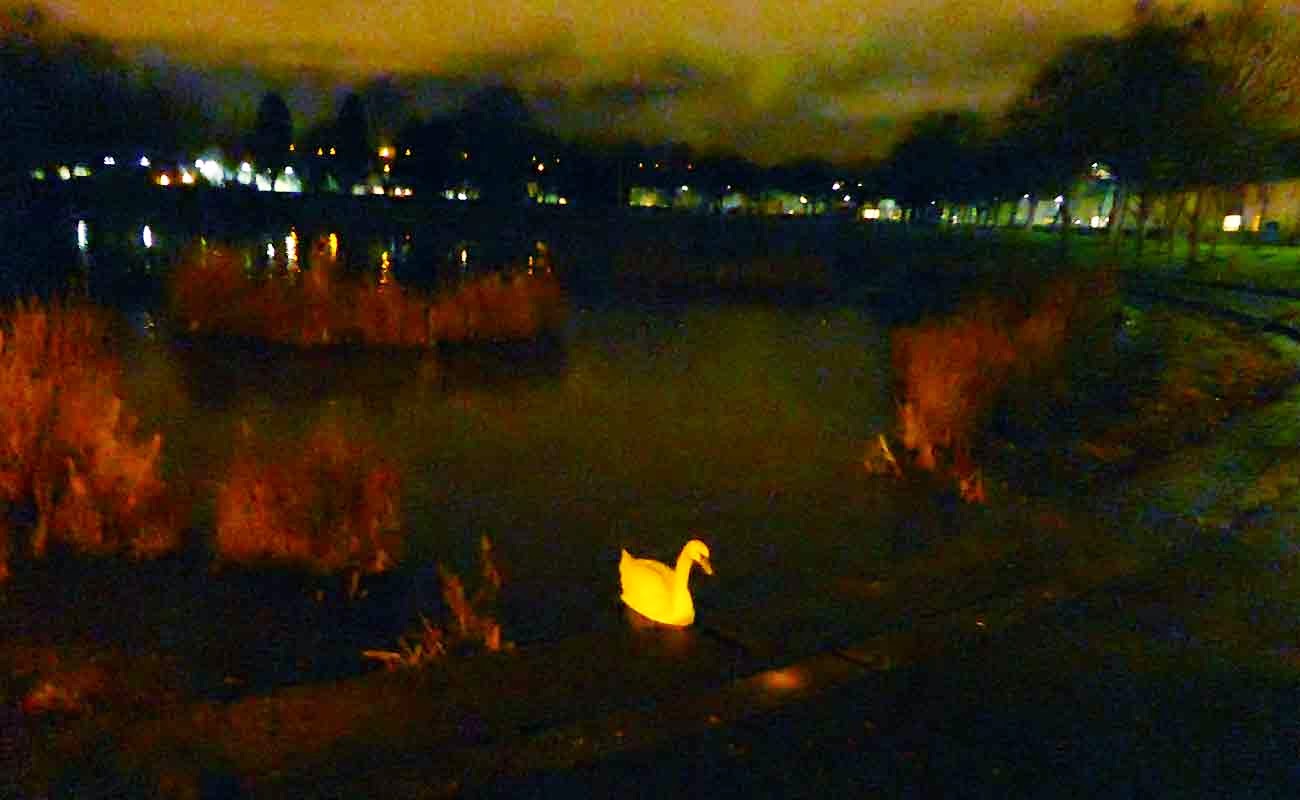 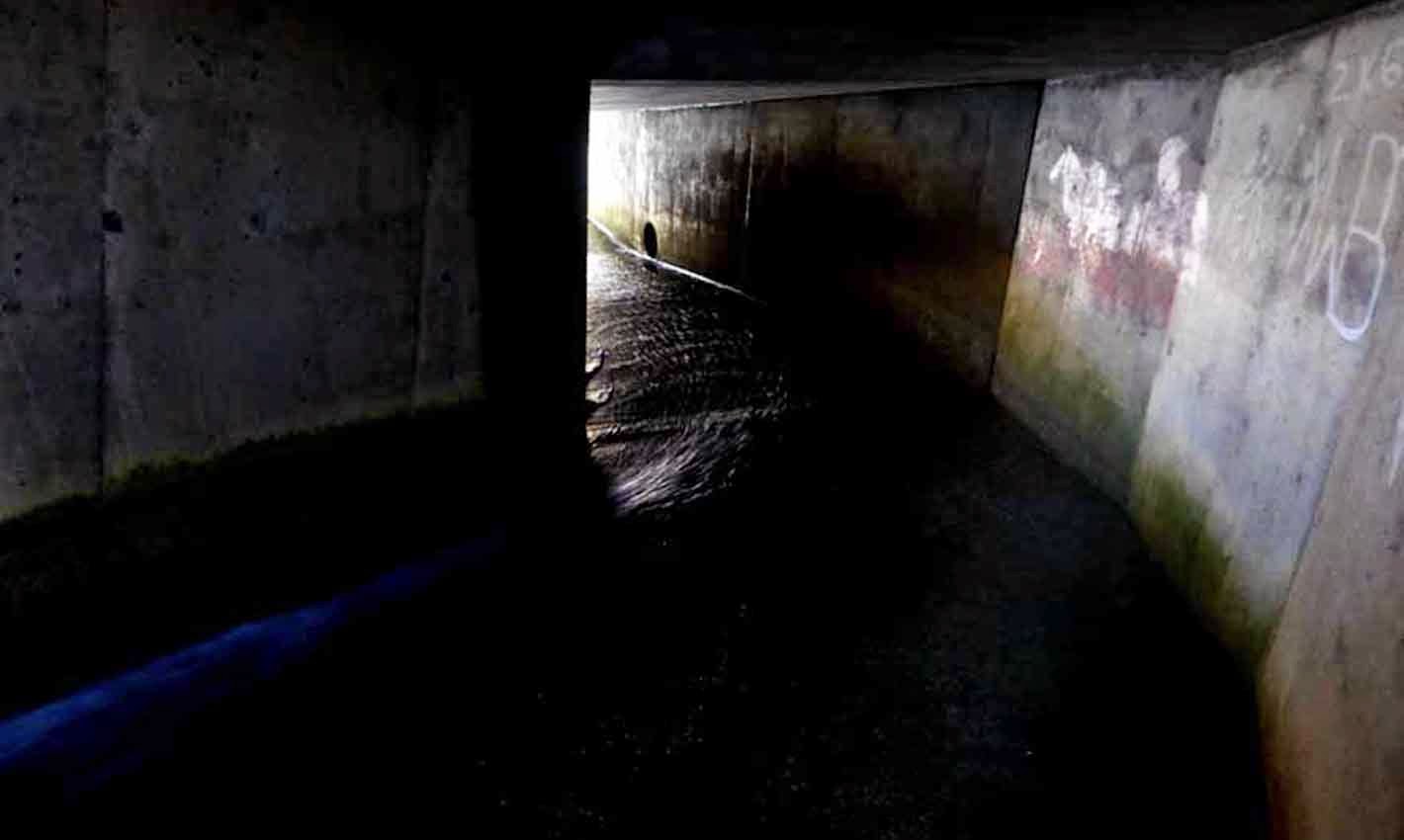 Someone's lair.... perhaps. Eeyore's gloomy place no doubt, or some other pitiful beast of burden?
Is this the next step after food banks? People living in tunnels and caves again? Couldn't happen here? Well, 20 years ago no one had heard of food banks in the UK- now it's perfectly normal. We usually take our cue from America in these matters and tens of thousands already live in underground tunnels there. New York City is full of underground tunnels and sewers and at 20 below in winter it's the best place to be if you are homeless and desperate. The gap between the have and have not's in western culture has never been greater in modern times than now and it is still accelerating yet we are constantly told the economy is recovering. For who exactly? This current government seems determined to privatize the NHS and we might well find we end up with a situation in the future where if you haven't got private medical insurance you are up shit creek.
Welcome to the mostly hidden world of the tent cities and the mole people. This makes interesting and worrying reading when you know that most of America's solutions to social problems eventually get adopted here.
http://www.pakalertpress.com/2013/04/11/the-tunnel-people-that-live-under-the-streets-of-america/ 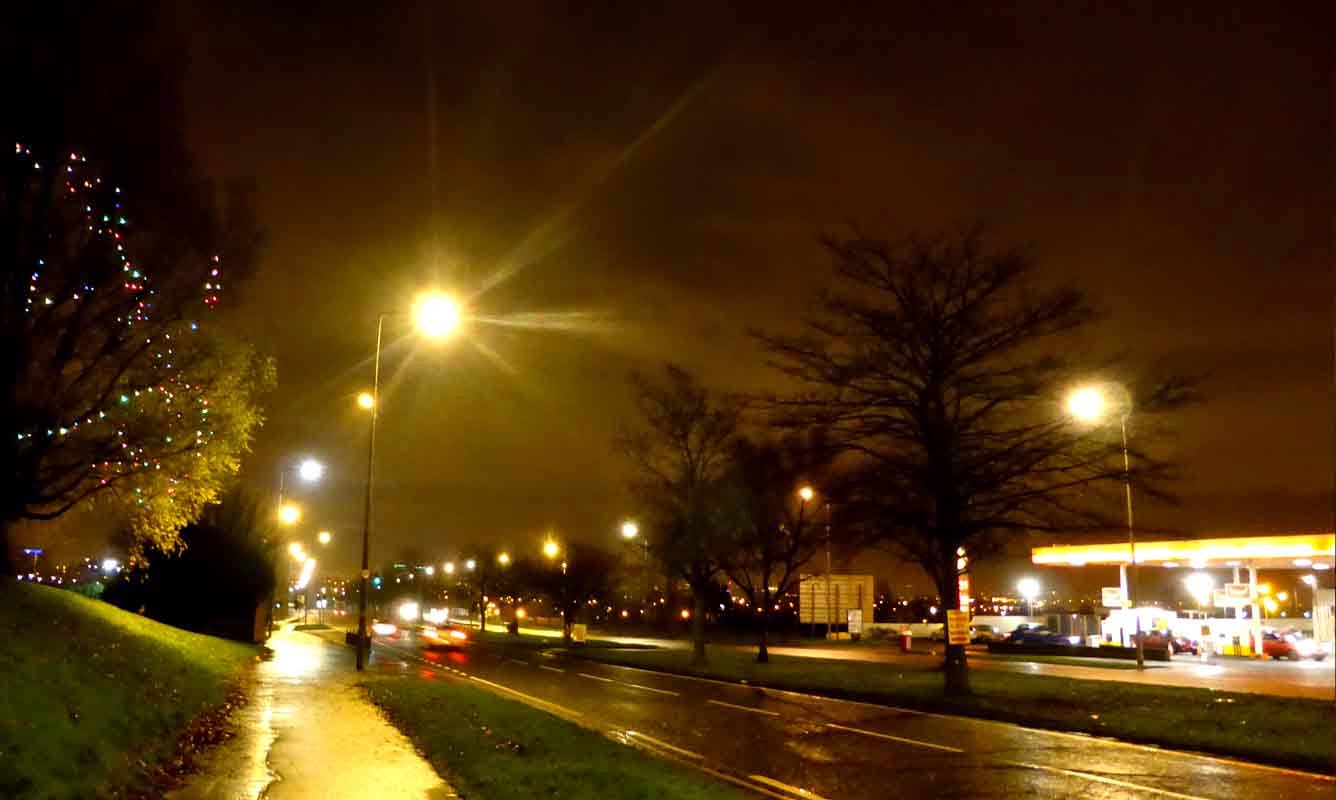 Christmas approaches fast in the city. 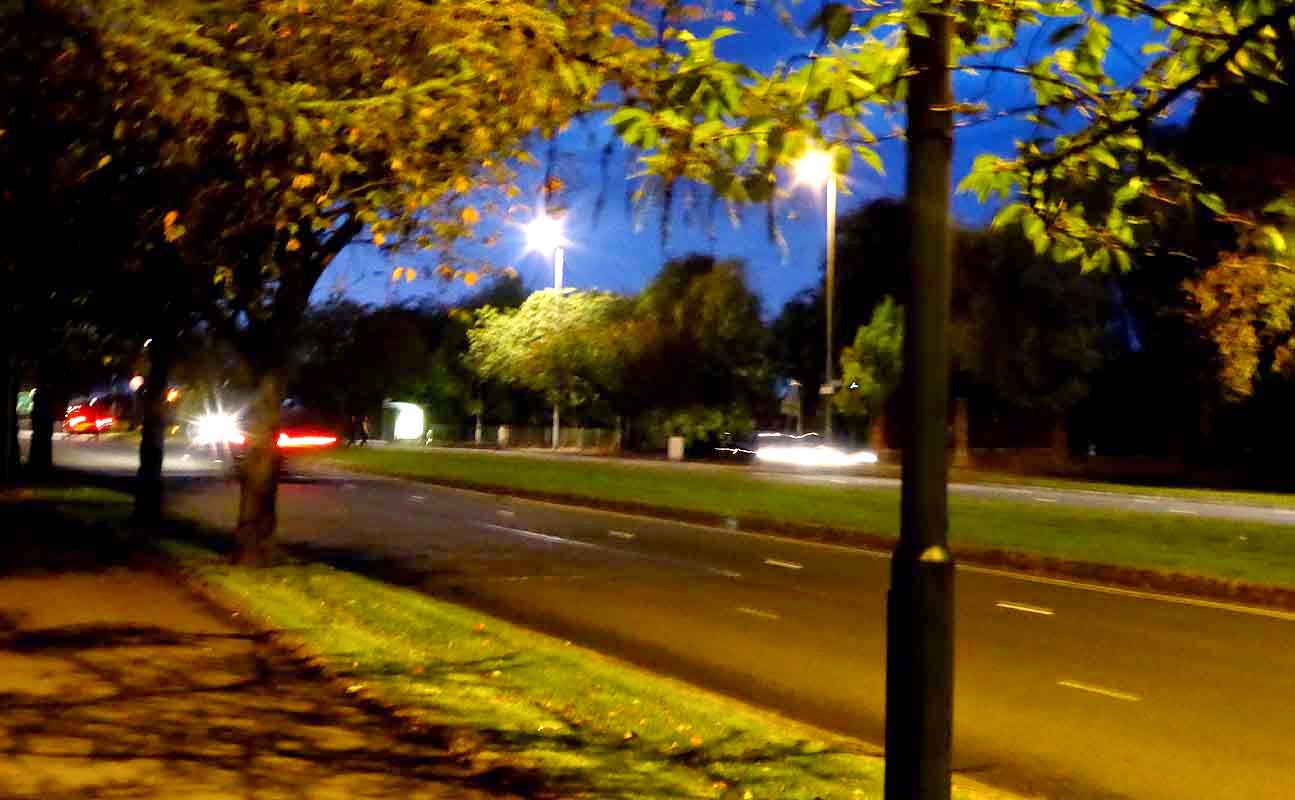 It's dark by 3:30pm now on dull overcast days. Grey, mist ridden, and uniformly unappealing for most of November and early December the streets and landscape around me seem far more colorful and interesting in the dark. I take to legs and bike to explore. 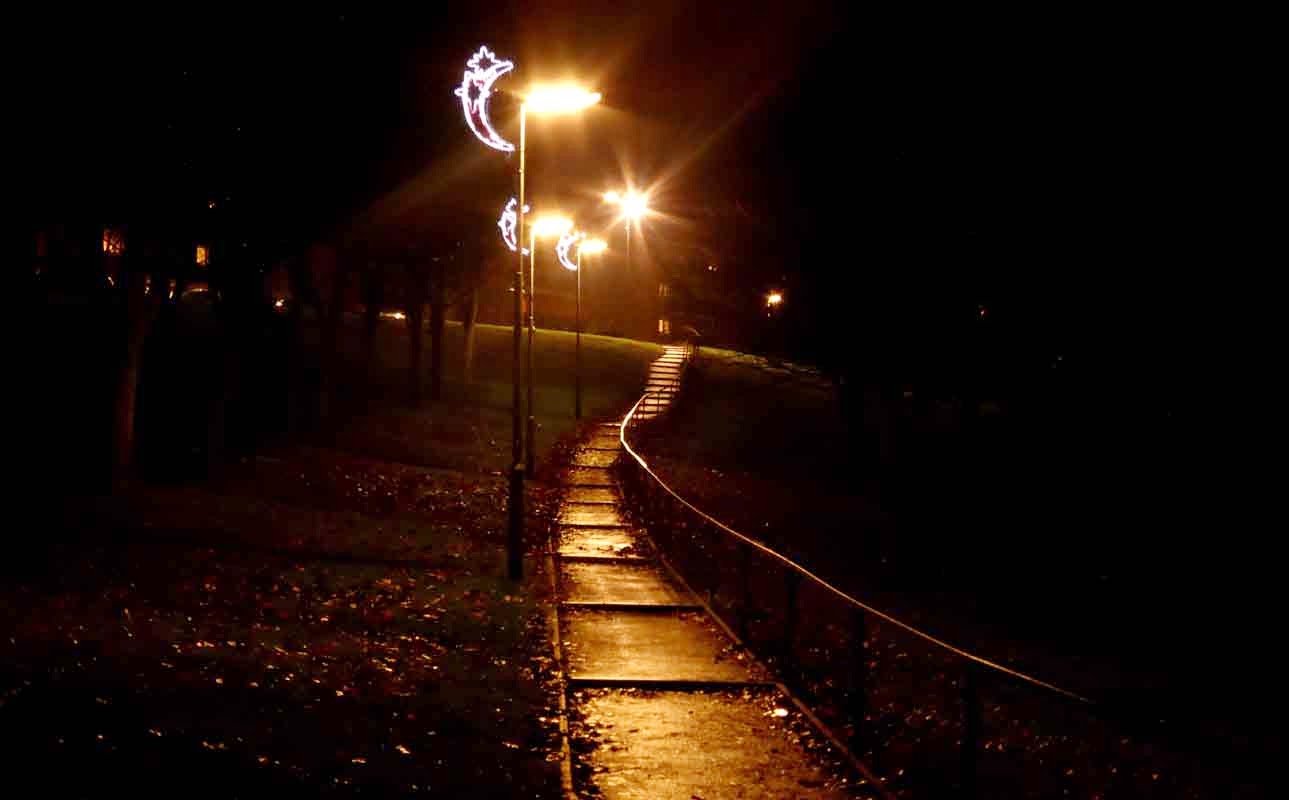 People head home to warm caves and tenements stacked high on the tops of hills.Christmas presents are carefully wrapped. Glasgow is after all "The Drumlin City of my Dreams." 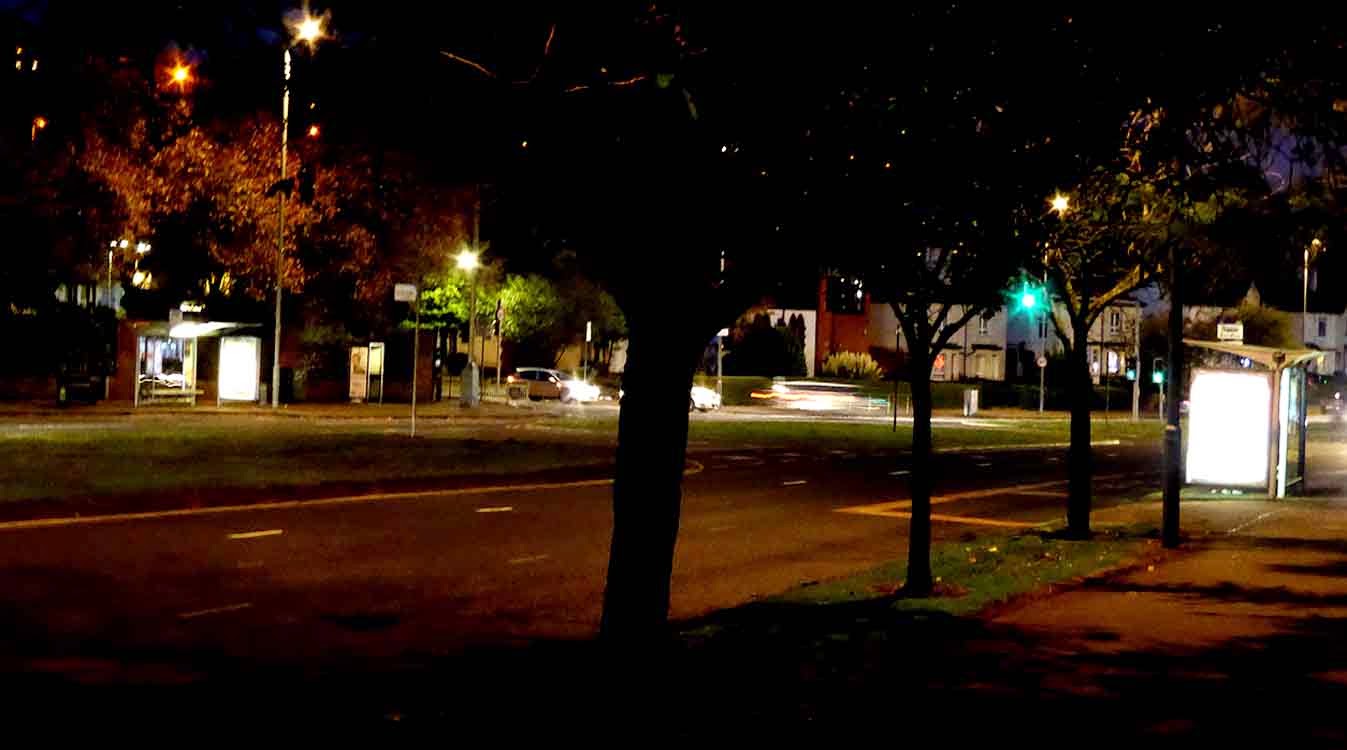 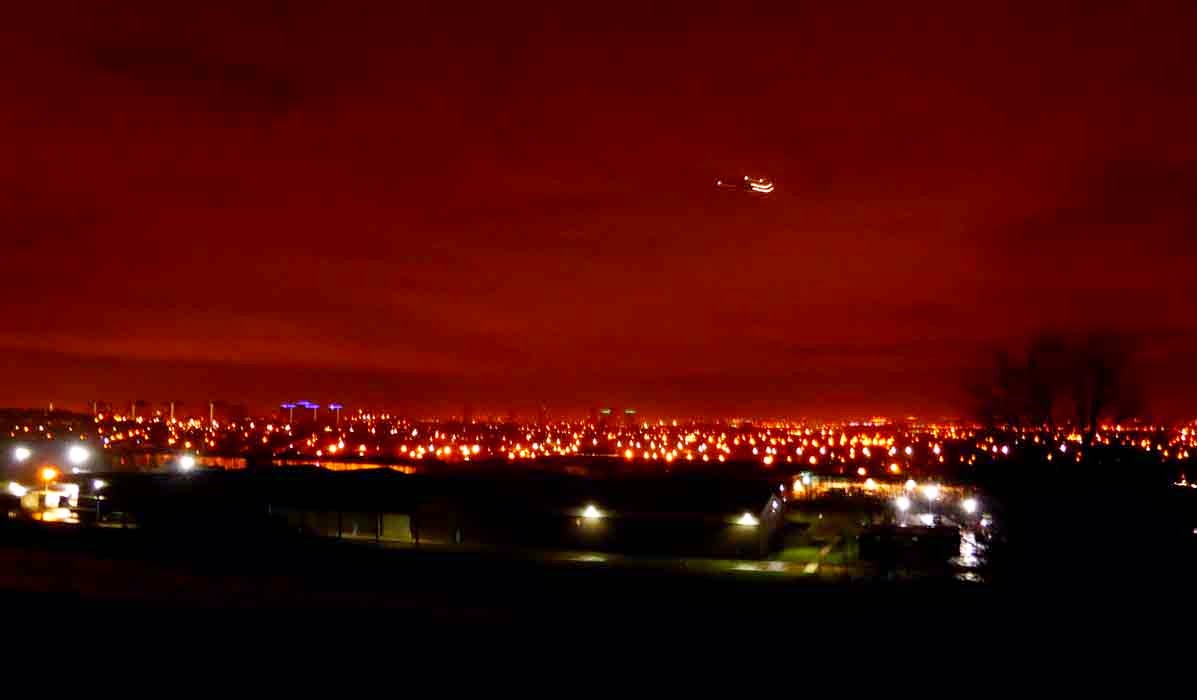 The city is locked up behind doors and safe. Plane landing from a journey to find the sun. 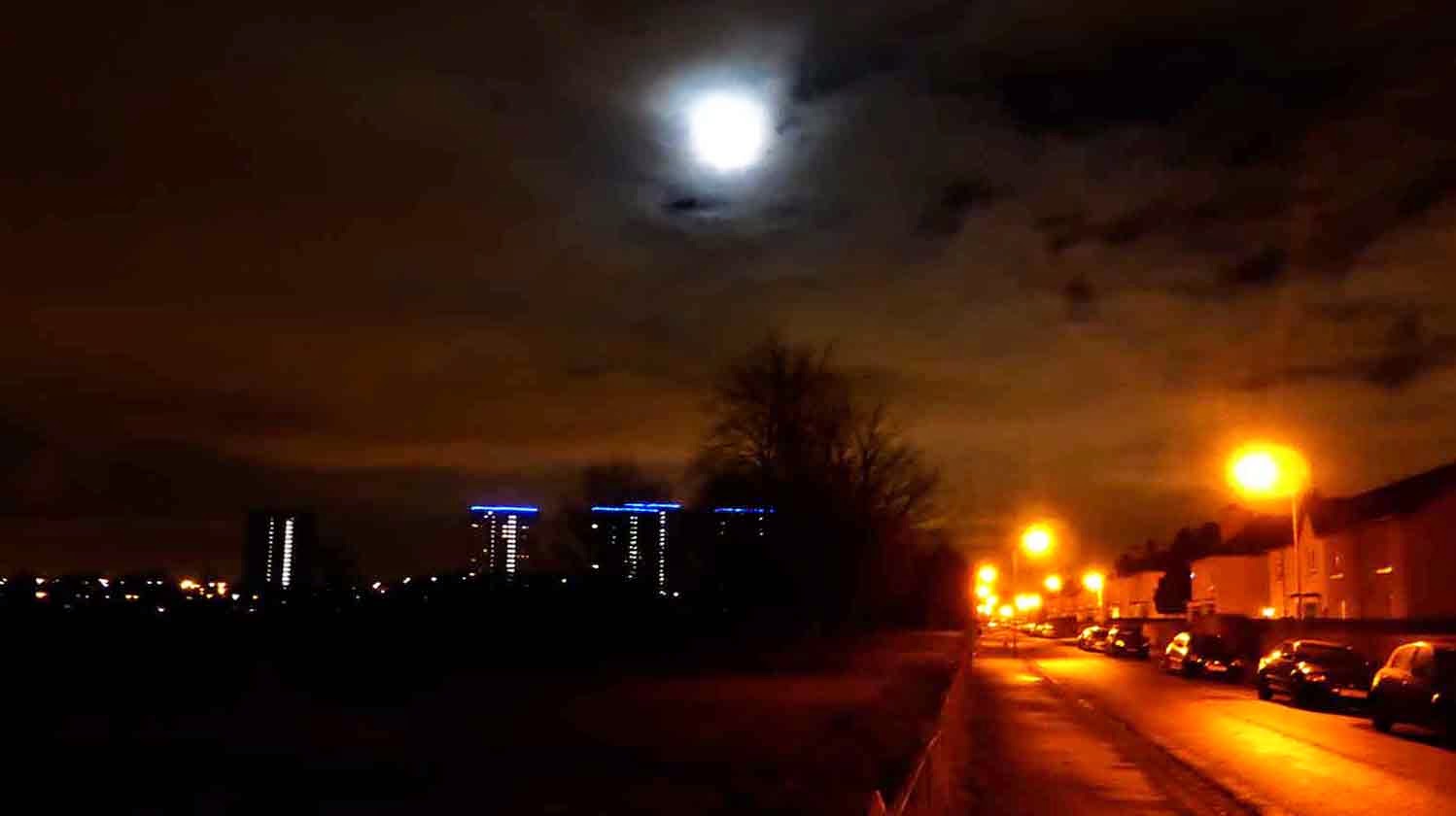 A half born emerges. So many long hours to kill in darkness at this time of year. Witch upon witch, blood upon blood, star upon star, furry mound upon furry mound, life against life. Moon takes the stars away from a lonely, tortured"Caliban" who slinks into the shadows of the golf course, seen above. 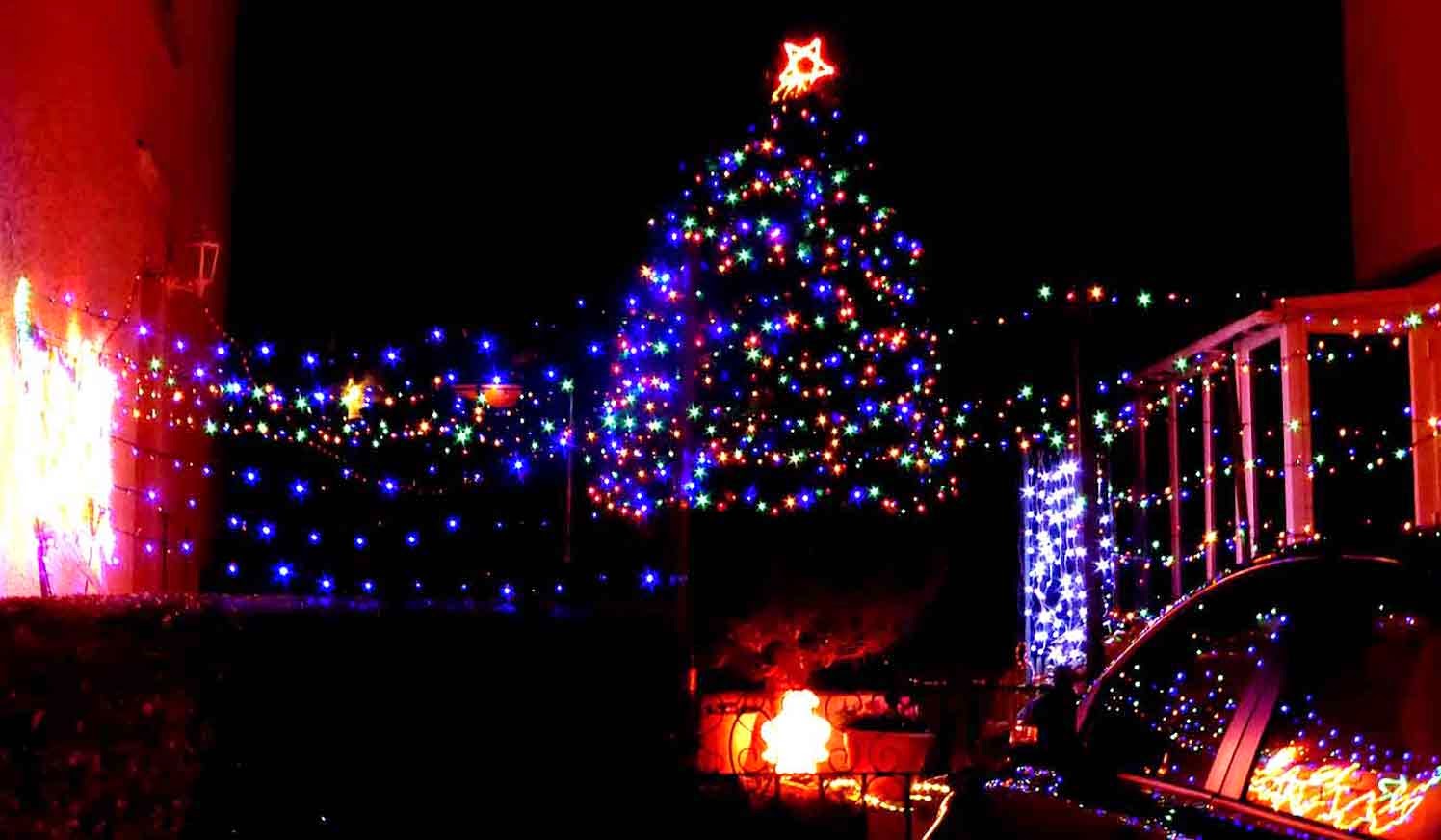 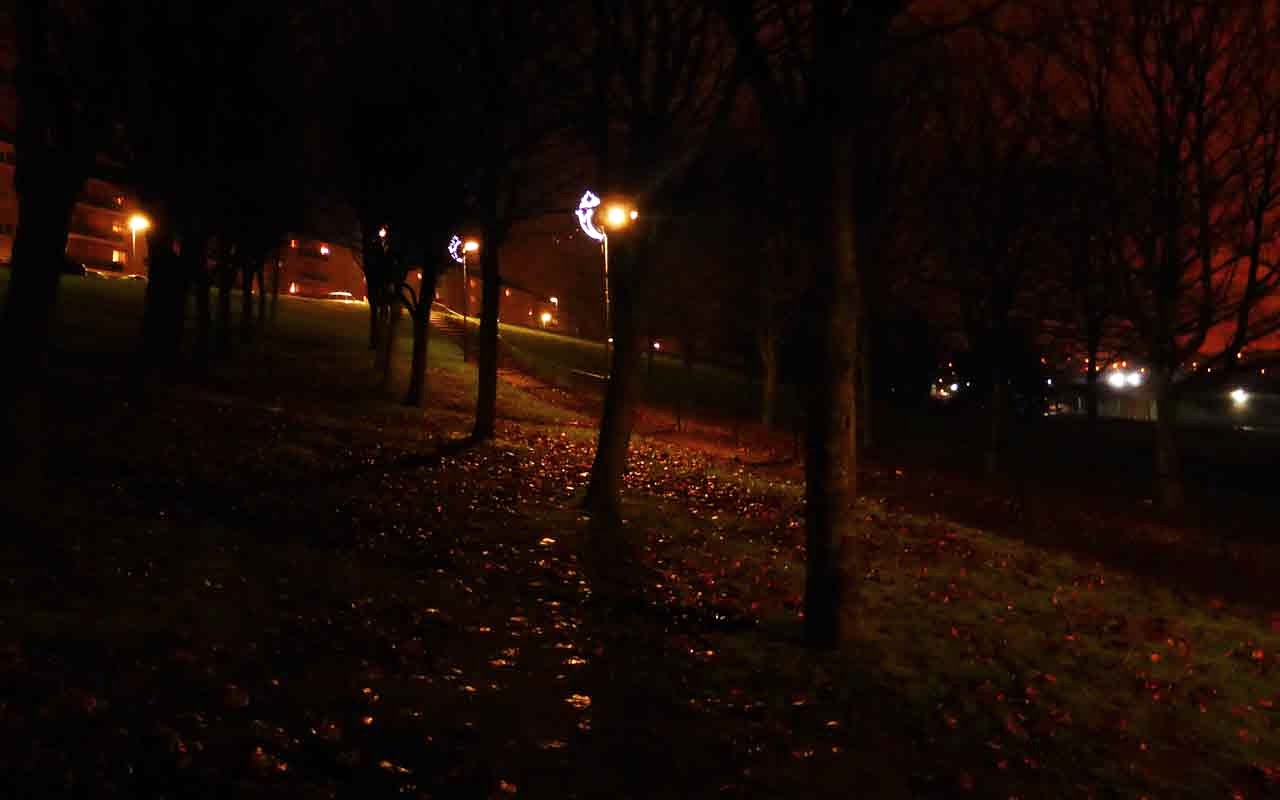 Keen to keep to shadows, the dark margins of the city engulf your shy and wary companion... always half revealed, ever formless and indistinct. An edge of vision ...vision. 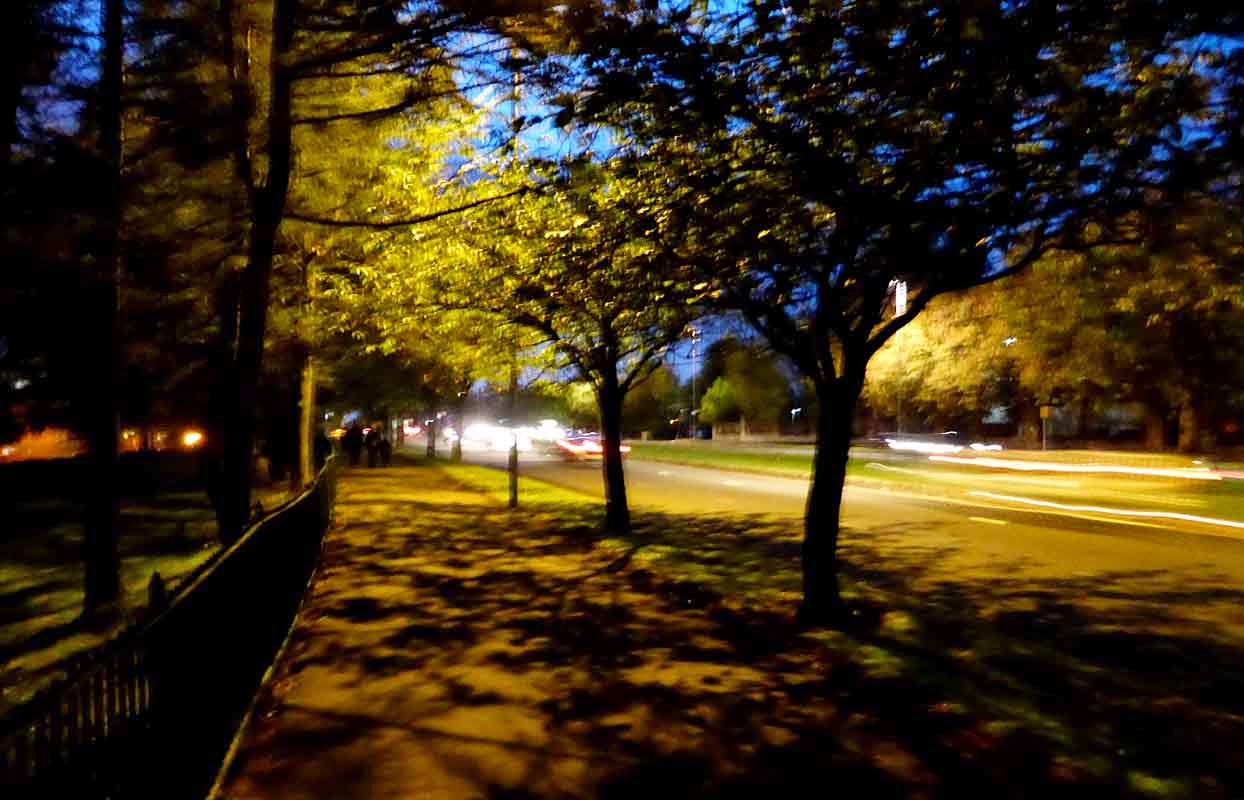 Skirting the perimeter of a park. 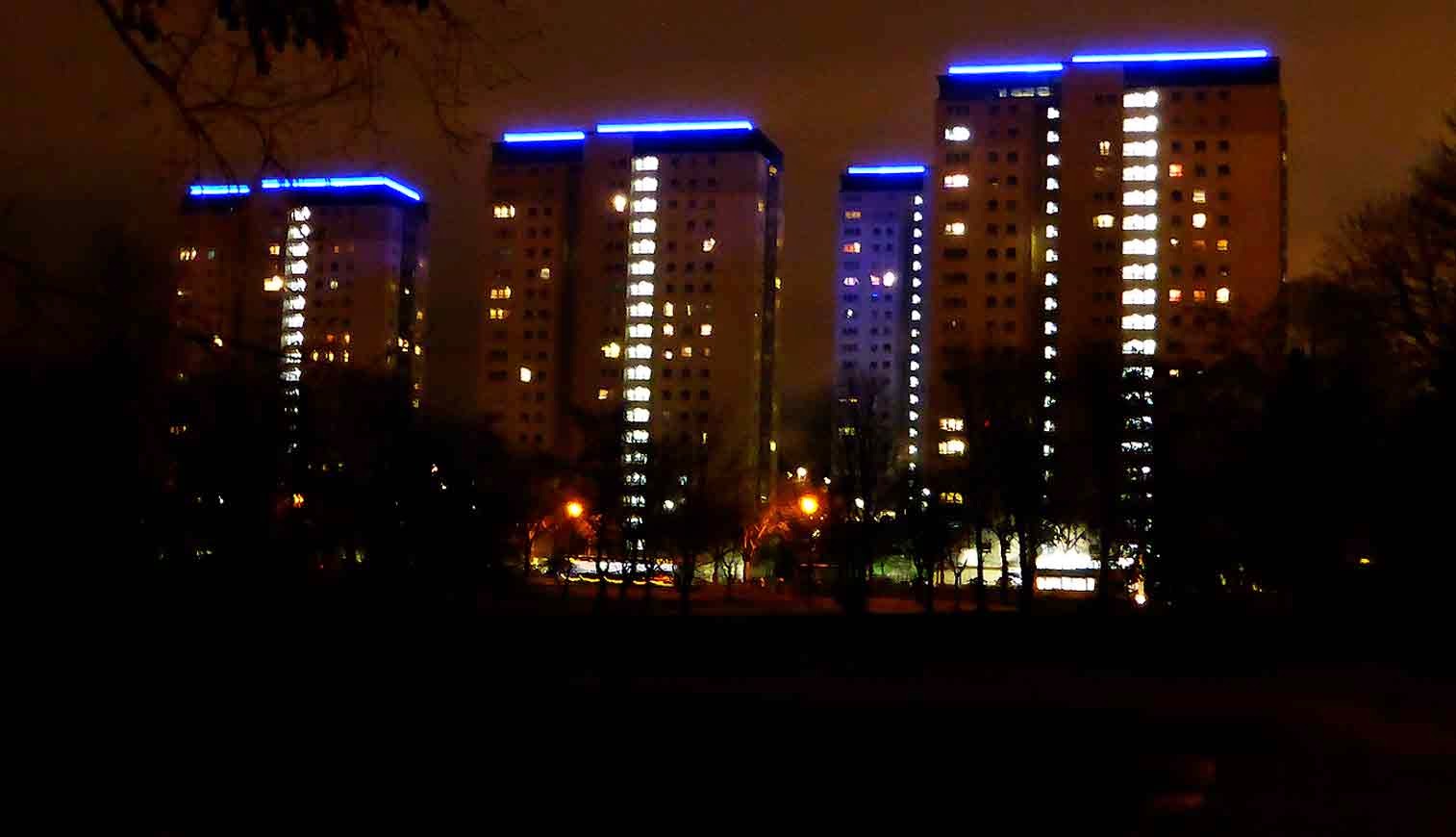 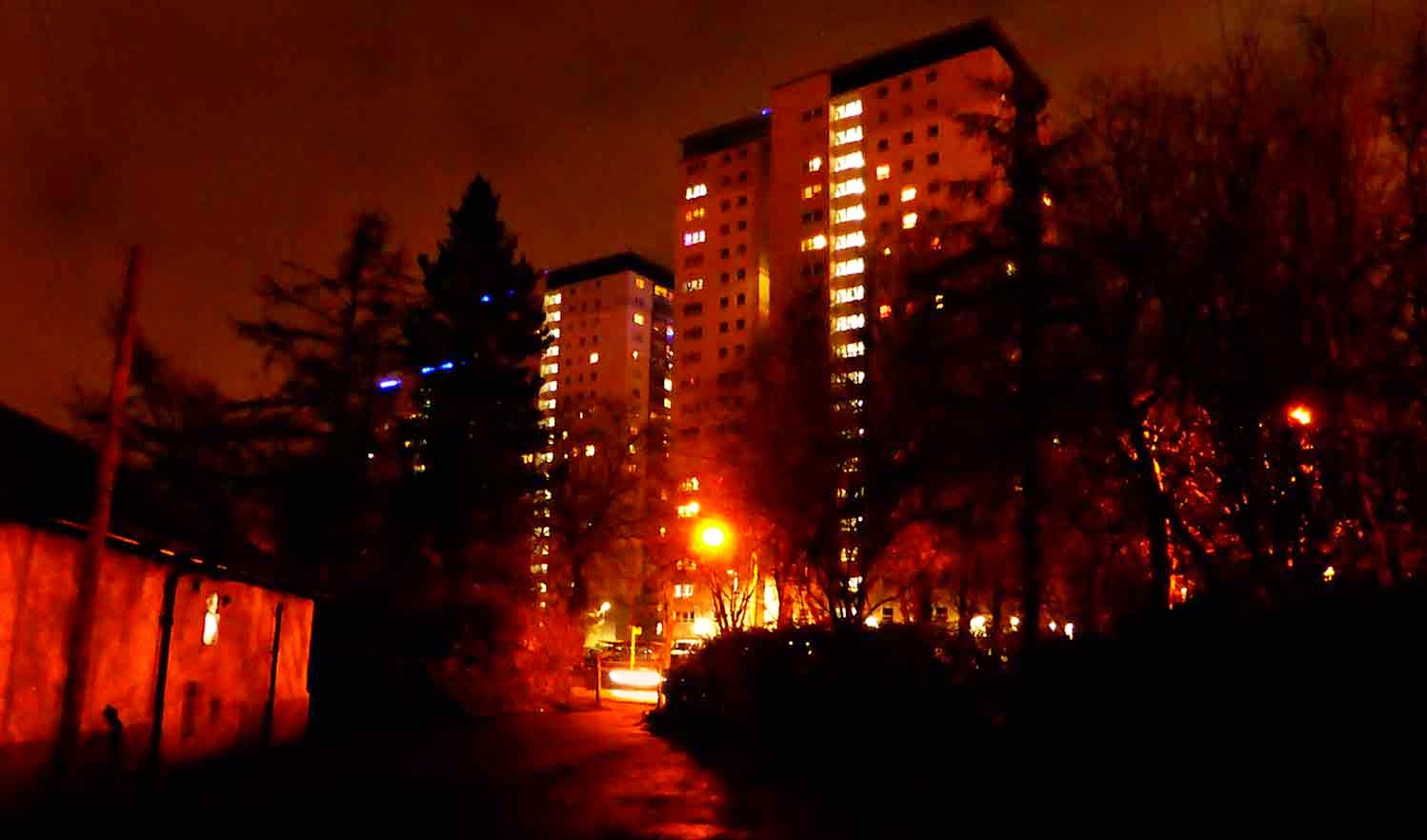 Prowling the lanes yet leaving no paw print.... no blood left to seep for hungry Caliban to find. 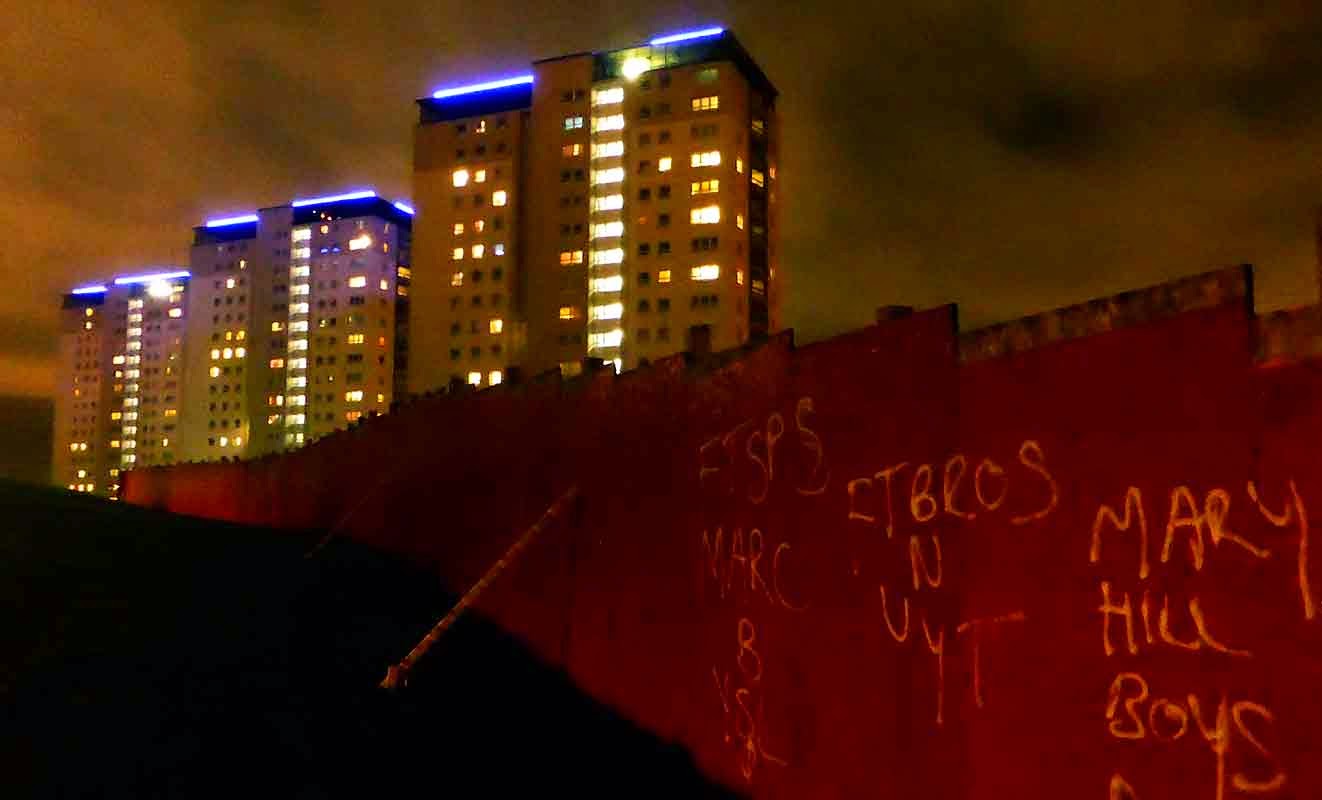 Always on the other side of that wall.
Centuries ago many cities were once gated and guarded at night for safety. Now it's open season again away from the CCTV cameras. 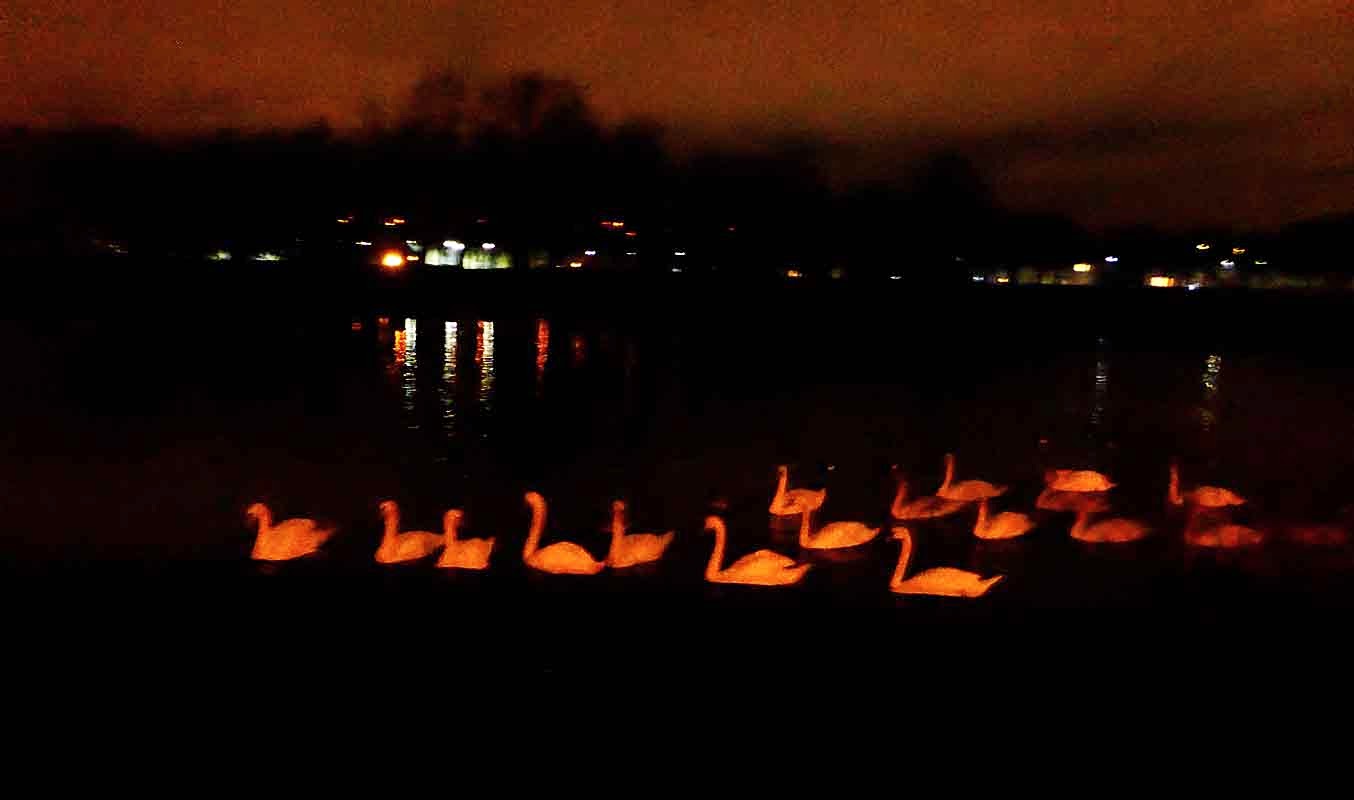 One trusting swan not fast enough this time. 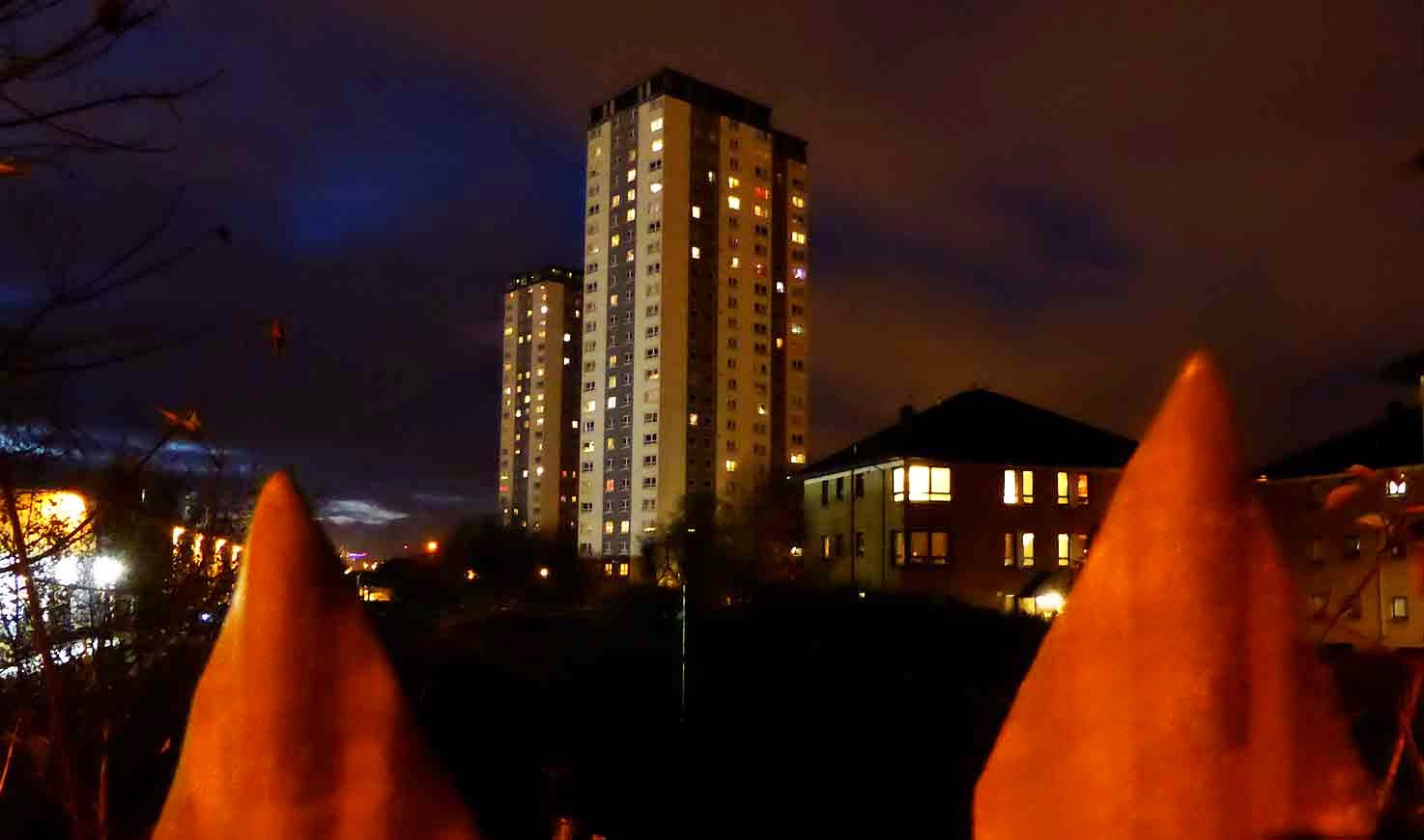 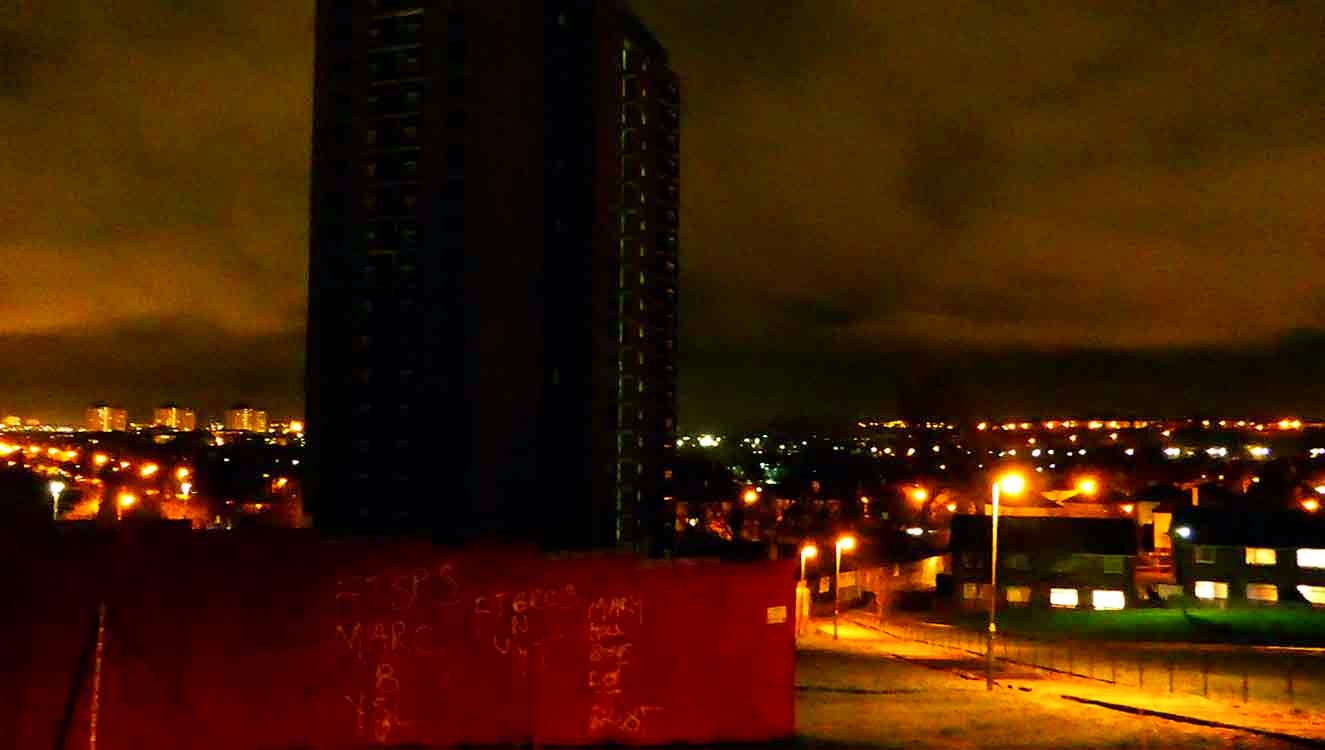 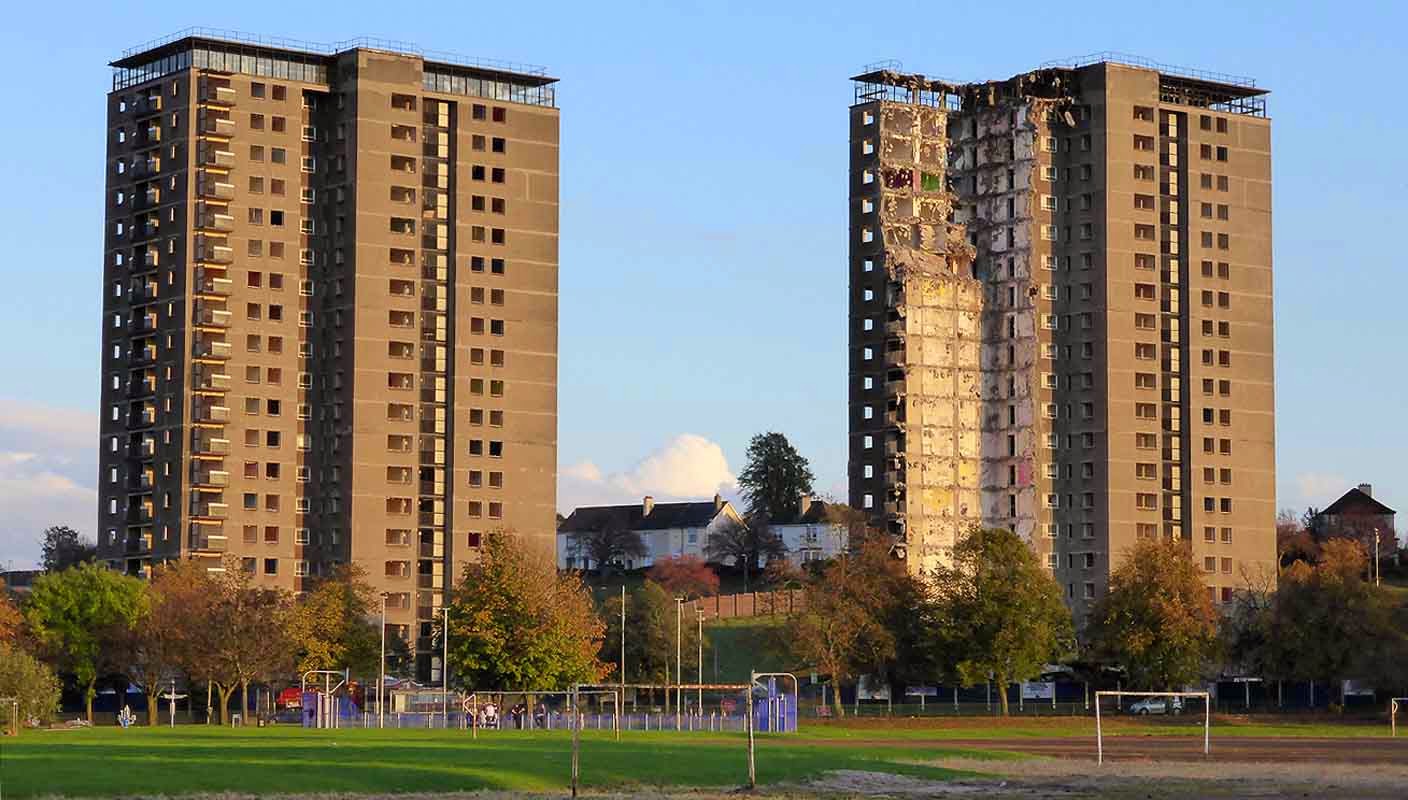 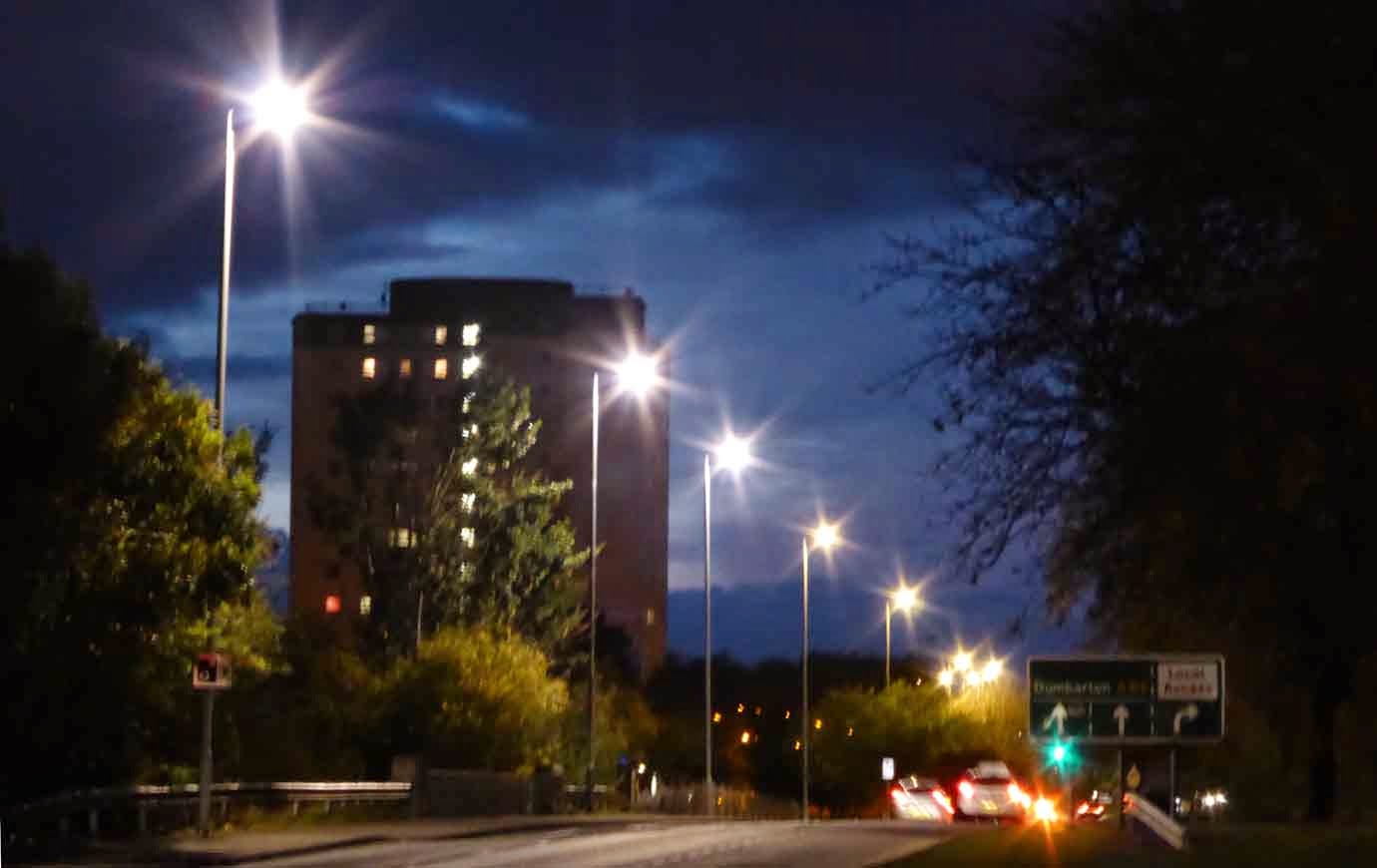 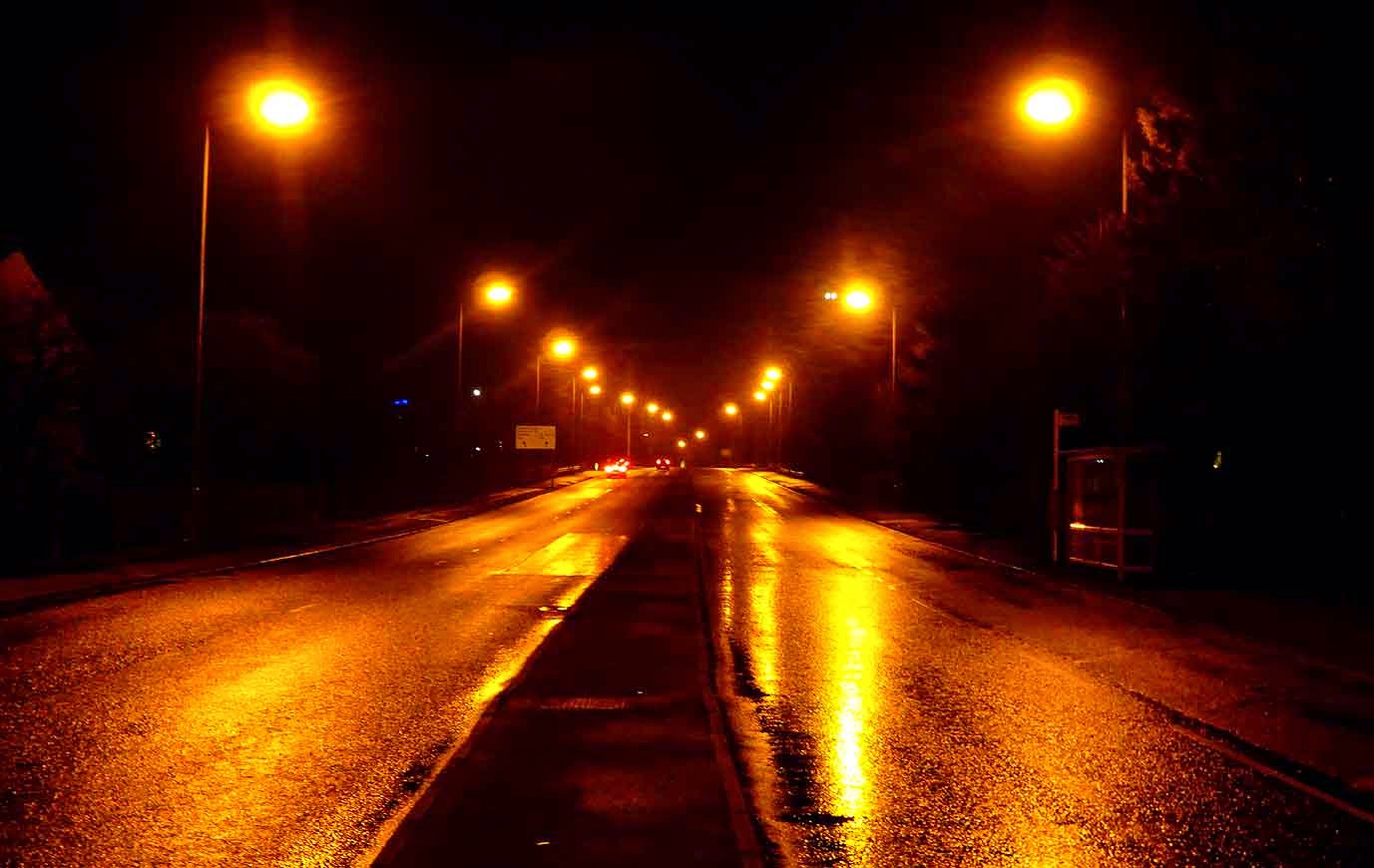 Where streets are always lined with gold.


Many years ago I stayed in the Cotswolds but cycled through the Mendips, the North Downs and the Gog Magog hills exploring everywhere, often cycling back to the rented cottage late at night. The beauty and appeal of these small hill ranges, often sheltering little patchwork pockets of bright neon in deep valleys within them and the sea of dark lands all around made a big impression on me cycling across empty and pitch black minor roads between scattered pin pricks of habitation. Scenic and safe feeling during the day these upland places changed completely after dark and even the main streets in tourist villages then (late 1970's) had little in the way of adequate street lighting with ancient lamp posts far apart and ill lit. Some of the smaller villages seemed to be illuminated by glow worms such was the output of generated light between warm pubs and pints of delicious scrumpy. Beyond these picture postcard settings however the dark was absolute and unfamiliar places visited in the hours of darkness are always slightly menacing and strange.
My reward was a meeting with a pure light - a rare find in a southern plot to be nurtured and tended before transplanting into a different garden altogether in the colder north. I was a collector of things back then you should know.

Another daughter of Kent and a similar nocturnal inspired theme... Some of the fan made videos are better than the official offerings nowadays and this is a case in point. Memorable. A good night time driving tune with a slight jazz rhythm underneath.

What's with the blue lights atop the tower blocks Bob?

You've got some absolutely superb photos there - I wish I could do night photography but I haven't a clue. I know it would just be a time exposure on my film Zenith but I wouldn't know how long for etc. I wouldn't have any idea how to do it on my point-and-shoot digital and I'm not sure it can do night photography. Love the swans in the dark photo :-)

Richard was saying the other day that, sometime soon, we ought to go off and do things like the Mendips, Cotswolds, Ridgeway etc. I'm sure he's right...
Carol.

A grand look at the city Bob, some really good pictures. I watched a documentary called Dark Days that also looked at the plight of those living underground. The rush to cities from the countryside has certainly increased since I was a boy.
Great Kate Bush song too.

Round our way, the rush to the countryside has increased in a big way - I wish it would go the other way and then we wouldn't have people in our villages ripping out and tarmacking/ concreting their gardens, complaining about livestock making a noise etc. :-(
Carol.

Hi Carol,
A modern addition when the flats get renovated. I assume it's to prevent planes and helicopters crashing into them as I remember a police helicopter hitting a block of flats at Eastwood toll years ago during a snow storm and the Clutha pub of course in recent times although that was a drop in through the roof. North West Glasgow also sits right under the flight path for Glasgow Airport and many of the hi rise flats sit on hills.
The Cotswolds have some lovely walks and the Malvern Hills end to end make a great full day walk but I cant see you being happy there somehow. Richard would love it though and Stow on the Wold in Springtime is a great base for exploring the area and for cycling tours.(That's where I stayed anyway and it's central to the area)
When I first traveled around the West Highlands most of the locals had already moved out(1970s)and I was amazed to find a strong Newcastle or Durham contingent around the An Teallach area. Torridon was full of Londoners as was Eigg and Skye. Most incomers only last 4 or 5 winters though before the incessant rain gets to them and they move elsewhere. I know a lot of Londoners have moved out to Lincolnshire and the Norfolk/Suffolk villages and the whole of the south east is similar. Maybe you've just been lucky you have been untouched for so long as I've been bumping into Yorkshire folk living throughout the Highlands for over 40 years now :o)

Hi Jim,
Cheers. I remember reading a great book about the hidden tunnels under New York in the 1990s. It was a follow up to "Relic" called Reliquary and the writers described people living in the tunnels in great detail and it was the first time I'd heard of the Mole Men or the legendary underground railway for billionaires and presidents which still exists under the city, largely forgotten, to this day. Both books were New York Times bestsellers.
As you probably know Glasgow actually doubled in size every decade during the late 1800s until around 1910 when it was the forth largest city in Europe. Now most of the post industrial cities in Britain are actually shirking in size as they cant compete with London for jobs which has grown by about 2 million since 1980. The downside is ordinary people can no longer afford to buy a house there so they move further and further out into the villages which soon become dormitory suburbs as they spend longer and longer on trains :o)

Actually, funny about the Yorkshire folk in Scotland - when we were up in Sutherland, we went into a tea room near Canisp and found it was run by a Yorkshire couple and the 2 couples in front of us were from there too (not to say the 2 couples were living there though, probably just visitors like us). It seemed a bit like a 'Yorkies' convention ;-)
Carol.