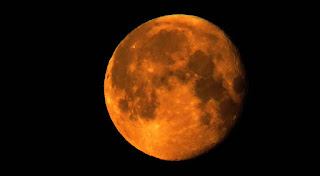 ALL PHOTOS CLICK FULL SCREEN
A view of the moon on a cold winter's night. Normally it has been grey and bleak this month but a rare fall of snow over the Scottish mountains and a couple of clear nights transformed the landscape. 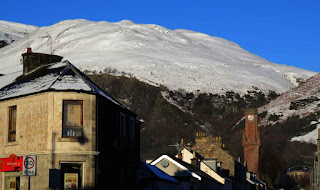 As Saturday was the first day after Friday's dump of snow we didn't fancy floundering up a big mountain with no one ahead in previous day's to break trail through the new lying white stuff as these day's I'm into making life slightly easier for myself. Enjoyment not unnecessary sweat and toil. This is myself, Alan, and his dog passing through Alva and Tillicoultry in the car  with the Ochils gleaming white above then stopping for breakfast rolls and sausage in the latter town. Very tasty. 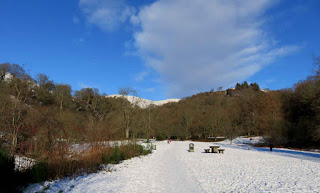 All the Ochil towns used to have mills in them during the industrial revolution and before as most of the glens on this side of the Ochil chain have fast running streams pouring down deep sided glens which was a handy source of power generation for industry. The Mill Trail runs along the bottom of this side of the Ochils visiting the necklace of small towns under the hills which still have the remains of  castles, old restored mills, and building infrastructure dating from those times. Dollar and Dollar Glen, (seen above) is probably the poshest of the five villages/ towns scattered out a few miles apart and the last in the line heading east. While the rest have comprehensive schools Dollar has 'an academy ' and very nice it is too. One of Scotland's largest independent schools. This is just the oldest building, seen two photos below, as it has several more modern extensions out of frame taking up room nearby in the grounds. 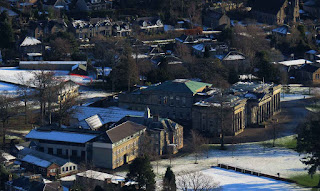 https://en.wikipedia.org/wiki/Dollar_Academy
How I first became aware of Dollar Academy was through the writing of Hamish Brown, who along with fellow hill walker Tom Weir introduced most of my age group in Scotland to the delights of the outdoors through numerous books and magazines in the local library when I was an excited teenager just getting into the hills. These two were the mountaineering superstars of that era with exciting adventures and photographs all over Scotland and abroad at a time when hill-walking over the Munros was an obscure and little known pursuit. Both contributed a lot to the popularity of Munros today with Hamish Brown being the first to complete them all in a single trip with his dog, which was also a mountaineering record breaker.
https://en.wikipedia.org/wiki/Hamish_Brown. 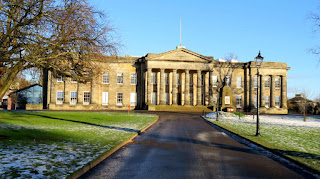 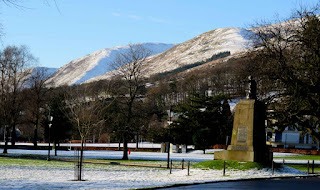 The view from the school over the Ochils. 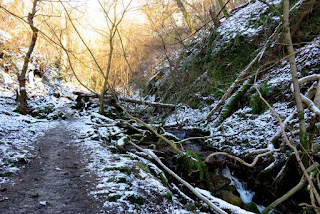 Once away from the town Dollar Glen turns into a steep gorge but a good path leads up both sides. We took the right hand one leading into the Burn of Care as I remembered it being impressive with several boardwalks and a nice deep trench higher up. 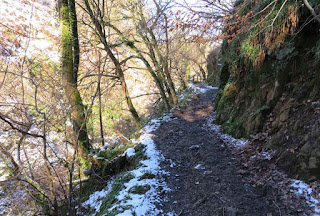 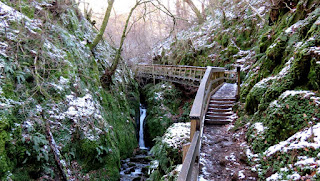 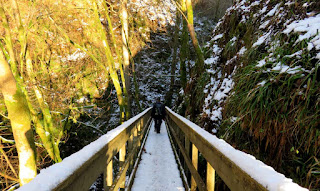 And boardwalks spanning the awkward sections. 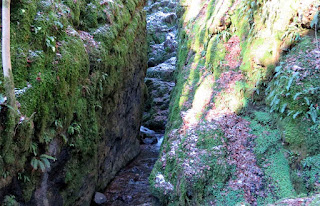 This used to be my favourite, the deep slot leading up to the Burn of Sorrow which had a similar and more exciting boardwalk curving under steep cliffs but it was shattered by rockfall from above and never replaced due to health and safety issues about 10 or 15 years ago. The left hand path now climbs through the woodland slopes above the gorge but is not as much fun as the old route through the deep slot which was epic. A touch of danger is always more exciting. 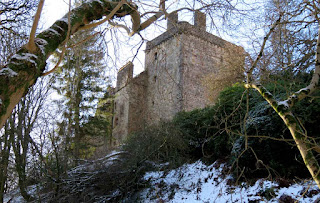 At this point Castle Campbell comes into view, looking very much like the sinister monastery in one of my favorite films ' Name of the Rose.' An atmospheric and creepy classic detective crime thriller with thoughtful reason and logic up against blind faith in the eternal battle for truth. Still relevant today. Well worth seeing.... but fear not this is just a short clip that gives nothing away.


Castle Gloom was the old name for this remote stronghold of the powerful Earls of Argyll, later renamed Castle Campbell with the Burn of Care and The Burn of Sorrow flowing out from under its flanks so a good match for the film. 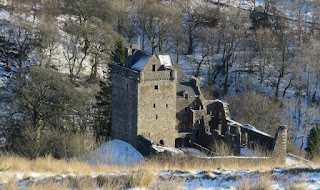 The castle from above. 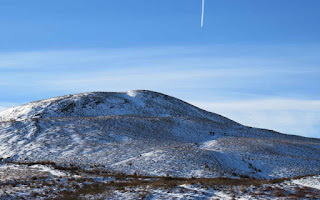 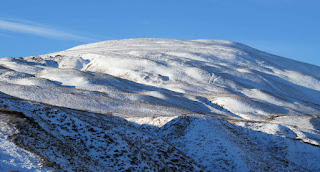 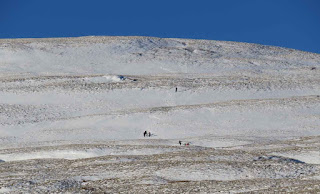 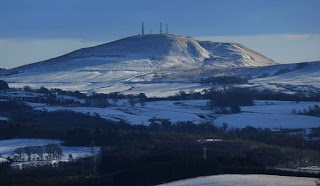 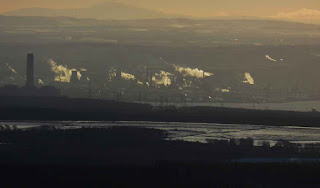 Looking across at Grangemouth. 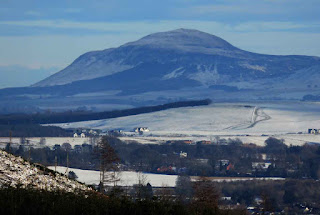 West Lomond near Auchtermuchty and Falkland in Fife. An enjoyable day out. Around 5 hours as we came back to the car via a farm track and the Dollarbank balcony trail.

Looks a great area - another I haven't really visited. At least reading your blog I can see there might just be a future past hill-bagging! ;-)

Cheek! I'm still a mountaineering titan in my prime! These Corbetts, Grahams, Donalds, Humps, Tumps, Furths, Hewitts, Deweys and Marilyns don't come with paths up them you know in many cases and are damn hard graft, even without snow.
They're also ******** never ending! Munro baggers don't know how lucky they are with only 282/3/or 4 to collect. Wait until you've got 1,217 Scottish pimples to bag on just one list alone (Marilyns) before you ho ho ho hee the lesser ranges. Titter ye not :o)

Somewhere I am fond of! Looks lovely in the snow.

Beautiful photos, and what a lovely place! I would so enjoy a nice long walk there exploring. Thank you so much for sharing.

Glad you got some snow where you live! The hills look spectacular sporting a white coat. Nice hike through the gorge to that castle.

Snow has been absent from our winter so it is lovely to see yours especially accompanied by such lovely blue skies.
Looks a very impressive and interesting walk.

Hi Anabel,
Yes,that entire area under the Ochils is lovely. You can also walk from the Woodland Park car park situated between Alva and Tillicoultry which has balcony trails leading up into Alva Glen and Mill Glen on good paths without the need to do the higher hills above. Both these glen paths are wonderful in spring or summer and easily the equal of Dollar Glen up to Castle Campbell, or you can use these balcony trails to reach and explore either town. Very reminiscent of the Lake District path network with spring lambs and yellow gorse. Stirling University also has beautiful grounds open to the public to explore and a drive in day visitor ticket car park.

Hi Linda,
yes, it's certainly got some lovely walks.

Cheers Linda W,
Snow at last here but it only lasted a few days. Another heavy dump this weekend but it melted away overnight even after a foot of fresh snow falling. Far too warm overall for this time of year but I'm not complaining as heating bills are low.

Hello Rosemary,
I must have a serious addiction to sunshine and blue skies as any day has always sparkled more with these conditions present even on a relatively boring walk and seemed drab and lifeless to me even if surrounded by adventurous terrain on a grey day.
Just the way I've always been hardwired I suppose.

What a cracking day to be out on the hill Bob! Some lovely images here, and I hadn't realised how impressive Dollar Academy is.

I've done that route up Dollar Glen a few times, including by night in frozen conditions with the ice glinting in the headtorch - very atmospheric. The view from the Ochils over what seems to be the entire central belt might not be a classic "wild country" view, but it's a fine one nevertheless.

Wonderful, Bob. Loved the style and the shots; and the first comment made me smile. I need to re-watch 'Name of the Rose' - haven't seen it for years. I like the look of Castle Campbell - one for the list, of course!

The Ochils are fine hills. I visited many times when I lived in Edinburgh; I would guess that I have climbed Ben Cleuch more times than any other hill in Scotland. So many different combinations of hills are possible and the steep sided glens are lovely. I haven't been very often since I got Ben though, too many sheep about.

Never walked the Ochils (too busy with them "bigger" hills) but everything I read tells me they have a great deal to offer. A gorge and a castle is a pretty fine combination if you ask me. Great reminder for a great film as well - I must find a copy somewhere and give it another viewing