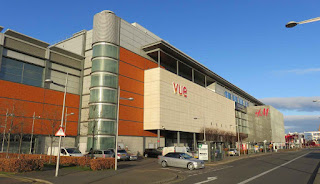 ALL PHOTOS CLICK FULL SCREEN
Ocean Terminal Shopping Centre, above. This is part two of the Edinburgh trip with Belinda and Anne when we went to Leith for the day. After wandering around Leith docks and the port buildings for the entire morning by lunchtime both Belinda and her mum were flagging somewhat. We were also needing the toilet so headed for the nearby Ocean Terminal shopping centre. 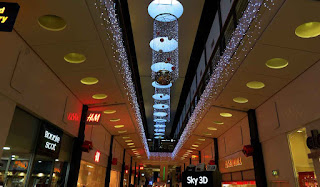 As shopping centres go this is a good one with plenty to do inside including a cinema complex, great views over Leith harbour, a small art gallery, and it's also where the Queen's old ship, the Royal yacht Britannia is permanently moored. I'd been here before a few times in the past and had also been on the Britannia but it was all new to them and we had already discussed plans and agreed to split up here. 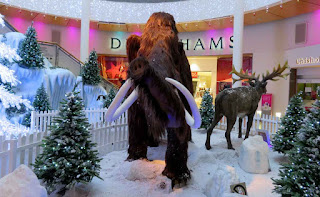 Since my last visit a whole range of moving and roaring creatures had been added, many of which were very well done and lifelike. A woolly mammoth above that swings its head and tusks. 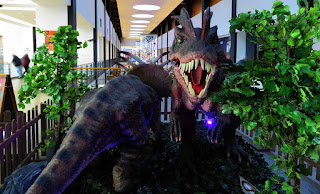 This dinosaur was disconcertingly hostile looking and could easily be used to threaten young children.
" Behave yourself ya wee bam or I'll tie you to the Velocirapter's foot!"
Actually very few of the specimens on display from that period were what we thought they would be labelled, being more fact orientated- so it's not a Velocirapter as they were the size of turkeys in reality and probably more bird like than in the film. They may even have sported feathers. 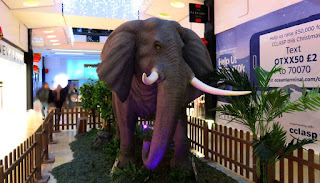 An elephant in the room. 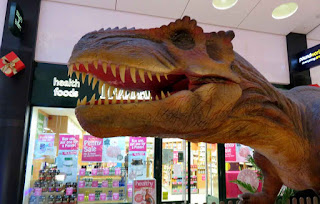 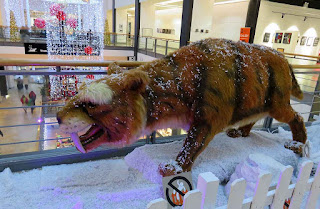 Sabre toothed pussy. About a dozen or so more not shown here in this multi level cathedral to consumerism. Belle and Anne were more than happy to stay in the shopping centre and wander around the place after obtaining a sit in meal and a coffee. I meanwhile would carry on the walk myself then meet them back at the place they were staying that evening. 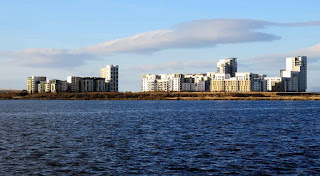 This is the view of Platinum Point from the shopping centre viewing platform. I have to admit it did look a long way around a very large harbour to get there but I was keen to see the changes to this area which has drawn me like a magnet in the past.

Three modern ships tucked into the Western harbour area so close together they looked like one. 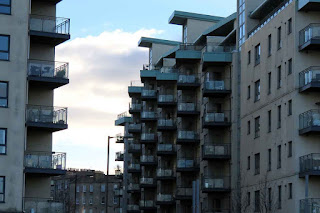 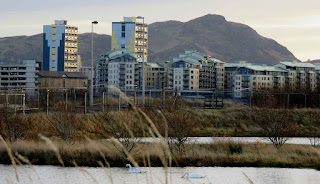 A view of the same area with Arthur's Seat behind. Part of Leith district. 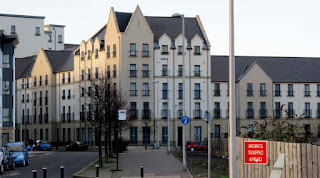 Modern housing on the way to Platinum Point. Glasgow tenements are usually 3 or 4 floors high. Edinburgh seems to favour 5, 7 or even 9 floors with a thin taller style dating back to its Baltic, Low Countries and more European influenced shipping heritage. Edinburgh's older buildings are mainly constructed in grey stone whereas Glasgow's are built of red hued sandstone, common locally in the west and seen naturally all along the Clyde coast shoreline. 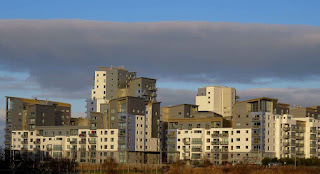 Platinum Point is different again and looks like nothing else locally- maybe that's what intrigues me so much. 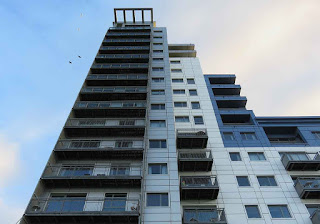 The tallest building in Platinum Point. This area is also built along a large breakwater and is surprisingly exposed to the elements with wide open sea views. Another part of the attraction for me. 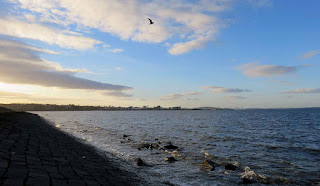 Looking out across the Firth of Forth from the West Breakwater which was originally constructed to shelter the adjacent Port of Leith docklands and ships from the notorious North Sea storms that can cause considerable damage along this exposed coast occasionally. 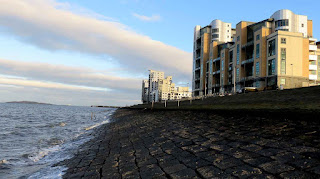 Always like to stroll along the edge of the sea here. A unique place.

Video this week is a visual mountain outdoor feast for the eyes from all over the planet and a lovely song with great violin work. Best watched full screen with the sound turned down to one quarter volume for better listening quality.

Beautiful photos and video. I love the shopping mall display!

Although I've been down to Leith a few times I've never ventured as far as Ocean Terminal (shopping centres hold no attraction for me) or Platunum Point. Maybe I will next time. I like a good, bracing walk and it looks as though this could be quite blowy! It would be a good place to live though - waterfront views and handy for the city. Not planning to leave Glasgow though!

Shopping Malls are not for me either but I can see that this one would be very good at helping to keep the children amused - a complete skull of a Wooly Mammoth was found near my home in 2005.
To my eye the low countries style of tenement is far more interesting with their high pointed gables than the flat roofed buildings.

Some cracking urban city-scapes, I like the one with Arthurs Seat in the background. Video was rather nice as well

Hi Anabel, I'm not normally a fan of malls either but that one is different and the Britannia is worth a visit. Platinum Point sits right out on a spit of land surrounded by water on both sides so it was a good place to aim for when cycling along the coastal cycle track from Cramond.

Hi Rosemary,
Two women that don't like shopping malls!? Yes, I find it surprising just how different Glasgow and Edinburgh are despite being a short distance apart on land but situated on different coastlines. It shows how much the sea routes once governed commerce and trade with other countries which is something people might tend to overlook now when exploring the growth and development of cities. Certainly when I was younger going through to Edinburgh I never really thought about that aspect of things much at all.

Cheers Andy, I try to pick stuff no one will have heard before but music and imagery that's still very interesting. Everyone has different tastes though as to what that is :o)

I always love your photos and narratives about your travels.

Cheers Linda W.
Me to with you. I never thought I'd miss snow but we have had hardly any this year at all so nice to see your photos of deep snow like we used to get every winter.

I'm super amazed to see displays like these. That's why I love going to museums. :)

Hi Lux G,
Thank you. Hope you are making the most of any opportunities yourself.
Best Wishes.