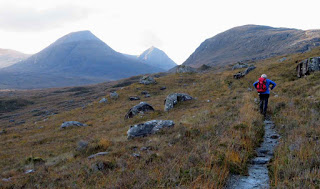 ALL PHOTOS CLICK FULL SCREEN
The second day of our trip up north was supposed to be our best shot at a higher mountain. Alex had picked Beinn a' Chearcaill lying in the remote and seldom trod wilderness between Loch Maree and the three Torridon giants of Beinn Alligin, 985 metres, (The Jewelled Hill) Liathach, 1023 metres (The Grey One) and Beinn Eighe 1010 metres. (The File Hill)  Luckily, we had a stalkers path on the way in ( thank you great estate :o) but after we reached the bealach (mountain pass) we were on our own. Any hill Alex goes up he always says " It's a fantastic viewpoint." even if its not... but on this occasion it certainly was. 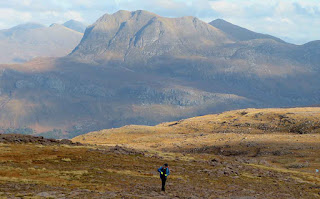 A view of Slioch, 980 metres across the hidden depths of Loch Maree. Slioch is another great isolated mountain in a remote area known as The Great Wilderness' but its probably not so wild now as it used to be 30 years ago, visitor wise, with six coveted Munros in its depths. Our peak by contrast was not a Munro and only of interest to lesser hill baggers but it turned out to be a magnificent hill nonetheless. A Graham. We never spotted a soul the entire day, even on the surrounding higher peaks. 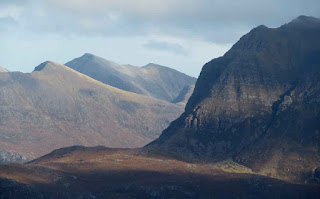 Looking in past the cliffs on Slioch into the Fisherfield area beyond. 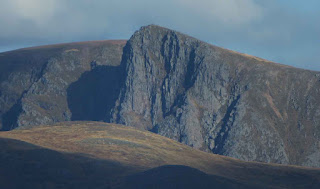 The summit cliffs of A' Mhaighdean 967 metres, (The Maiden) well named as one of the UK's remotest and hard to reach high peaks. 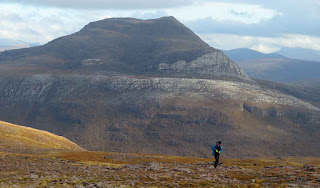 Alex with Meall a Ghiuthais, 887 metres, a Corbett, behind. We were up this adjacent hill last year I think. I also remembered I've been up it a couple of times now but its a cracking hill with a good path up it. 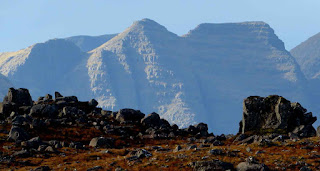 I can't say the same for Beinn a' Chearcaill, a lowly Graham which was very hard going. No signs of any path up the ridge at all just bog and boulder hopping to the top, up what felt like a never ending slope with excellent water retaining qualities. We attempted to keep to the rock as much as possible to avoid the pools and frequent puddles. Views were outstanding though. This is part of the Horns of Alligin, a fine easy scramble summer or winter on the way to the summit or on the way down as an exciting addition to the ridge. 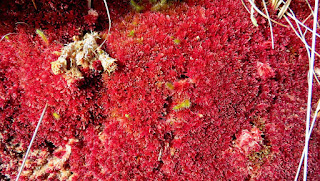 With all the summer rain this year the ground was saturated to bursting point and very slippy. Red and green moss gave some colour to a mostly grey or white stark landscape of boulders and bare rock. 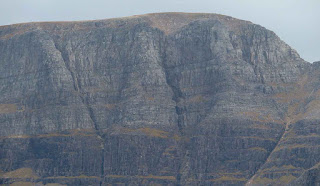 The triple buttress on Beinn Eighe looked impressive from this angle. A few remote rock climbs snake up these vertical cliffs but although low grades around Severe - VS level they are not for the fainthearted with complex route finding close up and an ability to climb harder grades if you happen to stray off line. One of the largest mountain walls in the British Isles. 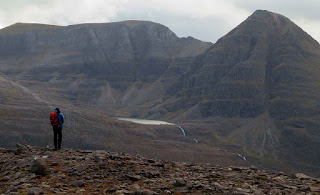 A more distant view of the same area with Coire Mhic Fhearchair a stunning walk for the more adventurous tourist to visit and explore this hidden basin after a hike from the road. 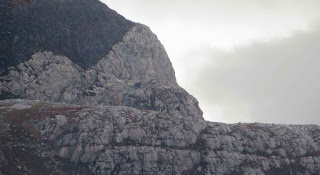 The weird rock band on Meall a Ghiuthais. Probably Lewisian gneiss or quartz  as its a very distinctive feature of these mountains with different coloured rock scraped clean by glaciers in the distant past. Even today not much vegetation grows on this type of surface. 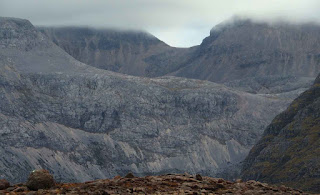 The wild wild west. Beinn Eighe in all its rugged glory. Although it had taken us a lot of effort to reach this point, and we were shattered, the surrounding hills were much higher again.
"How did we manage to do that ridge in a day?" Alex asked, looking up at Beinn Eighe's mighty bulk, summits still in the clouds. A long high ridge line of eight separate grand peaks.
We both knew the answer. The boundless energy of lost youth. Wah!!! 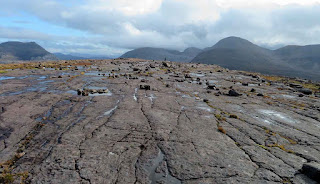 The summit of Beinn a' Chearcaill came as a bit of a shock. A real table mountain you could easily play five a side football on...and some of the best views in Scotland. A big difference to the knee destroying slopes below but maybe we didn't pick the best route up... or down.  Although it remained steadily dull and overcast where we were it didn't rain once, which was a bonus. You can just see Alex in this photo at the far end. 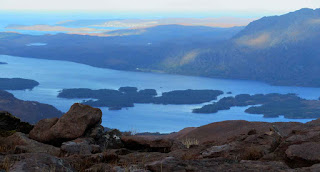 Loch Maree and its chain of magnificent islands. A well guarded sanctuary these days. The sun was over Fisherfield most of the day. 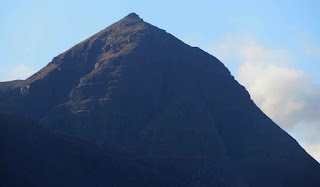 A satellite peak on Beinn Eighe, briefly in the sun. 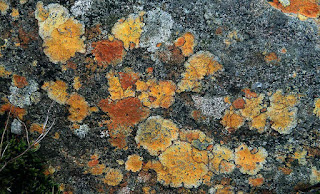 Coming back down was even harder and very slippy indeed over waterlogged ground. A smashing day out though we both enjoyed. 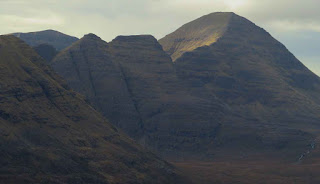 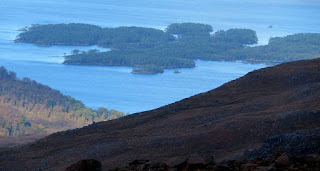 A closer view of Loch Maree.

And a great video to end with. Anyone that remembers Burt Lancaster in Elmer Gantry might see comparisons with this interesting age old tale of sin and salvation. Good song, unique singer and visual splendour as epic as the photos above, hopefully. A genuine modern classic five minute film from the USA.

Terrific views, but bogs and boulders will put me off anything these days!

What a terrific set of views Bob! Beinn a'Chearcaill has been on my "to do" list for a while after weeing some images of the summit area, but I really hadn't hooked in what a superb viewpoint the hill is....

I agree those views are outstanding, and that red moss is very dramatic - I have only ever seen green, orange and pink moss before.

Cheers Anabel,
It was an unexpectedly tough slog with all the rain but after a summer away from high hills my knees seem to have recovered a little as they were at the crunchy stage last year and causing me some pain on the descents.

Hi Ian,
Meall a Ghiuthais is a belter as well with Loch Maree views, an excellent path up the geology trail and a cracking summit. Not really any bad hills in that area, as you know.

Hello Rosemary,
Large soft beds of red moss on that hill as well as vivid green. Not sure if its different species or just minerals underneath causing the colour changes. Some of the more flamboyant lichen patterns on the rocks on that hill resembled Gustav Climt paintings with loads of reds and yellows combined.

Those fantastic views are worth the slippery climb! Your mountains are starkly beautiful. Enjoyed your recap.

Torridon - a mighty and magnificent range of mountains. I think this walk proves that the smaller and lesser known summits sometimes offer as much, if not more than the "big ones". Here a classic view into the heart of Beinn Eighe and a remarkable summit plateau. Been up the one next door but not this one. I need to take my son up to Torridon to see these giants, he'd love it. Long way from Herefordshire though. Had some classic days up here and Beinn Eighe was my very first munro back in 1984 in full winter conditions. Greatr memories rekindled so thanks for sharing

I echo the comment about "lost youth". I've come to realise that the big hills are beyond me now, still, there's plenty of interest in the smaller variety. That's what I like about lists- they encourage you (well, me at least) to go to new hills and new areas. Anyway....I haven't done Beinn a'Chearcaill but I think that you would have to go a long way to better Meall a'Ghuibhais in this area. Done it a couple of times and would go back.

Must just be the weather you've had this year I think. I've been dying to do that hill for ages. Hope I get to do it one day...

Hi Andy,
They are great mountains and you tend to forget how special they are as I'm only up there every few years- 20 years since I last climbed Eighe and Alligin.

Very true Neil,
I've certainly not got the fast reflexes or the kangaroo bounce I used to have on the descents.

Yeah Carol,
Spot on, every path I've walked this year, even the rarely trampled ones at low level are a sea of mud and swamp due to all the rain this summer.