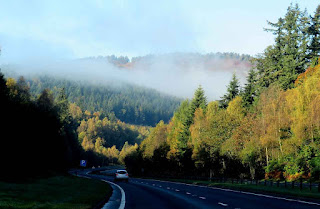 ALL PHOTOS CLICK FULL SCREEN.
A few photos from Friday's drive up towards Inverness. Thankfully Alex was driving so I could capture these. Perthshire is known for its rolling ridges and mixed forests of pine and deciduous trees- well seen here. 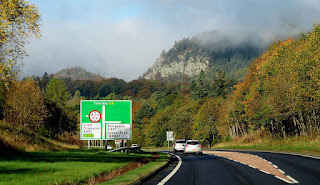 Passing the climbers crag of Polney near Dunkeld. Three cliffs known as Craig a Barns reside here offering a range of graded routes in the forest and we have both rock climbed here during our classic rock days. Sometimes together... sometimes with others in the club. 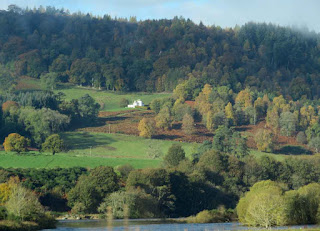 A house in rural Perthshire. While it was bright and sunny lower down the higher hills held onto mist and drizzle for most of the day. 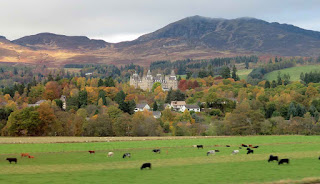 Ben Vrackie above the town of Pitlochry was just low enough at 841 metres high (2759 feet) to be clear of the mist when we passed. Nice autumn colours around the prominent hotel. 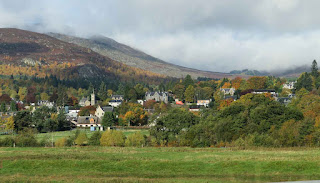 I think this is either Kingussie or Newtonmore. Didn't have a map handy at the time. 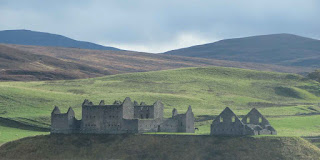 The more austere Ruthven Barracks near Aviemore. One of a number of forts built by the government across the Scottish Highlands to crush the Jacobite cause in the early 1700s and finally impose law and order over the ancient clan system. Destroyed to their present ruined state by the defeated remaining Jacobite forces themselves after they escaped the decisive massacre at Culloden in 1746 after 30 odd years of sporadic unrest. This marked the start of the end of the old highland way of life and the re-branding much later of the 'romantic highlander' image we know today - largely an invention of Sir Walter Scot through his popular novels, Queen Victoria and Prince Albert's imagination who restructured highland life to their own liking- a lot of it based on Germanic folk history as much as true Scottish reality to create the Disney like version of Scotland we see today. The Scottish Highlands were probably, arguably, the first real 'theme park'... cleared of original unruly tenants and restocked with rich landowners sitting on vast empty estates- a situation that continues to this day. For example-around half of Scotland remains owned by around 500 people, many from abroad. Not stirring it up because it doesn't bother me in any way as a city dweller, just repeating some info many might not know but be moderately interested in as food for thought. Even most Scots take the bright Highland short kilts and huge range of different tartans, the Victorian traditions and all the other tourist tat so popular around the world as genuine history when much of it was manufactured by royal patronage and Edinburgh or English tailors in the not too distant past. i.e.the Victorian era. The original highlanders apparently dressed in much same cloth designs, in  dull muted colours, and could only tell rival clans apart sometimes by their war cries, facial recognition up close, body language of intent to charge, or some other givaway- even in broad daylight. 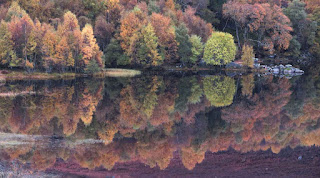 Interesting link and map here showing just how much of Scotland the Scottish people actually own. It's not in my imagination or a crackpot conspiracy theory- the richest in society do get richer every year through the tilted table effect and the ordinary taxpayer's outlay while the poorest are deliberately made poorer year on year- and its happened for centuries. You could argue it was an early land grab and with the old aristocrats fading away many of the big estates are now owned by overseas developers with no links to Scotland at all- and we pay them money for it every year it seems. Worth a look. On the plus side in 40 years of hill-walking I've never been denied access to any hills I fancied going up, on private land- I've also used the extensive network of open bothies spread across the highlands during that time, free of charge yet over in Ireland and down in England, on several farms, presumably owned by the farmer, I have been turned back and all access to the hills cut off from that direction.
https://www.theguardian.com/uk-news/2013/aug/10/scotland-land-rights 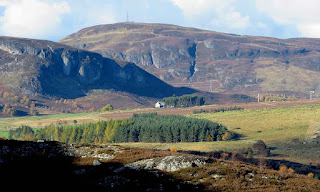 Anyway, I digress again, bad, bad me! Slap my own wrists for being an agitator-must be in the blood. This is Tom Bailgeann the second hill we ascended that same day (the one with the mast on top.) A convenient land-rover track runs up it to the summit. 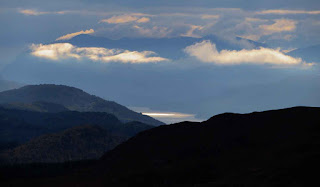 A wise decision to pick a smaller hill under 1000 feet as all the larger mountains around were covered in cloud. A sunny break here and a glimpse of something. 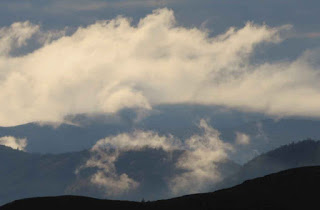 And another... and that was it. 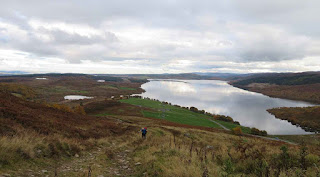 Lower down we did have good views out east over Loch Duntelchaig, seen here. 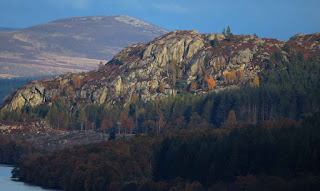 A zoom of the climbing cliffs above the loch where I went rock climbing all those years ago. Didn't realise just how many routes are situated here. Link and photo gallery. Over 100 recorded climbs now.
https://www.ukclimbing.com/logbook/crag.php?id=388 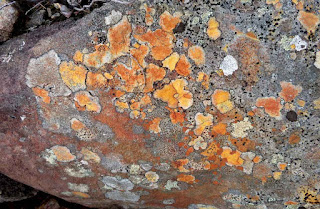 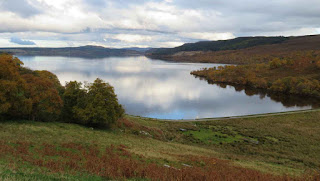 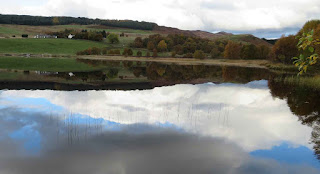 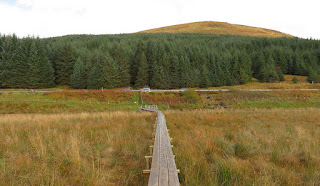 And our home for the trip. 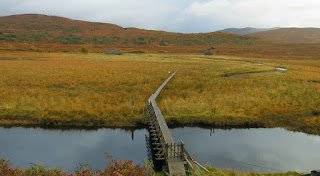 The exciting boardwalk into the hut... a wooden walkway placed over a swamp, which has been known to flood from time to time and completely submerge- the walkway that is- not the hut.

Hi Bob,
Great article and pictures! Good to see you enjoyed the Duncheltaig area. For some reason I haven't been that interested in the rock climbing around here but the hill walking is nice and it is a superb road cycling venue with a selection of loops in quiet, varied countryside.

You and Alex must be collecting a number of marilyns in your travels!

Hello Brian,
Yes, it looks good for enjoyable cycling and hill bagging. Good to see Jamie again back in the club. The rest of the Torridon and Easter Ross posts will be very familiar to you as well. I looked at Castle Leod up there and thought 'that's the setting for Outlander' Alex thought 'That's the guy that wrote the Skye climbing guide' Very different mindsets on that trip :o)

I always thought that crag past Pitlochry in the pass looked really nasty and wondered if it was a climbing crag - is it just hard grades? and is it limestone? It looks pretty serious.

Is that hut you stayed at the one down Glen Carron just past the Ledgowan?

Hi Carol,
Fairly steep routes but decent climbing on mica-schist with good starred V.diffs, Severes, VS and HVS lines up cracks. Not many limestone outcrops in Scotland just a few long caves underground in certain areas.Yes it is.

On the whole I suppose that the rich have helped to preserve our landscapes, but of course that is not entirely true of all. In particular I think of Trump and his bulldozing of large parts of one of Scotland’s rarest coastal dune habitats in order to turn it into a golf course.

Hi Rosemary,
Yes, I added a couple of lines to that part to balance it out a little. Being a boy of tiny brain I don't always get it right first time but after 4 hours of sorting photos then posting I just wanted it over with and have my dinner.

What a beautiful country we live in!

Evening Anabel,
I was thinking that today. Three stops on the train from my house and I was in really wild country with world class views 10 minutes from Glasgow.

Interesting article that you linked to. It doesn't surprise me though, rich people just keep getting richer and buying up everything in sight.

The fall colors are lovely! I enjoy seeing the wide open views and lovely scenery from your country.

As ever a great mix of great images and interesting discussion. I read that the guy who now owns a significant chunk of Jura is a thoroughly unseemly sort

Hi Kay,
I suppose I was cursed by being raised to believe in right from wrong and fairness being the desirable norm. Poor deluded me. I'm not against people having more money than others or anyone having more money than me for that matter but if most ordinary folk had even £50,000 in the bank they'd be delighted with that. However many folk with 10 billion they could not possibly spend always want 20 billion and can change the world with a single handshake and ruin countries in the process. Most of the wars started with the elite wanting more land, more power, more prestige or even just through being bored even though they had plenty already. What I object to at the moment is all these austerity cuts hitting the lower rungs and the NHS privatized by stealthy means yet austerity measures never seem to hit the higher levels of society at all. Instead they appear to be always rewarded for creating recessions through sheer greed and risky dealings then making the taxpayer foot the bill. More and more people don't trust the political system or the status quo anymore because they keep getting shafted every time which is probably why people voted Brexit, among other reasons,especially when they see the coffers completely empty for some yet a ********* cornucopia of endless riches for others holding their hand out as in the link you mentioned.
It shouldn't get to me but it does, especially when you get bull**** like " Building a country that works for everyone." Yeah, right! :o)

Cheers Linda W.
Same with your trips and walks in the USA.

Hi Andy,
It's probably because just posting chocolate box photos is never enough for me and I've got to stir it up a bit now and again to be happy. I blame the Velvet Underground and 1960s protest songs as a teenager. I have a history of sedition of the realm in my memory banks from that :o)