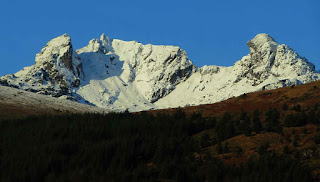 ALL PHOTOS CLICK FULL SCREEN
A day out on a newly promoted Corbett above Lochgoilhead, an isolated but beautiful village on a sea loch situated west of Arrochar and Loch Lomond. We passed The Cobbler, seen here, on the way and knew it was going to be a stunning winter outing of crystal clear blue skies and snow covered peaks. 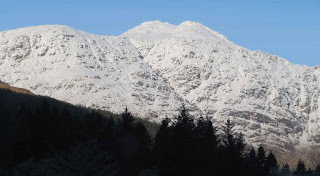 Beinn an Lochain, 901 metres, rising high above the steep sided valley of Glen Croe. Impressive metal fences line the road here to prevent further land slides as this road has been blocked several times in past years due to increased rainfall causing mud and rock slides down the mountains. A long detour is the only option when that happens. 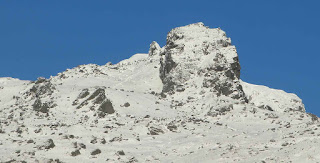 A Glen Croe view of The Cobbler cliffs and Ardgartan Arete. A classic severe rock climb in summer up the left hand peak in the first photo. You can just see a tiny person near the summit in this one (middle of skyline ridge.) 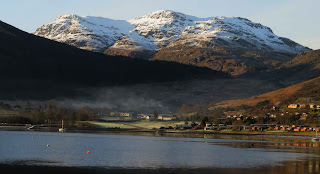 Lochgoilhead and Loch Goil. I was here with my friend John who is collecting Corbett's but both of us were surprised to see ice sheets forming on this sheltered fjord like sea loch. It hadn't reached the shoreline yet and was far too thin to walk on but you could see the process starting, probably as a result of several days of minus -5 to  minus -10 nights below zero in a row and static seawater with no wave action. 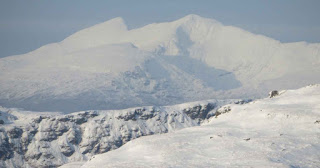 A dump of snow had also cooled the land, dropping daytime temperatures further. A view of Ben Cruachan here, one of the giants of the region at 1,126 metres, or 3, 694 feet, the highest summit in Argyll. 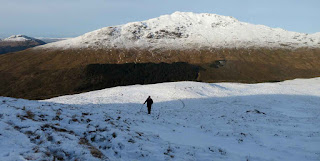 Our summit, Cnoc Coinnich, was a lowly Corbett at 763 metres, 2,505 feet, and had gained Corbett status after remeasuring. Like all west coast mountains though they give good value for that modest height with a sea level start point. Most of them are also steep sided and ringed with cliffs. 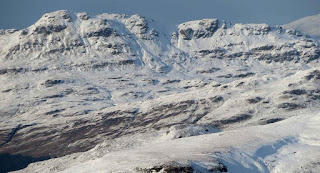 A view of a neighbouring small peak.

Down in the forests below the snow line we had also spotted a male pheasant in its bright plumage, an Indian introduction used as target practice all over the Scottish Highlands and Southern Uplands. Beautiful bird, as are all the game birds we shoot in Scotland. Could not believe how wonderful a partridge looks when I spotted one a few years ago for the first time. A doubled edged sword as they are only in this country thanks to an unlucky ability to shout their presence on taking off then flying poorly in a highly visible straight line and therefore far easier to hit than other, more evasive birds. 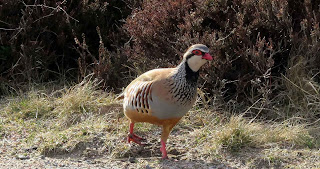 Funny how we always manage to kill off or want to own the prettiest and most precious things in existence as a trophy. When you think about it these are the UK game equivalent of Birds of Paradise. 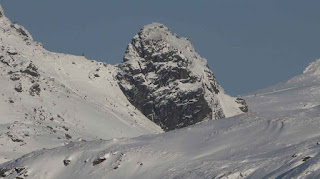 A view of The Cobbler, side on, from Cnoc Coinnich. The long distance foot path, The Cowal Way, travels through this district for around 90km from Portavadie to Loch Lomondside following a twisting line through this still largely unfrequented and mainly mountainous Cowal peninsula cut off by narrow sea lochs.
https://www.ldwa.org.uk/ldp/members/show_path.php?path_name=Cowal+Way  Info link and zoom in detailed map of the route here.

From the shoreline car park and public toilets in Lochgoilhead a signposted route leads up through pine woods and a small gorge to cross the high level pass over towards Arrochar. We followed this steeply uphill until it leveled out above the forest then made for the snow line and our summit slopes. 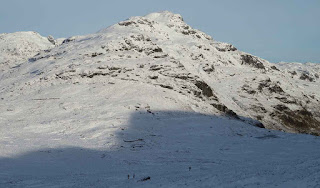 Although The Cobbler had visible hill-walkers moving on it and a usually crowded car park these days, this area has far less outdoor folk in general but there was a faint trail uphill through the snow created by Corbett baggers attracted to this peak. Anything under this list height is still largely trackless thankfully- few folk making it onto the lesser lists of hills as knees pack in, old age advances, or enthusiasm fades. A snowy Cowal Way high point in this photo above from the slopes of Cnoc Coinnich. A lone hardy winter backpacker meets two trail runners.

John on the uphill push. The snow was firm and consolidated in most places with just enough grip to avoid putting crampons on. 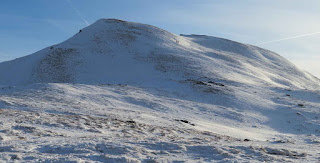 The upper slopes. Really good fun crunching up here and an easy enough angle without punishing the legs too much- ascent or descent.  This was just perfect for old guys looking for adventure without too much effort involved as some of the other hills in this district are really tough- especially in winter. 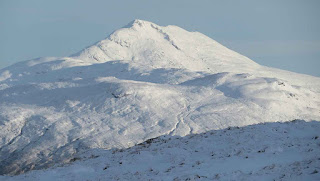 And fantastic views from the summit itself. Ben Lomond here. 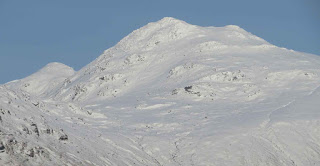 Arrochar Alps. Beinn Ime, 1011 metres, ....probably. ( It was too cold to get the map out again at this point as I was enjoying some feeling returning back into my frozen fingers for once- winter summits and keen frequent photography makes for painful extremities most of the day when its ten below zero with any wind at height.) 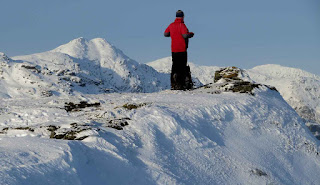 On the summit and a happy John. Another Corbett bagged. I think he's about halfway through them now.

Watched this film a while ago (on Anne's recommendation) and didn't think I would like it ( I remembered the original Danny Kaye version- not so keen on that effort) ... so was pleasantly surprised when I did, mainly because of the spectacular outdoor scenes- some shot in Iceland. It also introduced me to the growing sport of long boarding (seen here) as a bored 9 to 5 city worker, at a turning point in his life, decides to track down action photographer Sean Penn when he goes missing on an assignment and discovers adventure outdoors for himself. Best watched full screen.

Stunning pictures! Alas, I am struggling to stay upright on a flat pavement right now so this would be well beyond me.

Looks a nice new hill, well Corbett. Unfortunately, I don't seem to be able to do snow either any more (in addition to all the other stuff I can no longer do) - I did a small route the other day and was in literally screaming agony when I got back - it was only about 4 inches of snow too and a 6 mile walk up a small hillside.

I'd agree that is Beinn Ime - I know as I had to do it twice as we went to the wrong summit the first time and had to do it again. One of my favourite winter hills in Scotland though as it's so easy and gentle.

The sea froze on Uist in 1976 too - a terrible winter - even worse than this one!

Hi Anabel,
It's far easier walking up that hill, slip wise, than Central Belt pavements right now, mainly because it's a thin sheet of ice everywhere low down but proper snow up high and if you fall over it's a soft landing. I'd imagine A and E departments in cities right now are full of urban broken bones and hardly any from hill-walkers.
Not easy getting to the hills mind you with ice covered minor roads and lay-bys.

Hi Carol,
I remember a few bad winters here. The minus 20 degree one when the River Clyde froze solid for a week right into the city centre and the Renfrew ferry acted as an ice breaker to get across- the two winters, 20 years apart, when we had ten foot deep snowdrifts in the countryside(great fun) and a couple when even the highest mountains had hardly any snow on them at all and remained green all winter.
Hope you get your hip op soon and that it goes well.

What exactly is the difference between a Corbett and a Munro? I am thinking that perhaps Corbetts are not so high or steep!
Love the image of the red legged Partidge.

Hi Rosemary,
Munros are Scottish Hills over 3000 feet in height. Corbetts are between 2,500 feet and 3000 feet, then you have Grahams, Donalds, Marilyns etc, etc... and people like my friend Alex who bag everything on the various lists and ignores anything else not on a list. It can become an obsession but I've not got the bug. These days I'll go up anything interesting and I've always been someone who did a range of other things anyway- urban city walks, coastal walks, kayaking, cycling, city parks and gardens, general tourist sightseeing stuff etc which is why I always struggle to get like minded companions to go out with as most outdoor folk seem to stick to one thing and aren't interested in anything else. Some Munros are smooth easy lumps to climb, even 4000 foot ones- many Corbetts...Grahams, Marilyns etc are really steep and hard so it's all height related rather than difficulty.

Stunning, I was very jealous over the past few days. While Scotland basked (probably not quite the right word when its way below freezing) under blue skies with deep snow, it's been awful down south, all rain and high winds. I've seen far too many posts online about glorious winter days and deep powder snow for skiing. Thanks for making me feel just a little bit worse as I contemplate a walk around my village in the rain! :)

Cheers Andy,
It was a fair dump of snow but it,s all gone again after mild weather and two days of rain. Luckily, I was out before that happened skiing across Glasgow.

Thanks for that comprehensive reply Bob.

I am Great Aunt Kay to a baby girl born in November. Her name is Corbett! It is a family name, wonder if they know the meaning?

Congratulations Great Auntie Kay,
The Corbett's are named after the man that complied the list, a Mr Corbett, who measured and selected them- likewise the man that climbed, measured and listed all the Munros- who was Sir Hugh Munro. The Scottish Marilyns are slightly different and tongue in cheek, being named after the American film star- just because it goes with the first named list of hills. Having said that I've never walked up a Marilyn yet that wasn't a lovely experience as they tend to be beautifully formed with great scenic views so aptly named and a nice tribute.