Great Cumbrae and Millport. A Winter Trip. A Gallery.

ALL PHOTOS CLICK FULL SCREEN
I've still got two Edinburgh weekend posts to come but I thought I'd squeeze in a winter solo day trip to Great Cumbrae and Millport for a change. (small island in the Firth of Clyde) 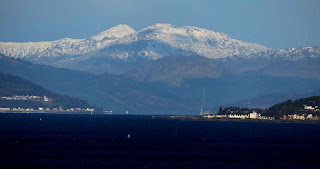 Snow had been forecast falling over the higher hills which surround this low lying fertile island so it was an ideal choice for an easy day trip without the commitment of a full blown winter adventure on the peaks. Although a sunny bright day it was bone chillingly cold with a vicious wind, so not many folk were brave enough to stay out on the open deck of the ferry for very long, even on a short sea crossing such as this one. Looking up the Firth towards Dunoon and the Argyll mountains. 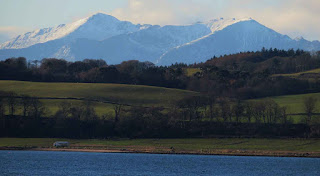 Great Cumbrae with Arran Ridge behind. I did think of a day on the Arran Ridge itself but it's a long hard outing under winter ferry timetables which meant a really early pitch black start to catch the first ferry over- a 6 to 8 hour walking day, then a night-time return. The mind was still keen but when it came right down to it the body refused to get out of bed at such an ungodly hour. 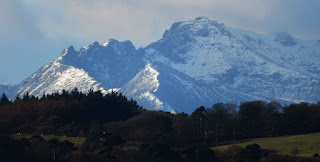 It was also a serious range to traverse in winter on my own and as I like the sun on trips away I wisely remembered all the previous times I've been walking on low lying Bute or Cumbrae in full sunshine all day while the higher Arran peaks held onto cloud, dull conditions or mist most of that time. 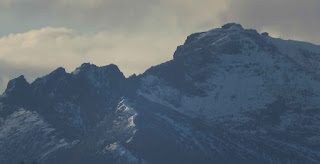 With a strong wind blowing constantly I didn't think I'd enjoy it as much as I used to up there... and I didn't enjoy it much then come to think of it. Snow is for sunshine!... not howling winds and grim dull conditions... not in my book anyway. 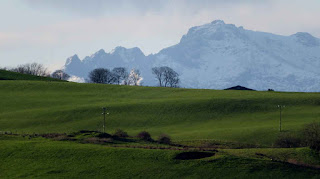 This was much better- a pleasantly green fertile island dotted with sheep, cattle, and horses... 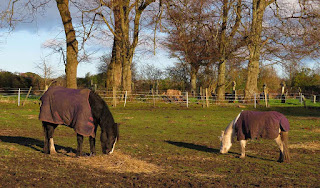 sheltered, low lying, and sunny... yet still with fantastic views of higher summits around. 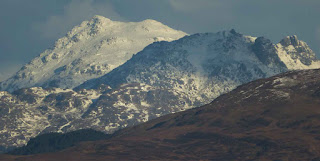 With my magnificent zoom all I needed was a cosy bed on wheels, a pipe and slippers, plus a 'push around the island' chap and I'd be sorted. Unfortunately, the bike and wheeled bed hire shop was closed for the season. This looks like The Cobbler and maybe Beinn Ime, 1011 metres, around the Arrochar district.

Young Herring Gull. Even on a sheltered island like this one sea breezes kept the temperatures below freezing so very few tourist types braved the ice coated beaches as I crunched across them. The sea was not freezing of course but the frozen wet sand and the sea bound beach streams running across it had succumbed to overnight ice. 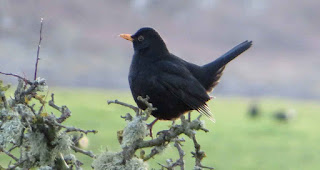 All the birds were fluffed up in an attempt to stay warm. European Blackbird here. 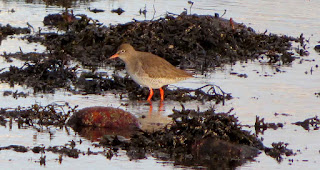 A Redshank I think. A small wading bird. Another reason I came here is that these islands usually have good wildlife in winter and birds like sunny sheltered areas as much as I do. We seem to have an affinity. 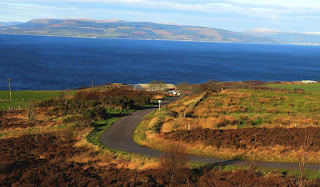 This is the minor road over the middle of the island leading to it's highest summit which then drops down into the island town of Millport. 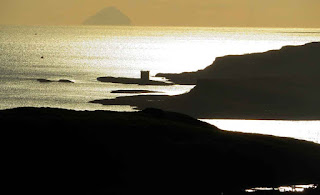 A down hill view of Little Cumbrae, Castle Island and a distant Ailsa Craig. 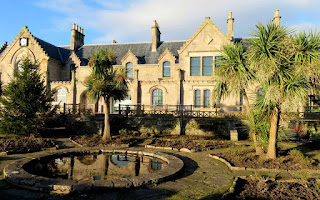 A curious rook joined me- looking half comical- half menacing with its impressive beak. I would not be at all surprised if the child catcher figure was not based on this look. 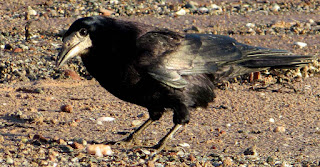 You can also see the obvious difference between rooks and crows here. Rooks have grey beaks and faces... crows are black all over. Eyes are different as well. Rooks have a cheeky sparkle in them.

Even though Great Cumbrae is a small unspoiled island there are examples of mega structures on the mainland. This is the conveyor chute for coal beside Hunterston B Power Station. Coal reserves are situated some distance away from the buildings with lines and railway infrastructure leading to container bays capturing the ship delivered coal reserves, to prevent accidental fire risk spreading towards this nuclear facility. Nearby Hunterson A closed down in the 1990s but this one has been running from the 1970s and may well last until the early 2020s all going well, despite greener energy policies kicking in-hence the two giant wind turbines situated nearby. 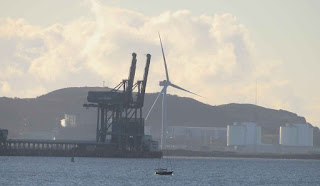 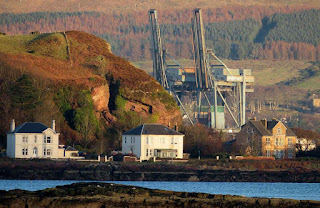 Another view from Millport itself. 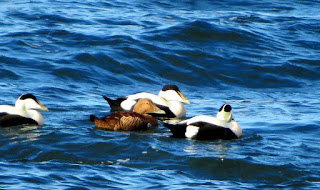 A raft of Eider Ducks. One female- three males. Just like a night out in Glasgow. 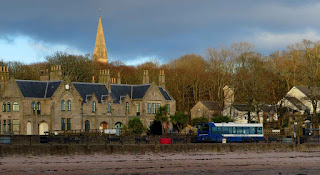 The island bus that runs between the town and ferry slipway. 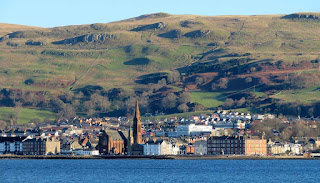 Largs from the returning ferry. 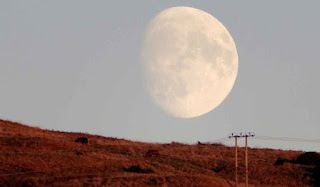 And a new full moon appearing above a herd of cows. This was not the official UK 20 percent larger 'super moon' or a 'wolf' moon (where do they get these titles?) but I was pleased with it anyway as it did look big enough to me. 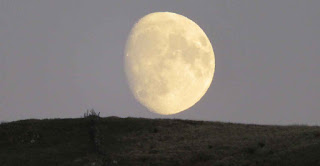 And here it is again sometime later. This one was not a 'super moon' either sadly just the ordinary kind. 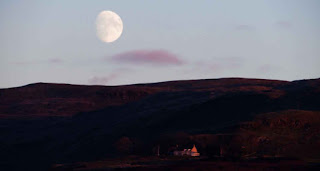 and one above a remote hill cottage. 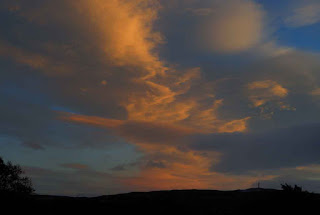 And a sunset to end.

Always liked this sweeping, very beautiful, but little known, musical classic and a great visual collection of extraordinary images gathered from around the globe. Worth a look if you like great photography and mood-scapes, which in my own small way I always try to achieve as well in the posts.

Those snow on the mountain shots are beautiful! And great moon captures too.

I haven’t been to Millport for years. Beautiful pictures.

Hi Linda,
I see there's now a 'super blue moon' coming up whatever that is. I'm still waiting for a 'rainbow moon.'... or a 'super sexy moon.' Years ago 'the moon' was all you needed, except in popular songs.

Hi Rosemary,
yes, it did look good but eye-watering cold. I was very glad I didn't make the Arran Ridge trip as it would have been wild up there.

Hi Anabel,
Pick a nice sunny windless day and you would like it. Good quiet walk from slipway on minor roads up to highest point on island then down into Millport... or get the bus(free over 60s) into Millport- plenty of short walks there as well and the Cathedral of the Isles. Even in winter its great walking and sightseeing and still less than £5 quid return. Free parking along seafront in Largs past the Gogo water.

Don't think I've been over the middle road over the summit of the island - must go back sometime. You did right to just look at snowy Arran from your sunny island. Wouldn't fancy the Arran ridges in winter myself!

Looks like you had a really good day Bob - super long range image of the Cobbler & Beinn Ime - the central peak visible from even that distance.

You're spot-on with the Redshank; one way I was taught to identify that species even in poor light (and apart from their distinctive alarm call) is that when they land Redshanks always raise their wings vertically over the back for a second before folding them

Hi Carol,
yes, you would like it- track starts up fields near the watersports centre just along from ferry slipway(signposted) then joins minor road to summit then down into Millport. Way back can be different path over fields beside town reservoirs then round the back half of island. (Maps with walking paths marked on them scattered around the island- one near slipway car park on GC.

Cheers Ian,
Almost got good photos of a green woodpecker and a jay but they are two birds that don't hang around and they turned out blurred. Only a couple of seconds earlier with the button press and I would have got them both close up and clear. Jays are buggers for avoiding you in the forest.

I'll probably be on one of the hired pedal bikes. My Mum and Dad went over that road when they hired some and my Mum fell off looking at the view and my Dad just stood laughing at her - she wasn't best pleased!

These are gorgeous shots!

Some of those zoom photos make Arran and the Southern Highlands look alpine. I'd agree they be a serious proposition in winter having walked some of the island in warmer conditions. I've heard that Great Cumbrae is well worth a visit especially on a bike

Hi Andy,
Both Great Cumbrae and neighbouring island Bute have a lot to offer. Bikes are popular on GC but not essential to get around as island is small. Bikes handy on larger Bute although buses will take you to Kilchattan for the best section of the West Island Way.