Skye in October. The Journey up.

ALL PHOTOS CLICK FULL SCREEN.
As it doesn't occur that often these days I jumped at the chance to go away with my old pals Alex and John to Skye, a large rugged island off the north west coast of Scotland. The weather forecast was not great, mist and frequent heavy showers of rain but we went anyway, hoping for the best. It turned into a fantastic trip so I was very glad we went. The journey up was impressive for its wild conditions. It had been raining non-stop overnight so by the time we left on Friday morning the streams, rivers and lochs were at full capacity. Above is a view of Buachaille Etive Mor (The big Herdsman of Etive) 1022 metres high, with water pouring down its gullies, including on the left, waterslide slab, the normal ascent finding route for the classic scrambling romp up the mountain- Curved Ridge. Not many climbers visible on this day however. 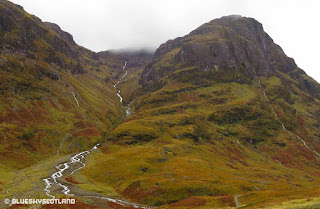 Autumn colours in Glencoe yet not a tree leaf in sight. Brown bracken and yellow grass filling in for the usual autumnal deciduous delights. Home of thunder mice, pink air squirrels, river moles and lesser spotted tree badgers. Each in its rightful place in the eco system.

As it's a long twisting five hour drive from Glasgow to Skye the perfectionist, obsessive, photographer in me had to content myself with taking shots out of the window of a fast moving car. I missed some truly incredible waterfall shots on the journey up but if I'd asked driver Alex to stop every time we passed something spectacular five hours would have soon turned into nine instead and I'd have been left hitching on the side of the road. With the window down I could see and hear the impressive thundering roar of the biggest Scottish cataracts in full voice, calling out to me to stop and capture their spurting, dancing magnificence as Scotland's greatest living amateur landscape photographer (Hey! That's me folks!... with a palm sized pocket £120 camera not a £500 plus bulky expensive job :o) passed by in a shaky blur that made clear shots almost impossible. It was all too much to take and I soon collapsed sobbing into my tear stained, flower, butterfly, and ladybird decorated pocket handkerchief, (elegant art should be in everything I own! Damn the critics!!!) rolling the window back up and covering my eyes and ears with a nearby blanket to lessen the pain. Wah!!! 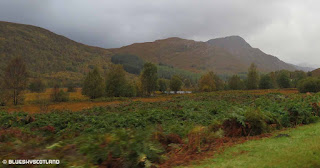 A large skein of geese, several hundred strong- this is only a third of the group- the leading edge. Painting living, ever changing patterns across the sky. Destination Unknown. But probably not Calabria... 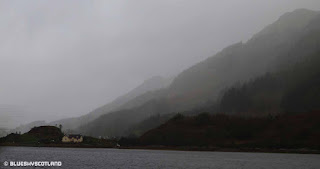 Noon in darkest West Coast Scotland. Like Transylvania it would be a desirable location for a discerning vampire as in the winter months it's dark by 4:00pm here and often earlier if the weather is grey and overcast. On this day it was changing constantly as we moved up the country- from heavy rain to mist pockets- to brief bright sunny intervals. 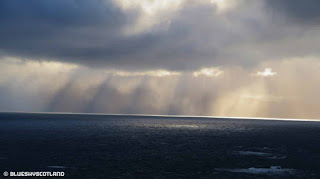 Rain squall out to sea. 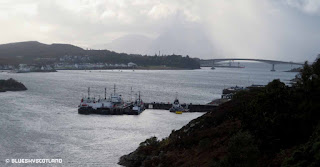 Eventually we reached Skye and Kyle of Lochalsh. The main car/passenger ferry over to the island used to leave from here but for several decades now you can simply drive across via a modern bridge, seen here. Free now after years of local protests to have the toll fare removed. In the summer months a smaller car/ passenger ferry to the island still departs from Glenelg on the Scottish mainland for those wanting a different, original method to reach 'The Misty Isle.' 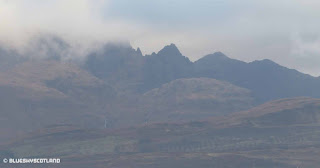 It's not called the misty isle for no reason and on this day it fully lived up to its reputation. A half hidden view of Bla Bheinn here, (The Blue Mountain) 928 metres high and the last photo page in my old well thumbed 1985 Munro book. But one of the finest and most demanding mountain traverses in the entire UK. Scrambled end to end, along the entire jagged ridge-line, a thrilling mountain chain of many knife edged summits in its own right. 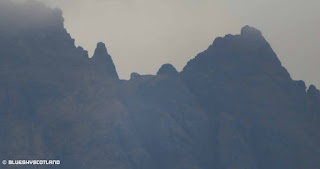 A closer view. Happy memories of younger, braver days when we still had the bottle, hard won climbing experience and leg energy for summer and winter traverses along it. Always fearful yet totally exhilarating- the closest in peacetime you can legitimately get to conflict or war. ( a fact not always mentioned in films focusing on loss and carnage is the highly addictive adrenaline rush of any situation where your life hangs in the balance. Despite the lessons supposedly learned and obvious grief afterwards throughout history countless wars have started because humans were simply bored- unsatisfied with their mundane day to day existence or slice of the pie in front of them. War is exciting, confusing, unpredictable...war is hell.... but it can also be.... fun! Thrilling and educational..."taking you out of your comfort zone" in modern terms. If you and your family survive unscathed out the other end that is. Otherwise, why would it occur so often around the world? If you lost several fingers every time you stuck your hand in a meat grinder you would soon learn to stay away from it altogether yet with wars we seem unable to resist the temptation as a society. There's always war going on somewhere around the planet.  Yet another type of dopamine drug perhaps? or a contagious virus.) 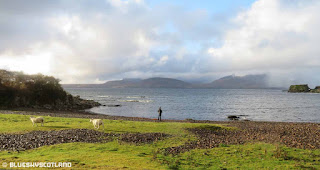 As it was too late to climb a hill that evening with sunset around 6:30pm and dark by 7:00pm we contented ourselves with a drive round to the small hamlet of Ord on the minor road system. Here we found partial views across to Bla Bheinn and closer views of the Red Cuillin- some of which we intended to climb in the days ahead. John on the beach, above. 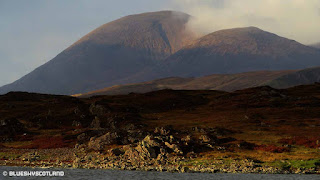 A hooded crow. A very dapper gent, like a well dressed undertaker and a true symbol of Northern Scotland where it replaces the ubiquitous all black carrion crow found throughout the rest of Britain. By this sight alone you could guess the general location- usually the Scottish western mainland and offshore islands. 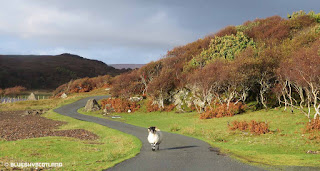 A lone sheep at Ord in late evening sunlight. 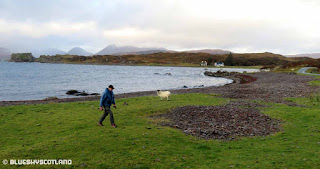 Alex walking back from the rocky beach- wriggling stone fish for dinner in both paws. Living off the land. 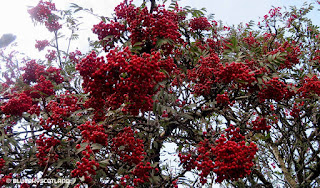 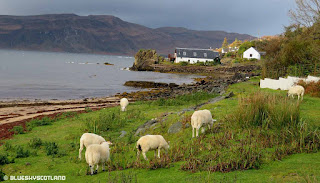 Clean sheep at Ord. Power washed by frequent rainstorms. Unlike many other materials wool actually heats up considerably when damp or soaking wet, giving them a cosy glow. Aw! 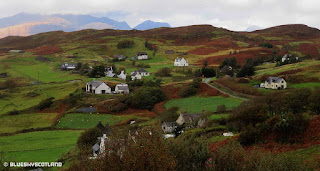 Scattered housing on the way to Ord. Skye Living. 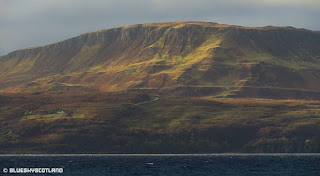 A remote house on the peninsula near Heast- Hi A and D :o) 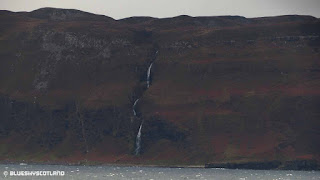 And a waterfall nearby. 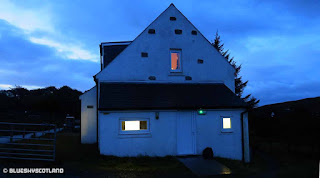 Then home for tonight in a cosy climbing hut. The best is yet to come....the Jaggy Mountains.... To be continued.

Some fabulous photographs there!

You lucky barsteward off to Skye - haven't been for a few years now! Keep missing it - especially the Cuillin...

Wars are fought because there are always too many folk living in an area fighting over too few resources!

That waterfall/slab on the left of your Buachaille photo - is that not 'The Chasm'? the gully which goes in 14 dramatic pitches all the way to the top?

Good guess Carol but The Chasm is further round facing Glen Etive. I've climbed half of The Chasm years ago but the water levels in it proved too much and scunnered us long before the end as we were both soaked and freezing cold by that point. Lower pitch was climbed through a waterfall. It's a hard long route for its grade- same with Clachaig Gully, which is even longer.Around 30 pitches long. Did not finish that climb either as by then we'd already decided epic wet gully Severes held little appeal. Wet, mossy, loose rock, and highly dangerous compared to clean, dry wall climbing.

That's why climbing came out of the gullies and onto the buttresses after all! I'd love to go and have a look at The Chasm some time after reading about it in Borthwick. How far will I get as a long scrambler?

Not that far. We were roped up from the start. Had to crawl under a hidden huge house sized iceberg first blocking the entire gully then a vertical pitch through a waterfall. That's what did for us- far too much water in it to be enjoyable or safe. But really impressive... and freezing cold despite a hot late spring day! Not called The Chasm for nothing.

You should've read your Borthwick - he said they waited all summer until it had been dry for about 10 days before they even attempted it.

Can I get to the waterfall pitch just by scrambling?

Best of luck trying to get 10 dry days in Glencoe- winter or summer.
Not up into the bigger waterfalls. no.
Q3..... HELL NO!!!! Didn't care much for it then- certainly not up to it now- neither are you. (I was climbing at my fittest then- 25 years ago- and still found it hard- better if you lead all the pitches...I'll take the photos.

I'm never, ever going to lead-climb! When I said can I get to the waterfall pitch, I mean just the first spectacular one...